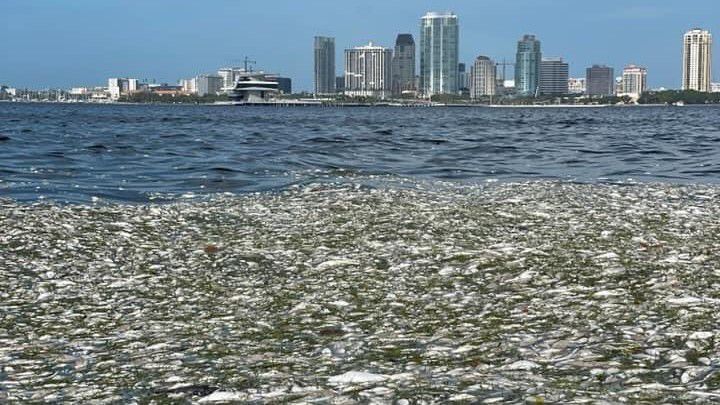 'The odor sticks to you': Mayor Kriseman says city services lagging due to red tide response

That's how St. Petersburg Mayor Rick Kriseman described it during a news conference Wednesday while also asking for help from the state with the clean up that so far has removed more than 600 tons of dead sea life.

Gov. Ron DeSantis has not said yet if a State of Emergency will be declared on the fish kill.

"Right now, it's all about clean up," Kriseman said. ""It's pretty awful. The odor sticks to you. Plus, there's the emotional toll of seeing dead animals wash up day after day."

Kriseman, Deputy Mayor Kanika Tomalin, and city administrators discussed the situation from Crisp Park, as clean up efforts went on behind them.

Officials said multiple city services are lagging behind as efforts continue to clean up fish.

Close to 200 city workers from sanitation, parks and rec, public works, police, fire and engineering are part of the clean up work.

More than 500 tons of dead sea life, a smell that just sticks to you, and a strain on city services. @StPeteFL Mayor is asking for state help to deal with impacts of red tide. Full story on @BN9 pic.twitter.com/FpndJ77RBs

City officials say over 100 miles of coastline have been impacted, with the worst areas being along the east and southeast coast of St. Pete -- Tierra Verde to Gandy Blvd.

"We've got to try and get to it as best we can, before it gets in the canals," Kriseman said. "But more help is needed if we're going to get these fish out of the water."