In this file photo from May 29, 2020, Denver Police officers square off with participants in a protest over the death of George Floyd by police officers in Minneapolis. (David Zalubowski/AP)

Sixty-one percent of Floridians agree that police use of excessive force against Blacks is a widespread problem, and 54 percent say they support the Black Lives Matter movement, an exclusive Spectrum News/Ipsos poll shows.


Yet 54% of Floridians say they disagree with a demand of Black Lives Matter: to reduce their local law enforcement department's budget to increase investment in social programs. 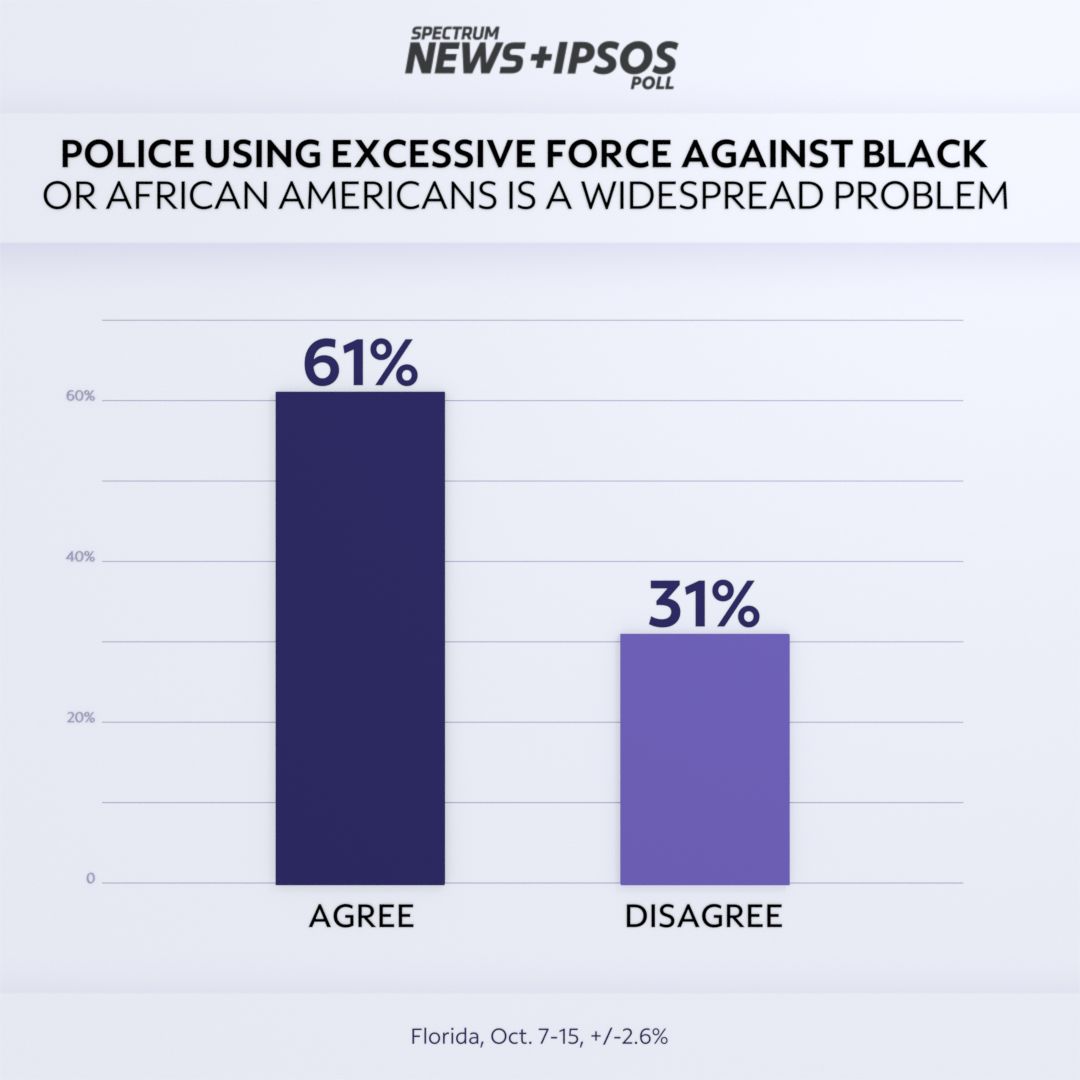 The findings come as #BlackLivesMatter continues to garner mainstream support since the May killing of George Floyd by a Minneapolis officer.

The Spectrum News/Ipsos poll asked Floridians to respond to a variety of statements on race, safety, equality, and law enforcement, plus on the effects of national protests that unfolded after the killing of Floyd and the police shooting death in Louisville, Kentucky, of Breonna Taylor, also this year. 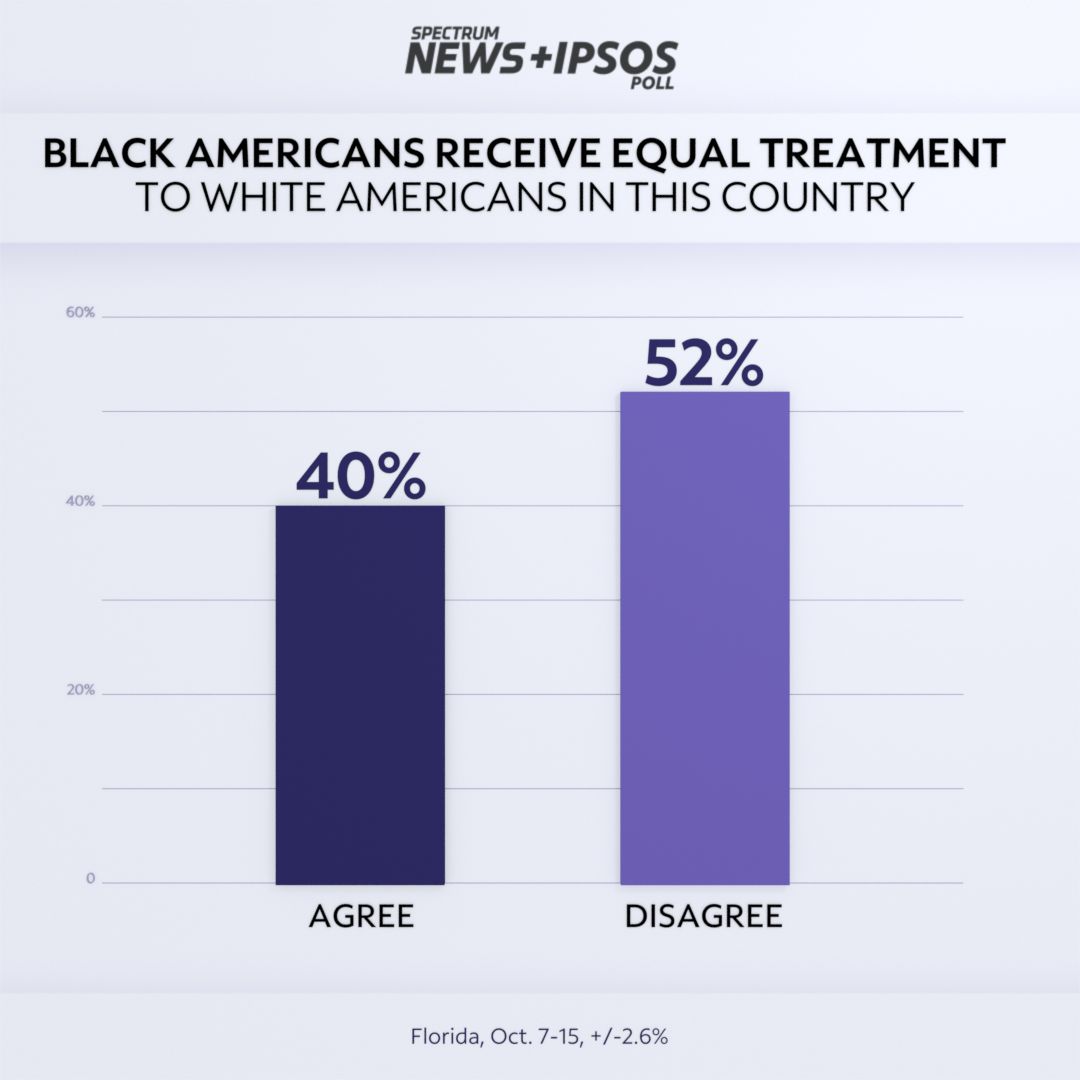 Democrats and Republicans diverged sharply on every statement, and the sentiment of political independents generally fell in between. 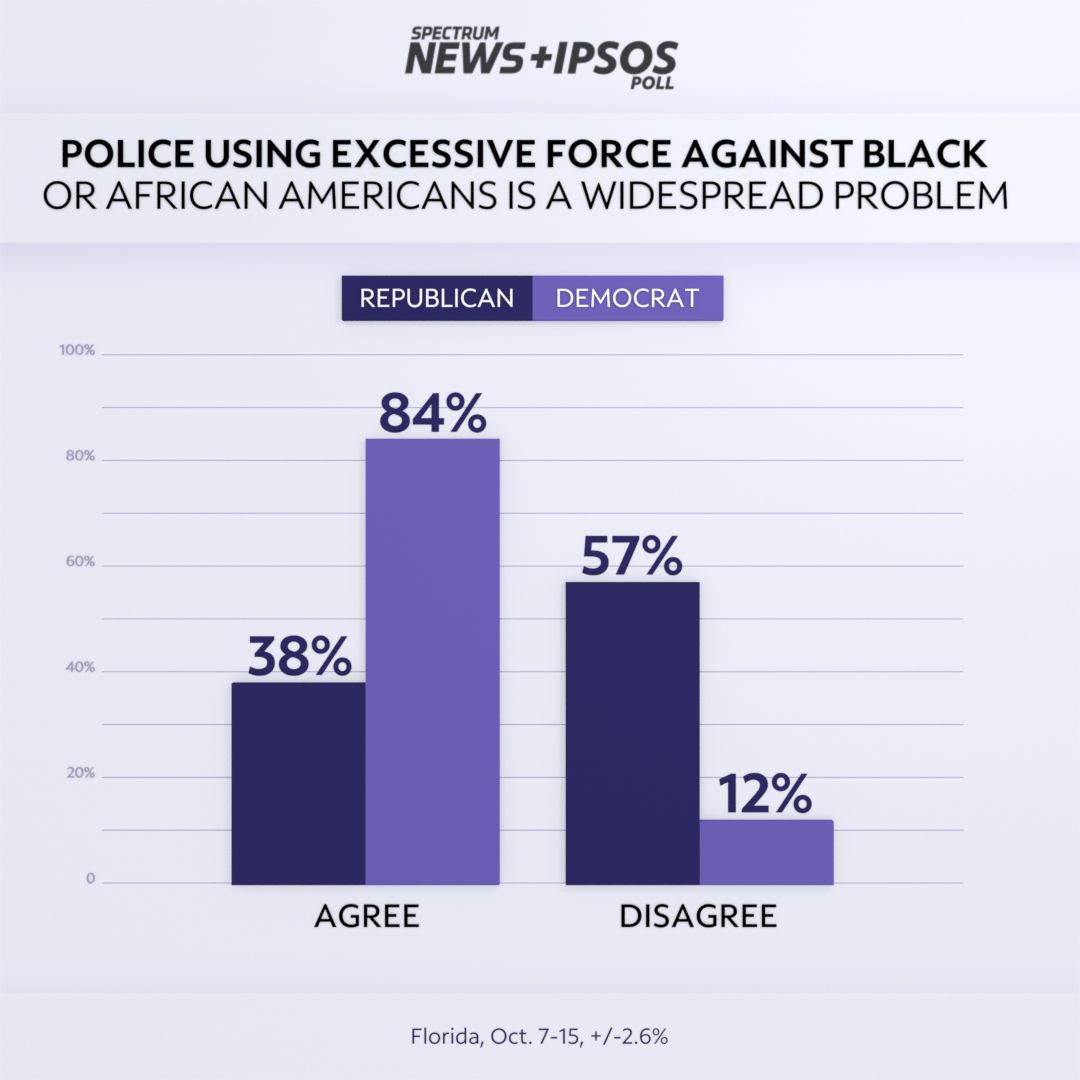 On the statement about police use of excessive force, 78% of Blacks, 68% of Hispanics, and 84% of Democrats agreed that it is a widespread problem.

That sentiment appeals to people such as Val Mobley.

“We’ve seen it too much,” Mobley, a Central Florida resident, said Thursday about use of excessive force by police. “There are so many times when things happen that the cop just needs to back off and say, ‘OK, take a deep breath. I don’t want to arrest you, so just show me your driver’s license.’”

The poll’s statement on police use of excessive force received less agreement from whites (54%), political independents (51%), and Republicans (38%).

Even fewer Republicans (29%) agreed with the statement that they support the Black Lives Matter movement. That statement received 73% agreement from Blacks and 81% agreement from Democrats. Fifty-two percent of Hispanics, 50% of whites, and 40% of political independents also agreed.

Mobley thinks Blacks “have been oppressed in this country from the get-go, and they’re the same as everybody else. People are people … We’re all in the human race.”

Like Mobley, most residents of the Orlando (57%) and Tampa (52%) designated marketing areas agreed that they support Black Lives Matter, but they showed the most divergence to that statement than to any other statement on the poll’s broader topic about race. On all other statements, respondents from the two marketing areas fell 4 percentage points or fewer apart.

Meanwhile, 65% of Democrats said they agreed that the recent protests regarding racial justice will bring about positive change in our society. Fifty-seven percent of Blacks also agreed. They were joined by 37% of whites, 29% of independents, and 24% of Republicans. 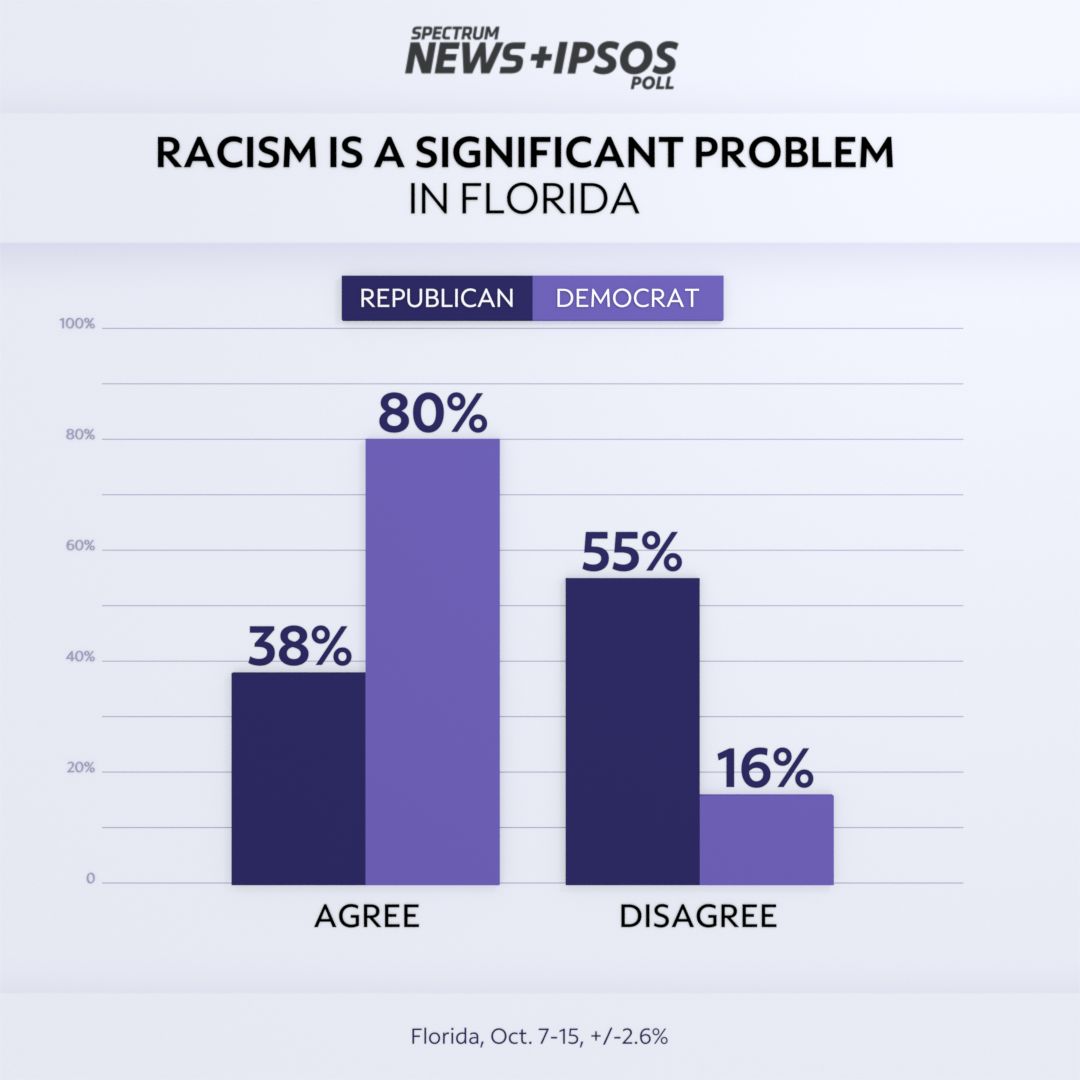 In a related question, 46% of Floridians said they approved of Gov. Ron DeSantis’s handling of protests and unrest sparked by the deaths of Floyd and others. Political party differences especially emerged here, with 27% of approval from Democrats and 74% approval from Republicans. Thirty-seven percent of independents approved. 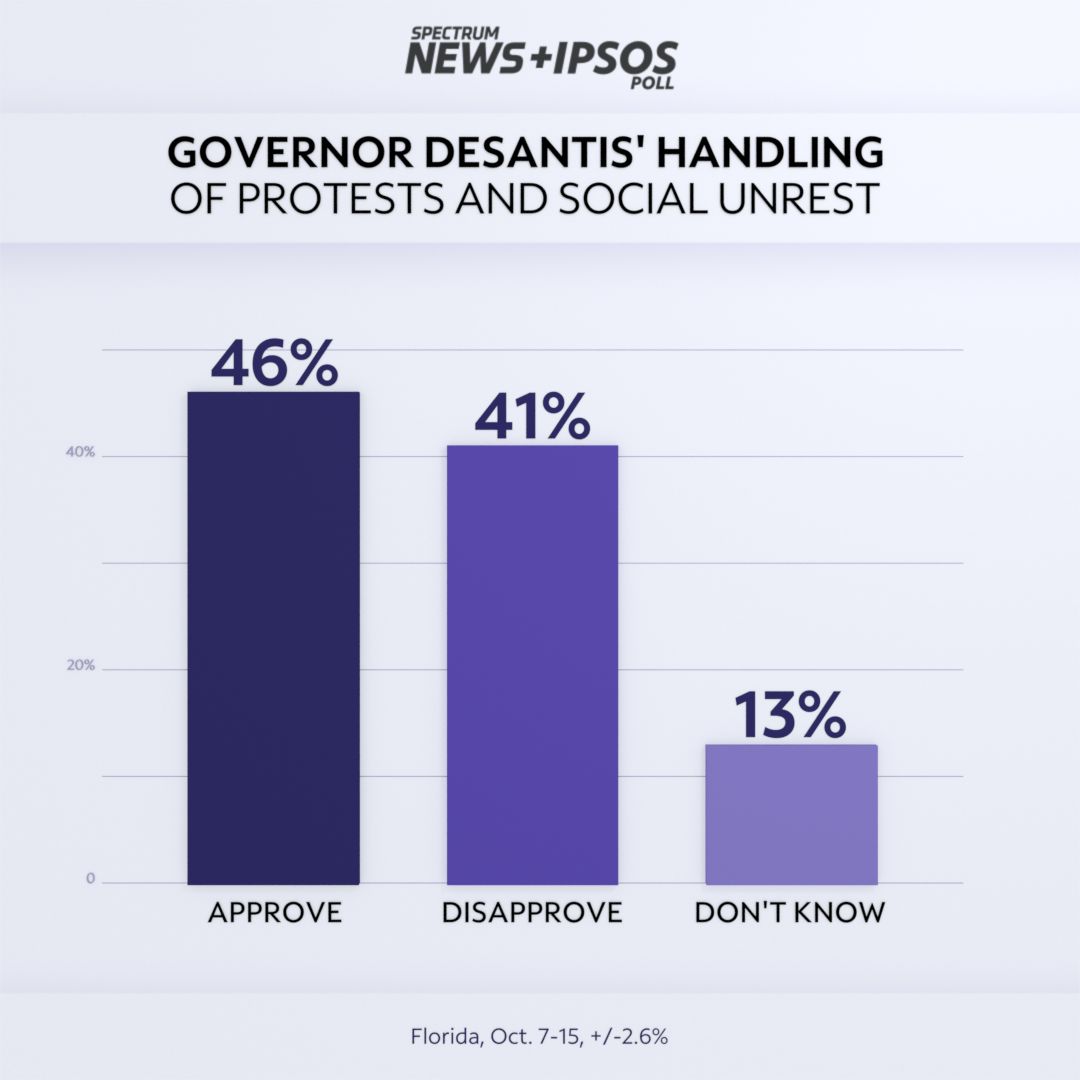 To the statement, “I support reducing my local police department's budget in order to increase investment in social programs,” 71% of Republicans and an equal percentage of Floridians age 55 and over disagreed. That also was the case for 66% of whites and 63% of independents. 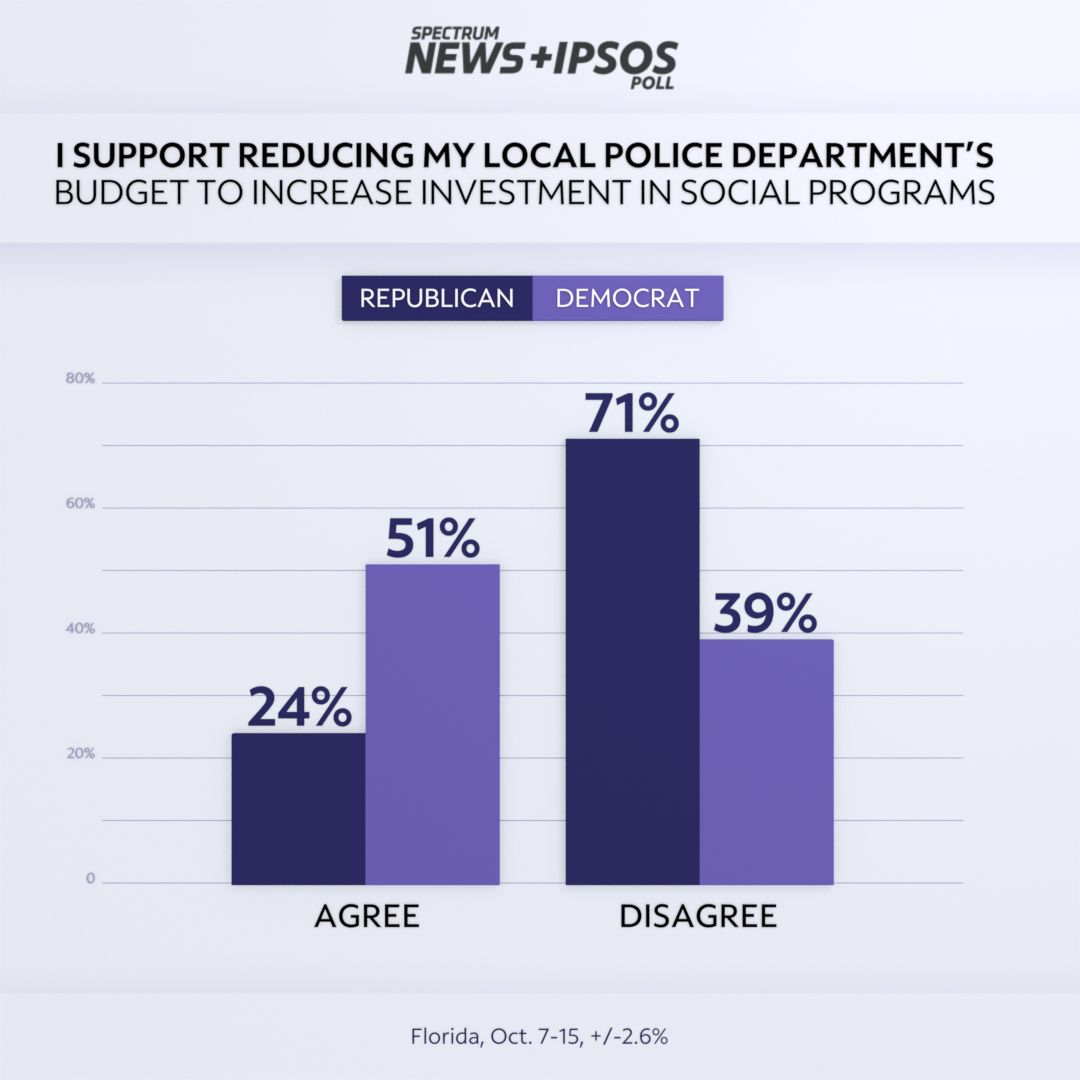 Fifty-four percent of Blacks, 51% of Democrats, and 43% of Hispanics agreed with that statement.

Mobley, the Central Florida resident, said she isn’t sure that efforts to “defund the police” are the right approach.

“I don’t think ‘defunding’ is the right way to say it,” she said. “Give them more funds so that they can hire the mental health experts that they need … You know, there are people that have been found weaving in traffic, and they’re having some kind of health emergency, and the cops don’t recognize that, so they need experts to go with them.”