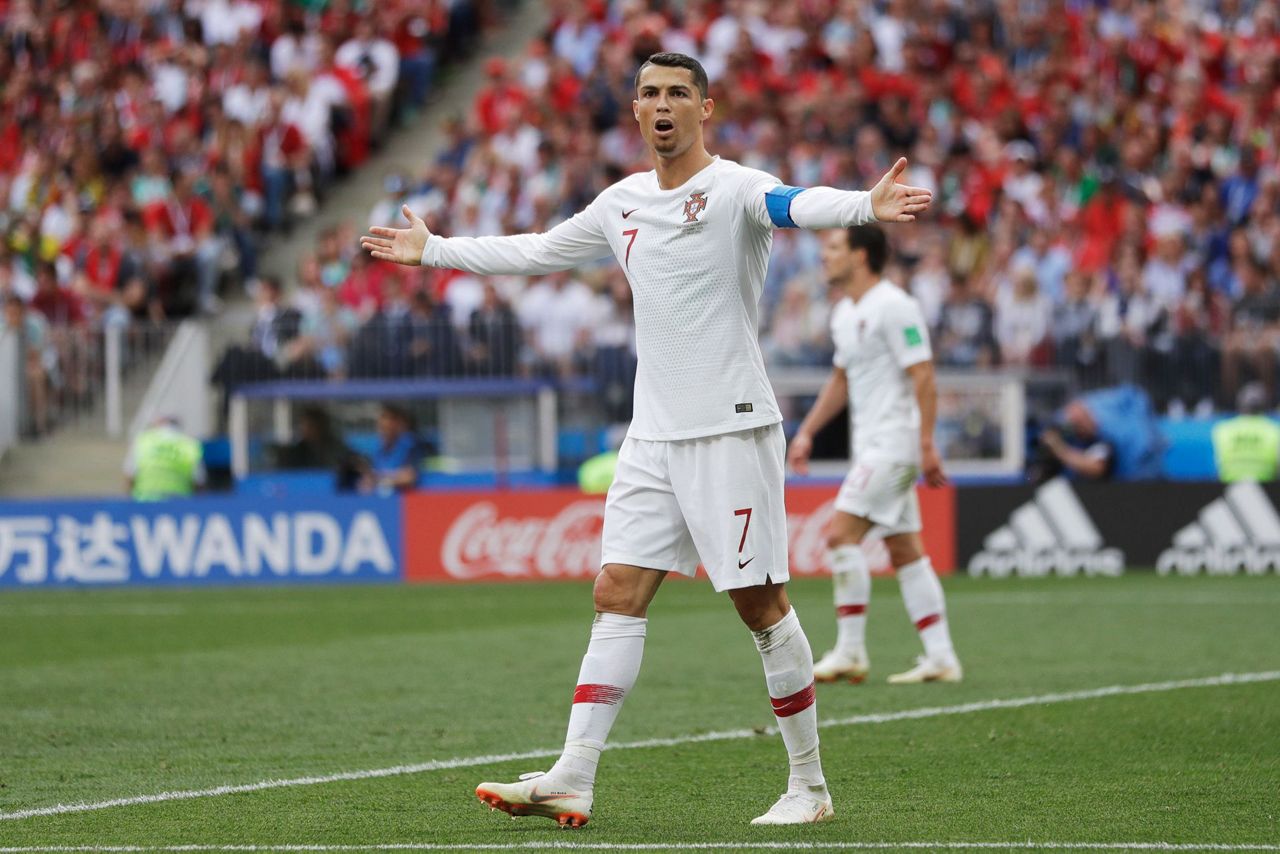 1 of 7
Portugal's Cristiano Ronaldo, center, reacts during the group B match between Portugal and Morocco at the 2018 soccer World Cup in the Luzhniki Stadium in Moscow, Russia, Wednesday, June 20, 2018. (AP Photo/Matthias Schrader) 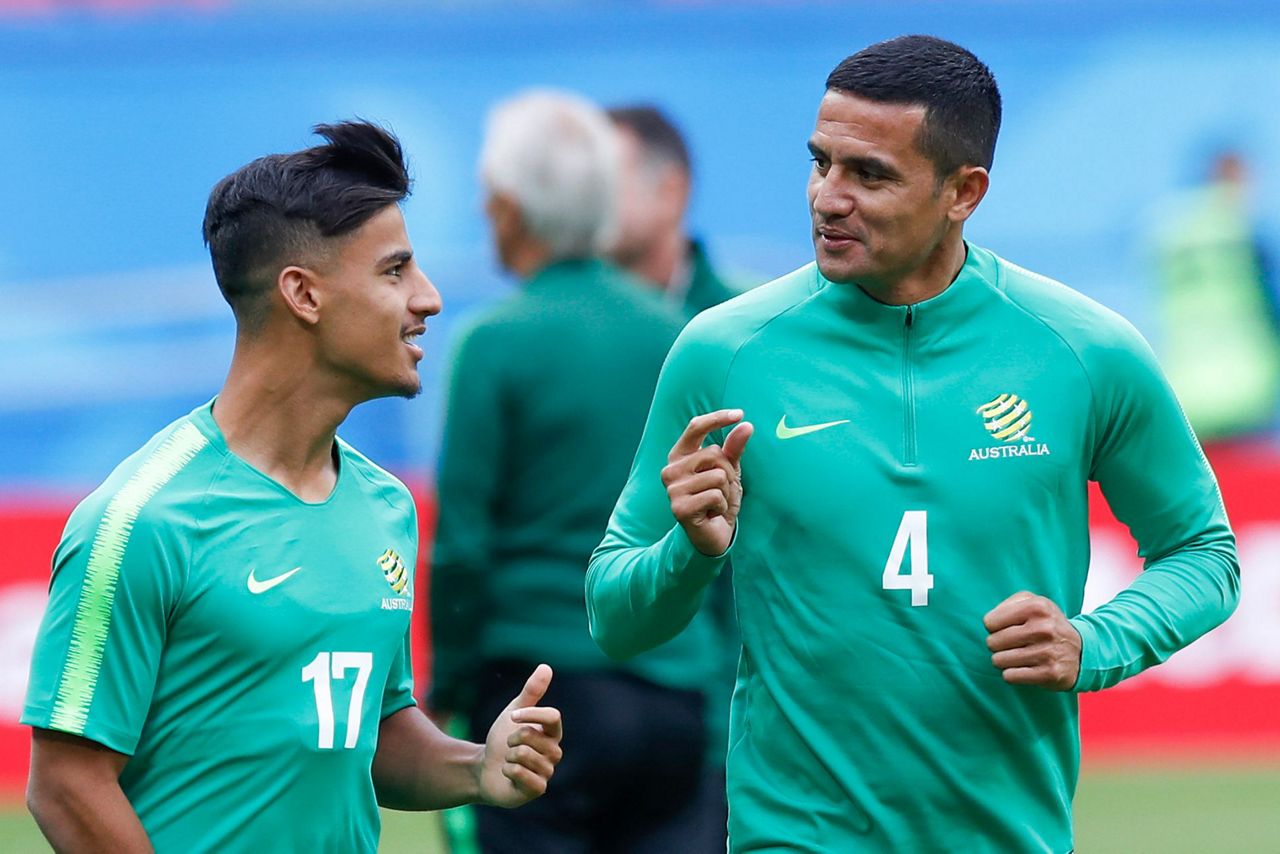 2 of 7
Australia's Tim Cahill, right, and Daniel Arzani talk during Australia's official training for the group C match between France and Australia at the 2018 soccer World Cup in the Kazan Arena in Kazan, Russia, Friday, June 15, 2018. (AP Photo/Pavel Golovkin) 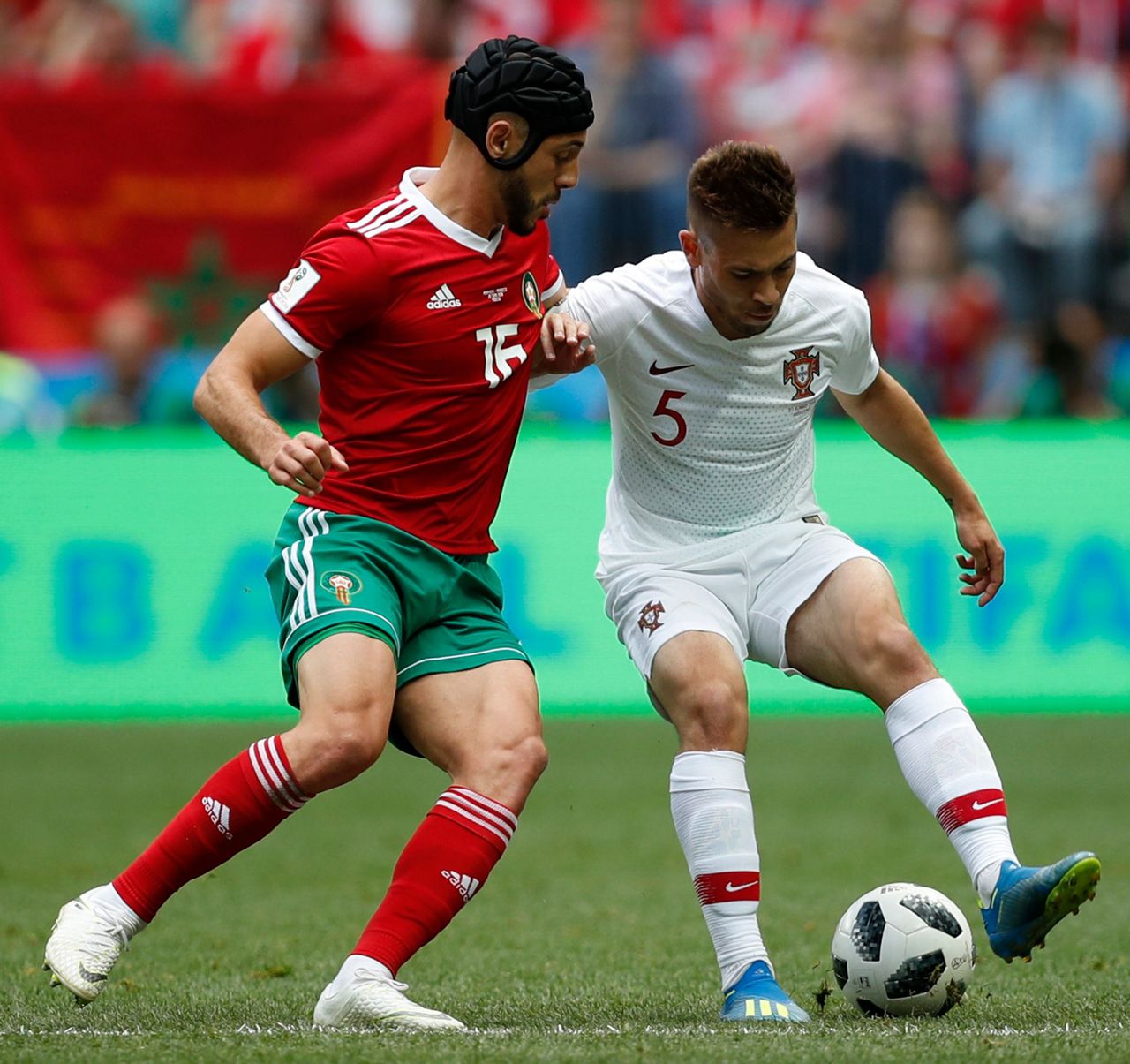 3 of 7
Morocco's Noureddine Amrabat, left, challenges for the ball Portugal's Raphael Guerreiro, right, during the group B match between Portugal and Morocco at the 2018 soccer World Cup in the Luzhniki Stadium in Moscow, Russia, Wednesday, June 20, 2018. (AP Photo/Francisco Seco) 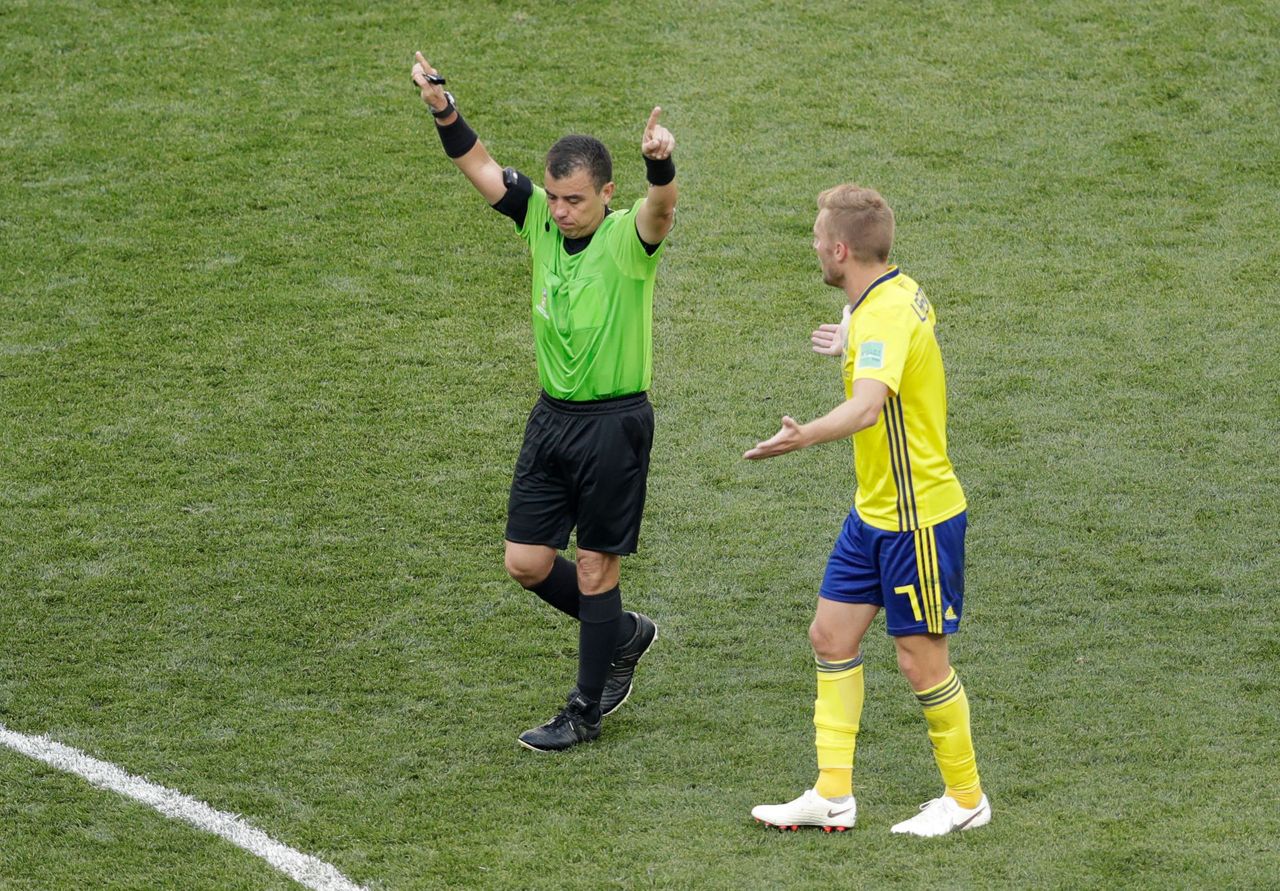 4 of 7
Referee Joel Aguilar of Salvador signals for video review during the group F match between Sweden and South Korea at the 2018 soccer World Cup in the Nizhny Novgorod stadium in Nizhny Novgorod, Russia, Monday, June 18, 2018. (AP Photo/Michael Sohn) 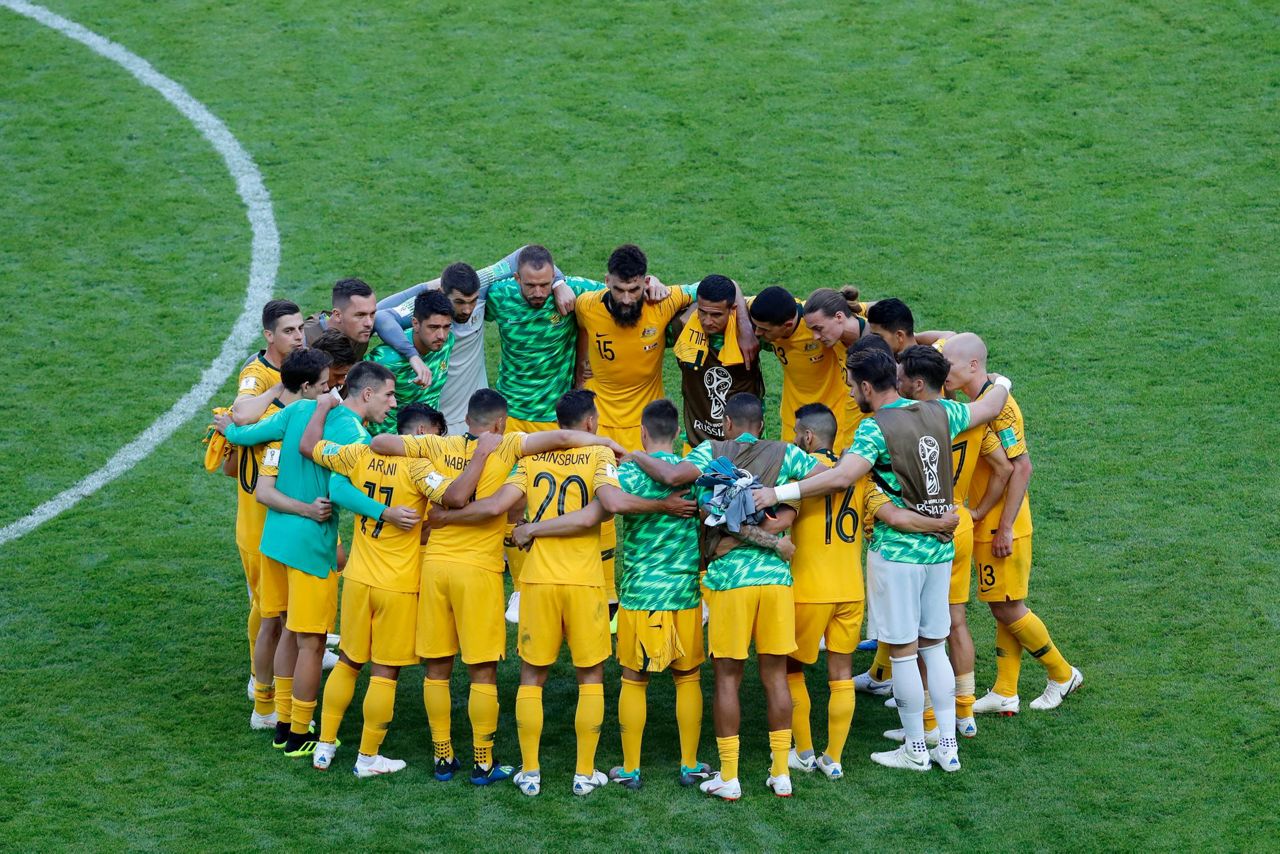 5 of 7
Australia's Mile Jedinak, center, speaks with his teammates after the group C match between France and Australia at the 2018 soccer World Cup in the Kazan Arena in Kazan, Russia, Saturday, June 16, 2018. (AP Photo/Hassan Ammar)

6 of 7
Referee Joel Aguilar of Salvador signals for video review during the group F match between Sweden and South Korea at the 2018 soccer World Cup in the Nizhny Novgorod stadium in Nizhny Novgorod, Russia, Monday, June 18, 2018. (AP Photo/Michael Sohn)

7 of 7
Australia's Mile Jedinak, center, speaks with his teammates after the group C match between France and Australia at the 2018 soccer World Cup in the Kazan Arena in Kazan, Russia, Saturday, June 16, 2018. (AP Photo/Hassan Ammar)

MOSCOW (AP) — The Latest on Wednesday at the World Cup (all times local):

Cristiano Ronaldo has made European football history by scoring in a 1-0 win for Portugal that also meant Morocco was the first team eliminated from the World Cup in Russia.

Ronaldo's header in the fourth minute was his fourth goal at this tournament, his 85th for his country, and lifted him over Hungary great Ferenc Puskas as the most ever for a European national team.

The Portugal star celebrated with a trademark run and soaring leap toward a corner flag at Luzhniki Stadium,

Morocco fell to a second straight 1-0 loss and is out of contention in last place even before Group B rivals Spain and Iran play later Wednesday.

Van Marwijk says "There's always a chance — for all the players."

The 38-year-old Cahill, who has scored 50 goals in 106 appearances for Australia, had limited playing time at club level last season and that cast some doubt over his selection in the World Cup roster. Van Marwijk included Cahill in the squad, saying he knew the veteran star's "qualities," but didn't start him in the opening 2-1 loss to France.

Cahill is aiming to join an elite club with four other players who have scored in four straight editions of soccer's top tournament.

With his hat trick against Spain in Portugal's opener, Cristiano Ronaldo joined the group. Others who have goals in four consecutive World Cups include Brazilian legend Pele and Germans Uwe Seeler and Miroslave Klose.

If Australia loses to Denmark in Samara, they will be eliminated from the knockout round regardless of their last group game against Peru.

Cristiano Ronaldo's 4th-minute goal has made the difference as Portugal leads Morocco 1-0 at halftime.

Ronaldo made European football history when he stooped to score with a powerful header from Joao Moutinho's right-flank cross after a corner.

His 85th goal for Portugal broke a tie with Hungary great Ferenc Puskas as the most ever for a European national team. Only Ali Daei of Iran, who scored 109 international goals, is ahead of Ronaldo in the world list.

Ronaldo created a good scoring chance for Goncalo Guedes in the 39th but Morocco goalkeeper Monir El Kajoui stood tall and strong to beat out the shot.

Morocco midfielder Noureddine Amrabat started the game against Portugal wearing protective headgear after he sustained a head injury in his team's opening 1-0 loss against Iran.

Amrabat had a cushioned protector similar to the one worn in recent years by Czech Republic goalkeeper Petr Cech. It didn't last long. Amrabat ripped the headgear off after a challenge early in the game, and threw it over the sideline.

The 31-year-old midfielder fell heavily, face first, to the turf in a challenge late in Morocco's opening game last Friday. Team medical staff slapped Amrabat on the cheeks before he was substituted and later treated in a hospital.

FIFA wrote to remind the Morocco team of "the importance to adhere to the guidelines that have been communicated" regarding possible concussion cases.

It is a team decision if a player is deemed fit to start a game.

Cristiano Ronaldo has scored his fourth goal at the World Cup and Portugal leads Morocco 1-0 in the fourth minute at Luzhniki Stadium.

Ronaldo stooped to score with a powerful header after he evaded his marker, Manuel Da Costa, when the ball was crossed from the right flank after a corner.

Ronaldo, who scored a hat-trick in Portugal's opening 3-3 draw with Spain, is now the all-time leading scorer for any European national team. His 85th career goal for Portugal moves him ahead of Hungary great Ferenc Puskas.

He implied he was the GOAT. Now he's grown a goatee.

Cristiano Ronaldo sported the facial hair on his chin before Portugal's World Cup match against Morocco on Wednesday.

After the first of his three goals in Portugal's 3-3 draw against Spain, Ronaldo stroked his then-hairless chin — an apparent reference to an ad featuring Lionel Messi of Argentina cuddling a live goat. The ad makes the case that Messi is the GOAT, an acronym for "greatest of all time."

Noureddine Amrabat retains his place in the Morocco team to play Portugal, days after sustaining a head injury in a 1-0 loss against Iran.

Amrabat was treated in a hospital and regarded as a doubtful starter for a game Morocco likely needs to win to have hopes of advancing.

Cristiano Ronaldo is again partnered in attack by Goncalo Guedes, despite the Valencia forward's unimpressive form in a 3-3 draw with Spain. Joao Mario starts in midfield replacing Bruno Fernandes.

Poland goalkeeper Lukasz Fabianski has finalized a move to English Premier League club West Ham while on national-team duty at the World Cup.

The 33-year-old Fabianski has left Swansea, which was relegated from the Premier League at the end of last season, to join West Ham on a three-year deal. He has made more saves than any other goalkeeper over the last four seasons in the English top flight.

Fabianksi is the back-up to Wojciech Szczesny for Poland at the World Cup and didn't play in the team's first group game, a 2-1 loss to Senegal.

FIFA is "extremely satisfied with the level of refereeing" at the World Cup, and hails the introduction of video review as a success.

The new technology system for helping referees make decisions has "on the whole ... been positively accepted and appreciated within our football community," FIFA says.

The introduction of the video review has coincided with more penalty kicks being awarded.

However, Brazil complained to FIFA about Switzerland's goal in a 1-1 draw being allowed to stand, and wanted audio recordings of communication between the match officials to be released.

England fans were bemused as to why rugby-style tackles by Tunisia defenders on forward Harry Kane at set pieces did not earn a penalty. The same video review official in that game was the referee who in an earlier game awarded a penalty to Croatia for a similar challenge by a Nigeria defender.

FIFA concedes there will "still be discussion and divided opinion" about some incidents.

Rather than risk further outrage from football fans, rights holders in Australia have agreed to keep sharing World Cup matches with free-to-air TV until the end of the group stage.

Telecommunications company Optus bought the broadcast rights for most World Cup games in Russia but technical issues with the live streaming in Australia caused a major backlash from subscription buyers — to the point where the prime minister had to intervene.

The SBS network, which retained the broadcasting rights for Australia's games and the World Cup final under a sharing agreement with Optus for the 2018 tournament, initially stepped in to broadcast all matches for a 48-hour period as the telco tried to rectify its technical problems.

The network issued a statement Wednesday saying "following further discussions with Optus ... it has been mutually agreed that SBS will continue simulcasting the 2018 FIFA World Cup until the end of group stage on June 29."

The technical issues over the first few days of the tournament included poor-quality match footage or no vision at all.

"There's no doubt this has adversely affected the Optus brand," an apologetic Lew said, "everybody is very disappointed, to put it mildly."

Lew on Wednesday said his company would continue to stream matches, but all pool matches would also be telecast on free-to-air TV.

Optus also decided to provide all Australians with free access to its streaming service, and those users who paid 15 Australian dollars ($11) to access Optus Sport during the World Cup will receive refunds.

Australia lost its opening game 2-1 to France and has group games remaining against Denmark and Peru.