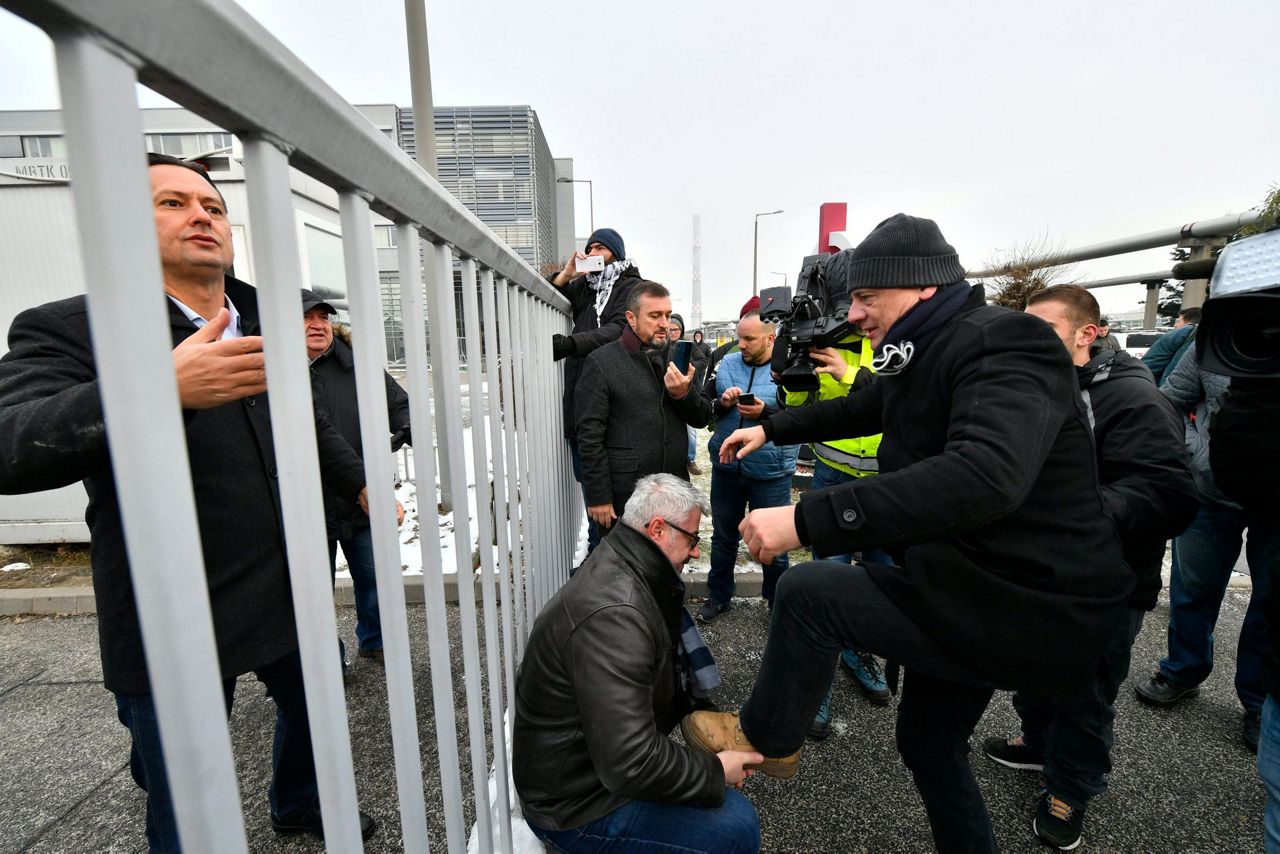 1 of 3
Parliamentary deputy of the oppositional Hungarian Socialist Party MSZP Zsolt Molnar, left, watches Democratic Coalition's (DK) deputy Zsolt Greczy, right, receiving help to climb the fence of the headquarters of the public broadcaster MTVA in Budapest, Hungary, Monday, Dec. 17, 2018. Oppositional lawmakers protest against the amendments to the labour code adopted on Dec. 12, and insist to read out their demands live in the public media. (Zsolt Szigetvary/MTI via AP) 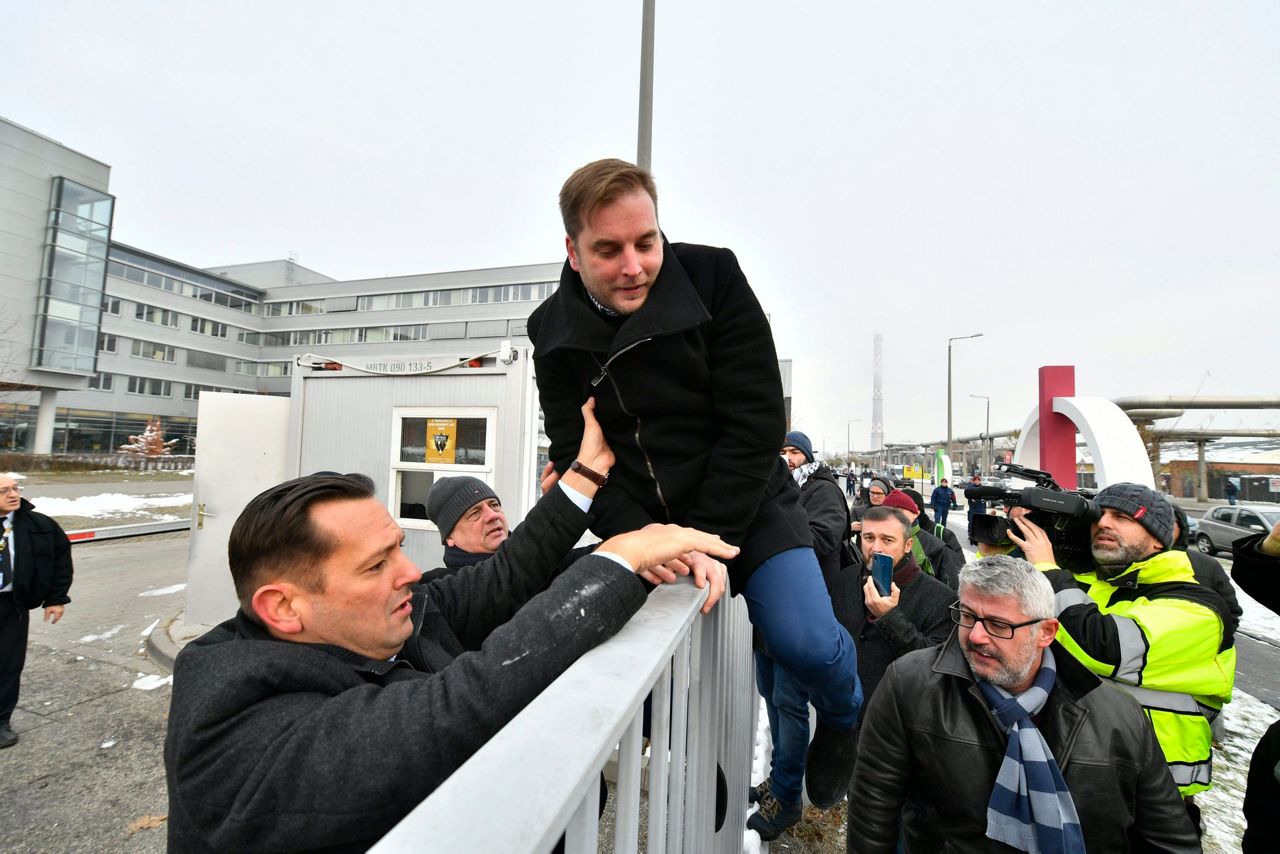 2 of 3
Parliamentary deputy of the oppositional Hungarian Socialist Party MSZP Zsolt Molnar, left, helps MSZP deputy Tamas Harangozo climb the fence of the public broadcaster MTVA in Budapest, Hungary, Monday, Dec. 17, 2018. Oppositional lawmakers protest against the amendments to the labour code adopted on Dec. 12, and insist to read out their demands live in the public media. (Zsolt Szigetvary/MTI via AP) 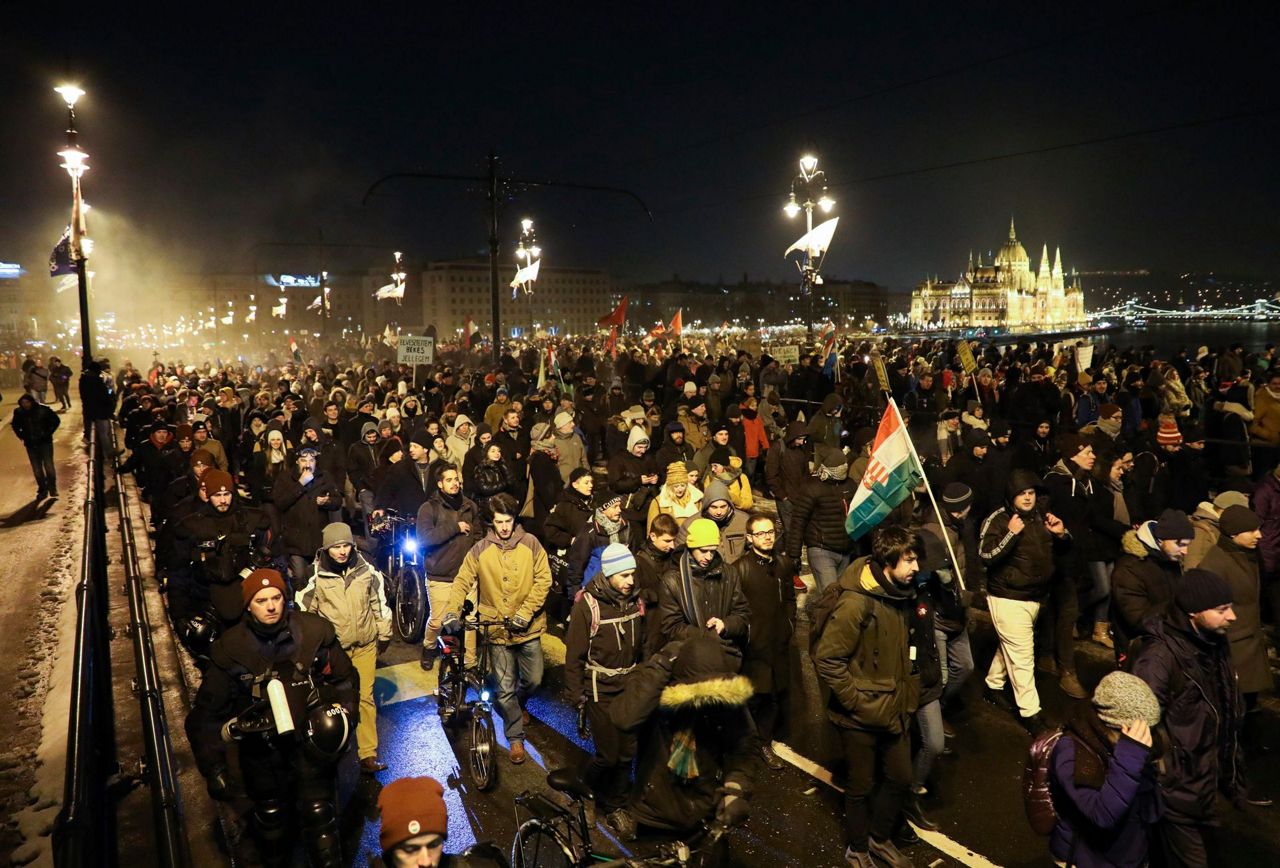 3 of 3
Anti-government demonstrators march across Margaret Bridge over the River Danube with the Parliament building in the background, in Budapest, Hungary, Sunday, Dec. 16, 2018. Protesters are demonstrating against recent changes to the labour laws. (Balazs Mohai/MTI via AP)

BUDAPEST, Hungary (AP) — Street demonstrations against recent labor law changes in Hungary appeared to wane on their sixth day, but opposition lawmakers vowed Tuesday to pursue legal and parliamentary avenues to thwart the government while allowing for a Christmastime lull.

About 150 to 200 people assembled outside the Hungarian parliament building in Budapest Tuesday evening, compared to an estimated 2,000 that confronted police a night earlier at the headquarters of state broadcaster MTVA.

One opposition lawmaker was sent to the hospital Monday after a clash with MTVA security guards; tests showed he had internal bruising, but no broken bones. Three others complained of rough treatment. Timea Szabo, a lawmaker for the center-left Dialogue party, said the opposition remained committed to fighting the government-initiated changes to overtime work laws.

She declined to give details, citing the need to both coordinate action and maintain "the element of surprise".

The main focus of the protests has been a law allowing employers to request up to 400 overtime hours from their workers annually - potentially reintroducing a six-day week - while delaying payments for up to three years.

The right-wing government of Prime Minister Viktor Orban, which won a third consecutive term in April's national election, said the overtime rules were designed to ease an acute labor shortage and to enable workers to earn more.

The government has said that working overtime will be voluntary for employees. However, critics say that in practice, the changes invite coercion of industrial sector workers who have had their rights subdued for decades.

"According to word of the law, there has to be consensus between the employer and employee. But in reality, Hungarian workers are so vulnerable (with respect) to their employers, that no one will dare say that they will not do this overtime," Szabo said.

The demonstrations that started after lawmakers approved the new labor laws have been boisterous, but largely peaceful.