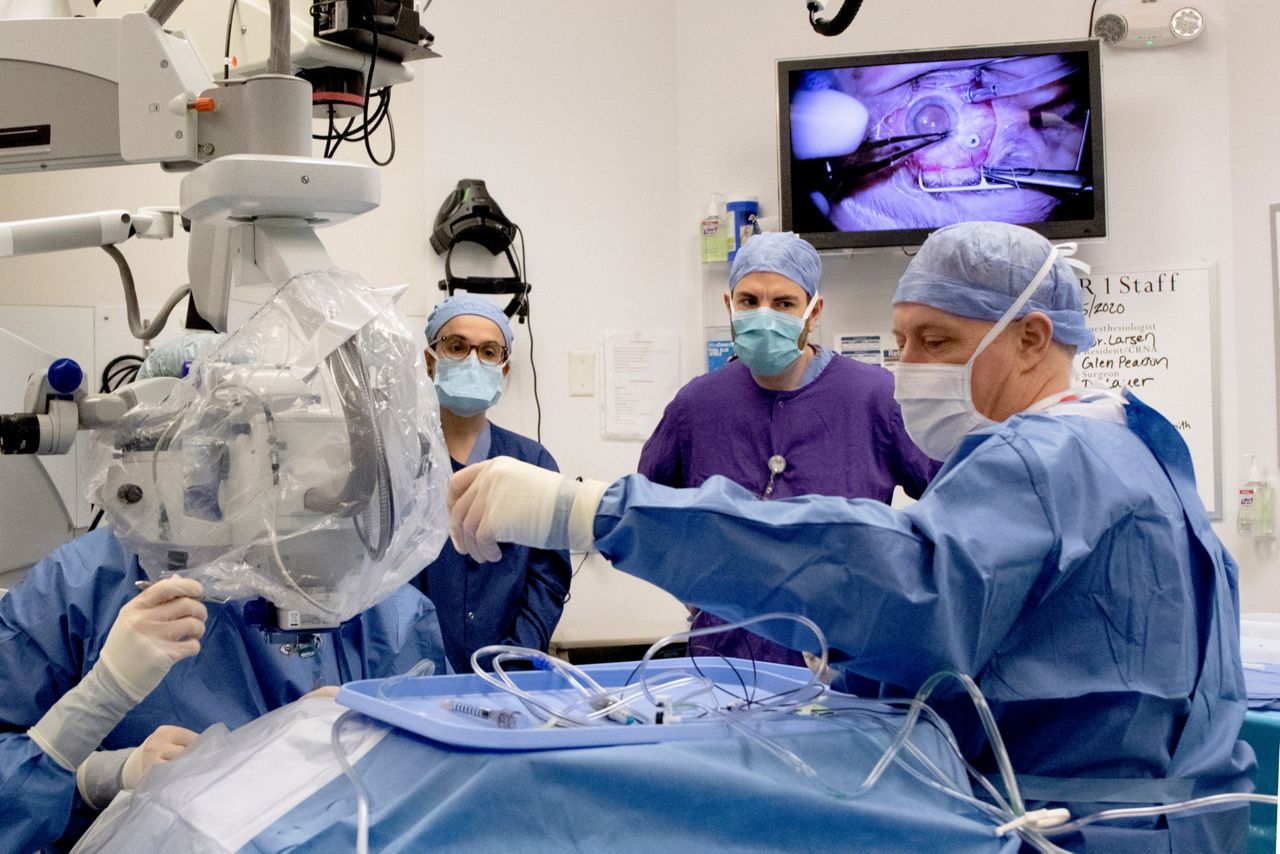 1 of 4
In this undated photo provided by the Oregon Health & Science University on Wednesday, March 4, 2020, Dr. Mark Pennesi, who leads OHSU's involvement in the trial, center right, looks on as staff at school's Casey Eye Institute perform the first-ever in vivo CRISPR gene edit procedure for the BRILLIANCE clinical trial in Portland, on a patient who had an inherited form of blindness. It may take up to a month to see if it worked to restore vision. (Kristyna Wentz-Graff/OHSU via AP) 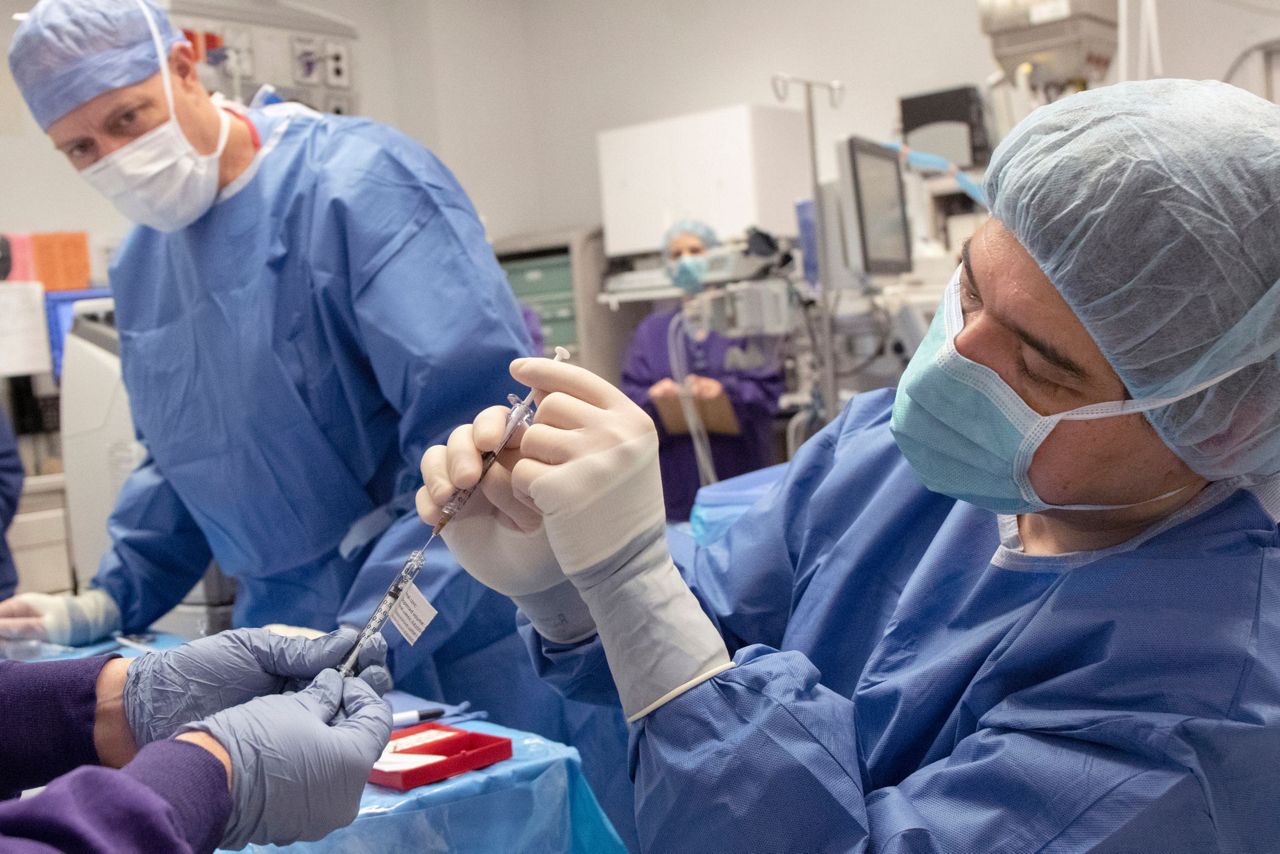 2 of 4
In this undated photo provided by the Oregon Health & Science University on Wednesday, March 4, 2020, Dr. Andreas Lauer, right, prepares to perform the first-ever in vivo CRISPR gene edit procedure for the BRILLIANCE clinical trial at the school's Casey Eye Institute in Portland, on a patient who had an inherited form of blindness. It may take up to a month to see if it worked to restore vision. (Kristyna Wentz-Graff/OHSU via AP) 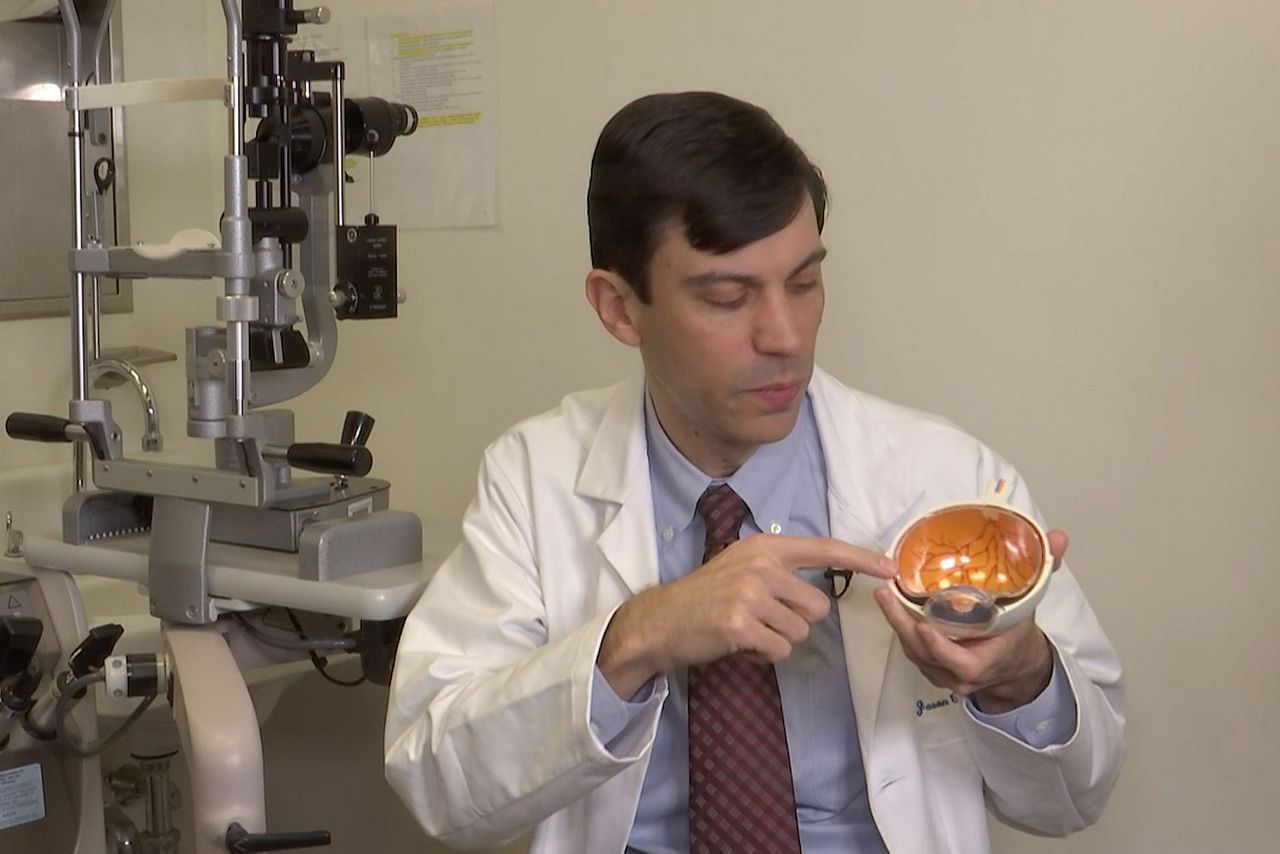 3 of 4
Dr. Jason Comander, inherited retinal disorder specialist at Massachusetts Eye and Ear Infirmary in Boston points to a model of an eye during an interview on Jan. 8, 2020. Comander's hospital plans to enroll patients in a gene editing treatment for blindness study. He said it marks “a new era in medicine” using a technology that “makes editing DNA much easier and much more effective.” (AP Photo/Rodrique Ngowi) 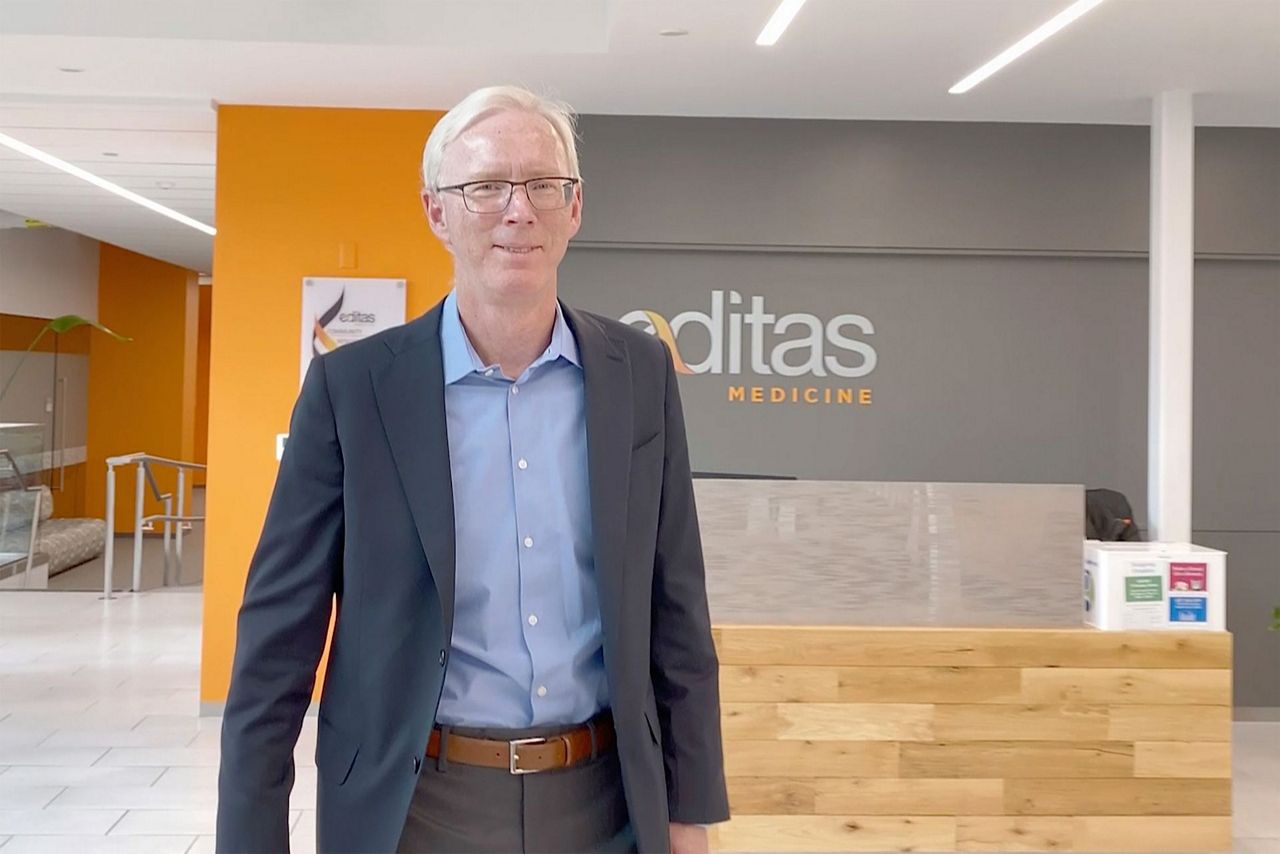 4 of 4
Charles Albright, executive vice president and chief scientific officer at Editas Medicine, a genome-editing company, in Cambridge, Mass., walks through the company's office on Jan. 8, 2020. “We literally have the potential to take people who are essentially blind and make them see,” said Albright, whose company is developing a gene editing treatment for blindness with Dublin-based Allergan. “We think it could open up a whole new set of medicines to go in and change your DNA." (AP Photo/Rodrique Ngowi)

Doctors try 1st CRISPR editing in the body for blindness

Scientists say they have used the gene editing tool CRISPR inside someone's body for the first time, a new frontier for efforts to operate on DNA, the chemical code of life, to treat diseases.

A patient recently had it done at the Casey Eye Institute at Oregon Health & Science University in Portland for an inherited form of blindness, the companies that make the treatment announced Wednesday. They would not give details on the patient or when the surgery occurred.

It may take up to a month to see if it worked to restore vision. If the first few attempts seem safe, doctors plan to test it on 18 children and adults.

“We literally have the potential to take people who are essentially blind and make them see,” said Charles Albright, chief scientific officer at Editas Medicine, the Cambridge, Massachusetts-based company developing the treatment with Dublin-based Allergan. “We think it could open up a whole new set of medicines to go in and change your DNA.”

Dr. Jason Comander, an eye surgeon at Massachusetts Eye and Ear in Boston, another hospital that plans to enroll patients in the study, said it marks “a new era in medicine” using a technology that “makes editing DNA much easier and much more effective.”

Doctors first tried in-the-body gene editing in 2017 for a different inherited disease using a tool called zinc fingers. Many scientists believe CRISPR is a much easier tool for locating and cutting DNA at a specific spot, so interest in the new research is very high.

The people in this study have Leber congenital amaurosis, caused by a gene mutation that keeps the body from making a protein needed to convert light into signals to the brain, which enables sight. They're often born with little vision and can lose even that within a few years.

Scientists can't treat it with standard gene therapy -- supplying a replacement gene -- because the one needed is too big to fit inside the disabled viruses that are used to ferry it into cells.

So they're aiming to edit, or delete the mutation by making two cuts on either side of it. The hope is that the ends of DNA will reconnect and allow the gene to work as it should.

It's done in an hour-long surgery under general anesthesia. Through a tube the width of a hair, doctors drip three drops of fluid containing the gene editing machinery just beneath the retina, the lining at the back of the eye that contains the light-sensing cells.

"Once the cell is edited, it’s permanent and that cell will persist hopefully for the life of the patient," because these cells don't divide, said one study leader not involved in this first case, Dr. Eric Pierce at Massachusetts Eye and Ear.

Doctors think they need to fix one tenth to one third of the cells to restore vision. In animal tests, scientists were able to correct half of the cells with the treatment, Albright said.

One of the biggest potential risks from gene editing is that CRISPR could make unintended changes in other genes, but the companies have done a lot to minimize that and to ensure that the treatment cuts only where it's intended to, Pierce said. He has consulted for Editas and helped test a gene therapy, Luxturna, that's sold for a different type of inherited blindness.

Some independent experts were optimistic about the new study.

“The gene editing approach is really exciting. We need technology that will be able to deal with problems like these large genes,” said Dr. Jean Bennett, a University of Pennsylvania researcher who helped test Luxturna at the Children’s Hospital of Philadelphia.

In one day, she had three calls from families seeking solutions to inherited blindness.

“It’s a terrible disease," she said. "Right now they have nothing.”

Dr. Kiran Musunuru, another gene editing expert at the University of Pennsylvania, said the treatment seems likely to work, based on tests in human tissue, mice and monkeys.

The gene editing tool stays in the eye and does not travel to other parts of the body, so "if something goes wrong, the chance of harm is very small," he said. "It makes for a good first step for doing gene editing in the body.”

Although the new study is the first to use CRISPR to edit a gene inside the body, another company, Sangamo Therapeutics, has been testing zinc finger gene editing to treat metabolic diseases.

Other scientists are using CRISPR to edit cells outside the body to try to treat cancer, sickle cell and some other diseases.

All of these studies have been done in the open, with government regulators' approval, unlike a Chinese scientist's work that brought international scorn in 2018. He Jiankui used CRISPR to edit embryos at the time of conception to try to make them resistant to infection with the AIDS virus. Changes to embryos' DNA can pass to future generations, unlike the work being done now in adults to treat diseases.

The Associated Press Health and Science Department receives support from the Howard Hughes Medical Institute’s Department of Science Education. The AP is solely responsible for all content.