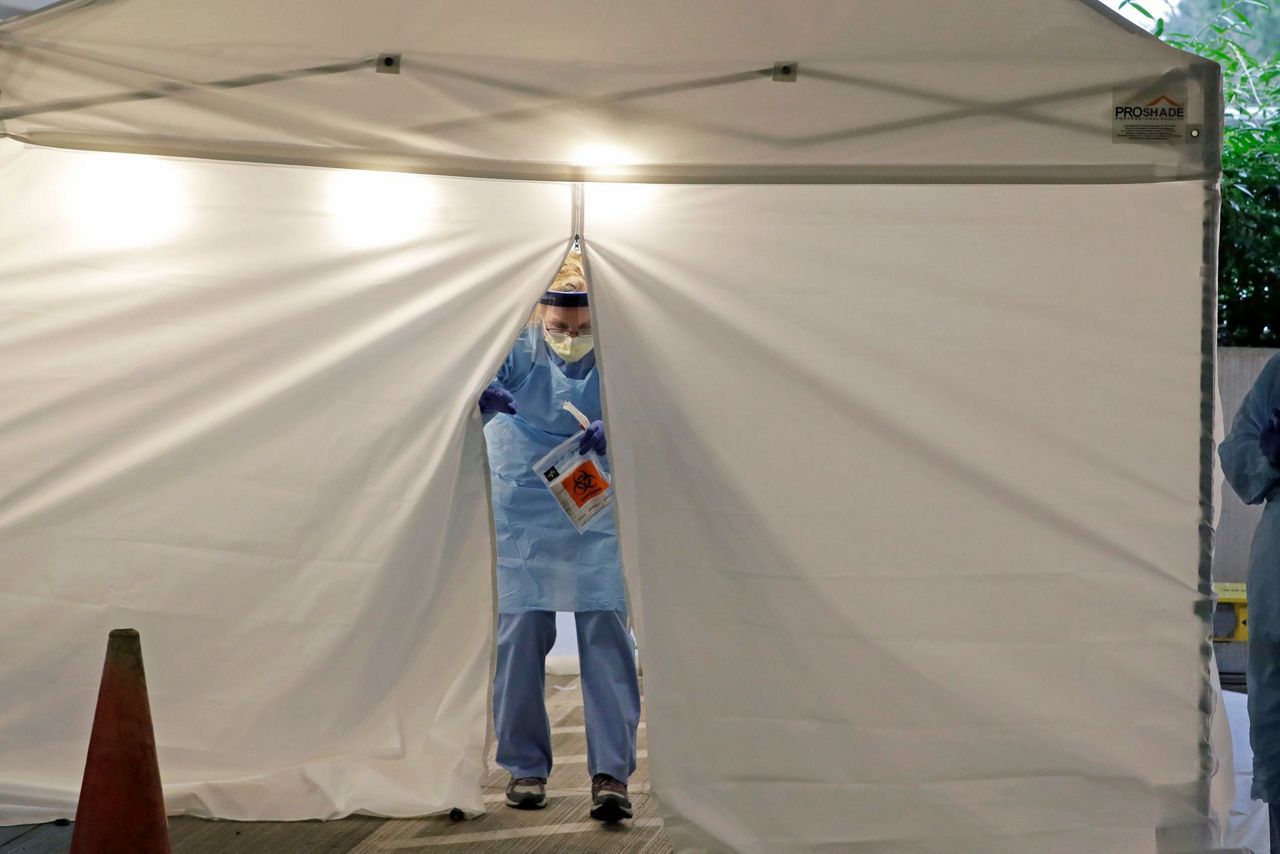 A nurse at a drive up COVID-19 coronavirus testing station set up by the University of Washington Medical Center exits a tent while holding a bag containing a swab used to take a sample from the nose of a person in their car, Friday, March 13, 2020, in Seattle. UW Medicine is conducting drive-thru testing in a hospital parking garage and has screened hundreds of staff members, faculty and trainees for the COVID-19 coronavirus. U.S. hospitals are setting up triage tents, calling doctors out of retirement, guarding their supplies of face masks and making plans to cancel elective surgery as they brace for an expected onslaught of coronavirus patients. (AP Photo/Ted S. Warren)

TOLEDO, Ohio (AP) — Government and hospital leaders are increasingly sounding the alarm about the health care system in the U.S. and its readiness to absorb waves of patients in the worst-case scenario involving the new coronavirus outbreak.

Among the biggest concerns is whether there will be enough beds, equipment and staff to handle several large outbreaks simultaneously in multiple cities.

Dr. Anthony Fauci, the National Institutes of Health's infectious diseases chief, said it's critical that steps be taken now to prevent the virus from spreading quickly.

“The job is to put a full-court press on not allowing the worst-case scenario to occur,” said Fauci, who appeared Sunday on several network news shows.

While he does not expect massive outbreaks in the U.S. like those in Italy, he said there is the possibility if it reaches that point that an overwhelming influx of patients could lead to a lack of supplies, including ventilators.

"And that's when you're going to have to make some very tough decisions," Fauci said.

In Washington state, which leads the nation in the number of positive COVID-19 cases with more than 600 illnesses and 40 deaths, the increase in people visiting clinics with respiratory symptoms is straining the state's supply of personal protective gear worn by health care workers.

The federal government has sent the state tens of thousands of respirators, gowns, gloves and other protective gear for health care providers. But those shipments aren't enough, said Clark Halvorson, Assistant Secretary of Health for Public Health Emergency Preparedness and Response.

The disease has infected over 162,000 people worldwide, and more than 6,000 people have died so far.

Most people who have tested positive for the virus experience only mild or moderate symptoms. Yet there's a greater danger and longer recovery period for older adults and people with existing health problems.

The nation's hospitals collectively have about a million beds, with 100,000 for critical care patients, but often those beds for the sickest patients are mostly filled, Scott Gottlieb, a former FDA commissioner, told CBS’ "Face the Nation."

"If we do have multiple epidemics in multiple large U.S. cities, the system will become overwhelmed," he said.

Officials in the Seattle area have been setting up temporary housing — and even bought a motel and leased another — to add space for patients who might be homeless or whose living conditions might not allow for self-isolation, such as students in college dorms. King County also is setting up modular housing and is using the arrivals hall at a county-owned airport as a shelter to reduce overcrowding — and meet social-distancing requirements — in existing homeless shelters.

Hospital executives say they're always planning for disasters and have been concentrating on coronavirus preparations for the past two months.

The system's network of clinics throughout Los Angeles and Southern California have additional capacity and doctor's are encouraging telemedicine, he said.

Dr. Peter Slavin, the president of Massachusetts General Hospital, said the next two weeks will be critical as the medical community expects a dramatic increase in the number of cases.

Ohio Gov. Mike DeWine recommended on Saturday that elective surgeries be postponed, including dental and veterinary procedures, so that health care workers won't be stretched thin and surgical masks can be saved for health care workers dealing with the virus.

ProMedica, which operates 13 hospitals in Ohio and Michigan, is ready to call in help from staffing agencies if needed and is looking at ways to provide child care for employees whose children are off school, said Deana Sievert, chief nursing . Doctors also have voluntarily canceled their vacations.

The community “can flatten off the curve of this,” by avoiding large events, staying at home, washing their hands and practicing social distancing to help U.S. hospitals avoid an onslaught of cases, said Dr. Penny Wheeler, CEO of Minneapolis-based Allina Health, which has 12 hospitals and more than 90 clinics in Minnesota and Wisconsin.

Allina also has been canceling conferences, meetings and anything else that does not directly impact patient care.

The Associated Press receives support for health and science coverage from the Howard Hughes Medical Institute’s Department of Science Education. The AP is solely responsible for all content.