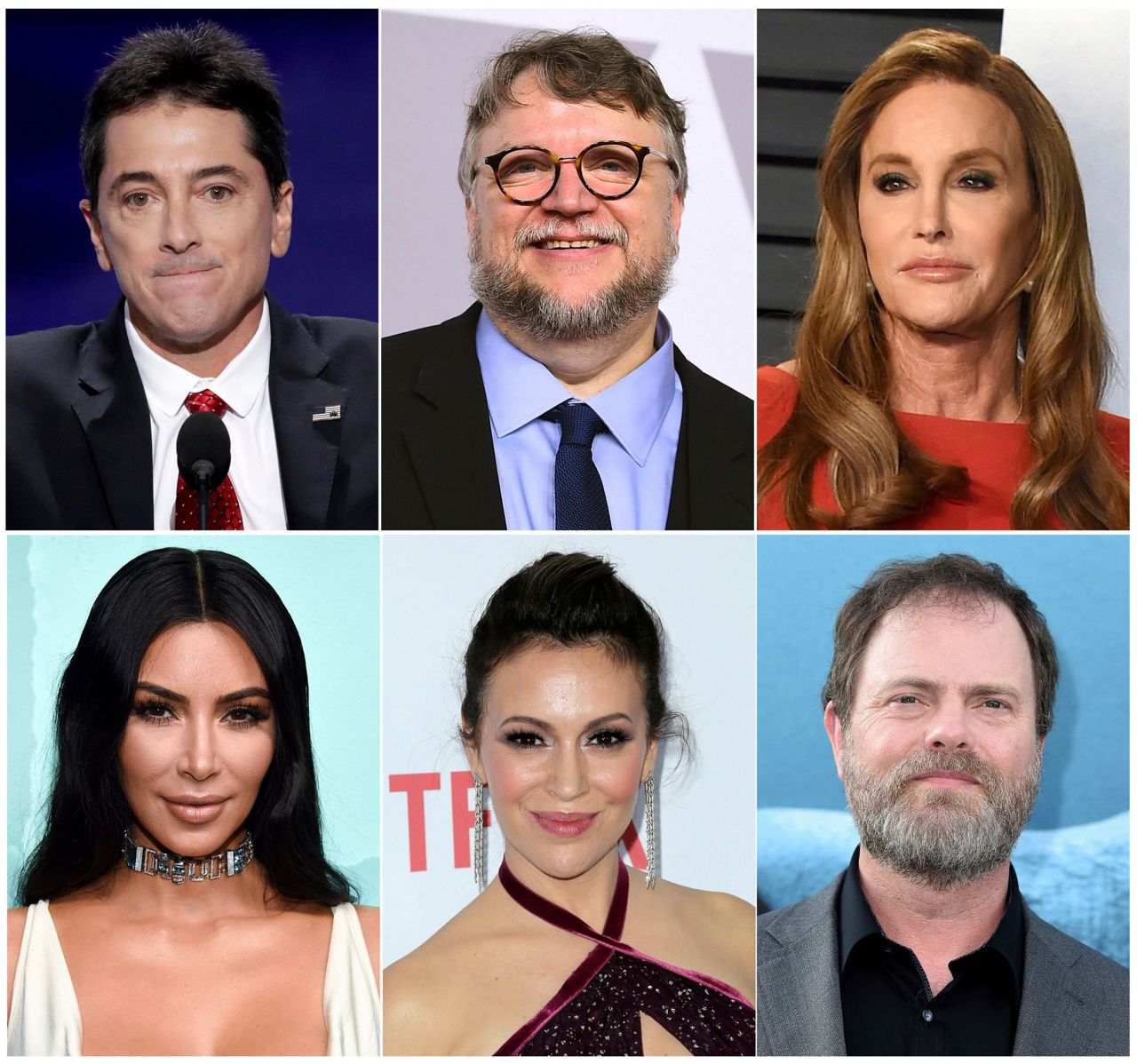 1 of 6
This combination photo shows celebrities, top row from left, Scott Baio, Guillermo del Toro, Caitlyn Jenner and bottom row from left, Kim Kardashian, Alyssa Milano and Rainn Wilson, who have been forced to evacuate their homes due to a fast-moving wildfire in Southern California. (AP Photo) 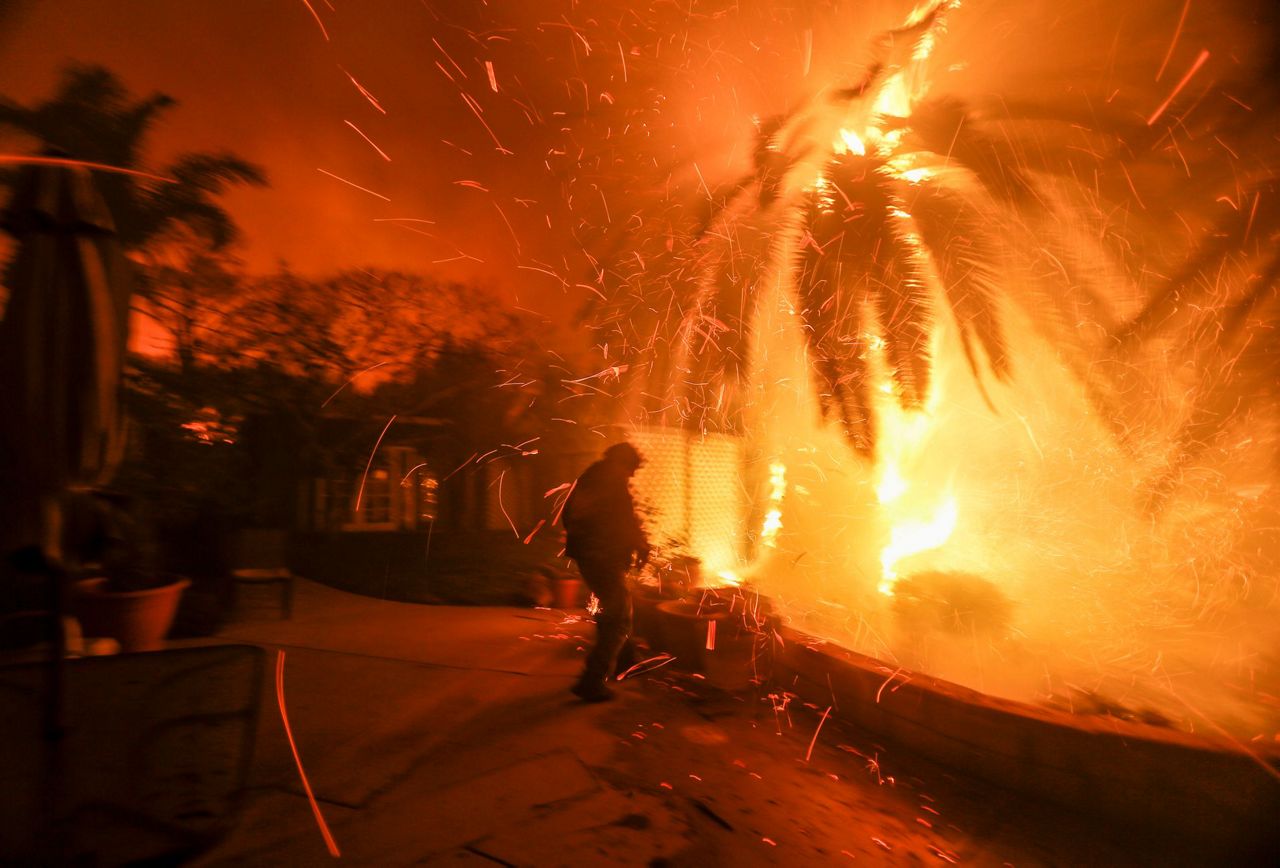 2 of 6
Tim Billow, 62, tries to save his plantings in his backyard as the Woolsey Fire burns in Malibu, Calif., Friday, Nov. 9, 2018. A Southern California wildfire continues to burn homes as it runs toward the sea. Winds are blamed for pushing the fire through scenic canyon communities and ridgetop homes. (AP Photo/Ringo H.W. Chiu) 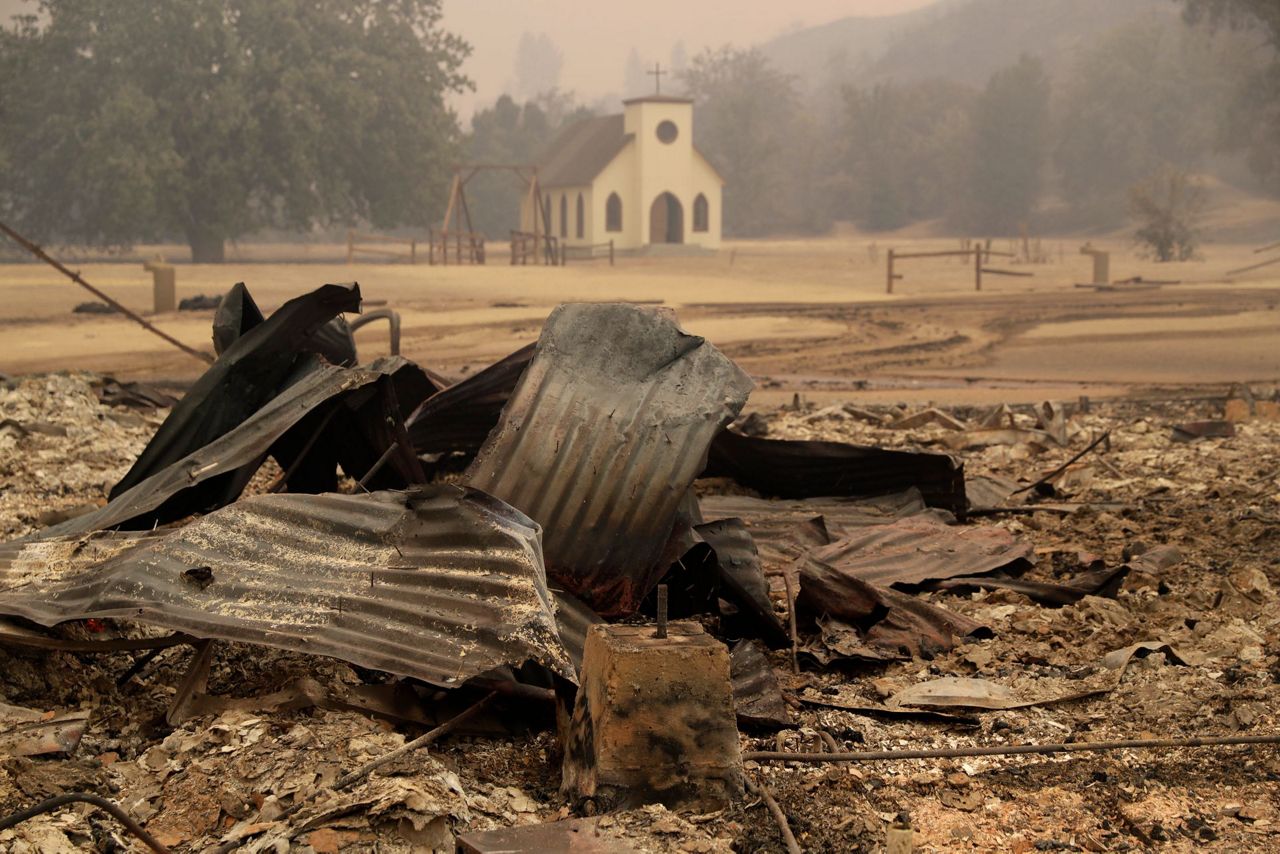 3 of 6
Paramount Ranch, where a number of Hollywood westerns have been filmed, is seen after it was decimated by a wildfire Friday, Nov. 9, 2018, in Augura Hills, Calif. (AP Photo/Marcio Jose Sanchez) 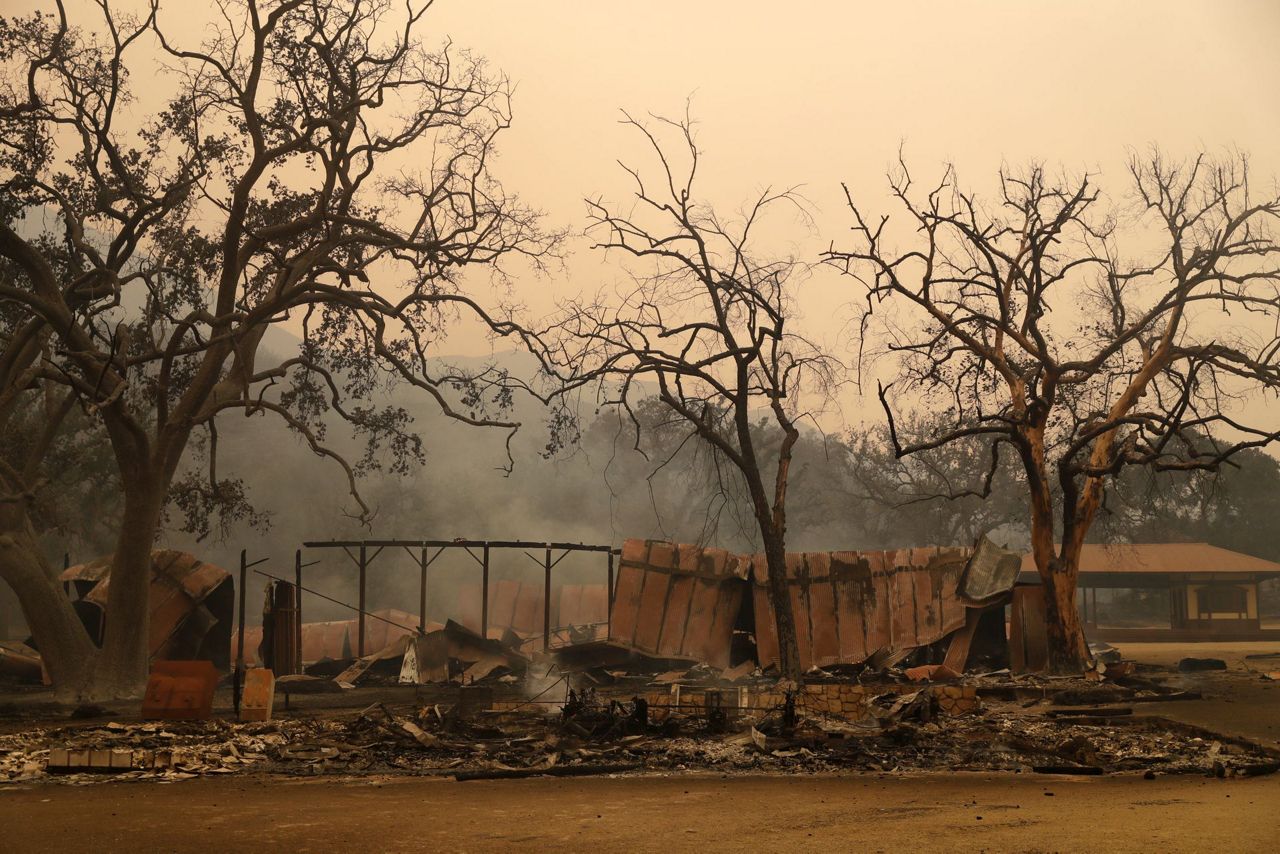 4 of 6
Paramount Ranch, where a number of Hollywood westerns have been filmed, is seen after it was decimated by a wildfire Friday, Nov. 9, 2018, in Agoura Hills, Calif. (AP Photo/Marcio Jose Sanchez) 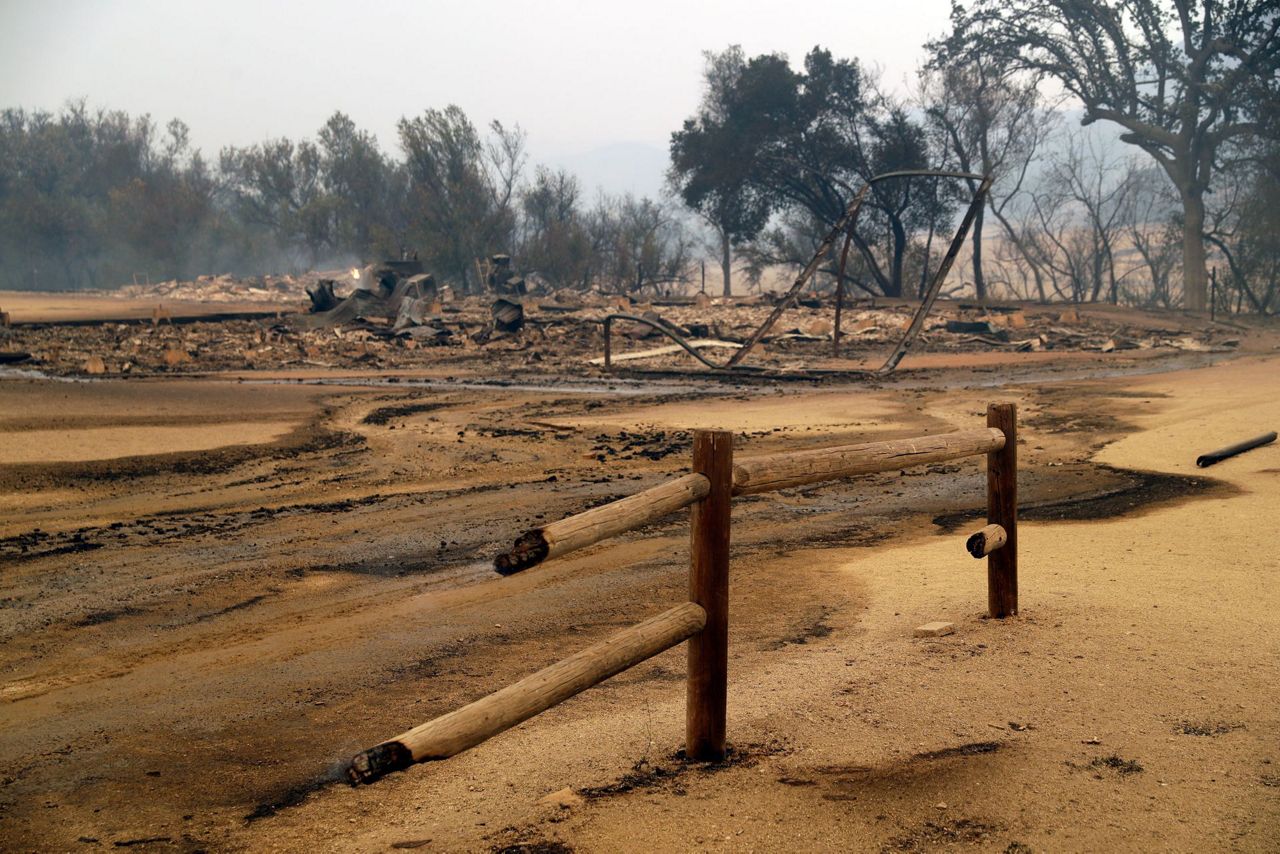 5 of 6
Paramount Ranch, where a number of Hollywood westerns have been filmed, is seen after it was decimated by a wildfire Friday, Nov. 9, 2018, in Agoura Hills, Calif. (AP Photo/Marcio Jose Sanchez) 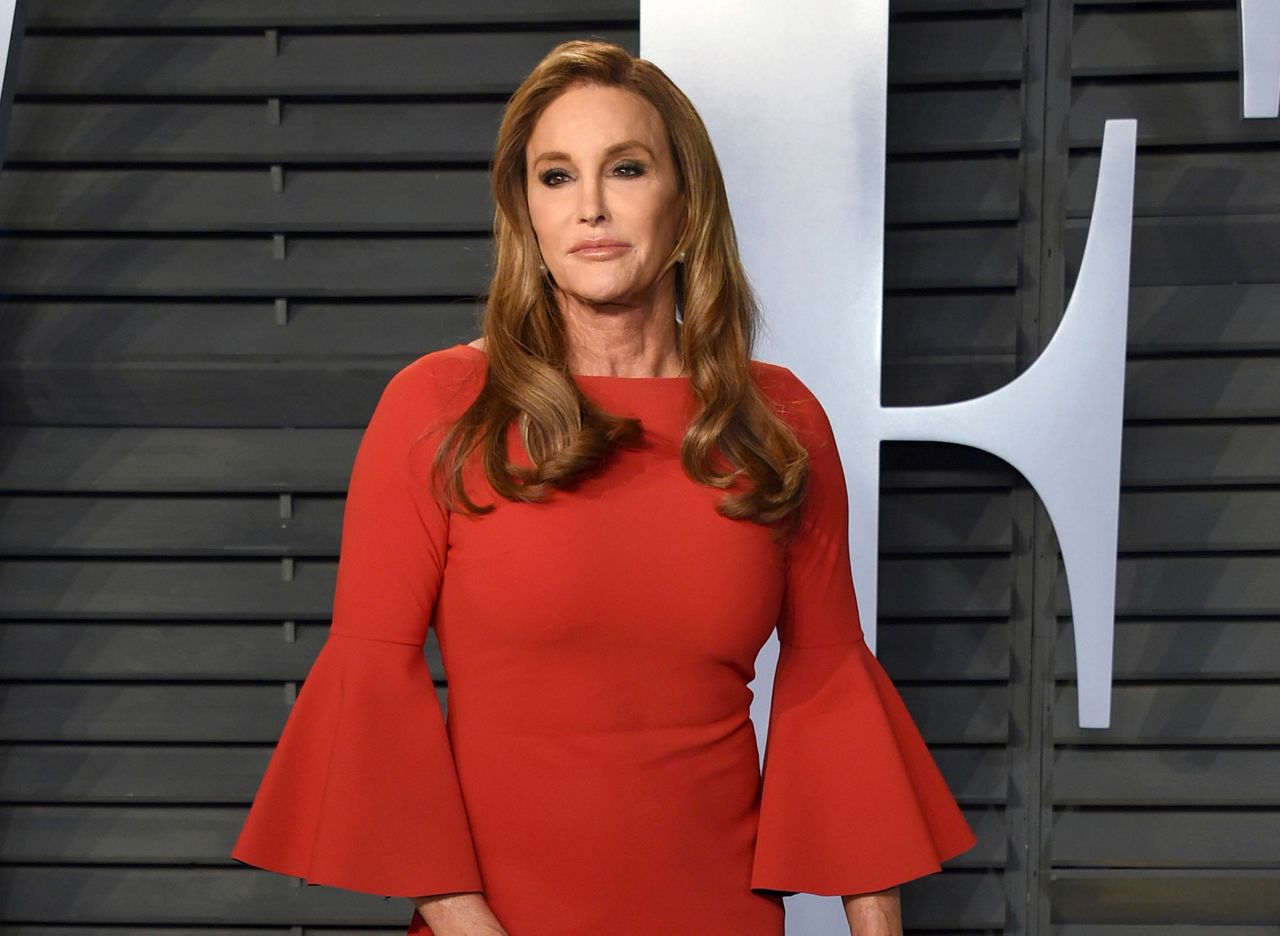 6 of 6
FILE - In this March 4, 2018 file photo, Caitlyn Jenner arrives at the Vanity Fair Oscar Party in Beverly Hills, Calif. A fast-moving wildfire in Southern California has scorched a historic movie site recently used by the HBO series "Westworld" and forced numerous celebrities to join the thousands fleeing flames that have claimed homes and prompted the total evacuation of the celebrity enclave Malibu. Kim Kardashian West, Scott Baio, Rainn Wilson and Guillermo del Toro are among numerous celebrities forced to evacuate their homes, in some cases hurriedly trying to arrange transport for their horses. Some, like del Toro and Caitlyn Jenner, did not know the fate of their homes. (Photo by Evan Agostini/Invision/AP, File)

LOS ANGELES (AP) — Rich or not, famous or not, there was little reprieve Saturday from the California wildfires sweeping through towns as different as the star-filled oceanside enclave of Malibu and the modest communities nearby and in the state's north.

Lady Gaga, Martin Sheen and Kim Kardashian West were among the celebrities who joined thousands of others in evacuating from the affluent coastal city that is as well-known as its residents. Stars went online to share their worries, with some able to follow up with good news Saturday.

Alyssa Milano, who on Friday tweeted that her house was "in jeopardy" but she had gotten needed help to evacuate her horses and that her children were safe, was among the lucky ones.

"My house is still standing. I'm on my way to bring firefighters water and food," she tweeted. She previously said her heart was with others facing "this awful disaster."

Others were left to wait.

"I am thinking so deeply for everyone who is suffering today from these abominable fires & grieving the loss of their homes or loved ones," Lady Gaga tweeted. "I'm sitting here with many of you wondering if my home will burst into flames. All we can do is pray together & for each other. God Bless You."

There were shout-outs as well to the firefighters struggling to contain the fires in what were described as especially difficult conditions.

"These guys are heroes," filmmaker Guillermo del Toro posted on Twitter. His so-called "Bleak House," which contains his collection of items too scary to be kept in the family home, was endangered.

Shannen Doherty, who'd been out of town when the fire broke out, said online that friends staying at her Malibu house evacuated safely with her dogs. She expressed gratitude to firefighters "putting their lives on the line for all of us" and sympathy for others affected by the fire.

Sheen ("The West Wing," ''Apocalypse Now"), interviewed by a TV station on the beach Friday night after fleeing his home, said the fire was the worst he has ever seen. He said he expects his house was destroyed.

The interview occurred after his son, actor Charlie Sheen, tweeted that he'd been unable to contact his father, and the Los Angeles Fox affiliate KTTV tracked him down. Martin Sheen gave a shoutout to his family to let them know he and his wife, Janet, were safe and planned to sleep in their car by the beach.

The status of Martin Sheen's home was unknown Saturday.

"Beverly Hills, 90210" star Doherty said her "heart is ripped apart" by the loss of a Malibu home where she and husband Kurt Iswarienko were married in 2011, posting on Instagram a wedding-day photo of the smiling couple on a tree-lined path at the property apparently owned by a friend.

She had previously found refuge in the house when her father died in 2010, Doherty wrote.

"It's the place I felt my dad with me. It's gone. Fire has taken it away. I'm devastated by all that's happening," she said.

The blaze started Thursday night and by Friday had pushed toward Malibu and the Pacific Ocean, prompting evacuations in Malibu, Calabasas, Agoura Hills and other nearby areas. Authorities said Saturday that two people were found dead in the fire zone and at least 150 homes burned .

Officials stressed late Saturday that high winds are expected to resume on Sunday and mandatory evacuations must remain in place.

In Northern California, the small inland town of Paradise was virtually wiped out by a fast-moving blaze that destroyed more than 6,700 buildings and claimed nine lives as of Saturday.

Rainn Wilson, who played Dwight on "The Office," indicated online that he and his family were away when flames "roared down the creek bed behind our house and missed it by a dozen yards!"

"Thousands of others have lost homes and pets and precious belongings. Especially the residents of Paradise who have lost lives," he tweeted.

Although the fatalities overshadowed any loss of property, Malibu's fame inevitably called attention to the state of its multimillion-dollar homes, including one made famous in ABC's reality dating series "The Bachelor."

The show's producers said in a statement Saturday that, with the area closed to traffic, they didn't know the condition of what is primarily a private residence. They said their main concern "is with the family who has been displaced, their neighbors, and all the communities impacted by this tragic fire."

Also left waiting was Caitlyn Jenner, whose hilltop home appeared intact when it was shot by a photographer for The Associated Press on Saturday morning. Jenner's representative noted that the Olympic gold medalist wouldn't know the extent of any damage to the home until she was allowed to return to it.

Even outside the evacuation zone, the impact of the fire was being felt by others in the entertainment industry.

"The world is literally on fire right now. And unfortunately it's becoming more and more common here in California," actress Natalie Portman said Friday night in Hollywood at an American Film Institute Fest premiere of her film "Vox Lux."

She said she was hoping for the best for friends and everyone else affected by the blaze. She said she'd spoken to her own two children about the fires because "they need to feel safe" and also understand that there are broad regional effects, like poor air quality.

Paramount Pictures canceled Sunday's premiere of the film "Instant Family" in Los Angeles due the wildfire. The studio said it would donate food ordered for the after party to the American Red Cross, and would screen the film at an evacuation center.

Kardashian West posted video on Instagram of an area on fire with a message "Pray for Calabasas." She said she landed back home, spent one hour packing and evacuated shortly afterward.

In addition to homes destroyed, Paramount Ranch's "Western Town," a landmark film location dating back to 1927 that included a jail, hotel and saloon, burned to the ground. The TV series "Westworld" is among the many productions that have filmed at the ranch in the mountains west of Los Angeles.