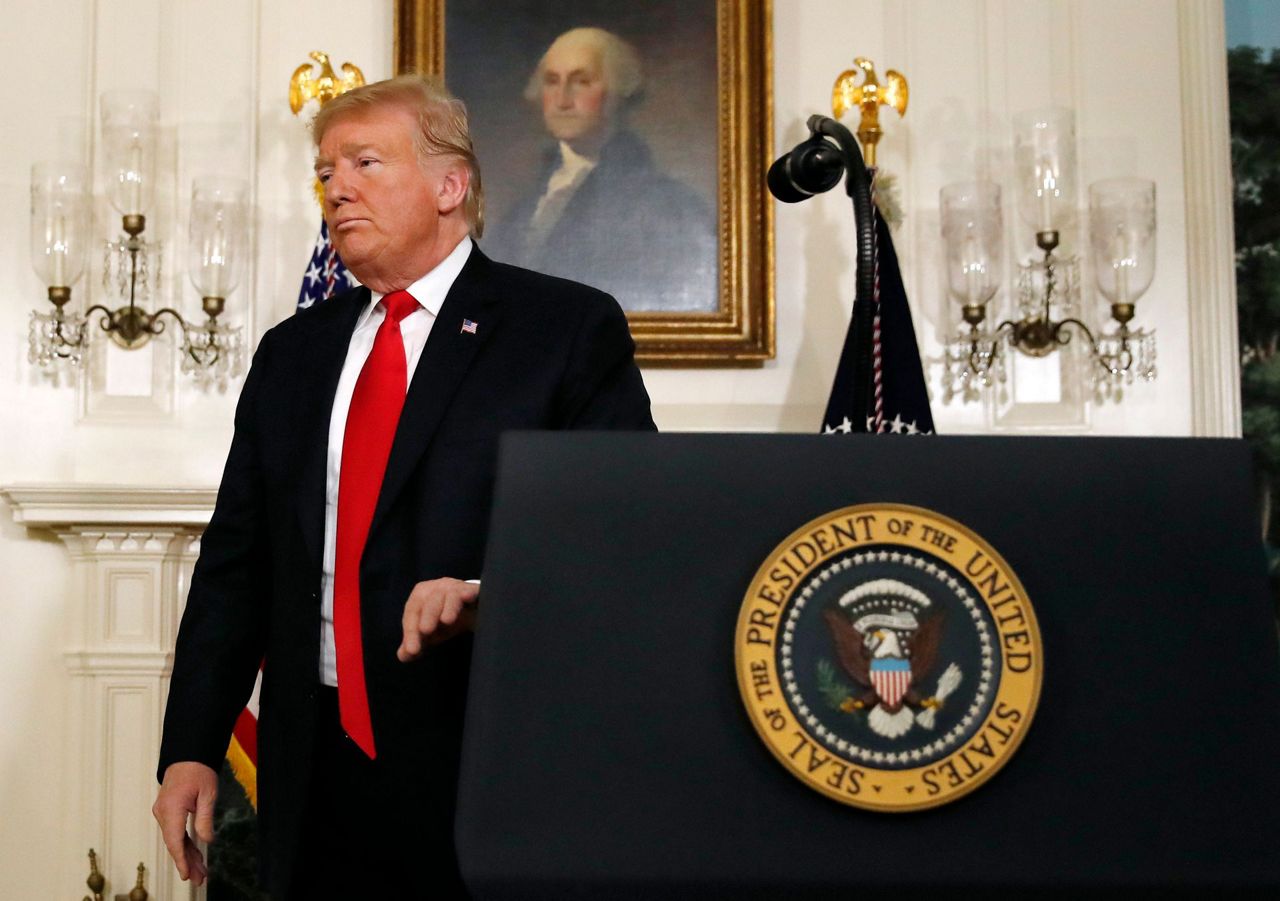 1 of 2
President Donald Trump leaves the podium after speaking about the partial government shutdown, immigration and border security in the Diplomatic Reception Room of the White House, in Washington, Saturday, Jan. 19, 2019. (AP Photo/Alex Brandon) 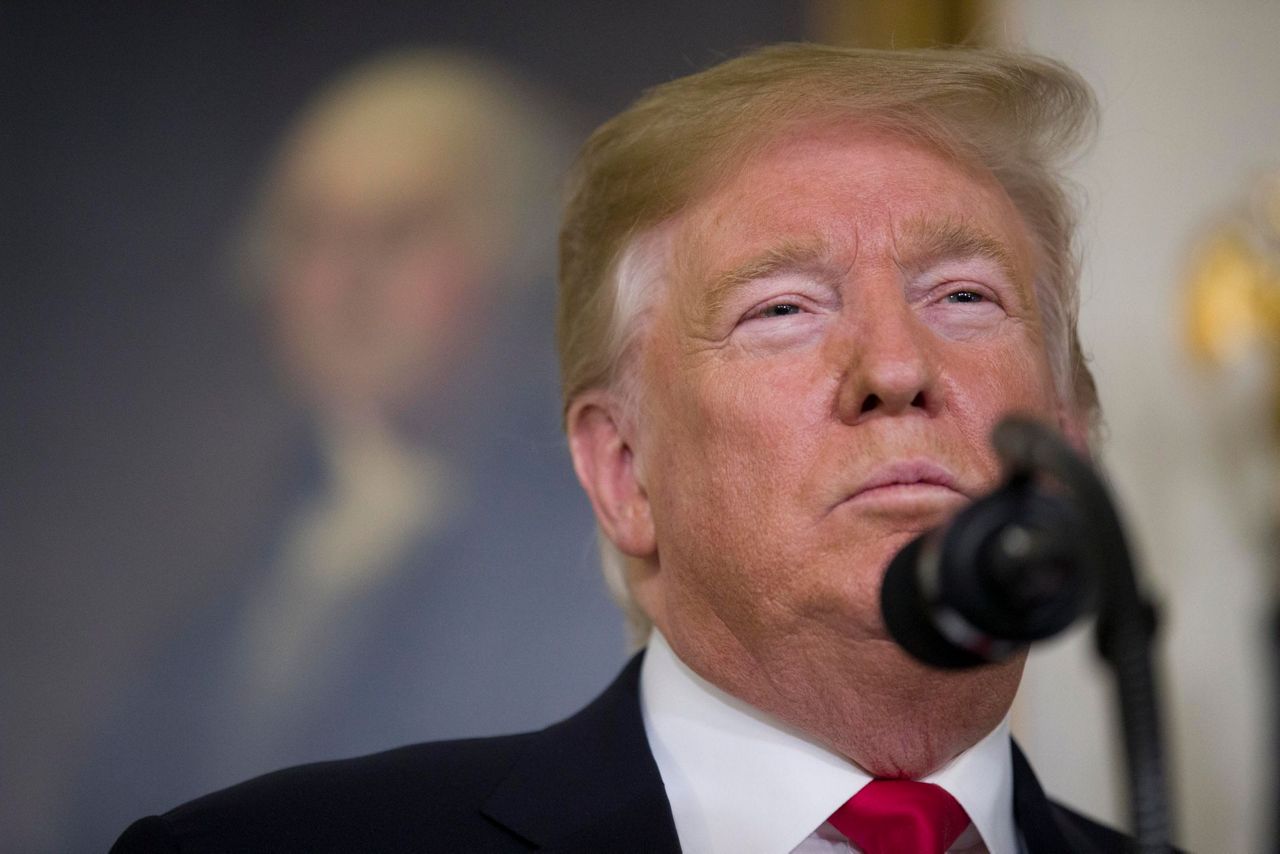 2 of 2
President Donald Trump pauses while speaking about the partial government shutdown, immigration and border security in the Diplomatic Reception Room of the White House, in Washington, Saturday, Jan. 19, 2019.(AP Photo/Alex Brandon)

WASHINGTON (AP) — President Donald Trump's proposal to reopen the government, with immigration provisions Democrats have denounced as inadequate, is headed for Senate action, its prospects uncertain.

Senate Majority Leader Mitch McConnell will try to muscle through the 1,300-page spending measure, which includes $5.7 billion to fund Trump's proposed wall along the U.S.-Mexico border, the sticking point in the standoff between Trump and Democrats that has led to a partial government shutdown now in its 32nd day.

Meanwhile, another missed paycheck looms for hundreds of thousands of federal workers and Democrats say they won't negotiate border funding while the shutdown continues.

Senate Republicans late Monday unveiled the legislation, dubbed the "End The Shutdown And Secure The Border Act," but its passage this week is by no means certain.

Republicans hold a 53-47 majority in the chamber but need Democrats to reach the usual 60-vote threshold for bills to advance. No Democrat has publicly expressed support for the proposal Trump announced over the weekend.

"Nothing has changed with the latest Republican offer," Schumer spokesman Justin Goodman said. "President Trump and Senate Republicans are still saying: 'Support my plan or the government stays shut.' That isn't a compromise or a negotiation — it's simply more hostage taking."

The Republican plan is a trade-off: Trump's border wall funding in exchange for temporary protection from deportation for some immigrants. To try to draw more bipartisan support, it adds $12.7 billion in supplemental funding for regions hit by hurricanes, wildfires and other natural disasters. All told, it would provide about $350 billion for nine Cabinet departments whose budgets are stalled. Other than the wall and immigration-related provisions, the core measure hews closely to a package of spending bills unveiled by House Democrats last week.

In exchange for $5.7 billion for Trump's wall, the legislation would extend temporary protections against deportation to around 700,000 immigrants covered by the Deferred Action for Childhood Arrivals program, or DACA. Trump has tried dismantling the Obama-era program, which covers people who arrived in the U.S. illegally as children, but has been blocked by federal lawsuits.

That figure is substantially lower than the 1.8 million people Trump proposed protecting a year ago in a plan that also included other immigration changes and $25 billion to pay the full costs of building his wall. Trump's proposal was among several the Senate rejected last February.

The new Senate bill would also provide three more years of temporary protections against deportation to around 325,000 immigrants in the U.S. who have fled countries racked by natural disasters or violent conflicts. Trump has ended that program, called Temporary Protected Status, for El Salvador, which has the most holders of the protected status, as well as for Honduras, Nicaragua and several other countries.

Democrats said that Trump's proposal for a three-year DACA extension didn't go far enough and that he was simply offering to restore elements of immigration provisions he'd taken away. And immigration advocates protested a Trump-backed plan to require children from El Salvador, Honduras and Guatemala who are seeking asylum in the U.S. to apply at processing centers to be set up in Central America.

Some on the right, including conservative commentator Ann Coulter, accused Trump of offering "amnesty."

"No, Amnesty is not a part of my offer," Trump tweeted Sunday, in response. He added: "Amnesty will be used only on a much bigger deal, whether on immigration or something else."

While the House and the Senate are scheduled to be back in session Tuesday, no votes have been scheduled on Trump's plan. McConnell spokesman David Popp said the GOP leader "will move" to vote on consideration of the president's proposal this week. The bill includes funding for most domestic agencies.

House Democrats, meanwhile, are pushing ahead this week with their legislation to reopen the government and add $1 billion for border security — including 75 more immigration judges and infrastructure improvements — but no funding for the wall.

On Tuesday, Trump tweeted that Democrats are playing "political games" and repeated his claims that the wall is a solution to drugs and crime — although the Drug Enforcement Administration says only a small percentage of drugs comes into the country between ports of entry.

"Without a Wall our Country can never have Border or National Security," Trump tweeted. "With a powerful Wall or Steel Barrier, Crime Rates (and Drugs) will go substantially down all over the U.S. The Dems know this but want to play political games. Must finally be done correctly. No Cave!"

The impact of the government's longest-ever shutdown continues to ripple across the nation. The longest previous shutdown was 21 days in 1995-96, when Bill Clinton was president.

The Transportation Security Administration said the percentage of its airport screeners missing work hit 10 percent on Sunday, up from 3.1 percent on the comparable Sunday a year ago.

The screeners, who have been working without pay, have been citing financial hardship as the reason they can't report to work. Even so, the agency said it screened 1.78 million passengers Sunday with only 6.9 percent having to wait 15 minutes or longer to get through security.

"Well, of course," Pence said. "The legislative process is a negotiation."