VOTE IN OUR POLLWhich of our 2019 Everyday Heroes will get the Viewers' Choice award? You decide
ATTRACTIONS INSIDEREverything you need to know about Florida's theme parks — and sign up to get news delivered to your inbox
GASPARILLAAvast Ye! It's almost Gasparilla time - 5 things to know 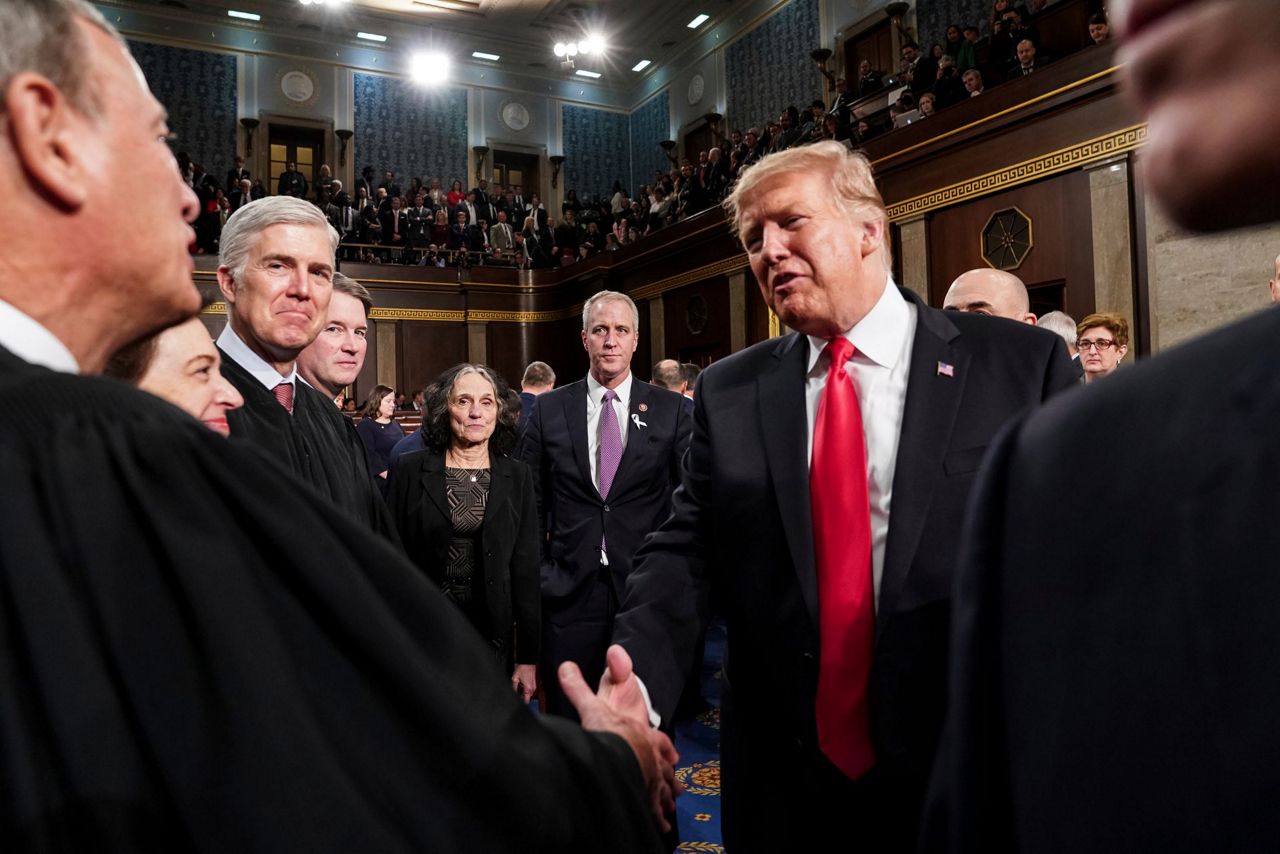 1 of 2
President Donald Trump talks to Supreme Court Chief Justice John Roberts while leaving the House chamber after giving his State of the Union address to a joint session of Congress, Tuesday, Feb. 5, 2019 at the Capitol in Washington. (Doug Mills/The New York Times via AP, Pool) 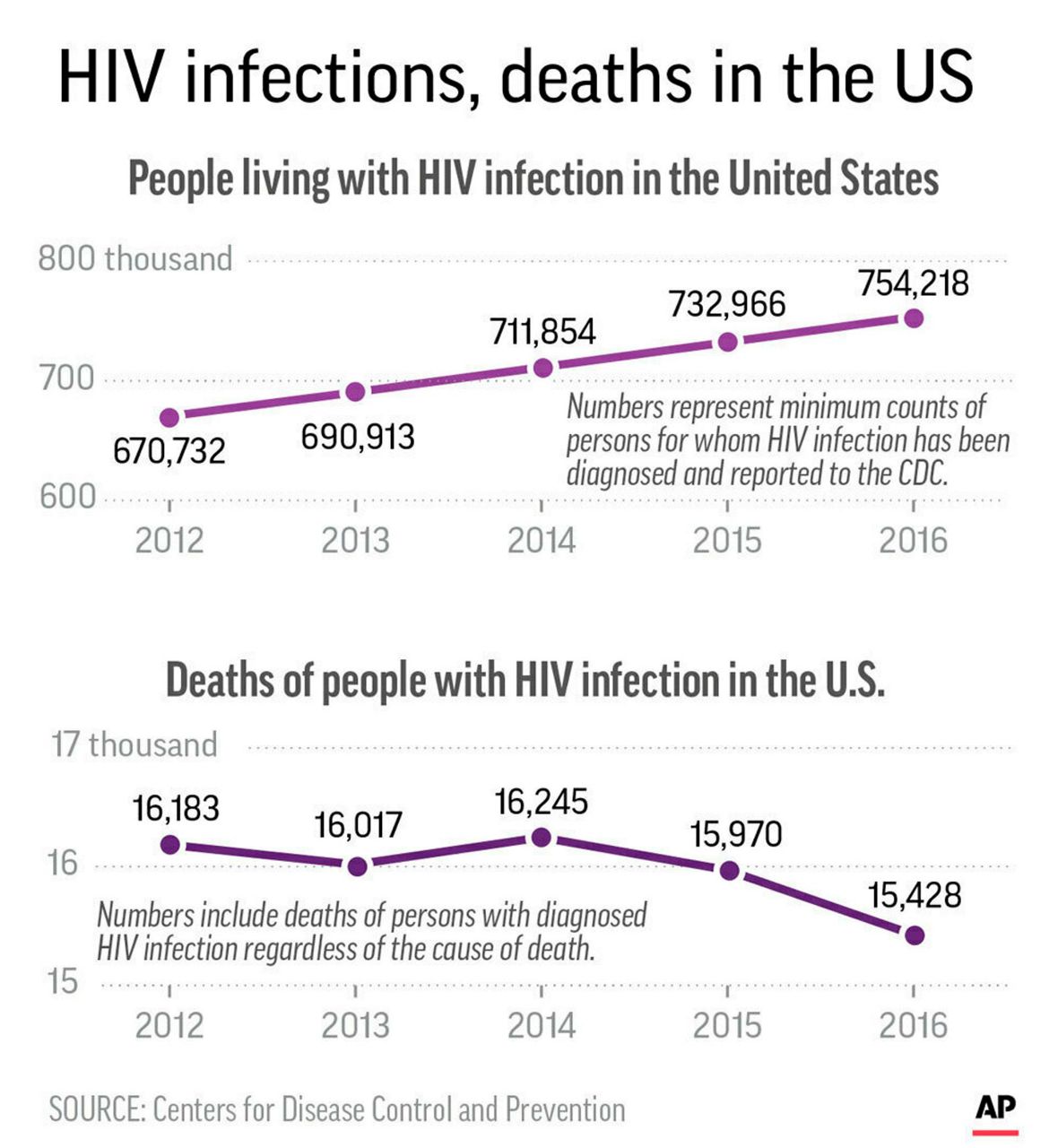 2 of 2
Graphic shows statistics of people in the U.S. living with HIV and deaths of people with HIV/AIDS.;

Trump launching campaign to end HIV epidemic in US by 2030

WASHINGTON (AP) — President Donald Trump is launching a campaign to end the HIV epidemic in the United States by 2030, targeting areas where new infections happen and getting highly effective drugs to people at risk.

His move is being greeted with a mix of skepticism and cautious optimism by anti-AIDS activists. State and local health officials are warning the administration not to take money from other programs to finance the initiative, whose budget has not been revealed.

Briefing reporters ahead of Trump's State of the Union speech , Health and Human Services Secretary Alex Azar and senior public health officials said the campaign relies on fresh insights into where about half of new HIV cases occur — 48 out of some 3,000 U.S. counties, and Washington, D.C., Puerto Rico and seven states with at-risk rural residents.

"We've never had that kind of 'This is the target,'" said Dr. Anthony Fauci, the government's pre-eminent AIDS warrior and head of the National Institute of Allergy and Infectious Diseases. The government has "been trying to address HIV, but never in such a focused way," he said.

HIV is the virus that causes AIDS.

"Together, we will defeat AIDS in America and beyond," Trump said in his speech. While he pledged funding in his upcoming budget, he did not say how much.

That raised a flag for state officials.

"This effort cannot move existing resources from one public health program and repurpose them to end HIV without serious consequences to our public health system," Michael Fraser, CEO of the Association of State and Territorial Health Officials, said in a statement.

Anti-AIDS activists said they're ready to work with the White House, but wary because of Trump's previous efforts to slash Medicaid health care for low-income people, and his administration's ongoing drive to roll back newly won acceptance for LGBTQ people.

"To date, this administration's actions speak louder than words and have moved us in the wrong direction," said AIDS United, which funds and advocates policies to combat AIDS.

The ONE Campaign, the global anti-poverty group co-founded by rock singer Bono, called Trump's pledge a "welcome sign," but pointed out that the administration has also proposed deep cuts in U.S. funding for efforts to battle HIV in Africa.

"While we might have policy differences with the president and his administration, this initiative, if properly implemented and resourced, can go down in history as one of the most significant achievements of his presidency," Michael Ruppal, executive director of the AIDS Institute, said in a statement.

While Azar said significant new funding would be included in the president's budget, he also emphasized that the campaign is about making more efficient use of existing programs like the Ryan White HIV/AIDS Program, which provides medical care and support services.

"The tools are there," Azar said. "This is about execution."

Today's HIV treatments work so well they not only can give people with the AIDS virus a near-normal life expectancy, they offer a double whammy — making those patients less likely to infect other people.

At the same time, a longtime HIV medication named Truvada can prevent infection if taken daily by healthy people who are at risk from their infected sexual partners, a strategy known as "pre-exposure prophylaxis" or PreP.

The people most at risk include men who have sex with men, minorities, particularly African-Americans, and American Indians/Alaska Natives. Azar said the administration's campaign would rely on public health workers to identify people at risk for HIV/AIDS, get them tested, and on medication.

The 48 counties HHS is focusing on are mainly metro areas. The states are Alabama, Arkansas, Kentucky, Mississippi, Missouri, Oklahoma and South Carolina.

"Trust is a crucial weapon in our fight to eradicate HIV and it's necessary to encourage people from marginalized groups to get tested," said Dr. Albert Wu, an HIV researcher at Johns Hopkins University.

The initial goal is to reduce new HIV infections by 75 percent in five years.

There are about 40,000 new cases of HIV infections a year in the U.S. That's a dramatic reduction from the crisis years of the AIDS epidemic, but progress has stalled. More than 1 million Americans live with the disease.

William McColl of AIDS United said the Trump administration's goal is "very doable," based on currently available technology and trends.

"I think the HIV community would work with the administration on this issue if they're serious, but it's also going to take real action, including possibly regulatory and legislative changes to achieve the goal," said McColl.

Azar said the idea for the new push came from within the ranks of HHS, building on progress made over the last 30 years under administrations of both parties.

"There was a recognition that we were facing a unique and historic moment where all the strands were coming together," said Azar. They took the idea to Trump, who "is personally invested in this," said Azar.

In recent years a number of health organizations, including the United Nations, have called for coordinated steps to end the HIV epidemic by 2030.