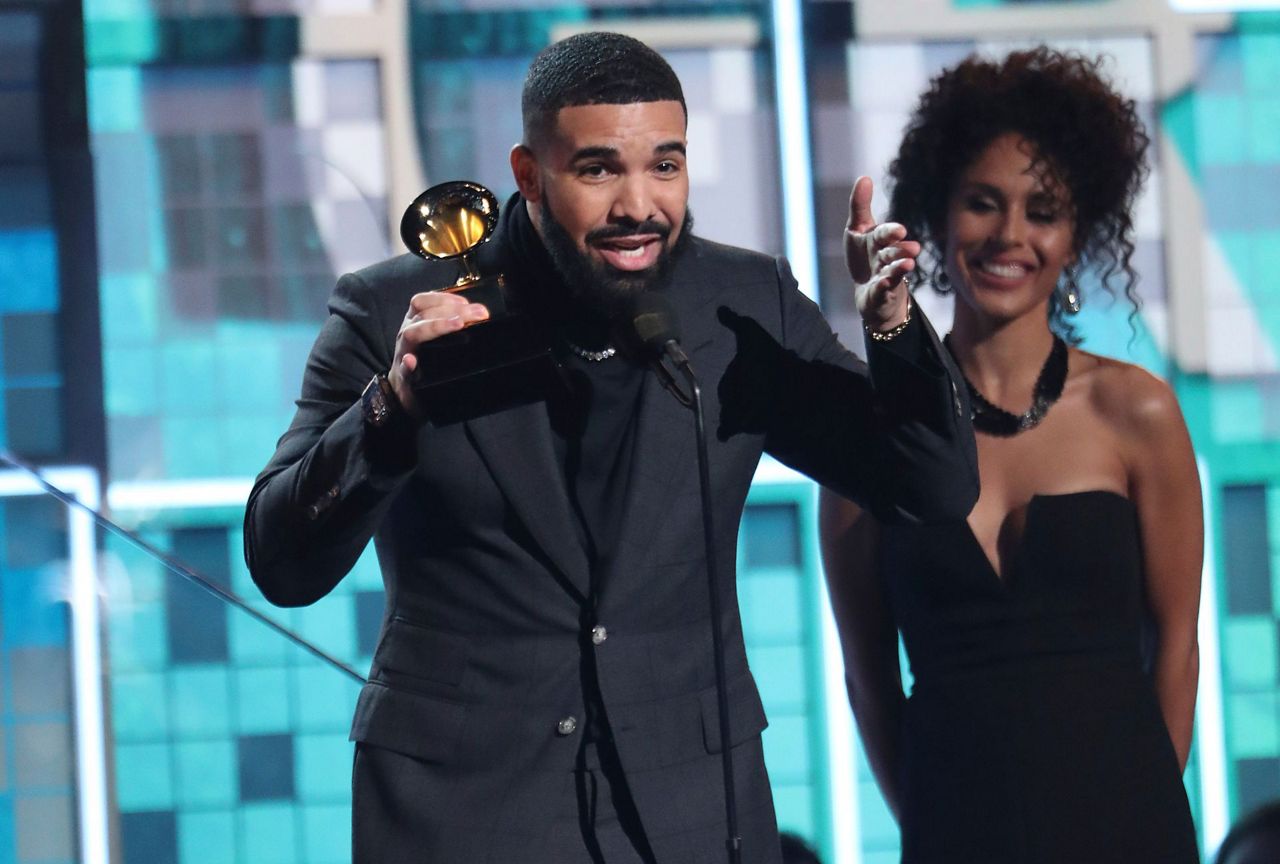 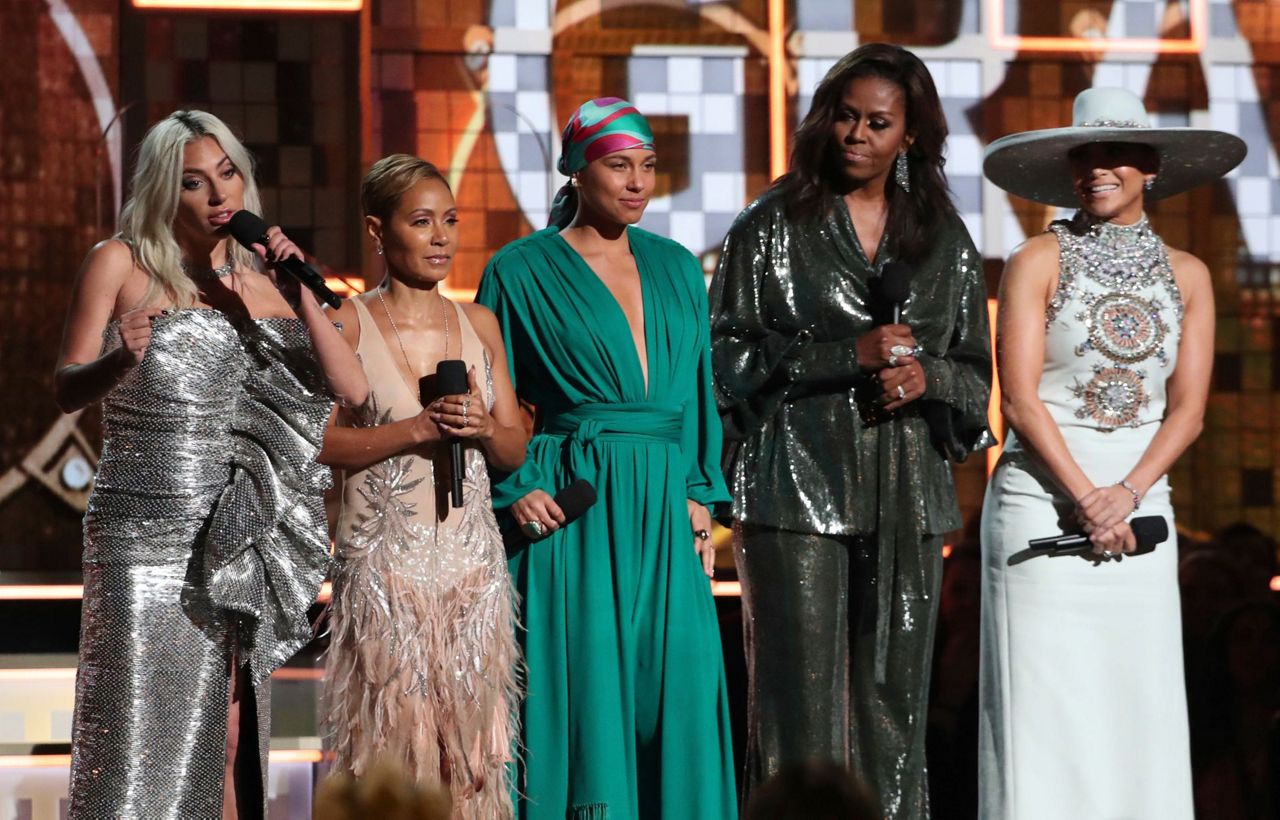 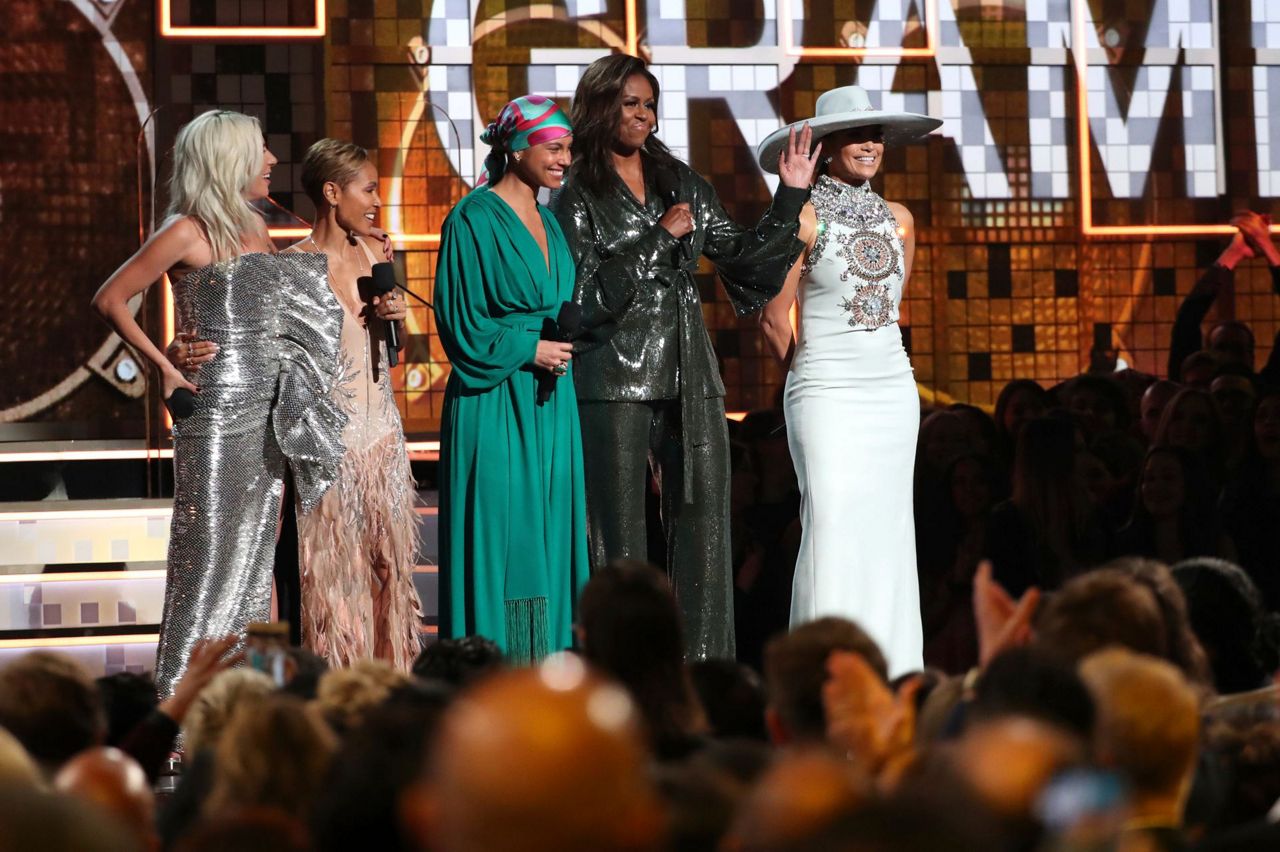 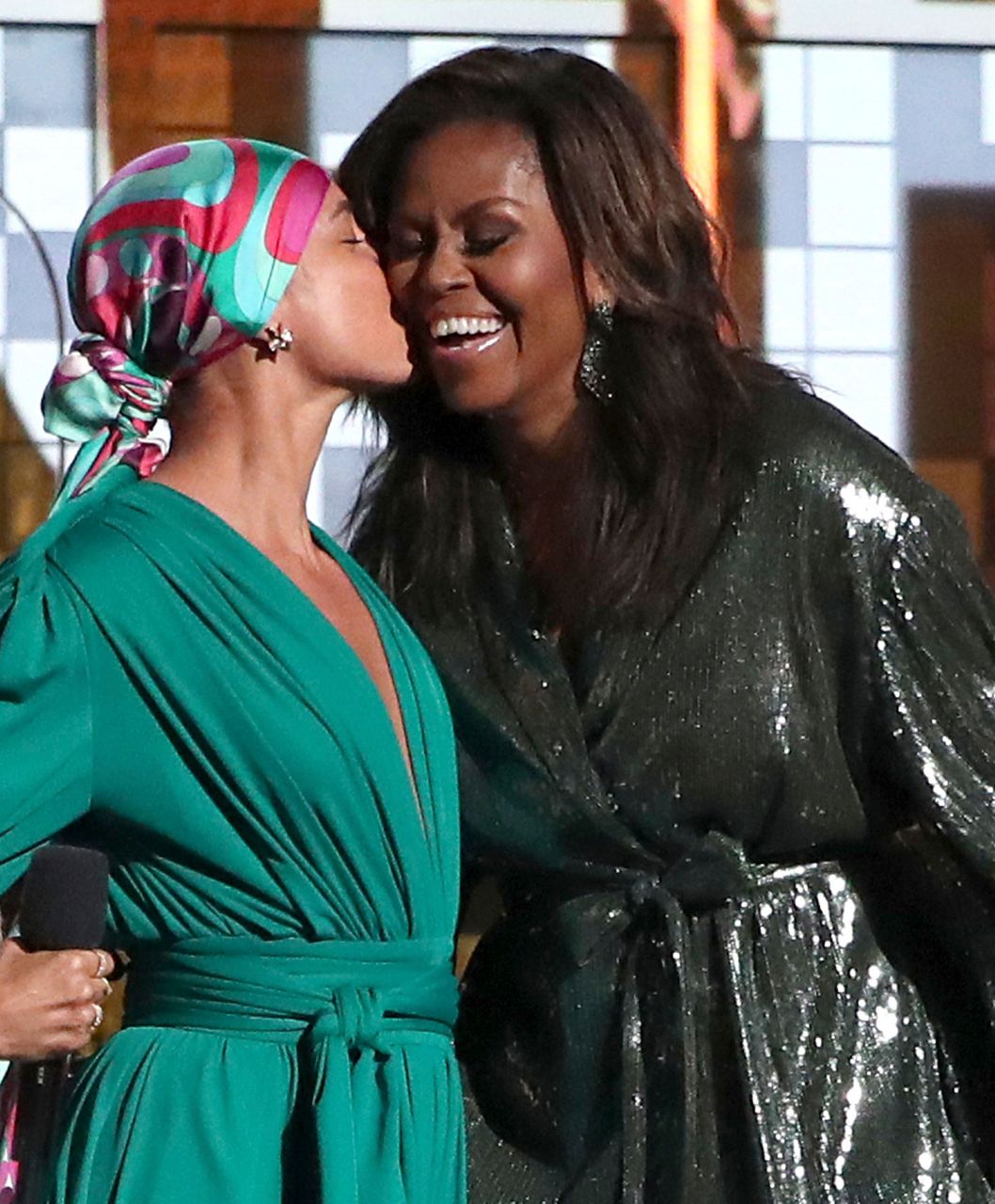 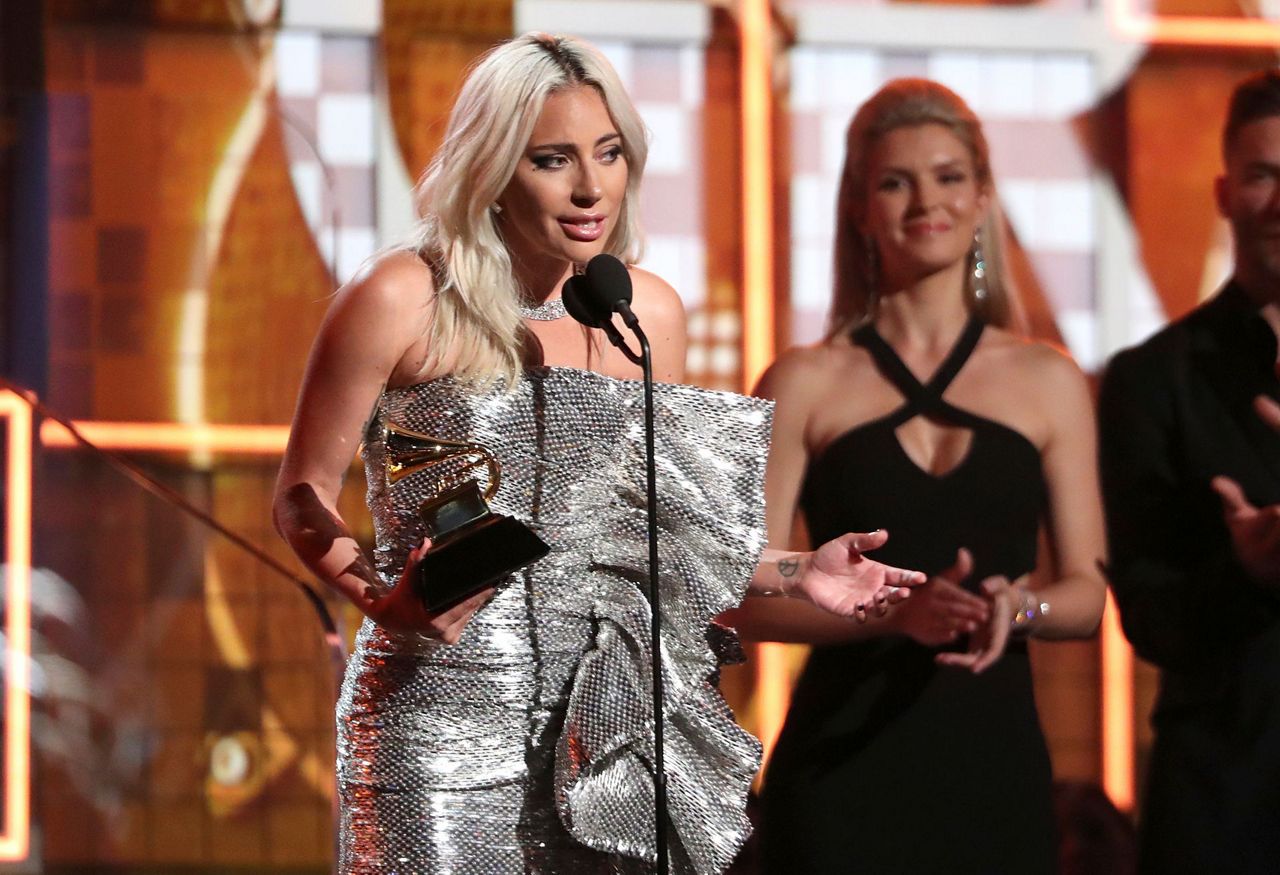 5 of 12
Lady Gaga accept the award for best pop duo or group performance for "Shallow" at the 61st annual Grammy Awards on Sunday, Feb. 10, 2019, in Los Angeles. (Photo by Matt Sayles/Invision/AP) 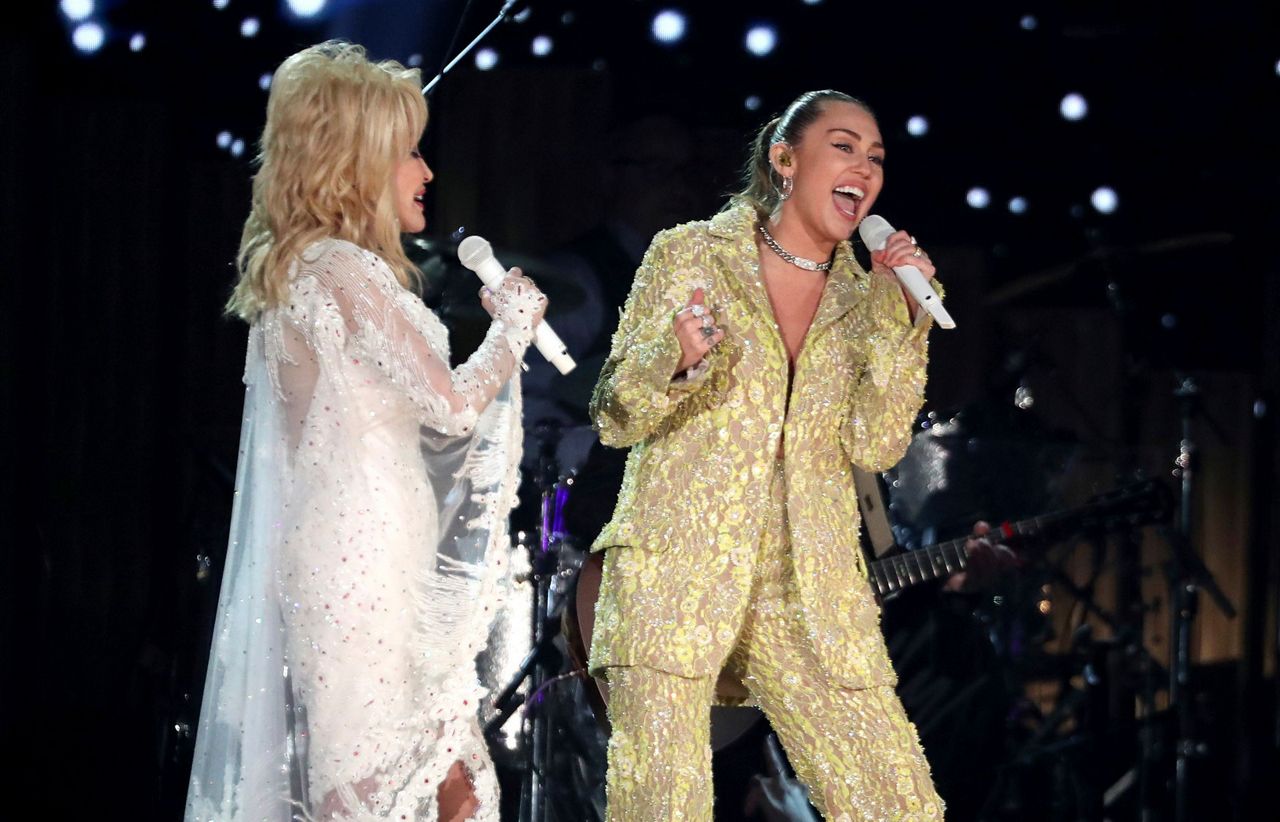 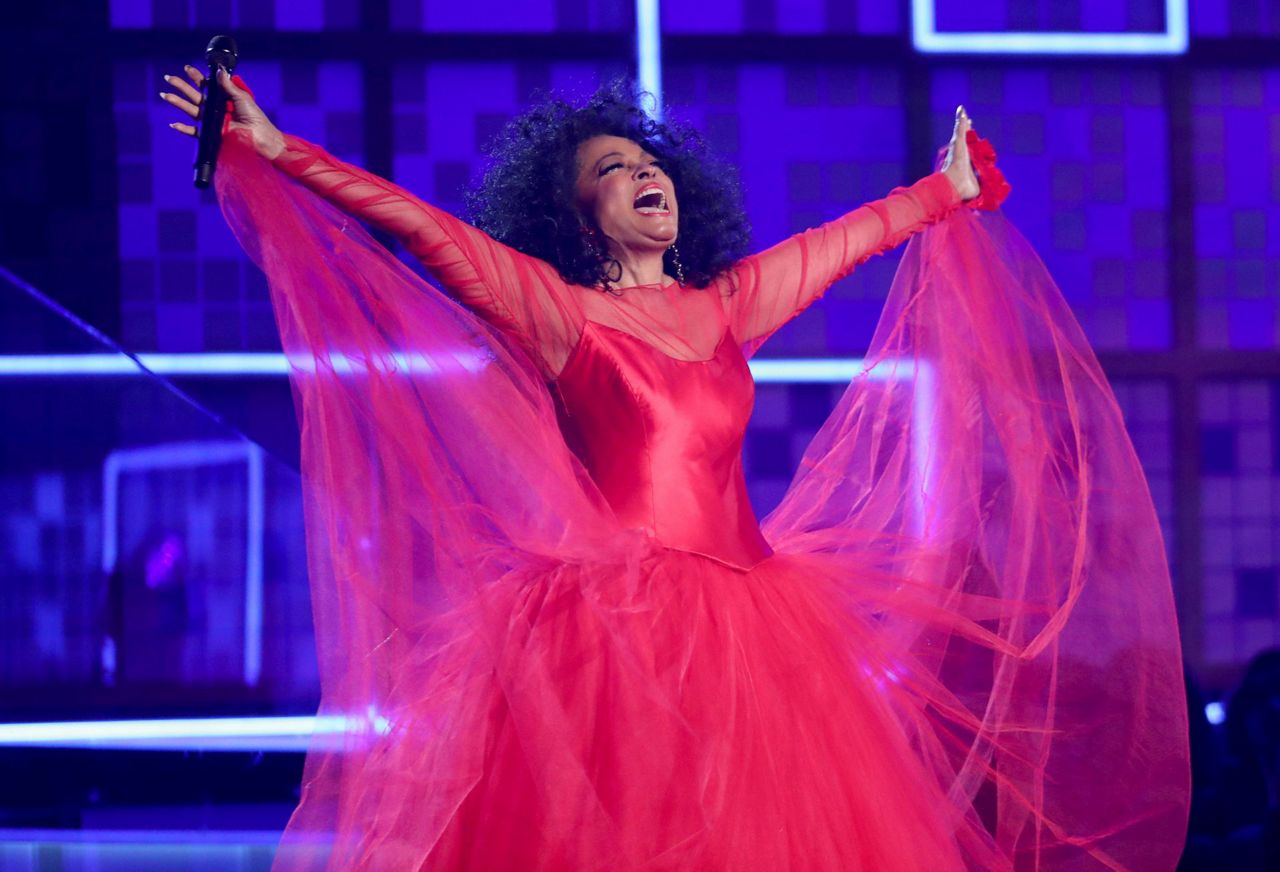 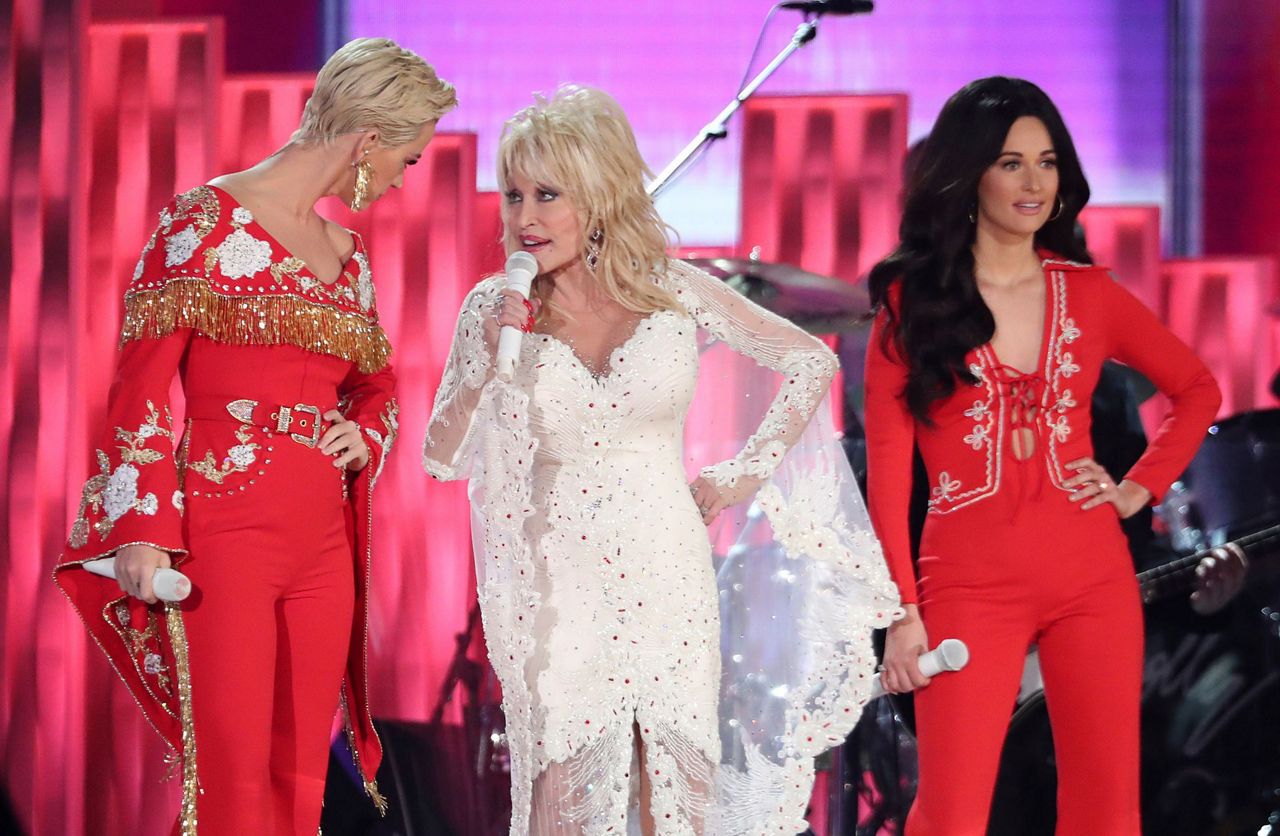 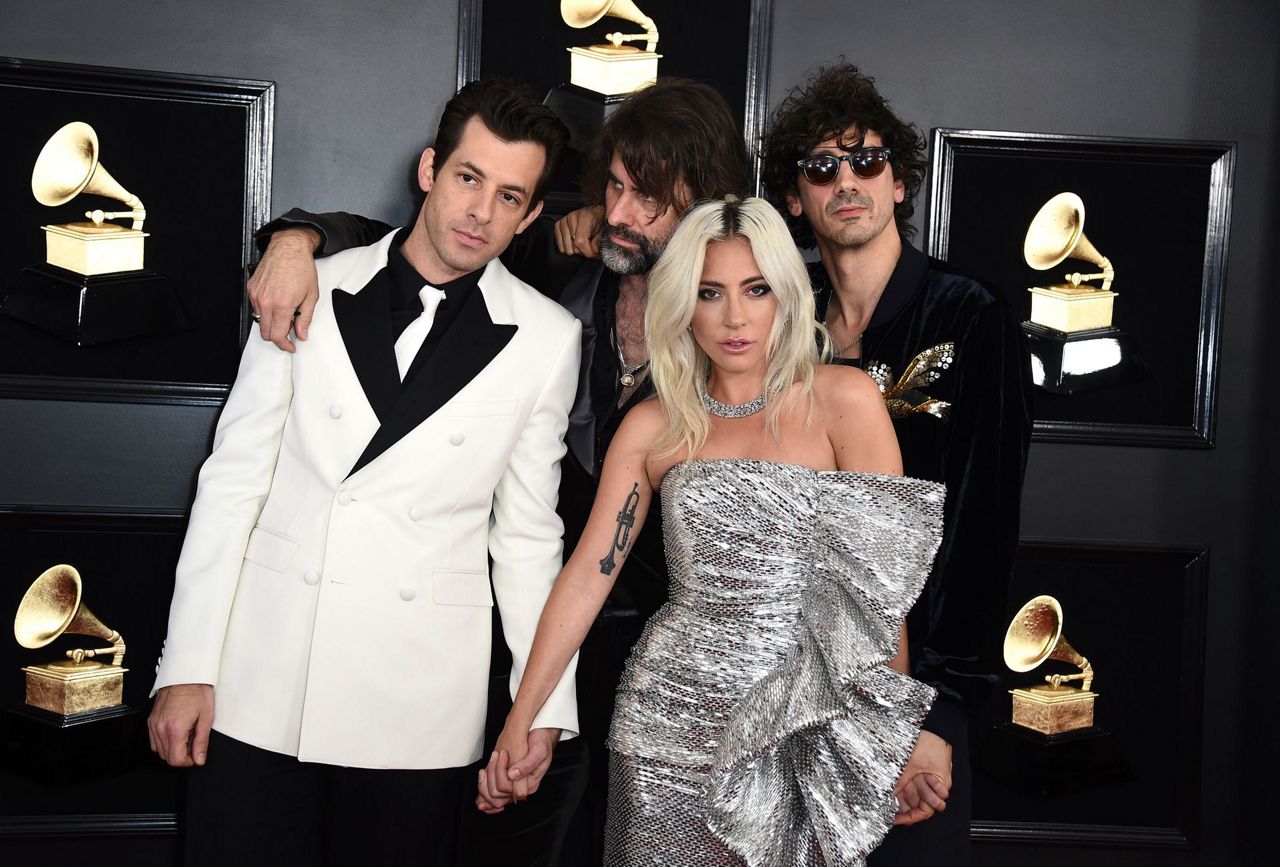 9 of 12
Mark Ronson, from left, Andrew Wyatt, Lady Gaga, and Anthony Rossomando arrive at the 61st annual Grammy Awards at the Staples Center on Sunday, Feb. 10, 2019, in Los Angeles. (Photo by Jordan Strauss/Invision/AP) 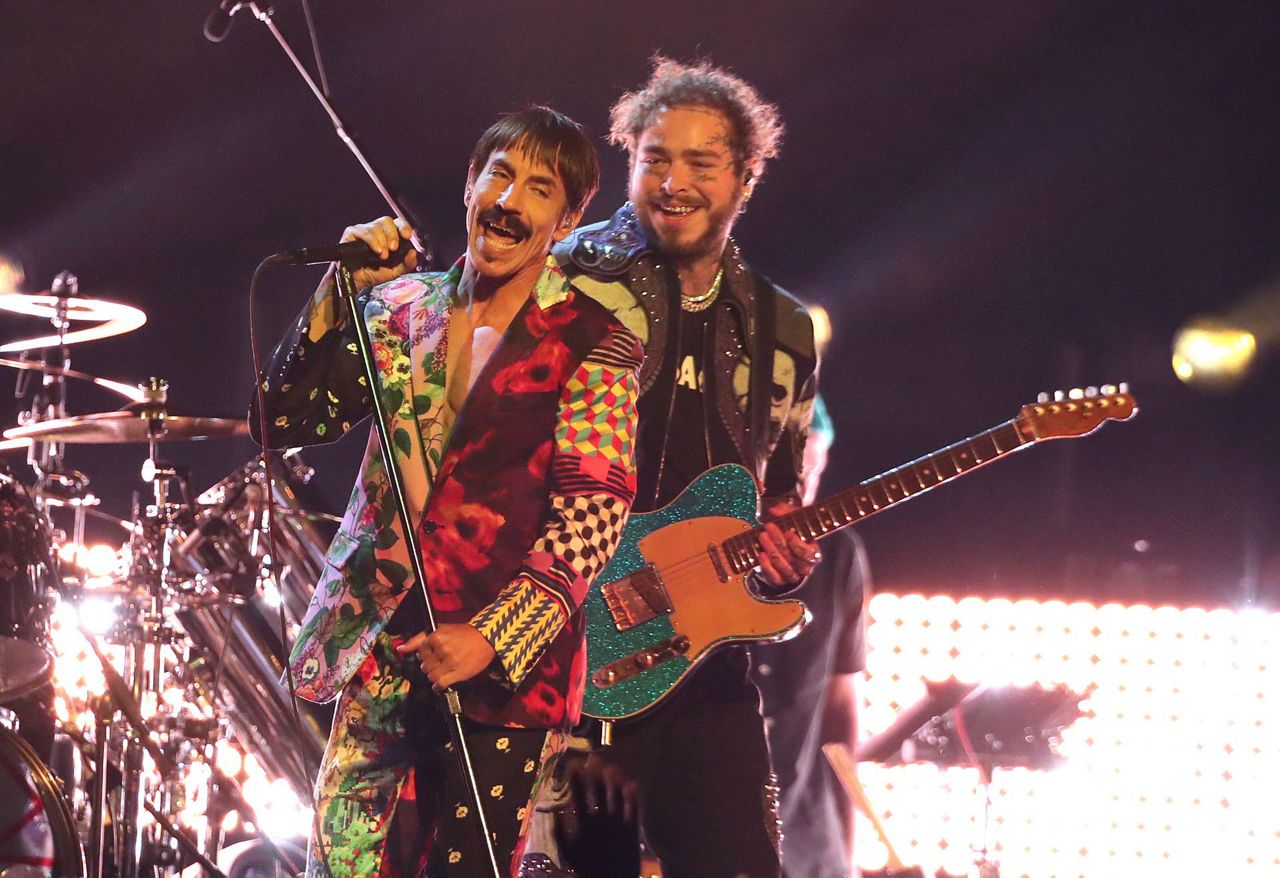 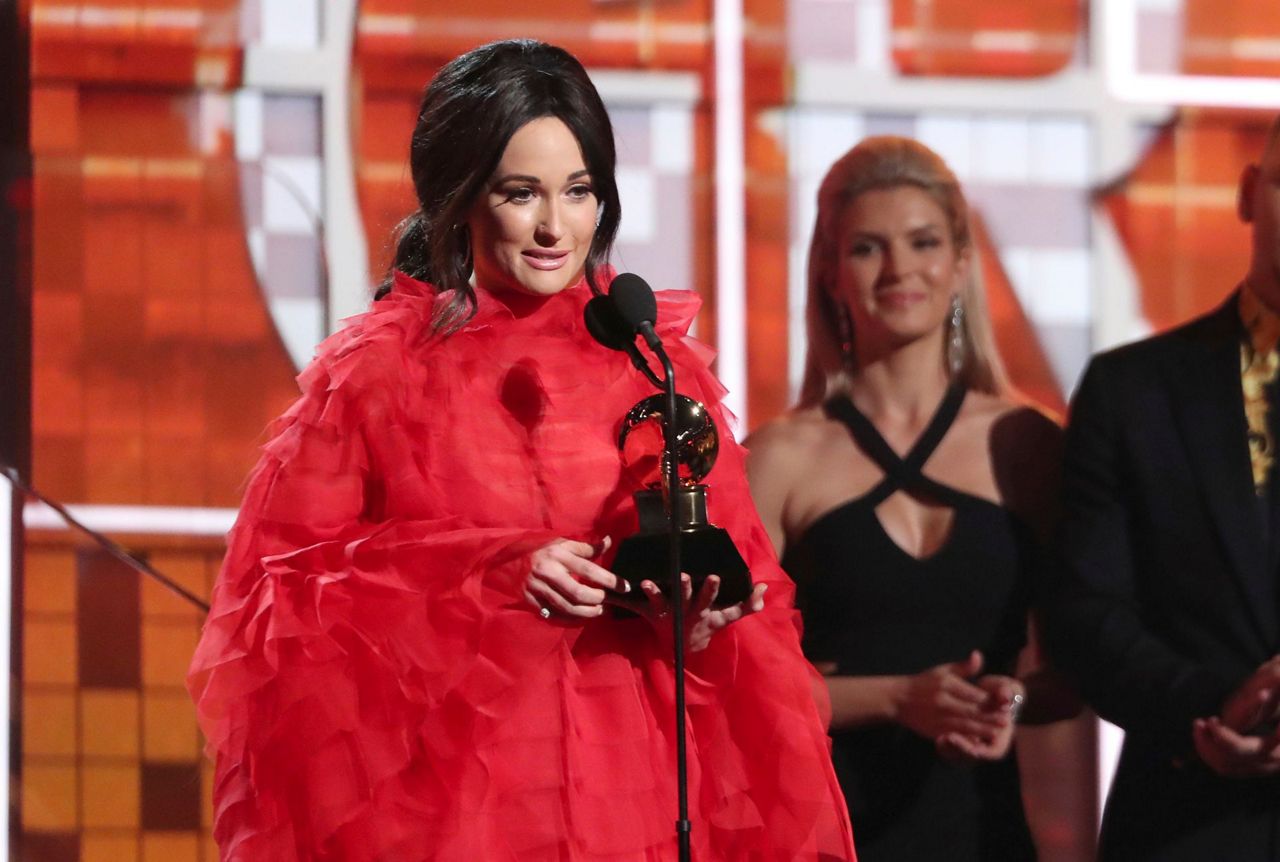 11 of 12
Kacey Musgraves accepts the award for best country album for "Golden Hour" at the 61st annual Grammy Awards on Sunday, Feb. 10, 2019, in Los Angeles. (Photo by Matt Sayles/Invision/AP) 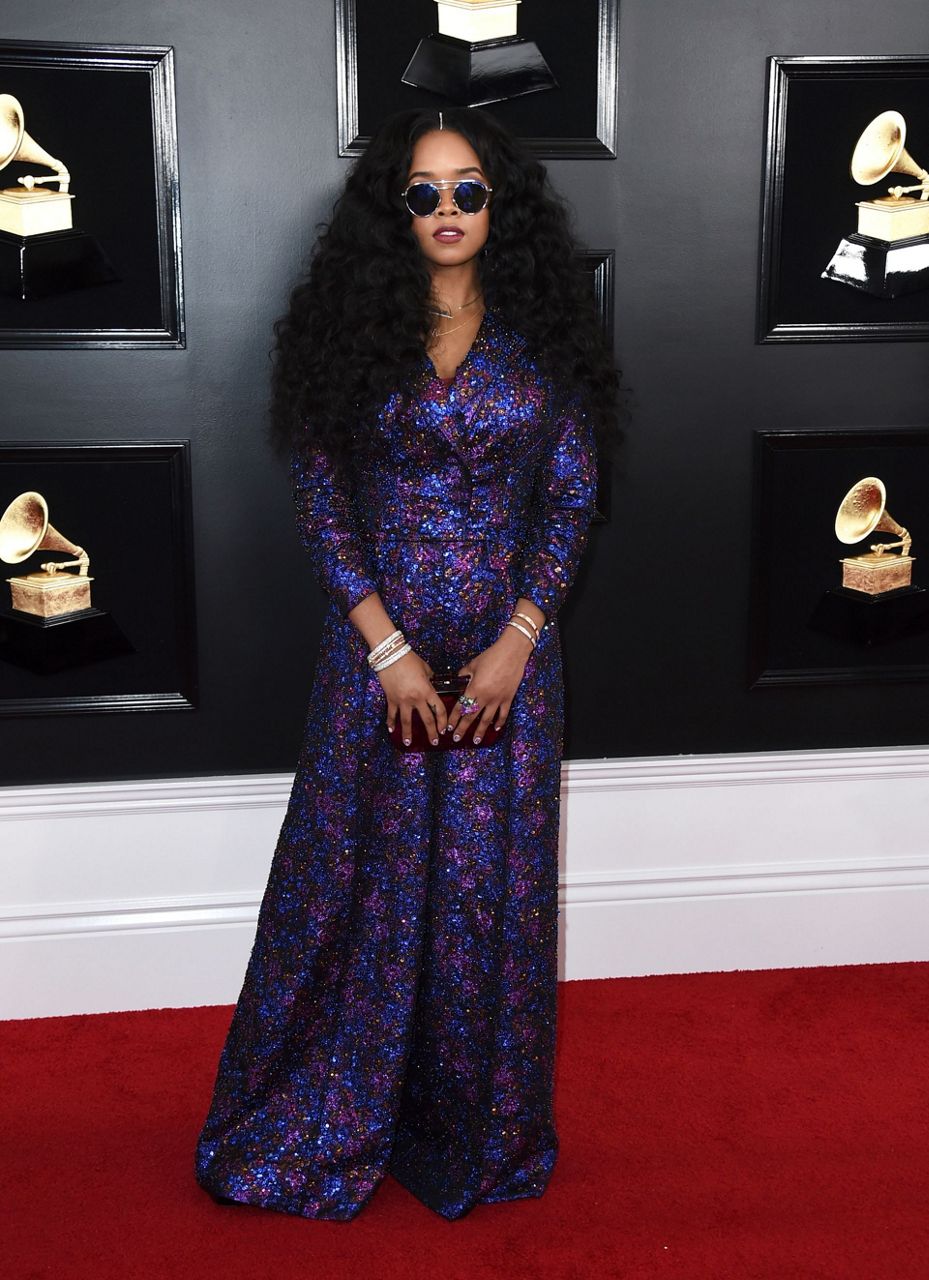 LOS ANGELES (AP) — Drake surprised the music world Sunday when he emerged on the Grammy stage to accept the best rap song trophy but told the room of musicians that winning awards isn't necessary if you have real fans attending your concerts and singing your songs.

"You've already won if you have people who are singing your songs word for word, if you're a hero in your hometown. Look, if there are people who have regular jobs who are coming out in the rain and the snow, spending their hard-earned money to buy tickets to come to your shows, you don't need this right here. I promise you. You already won," he said at the Staples Center in Los Angeles.

He tried to continue speaking but was cut off as the ceremony suddenly went to a commercial.

Rap has endured a longtime losing streak at the Grammys. The last time a rapper won album of the year was in 2004, with Outkast. Only a handful of rappers have won best new artist.

Drake has a chance to become the first rapper to win record of the year later in the show. Childish Gambino made history when his track "This is America" became the first rap-based song to win song of the year. Gambino has won three awards so far, including best music video and best rap/sung performance.

The Grammys kicked off with a group of powerful women, including Michelle Obama and Lady Gaga, describing the role of music in their lives — a display that came a year after female voices were somewhat muted at the 2018 ceremony.

"Music has always helped me tell my story," said Obama, who surprised the audience with her appearance. "Whether we like country or rap or rock, music helps us share ourselves. It allows us to hear one another."

Gaga told the crowd: "They said I was weird, that my look, that my choices, that my sound wouldn't work. But music told me not to listen to them."

Jada Pinkett Smith and Jennifer Lopez also spoke and stood in solidary with Obama, Gaga and Alicia Keys, who is hosting the show airing on CBS.

"Yes, ladies," Keys said. "There's nothing better than this."

The opening contrasted with last year's Grammys, where male acts dominated in nominations and the only woman competing for the top award, Lorde, didn't get a chance to perform onstage.

But this year, Gaga, Brandi Carlile and Kacey Musgraves won three Grammys each.

Carlile took three honors in the Americana category and will compete for the three biggest awards during the live show: album, song and record of the year.

Gaga, now a nine-time Grammy winner, won best pop solo performance for "Joanne," while hit "Shallow," from "A Star is Born," was named best song written for visual media. The song is nominated for an Oscar and also won at the Golden Globes, the Critics' Choice Movie Awards and the Satellite Awards.

Women have a strong presence in the top categories. Five of the eight album-of-the-year nominees are women, including Carlile's "By the Way, I Forgive You," Janelle Monae's "Dirty Computer," Cardi B's "Invasion of Privacy," Musgraves' "Golden Hour," and H.E.R.'s self-titled album are also in contention.

When asked about the lack of women in the top categories at the 2018 Grammys, Recording Academy CEO Neil Portnow said women need to "step up." He later acknowledged that it was a "poor choice of words," and his much-criticized remarks forced the academy to launch a new task force focused on inclusion and diversity.

"I never dreamed that this record would be met with such love," she said onstage.

She also gave a shout-out to her husband in the audience, saying she wouldn't have been able to make the album if he "didn't open my heart like you did."

Musgraves performed "Rainbow" from "Golden Hour" during the show, and hit the stage for a second time to honor Dolly Parton. Musgraves and Katy Perry joined forces for "Here You Come Again," later joined by Parton herself. The icon sang a duet version of "Jolene" with Miley Cyrus, who often covers the classic song. But the country music icon truly shined when she sang "Red Shoes," with country foursome Little Big Town providing background vocals.

Diana Ross earned a standing ovation when she emerged onstage in a bright red dress to perform "Reach Out and Touch (Somebody's Hand)" and "The Best Years of My Life." She celebrated her 75th birthday early with the performance, saying afterward, "Happy birthday to me!" Her actual birthday is March 26.

All four acts are nominated for album of the year.

Ariana Grande won her first Grammy in the same week that she publicly blasted Grammys producer Ken Ehrlich and accused him of lying about why she was no longer performing at the show.

"I know i'm not there tonight (trust, i tried and still truly wished it had worked out tbh) and i know i said i try not to put too much weight into these things ... but (expletive) ... this is wild and beautiful," she tweeted after learning about her win.

There was a tie for best rap performance, and Drake was surprisingly not one of the winners. Drake's "Nice for What" lost to Anderson Paak's "Bubblin'" and Kendrick Lamar, Jay Rock, Future and James Blake's "King's Dead," from the "Black Panther" soundtrack.

Beck was a double winner during the pre-telecast, taking home best alternative music album and best engineered album (non-classical) for "Colors." Emily Lazar, one of the engineers who worked on the album and won alongside Beck, said onstage that she was the first female mastering engineer to win in the latter category.