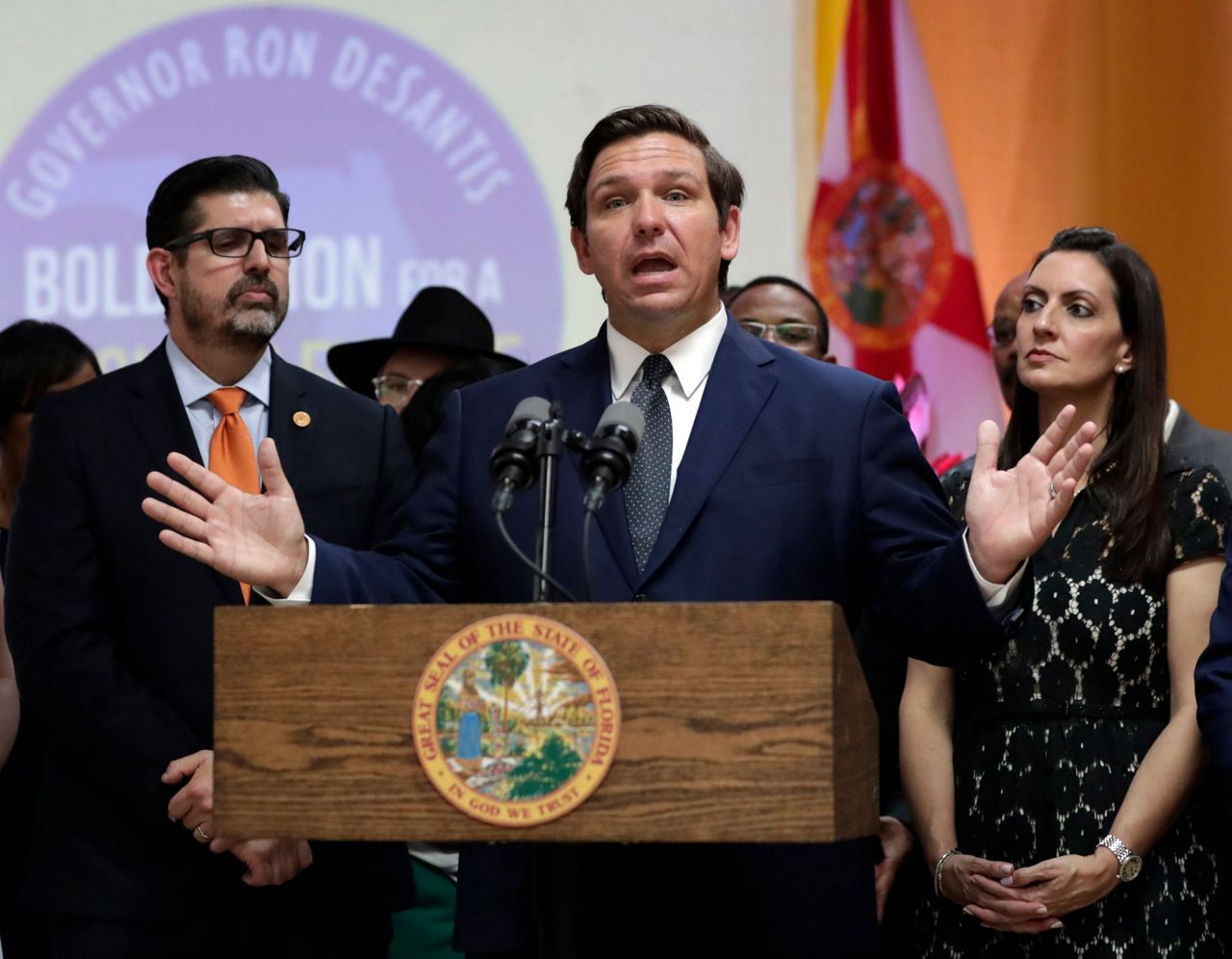 1 of 2
FILE- In this May 9, 2019 file photo. Florida Gov. Ron DeSantis, second from right, speaks during a bill signing ceremony at the William J. Kirlew Junior Academy, in Miami Gardens, Fla. Gov. DeSantis said Friday, May 17, 2019, that he plans to fight a federal plan to fly hundreds of immigrants from the Mexican border to two South Florida counties. He says he'll take his case to President Donald Trump. (AP Photo/Lynne Sladky, File) 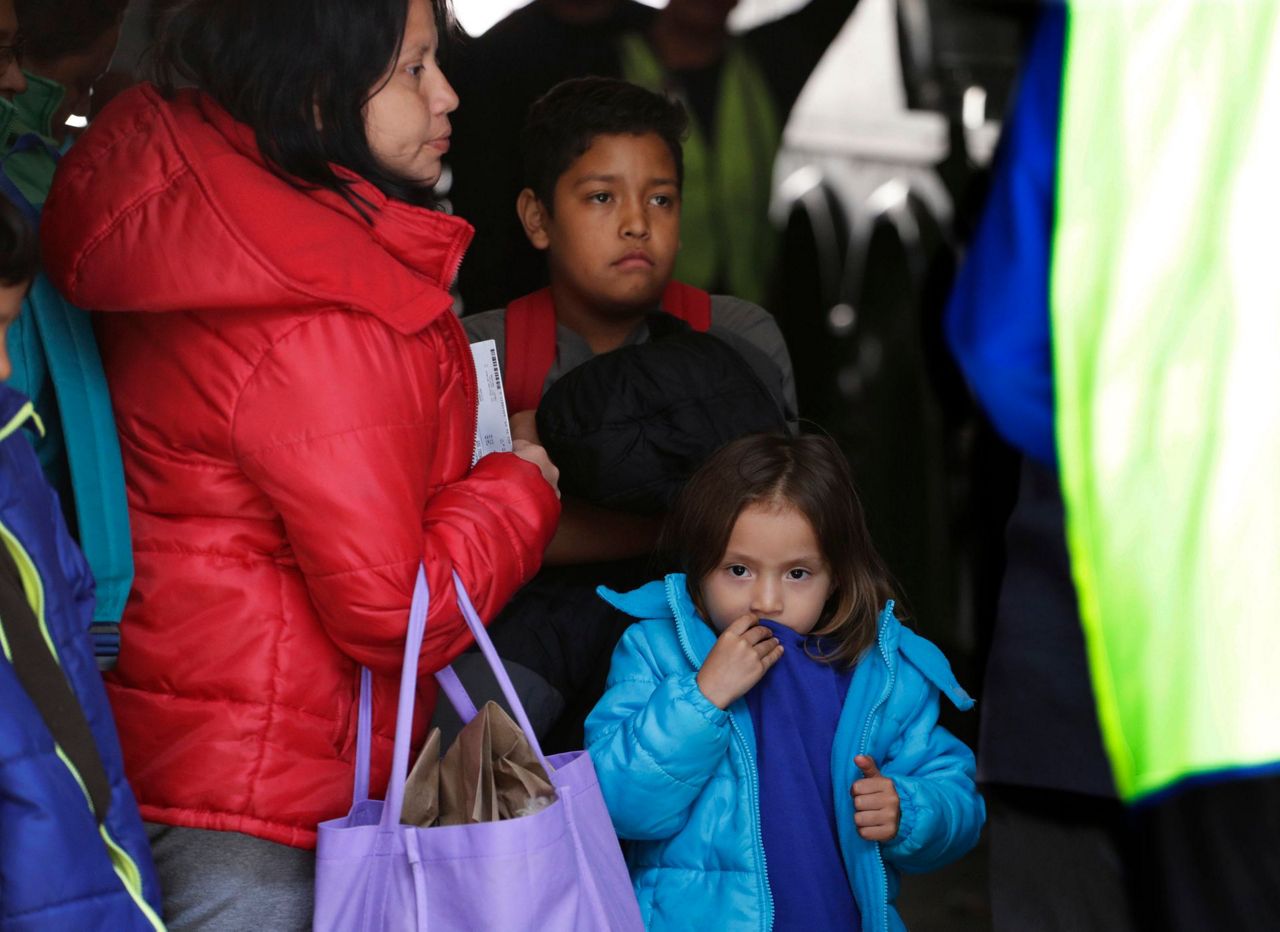 2 of 2
FILE - In this April 2, 2019, file photo, immigrants from Central America seeking asylum board a bus in San Antonio. The Trump administration has alerted two counties in Florida to prepare for an influx of immigrants at the border. The federal government is planning to transport more than 100 immigrants a week to Broward and Palm Beach counties, two predominately Democratic counties in Florida. The administration is providing no funding to house or feed them. (AP Photo/Eric Gay, File)

Republican Gov. Ron DeSantis made his remarks a day after being caught off guard when Broward and Palm Beach county officials said they had been notified by U.S. Border Patrol that about 1,000 migrants per month would be sent to the two counties starting in about two weeks.

Federal officials said Friday there are no immediate plans to fly migrants to Florida.

In San Diego, interim Border Patrol sector chief Douglas Harrison said Friday that the agency was flying migrants to his location, but was still considering whether to add flights to the Detroit, Buffalo and Miami sectors. The agency's Miami sector includes all of South Florida.

Harrison said the agency was exploring issues including the availability of airports and the capacity of charitable groups to provide migrants with temporary assistance.

The federal government has run out of space to process the thousands of migrants who have been arriving at the Texas border, forcing them to fly migrants to Border Patrol facilities in other locations for processing. Once processed, they are released and given a court date in a city where they plan to reside, often with family members. That could be anywhere in the U.S., and many of them would in any case be heading to Latino communities in Florida.

DeSantis told reporters in Sarasota after a bill signing ceremony that he was unaware of any moves to start flights to Florida until county officials reported that to the media Thursday. He said such flights would amount to "dumping" migrants on Florida.

"I think it will tax our resources, the schools, the health care, law enforcement, state agencies," DeSantis said. "It's gonna ultimately be something I'm going to have to talk to the president about."

Trump and DeSantis have a close relationship. Trump's endorsement propelled DeSantis from underdog status to ultimate winner in last year's governor's race, and DeSantis has met with him several times in the White House, securing promises to increase hurricane aid and federal money for Everglades restoration.

DeSantis noted that he recently signed a bill banning sanctuary cities and appeared upset immigrants might be flown to Florida after the pledge to help federal immigration authorities.

"We're going to work with them to help them remove criminal aliens. We're not going to be like some of these other states that are not allowing federal authorities to come into a jail or a courthouse," he said. "We've been very cooperative."

If migrants arrive by flights to Broward and Palm Beach, some may ultimately intend to go to cities outside of South Florida or even out of state. In any case, South Florida authorities said they were bracing for a potential influx.

Tim Gamwell is the assistant executive director of the Guatemalan-Maya Center, an organization that serves nearly 1,000 migrants from over 20 countries a month. He said it is important that Palm Beach County authorities and institutions play an active role in aiding any migrants who end up there.

"If this burden is not shared, if it's placed on small nonprofits and neighborhoods, there is no way that families are going to receive the services that they need without widespread community support," Gamwell said.

Ellis Rua in Miami contributed to this report.