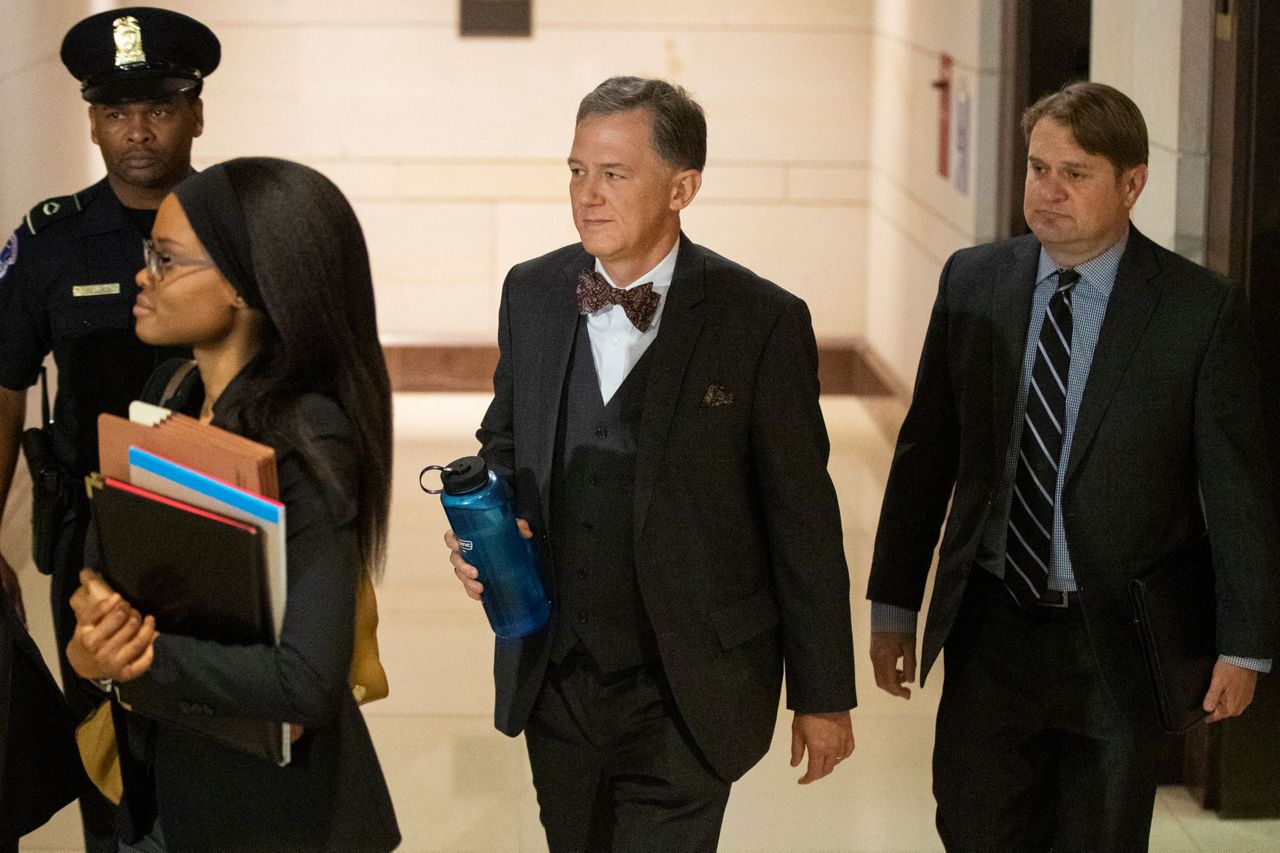 1 of 8
Deputy Assistant Secretary of State George Kent, second from right, arrives to appear before a joint House Committee on Foreign Affairs, Permanent Select Committee on Intelligence, and Committee on Oversight and Reform for a deposition on Capitol Hill in Washington, Tuesday, Oct. 15, 2019. (AP Photo/Manuel Balce Ceneta) 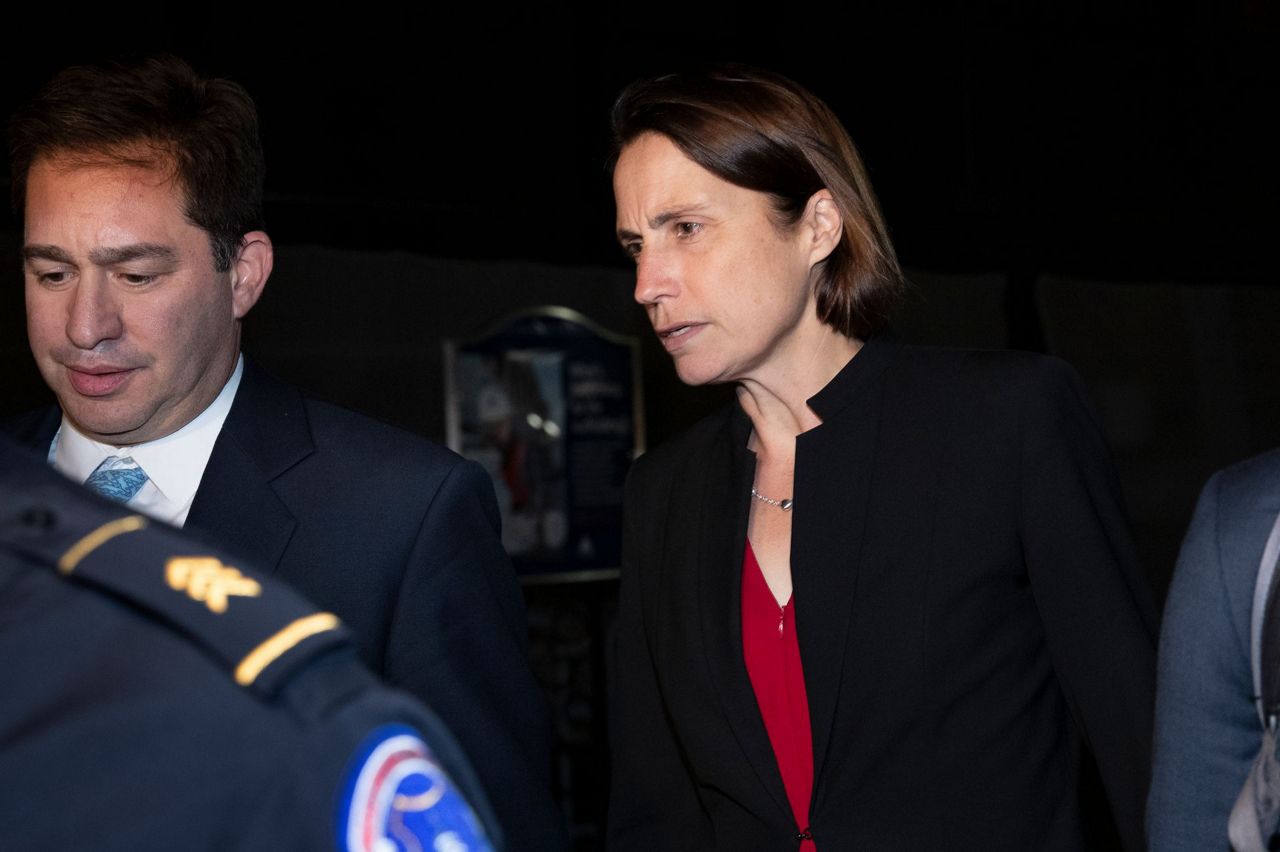 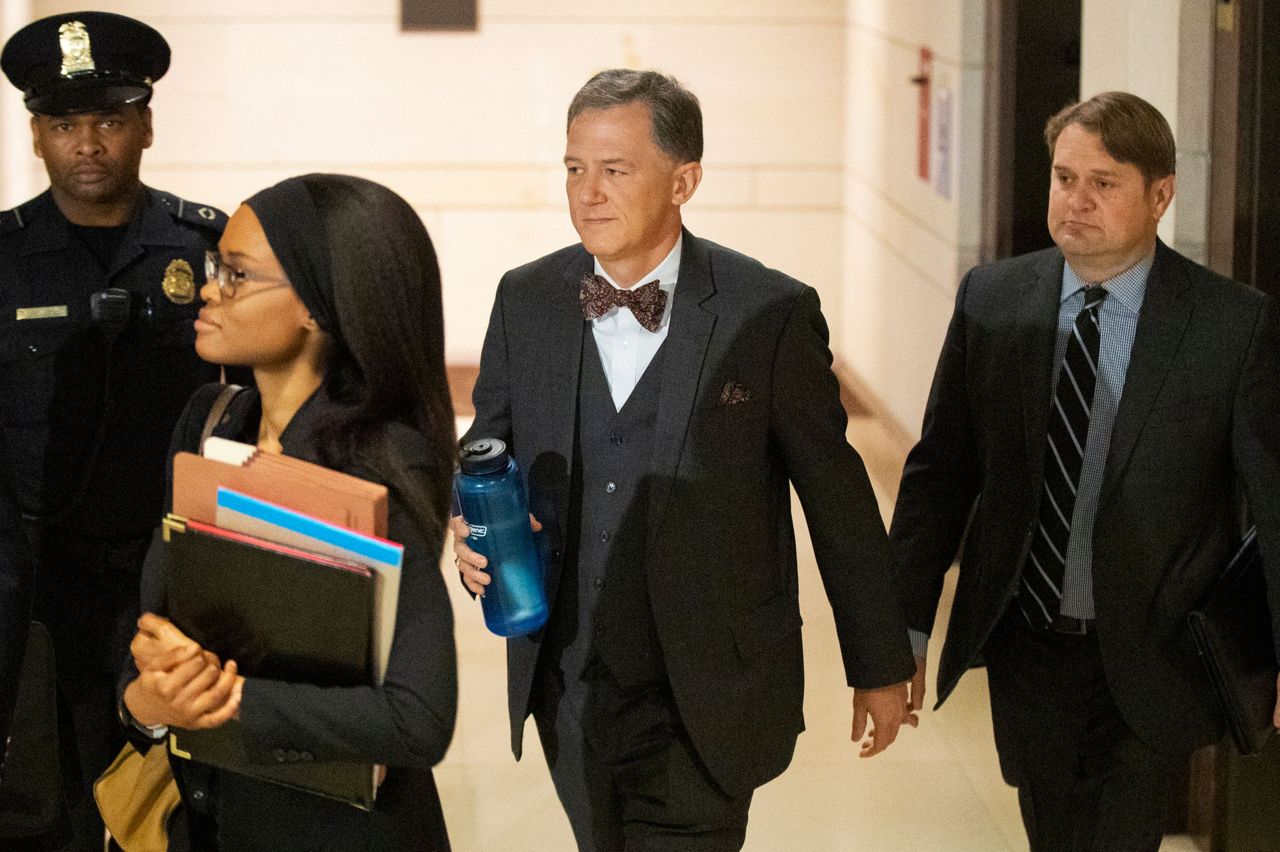 3 of 8
Deputy Assistant Secretary of State George Kent, second from right, arrives to appear before a joint House Committee on Foreign Affairs, Permanent Select Committee on Intelligence, and Committee on Oversight and Reform for a deposition on Capitol Hill in Washington, Tuesday, Oct. 15, 2019. (AP Photo/Manuel Balce Ceneta) 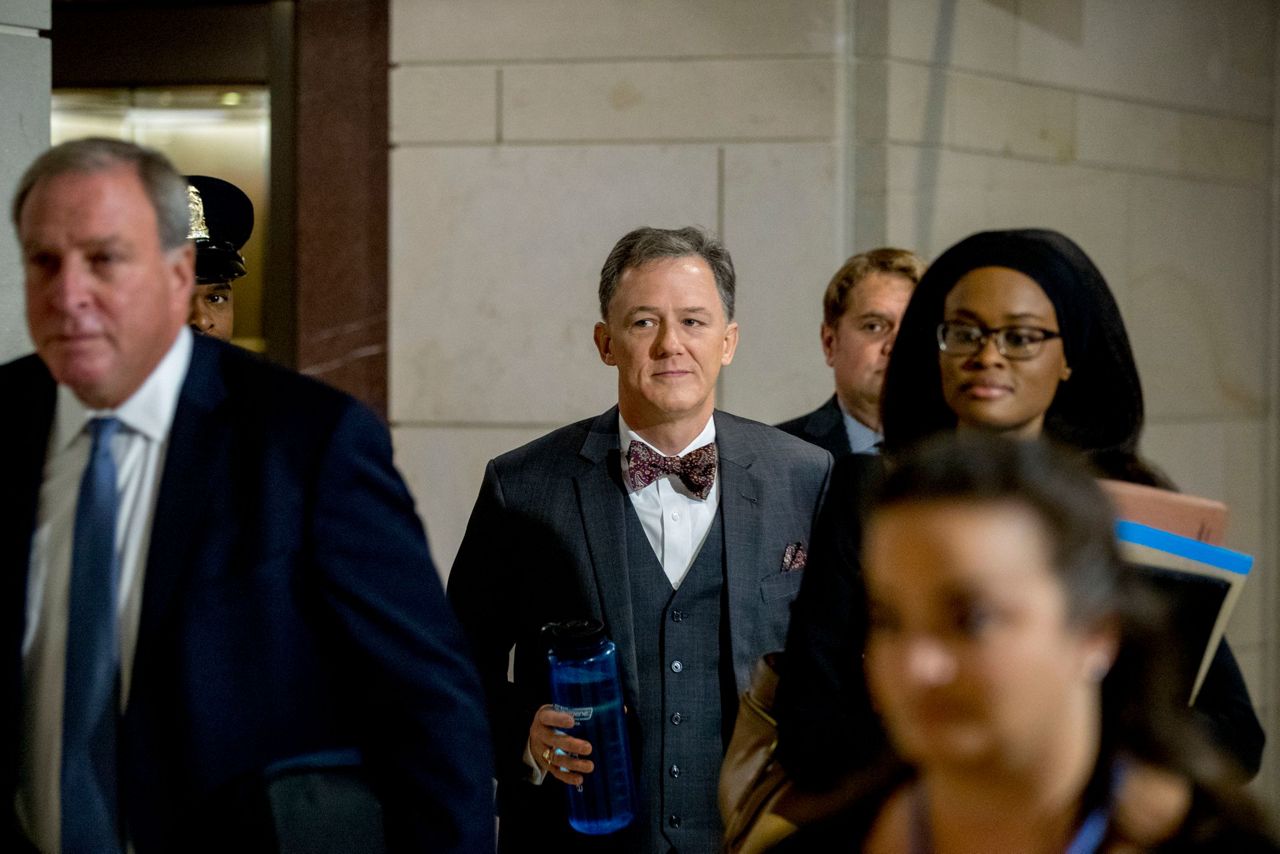 4 of 8
Deputy Assistant Secretary of State George Kent, center, arrives on Capitol Hill in Washington, Tuesday, Oct. 15, 2019, as he is scheduled to testify before congressional lawmakers as part of the House impeachment inquiry into President Donald Trump. (AP Photo/Andrew Harnik) 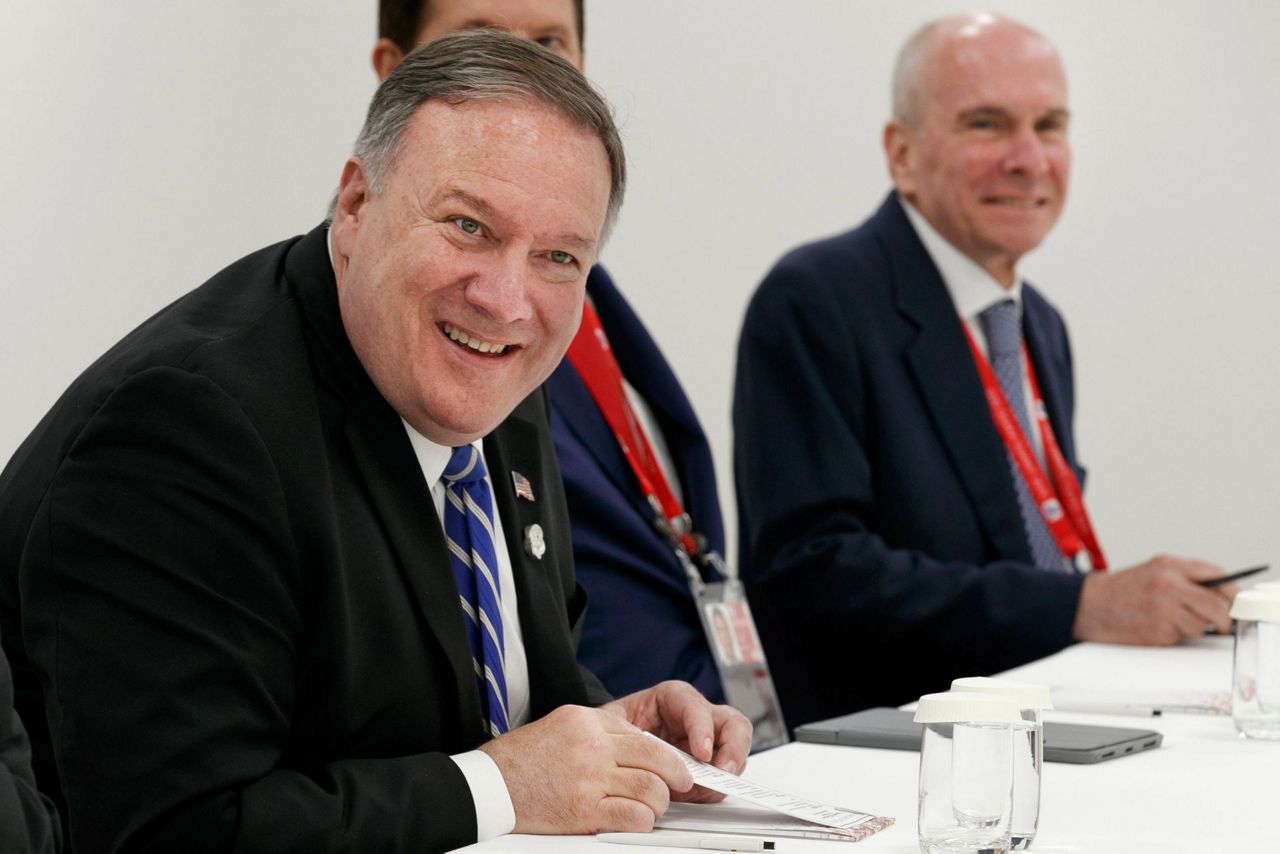 5 of 8
FILE - In this June 28, 2019, file photo, Secretary of State Mike Pompeo, left, sits down for a meeting with Japanese Foreign Minister Taro Kono, in Osaka, Japan, Friday, June 28, 2019, during the G-20 summit, with senior adviser Michael McKinley, right. McKinley has been asked to appear Wednesday, Oct. 16 in the House impeachment inquiry of President Donald Trump, according to several officials familiar with the planning. (AP Photo/Jacquelyn Martin, Pool, File) 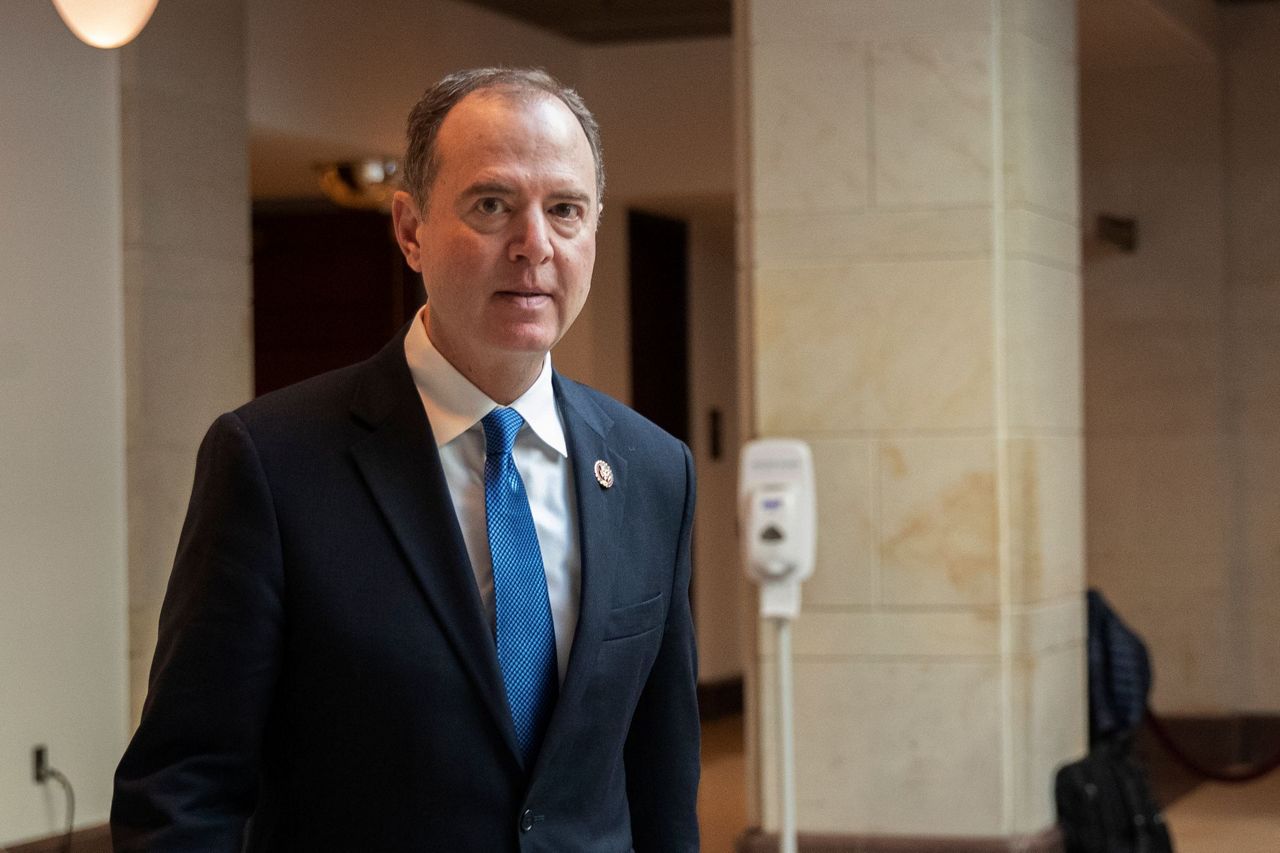 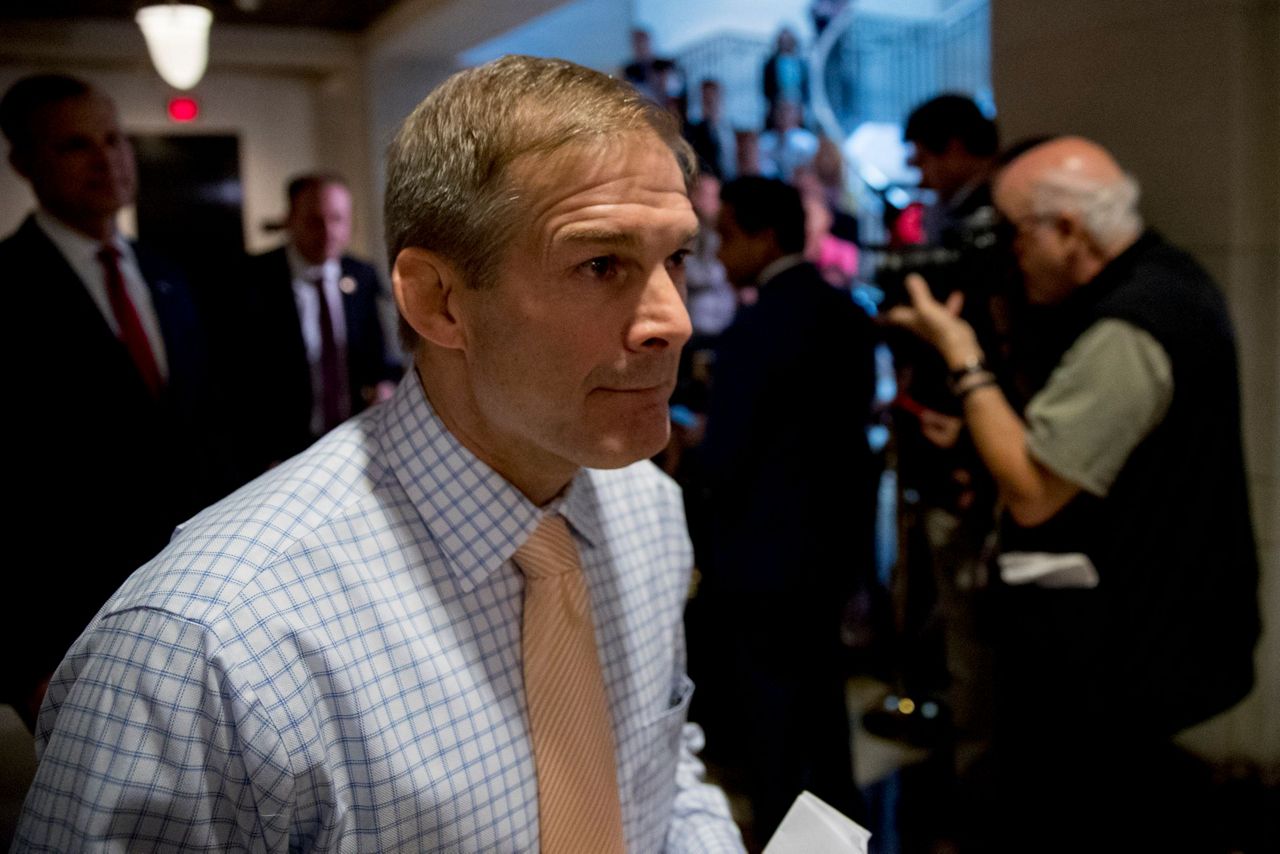 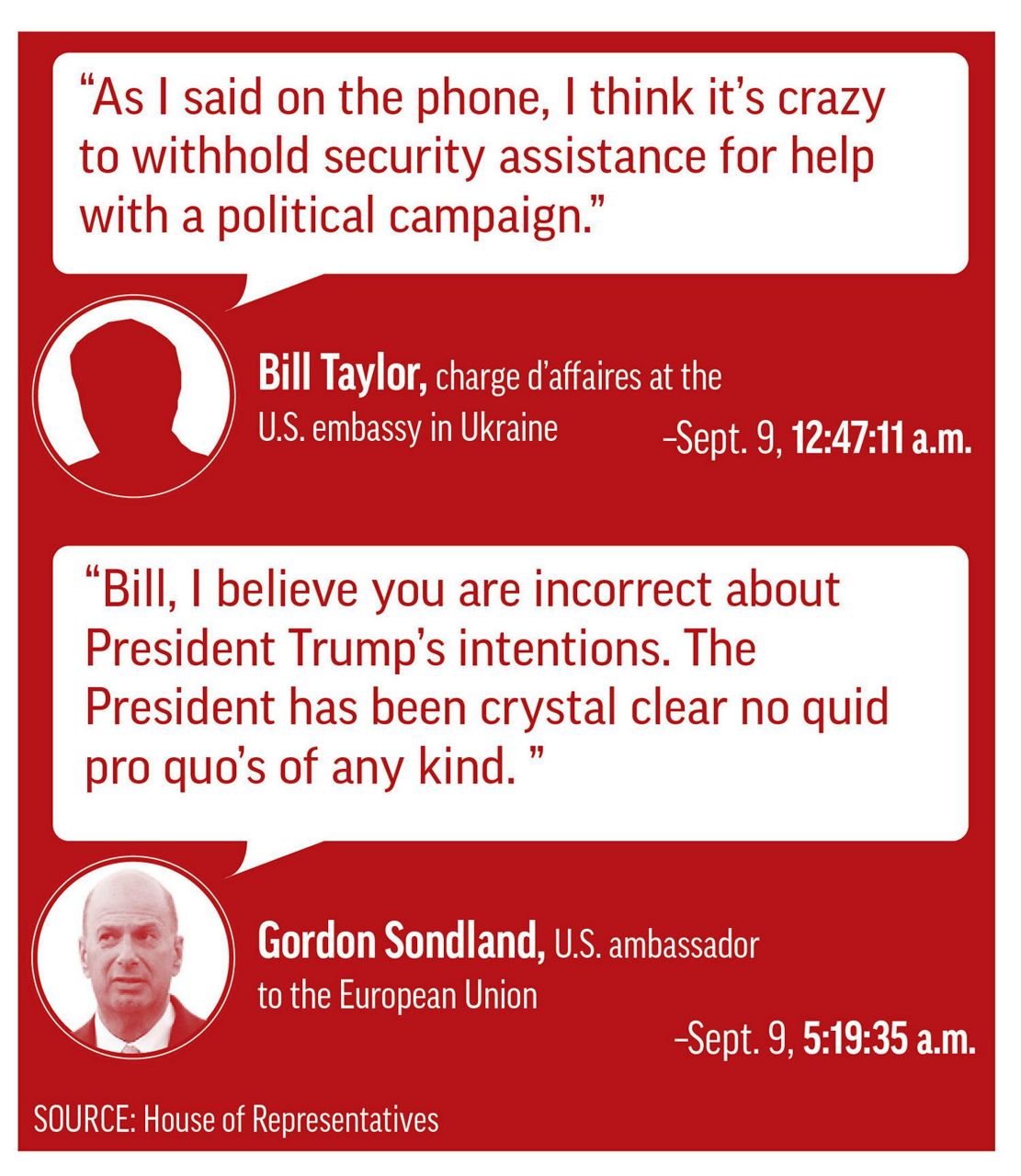 8 of 8
Graphic illustration highlights a text quote between U.S. ambassador to the EU Gordon Sondland and charge d'affaires Bill Taylor in September with a more than four-hour gap in the exchange.;

WASHINGTON (AP) — National security adviser John Bolton was so alarmed by Rudy Giuliani's back-channel activities in Ukraine that he described President Donald Trump's personal lawyer as a "hand grenade who is going to blow everybody up," according to a former White House aide.

The aide, Fiona Hill, testified for more than 10 hours on Monday as part of the Democrats' impeachment probe into Trump's dealings with Ukraine. She detailed Bolton's concerns to lawmakers and told them that she had at least two meetings with National Security Council lawyer John Eisenberg about the matter at Bolton's request, according to a person familiar with the testimony who requested anonymity to discuss the confidential interview.

Those meetings took place in early July, weeks before a July 25 phone call between Trump and Ukrainian President Volodymyr Zelenskiy, in which Trump urged that Zelenskiy investigate political rival Joe Biden's family and Ukraine's own involvement in the 2016 presidential election.

A whistleblower complaint about that call, later made public, prompted House Speaker Nancy Pelosi to launch the impeachment inquiry. Giuliani is Trump's personal lawyer and was heavily involved in the effort to pressure Ukraine on the investigations.

Hill also told the investigators that she had strongly and repeatedly objected to the ouster earlier this year of the former U.S. ambassador to Ukraine, Marie Yovanovitch, according to the person familiar with the testimony. Yovanovitch testified to the impeachment investigators Friday that Trump pressured the State Department to fire her.

Hill's interview, like the others conducted by House impeachment investigators, took place behind closed doors. On Tuesday, Deputy Assistant Secretary of State George Kent was testifying.

Kent was among those who expressed concern about the campaign against Yovanovitch and thought she was the victim of a disinformation operation, according to a current State Department official unauthorized to discuss the situation and granted anonymity

Kent raised concerns about the "fake news smear" against Yovanovitch months before her ouster in May, according to emails obtained by The Associated Press.

In the emails from March, Kent shares with other State Department officials a "daily update of the fake news driven smear out of Ukraine." The emails include news reports and other commentary, some from U.S. journalists, that "goes after Masha," as Yovanovitch was known.

Hill, a top adviser on Russia, also discussed U.S. ambassador Gordon Sondland and acting White House chief of staff Mick Mulvaney, the person said, telling the three committees leading the investigation that Bolton also told her he was not part of "whatever drug deal Sondland and Mulvaney are cooking up," an apparent reference to talks over Ukraine.

She quoted Bolton, whom Trump forced out last month, as saying in one conversation that Giuliani was "a hand grenade who's going to blow everybody up."

Sondland is expected to appear for a deposition under subpoena Thursday and will certainly be asked about those talks.

There are five more scheduled this week, mostly with State Department officials, though it is unclear if they will all appear after Trump declared he wouldn't cooperate with the probe.

Sondland is expected to tell Congress that a text message released earlier this month reassuring another envoy that there was no quid pro quo in their interactions with Ukraine was based solely on what Trump told him, according to a person familiar with his coming testimony.

The cache of text messages was provided by one of the inquiry's first witnesses, former Ukrainian envoy Kurt Volker, and detailed attempts by the diplomats to serve as intermediaries around the time Trump urged Zelenskiy to start the investigations into a company linked to Biden's son.

While interviews have focused on the interactions with Ukraine, the probe could broaden as soon as next week to include interviews with White House budget officials who may be able to shed light on whether military aid was withheld from Ukraine as Trump and Giuliani pushed for the investigations.

The three committees leading the probe are seeking interviews next week with Russell Vought, acting director of the Office of Management and Budget, and Michael Duffey, another OMB official who leads national security programs, according to a person familiar with those requests. That person wasn't authorized to discuss the invitations and requested anonymity.

The packed schedule of interviews comes as Democrats are methodically working to pin down the details of Trump's pressure on Zelenskiy. Once Democrats have completed the probe and followed any other threads it produces, they will use their findings to help determine whether to vote on articles of impeachment. Pelosi said she wants the committees to move "expeditiously."

The committees are also scheduled to talk to Ulrich Brechbuhl, a State Department counselor, on Thursday. On Friday, the lawmakers have scheduled an interview with Laura Cooper, Deputy Assistant Secretary of Defense for Russia, Ukraine and Eurasia. It is unclear if any of those officials will show up after Trump's vow of non-cooperation.

Because of the Trump administration's edict, the Democrats have been subpoenaing witnesses as they arrived for their interviews — a move sometimes known as a "friendly" subpoena that could give the witnesses additional legal protection as they testify. Both Yovanovitch and Hill received subpoenas the mornings of their testimony, and Kent was subpoenaed for Tuesday's interview, officials said.

One witness who may not be called before Congress is the still-anonymous government whistleblower who touched off the impeachment inquiry.

Republicans complained Tuesday that the whistleblower's identity should be made available.

"The question I keep coming back to is why don't we know who this individual is?" Rep. Jim Jordan, R-Ohio said Tuesday. "I mean they're basing an impeachment process, trying to remove the president of the United States based on some anonymous whistleblower again with no first-hand knowledge."

Top Democrats say testimony and evidence coming in from other witnesses, and even the Republican president himself, are backing up the whistleblower's account of what transpired during Trump's July 25 phone call with Zelenskiy. Lawmakers have grown deeply concerned about protecting the person from Trump's threats and may not wish to risk exposing the whistleblower's identity.