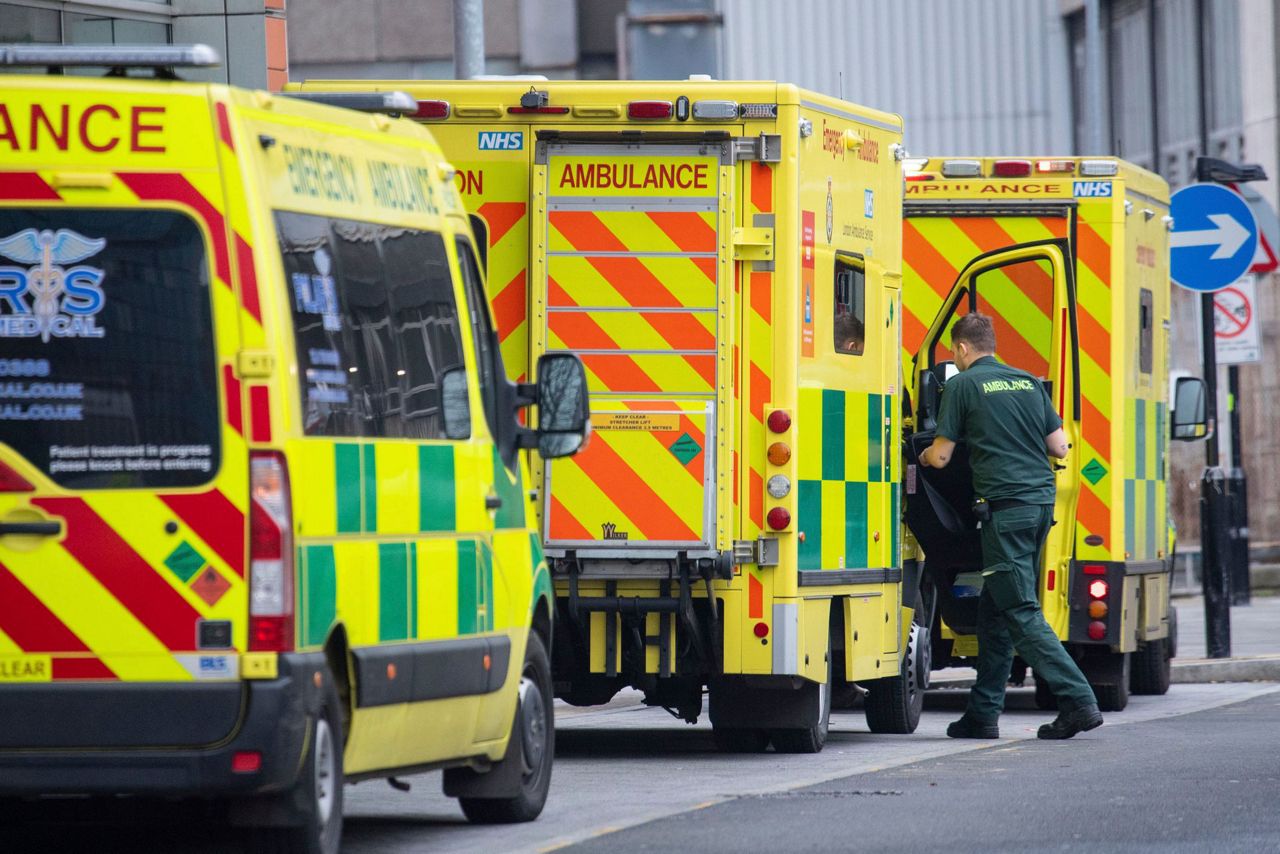 1 of 3
Ambulances outside the Royal London Hospital, in London, Tuesday Dec. 29, 2020. England Health Service figures show hospitals now have more Covid-19 patients than during April's first-wave peak, with fears of increased figures because of a Christmas social spread still to come. (Dominic Lipinski/PA via AP) 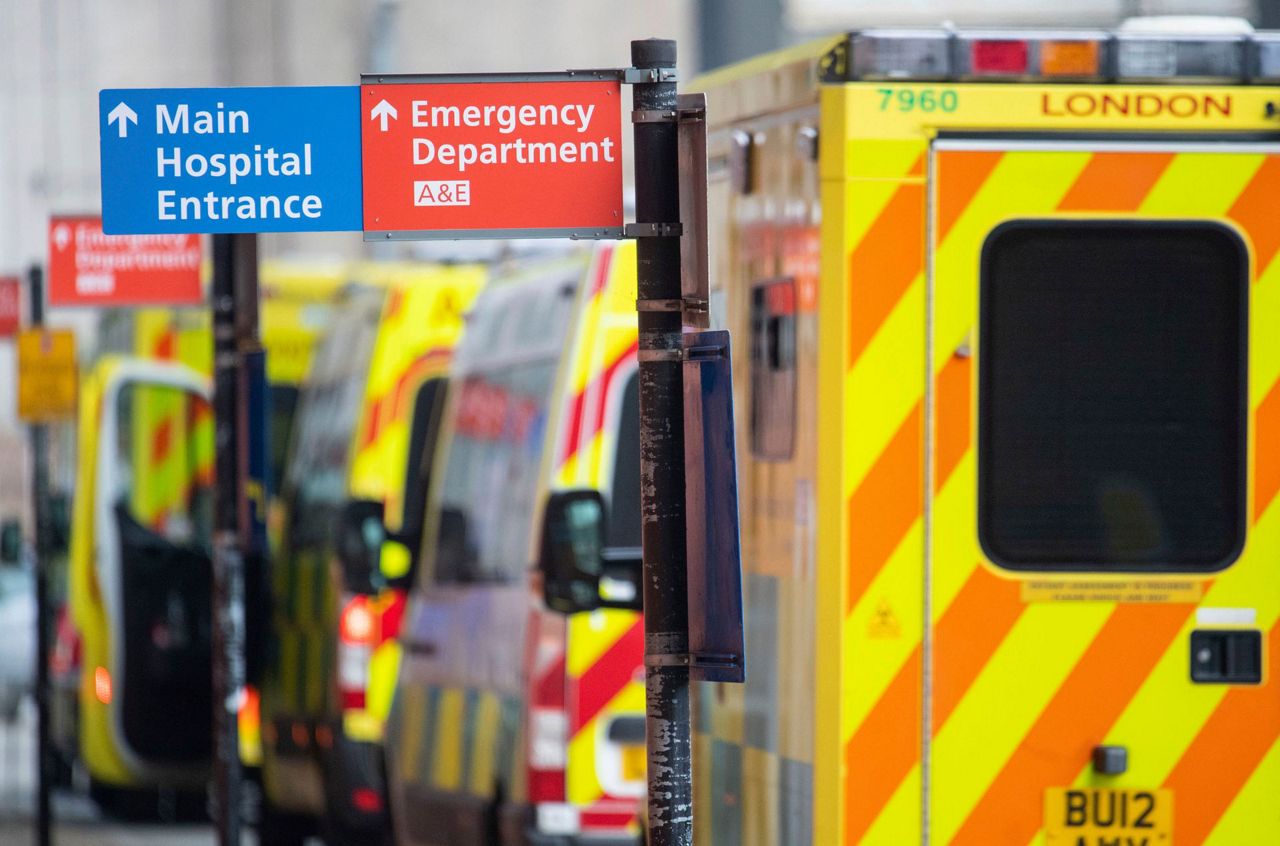 2 of 3
Ambulances outside the Royal London Hospital, in London, Tuesday Dec. 29, 2020. England Health Service figures show hospitals now have more Covid-19 patients than during April's first-wave peak, with fears of increased figures because of a Christmas social spread. (Dominic Lipinski/PA via AP) 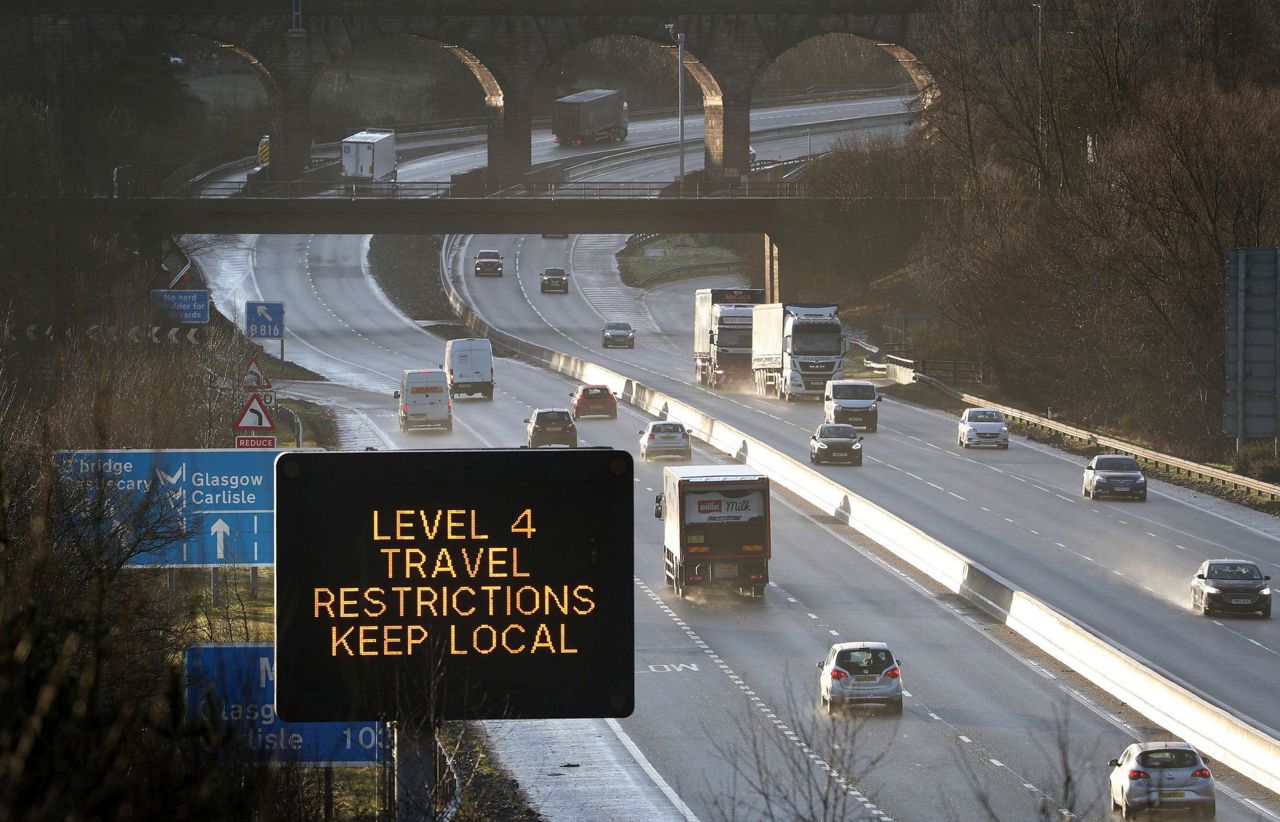 3 of 3
A traffic information board advises drivers to keep their travel to local trips because of coronavirus Level 4 restrictions, as traffic moves along the M80 motorway near Banknock, Scotland, Tuesday Dec. 29, 2020. Scotland has imposed more severe COVID-19 lockdown restrictions for several weeks. (Andrew Milligan/PA via AP)

LONDON (AP) — British officials are considering tougher coronavirus restrictions as the number of hospitalized COVID-19 patients surpasses the first peak of the outbreak in the spring.

Authorities are blaming a new, more transmissible variant of the virus, first identified in southeast England, for the soaring infection rates. An area home to almost half of the people in England is under tight restrictions on movement and everyday life in an attempt to curb the spread of the virus. Nonessential shops are shut along with gyms and swimming pools, indoor socializing is barred and restaurants and pubs can only offer takeout.

Prime Minister Boris Johnson plans to hold a meeting of his COVID-19 crisis committee later Tuesday. Health Secretary Matt Hancock is scheduled to update Parliament on Wednesday on whether more areas will be put into Tier 4 — the top level of lockdown measures — and whether the restrictions could be tightened even further.

Hospitals in the worst-hit areas of London and southern England are becoming increasingly overstretched, with ambulances unable to unload patients at some hospitals because all beds are full. A growing number of National Health Service staff are off work because they are sick with the virus or self-isolating.

England had 20,426 coronavirus patients in hospitals as of Monday morning — the last day for which figures are available — compared to its previous high of 18,974 on April 12. Britain has recorded more than 71,000 confirmed coronavirus deaths, the second-highest death toll in Europe after Italy.

A further 414 deaths were reported Tuesday, along with a record 53,135 new cases, although that figure may include a backlog from the Christmas holiday period.

“We felt during April that there would be an end to this. But actually, we’re now seeing a third peak so trying to keep our colleagues and our teams going through this time is just incredibly difficult,” he told the BBC.

“The situation is untenable and I think we are very close to becoming overwhelmed,” she said.

Some scientists are urging Johnson's Conservative government to postpone plans to reopen schools next week after the Christmas break. The government plans to test students regularly for the virus and 1,500 armed forces personnel have been called in to support schools as they organize the testing.

Andrew Hayward, a professor of infectious diseases epidemiology at University College London, said the fast-spreading virus variant meant that for U.K. schools to reopen, other sectors would have to close.

“We’re going to have to have increased, strict restrictions in other areas of society to pay for that,” he said.

Simon Stevens, chief executive of the NHS, said health care workers were back in “the eye of the storm” as they had been in the spring.

Stevens said the coronavirus vaccines provided hope, and estimated that all vulnerable people in Britain could be inoculated against the virus by late spring 2021. So far, more than 600,000 people in the U.K. have been given a shot of a vaccine developed by U.S. drugmaker Pfizer and German firm BioNTech, out of a population of 67 million.

On Tuesday some of the first people in the U.K. to be inoculated received their second and final injection.

Margaret Keenan, 91, who on Dec. 8 became the first person in the world to receive a rigorously tested COVID-19 vaccine, had the follow-up shot at a hospital in the central England city of Coventry.

The Pfizer-BioNTech vaccine is given in two doses three weeks apart. Its developers say it conferred 95% immunity in clinical trials.

Officials and medics hope U.K. regulators will soon authorize a second coronavirus vaccine for use in Britain. The Medicines and Healthcare Products Regulatory Agency is assessing a vaccine made by AstraZeneca and Oxford University. Media reports say authorization for that could come this week and vaccinations with it could begin next week.