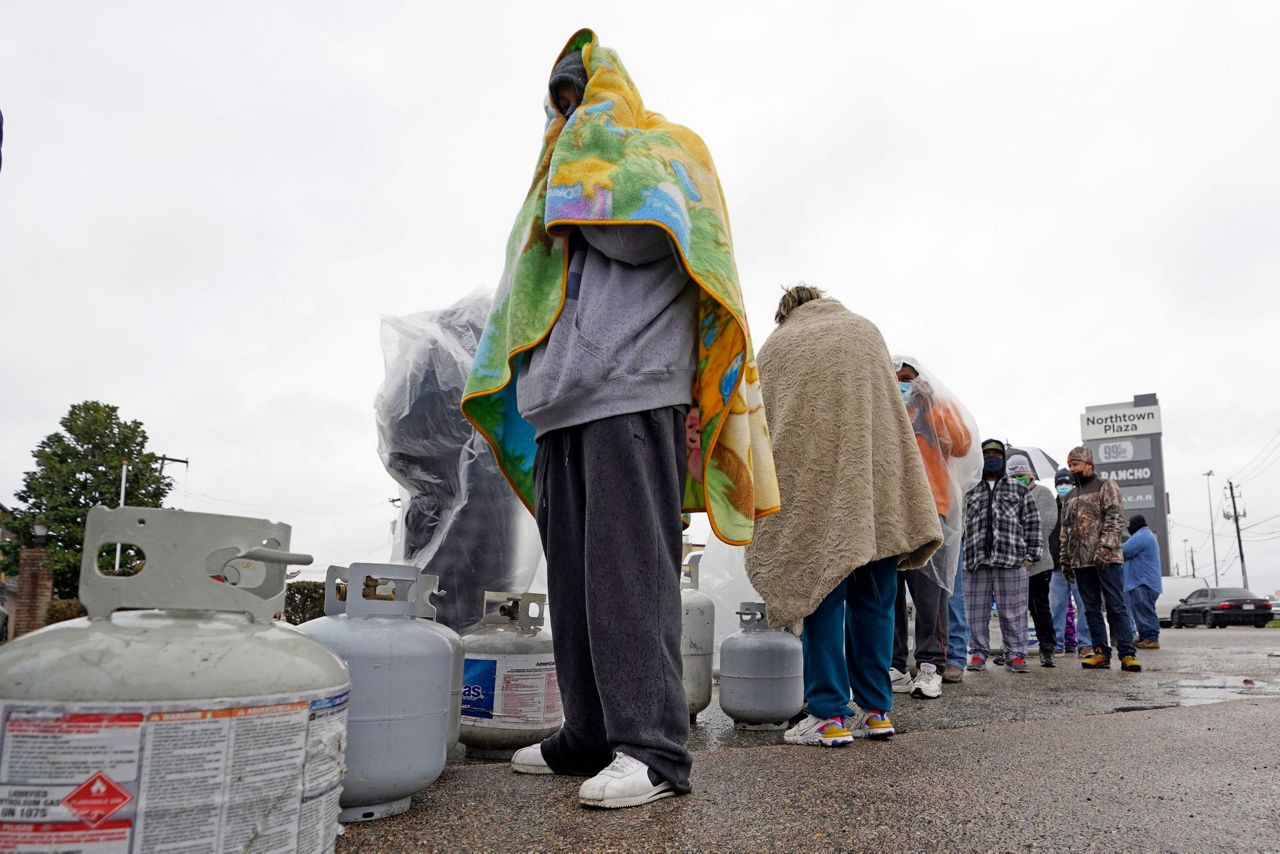 Carlos Mandez waits in line to fill his propane tanks Wednesday, Feb. 17, 2021, in Houston. Customers had to wait over an hour in the freezing rain to fill their tanks. Millions in Texas still had no power after a historic snowfall and single-digit temperatures created a surge of demand for electricity to warm up homes unaccustomed to such extreme lows, buckling the state's power grid and causing widespread blackouts. (AP Photo/David J. Phillip)

EXPLAINER: Why the power grid failed in Texas and beyond

DALLAS (AP) — The power outages tormenting Texas in uncharacteristically Arctic temperatures are exposing weaknesses in an electricity system designed when the weather's seasonal shifts were more consistent and predictable — conditions that most experts believe no longer exist.

This isn't just happening in Texas, of course. Utilities from Minnesota to Mississippi have imposed rolling blackouts to ease the strain on electrical grids buckling under high demand during the past few days. And power outages have become a rite of summer and autumn in California, partly to reduce the chances of deadly wildfires.

But the fact more than 3 million bone-chilled Texans have lost their electricity in a state that takes pride in its energy independence underscores the gravity of a problem that is occurring in the U.S. with increasing frequency.

WHAT HAPPENED IN TEXAS?

Plunging temperatures caused Texans to turn up their heaters, including many inefficient electric ones. Demand spiked to levels normally seen only on the hottest summer days, when millions of air conditioners run at full tilt.

But planning for this winter didn’t imagine temperatures cold enough to freeze natural gas supply lines and stop wind turbines from spinning. By Wednesday, 46,000 megawatts of power were offline statewide — 28,000 from natural gas, coal and nuclear plants and 18,000 from wind and solar, according to the Electric Reliability Council of Texas, which operates the state’s power grid.

“Every one of our sources of power supply underperformed," Daniel Cohan, an associate professor of civil and environmental engineering at Rice University in Houston, tweeted. “Every one of them is vulnerable to extreme weather and climate events in different ways. None of them were adequately weatherized or prepared for a full realm of weather and conditions."

That raised questions whether some power generators who buy in the wholesale market may have had a profit motive to avoid buying more natural gas and simply shut down instead.

“We can’t speculate on people’s motivations in that way,” said Bill Magness, CEO of ERCOT. He added he had been told by generators that they were doing everything possible to provide power.

WHY WASN'T THE STATE PREPARED?

Gas-fired plants and wind turbines can be protected against winter weather — it’s done routinely in colder, northern states. The issue arose in Texas after a 2011 freeze that also led to power-plant shutdowns and blackouts. A national electric-industry group developed winterization guidelines for operators to follow, but they are strictly voluntary and also require expensive investments in equipment and other necessary measures.

An ERCOT official, Dan Woodfin, said plant upgrades after 2011 limited shutdowns during a similar cold snap in 2018, but this week’s weather was “more extreme.”

Ed Hirs, an energy fellow at the University of Houston, rejected ERCOT’s claim that this week’s freeze was unforeseeable.

“That’s nonsense,” he said. “Every eight to 10 years we have really bad winters. This is not a surprise.”

In California, regulators last week ordered the state’s three major utilities to increase their power supply and potentially make plant improvements to avoid another supply shortage like the one that cropped up in California six months ago and resulted in rolling blackouts affecting about 500,000 people for a few hours at a time.

“One big difference is that leadership in California recognizes that climate change is happening, but that doesn’t seem to be the case in Texas,” said Severin Borenstein, a professor of business administration and public policy at the University of California, Berkeley who has been studying power supply issues for more than 20 years.

WHY THE NEED FOR ROLLING BLACKOUTS?

Grid operators say rolling blackouts are a last resort when power demand overwhelms supply and threatens to create a wider collapse of the whole power system.

Usually, utilities black out certain blocks or zones before cutting off power to another area, then another. Often areas with hospitals, fire stations, water-treatment plants and other key facilities are spared.

By rolling the blackouts, no neighborhoods are supposed to go an unfairly long period of time without power, but that was not always the case this week in Texas. Some areas never lost power, while others were blacked out for 12 hours or longer as temperatures dipped into the single digits.

WHEN DO THEY OCCUR?

Rolling blackouts are usually triggered when reserves fall below a certain level. In Texas, as in California last August, grid operators tell utilities to reduce load on the entire system, and it is up to the utilities to decide how to do that.

In Texas this week, grid operators and utilities knew about the dire weather forecast for at least a week. Last weekend they issued appeals for power conservation, and ERCOT tweeted that residents should “unplug the fancy new appliances you bought during the pandemic and only used once."

The lighthearted attempts at humor were lost on residents, few if any of whom were told in advance when their homes would lose power. Once the outages started, some utilities were unable to provide information about how long they might last.

WHAT CAN BE DONE TO REDUCE ROLLING BLACKOUTS?

Start with the obvious steps: When power companies or grid operators warn about trouble coming, turn down your thermostat and avoid using major appliances. Of course, those steps are sometimes easier said than done, especially during record-breaking temperatures.

Like in other places, Texans might be more willing to adjust their thermostats a few more notches if regulators imposed a system that required households to pay higher prices during periods of peak demand and lower rates at other times.

“People turn up their furnaces now because there isn't a financial incentive for them not to do it," Borenstein said.

Experts also say more fundamental — and costly — changes must be made. Generators must insulate pipelines and other equipment. Investments in electricity storage and distribution would help. Tougher building codes would make homes in places like Texas better insulated against the cold.

Texas, which has a grid largely disconnected from others to avoid federal regulation, may have to rethink the go-it-alone strategy. There could be pressure for the state to require power generators to keep more plants in reserve for times of peak demand, a step it has so far resisted.

“The system as we built it is not performing to the standards we would like to see,” said Joshua Rhodes, an energy researcher at the University of Texas in Austin. “We need to do a better job. If that involves paying more for energy to have more reliability, that’s a conversation we’re going to have to have.”