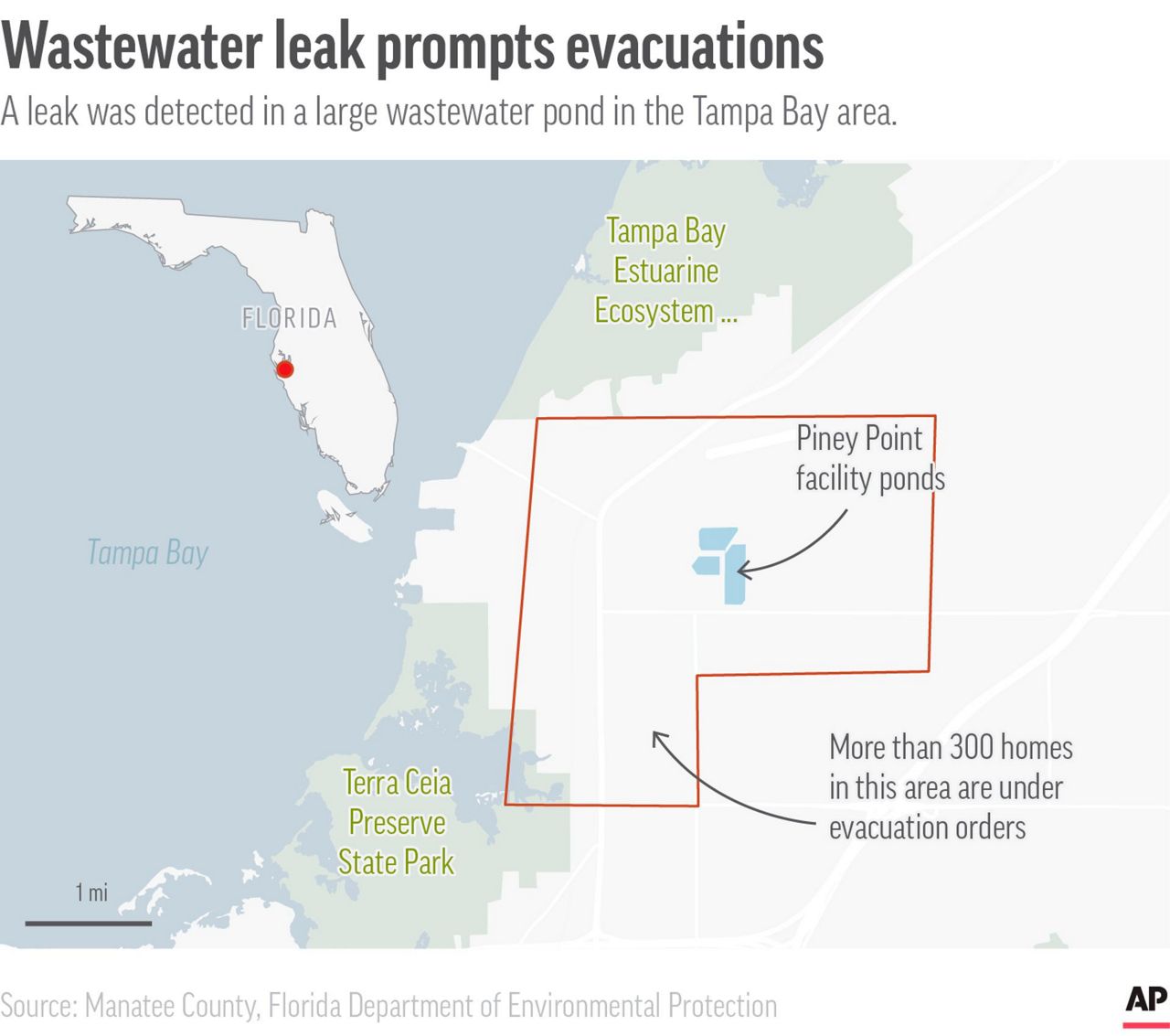 1 of 3
Map locates the Piney Point facility pond that is leaking contaminated water. 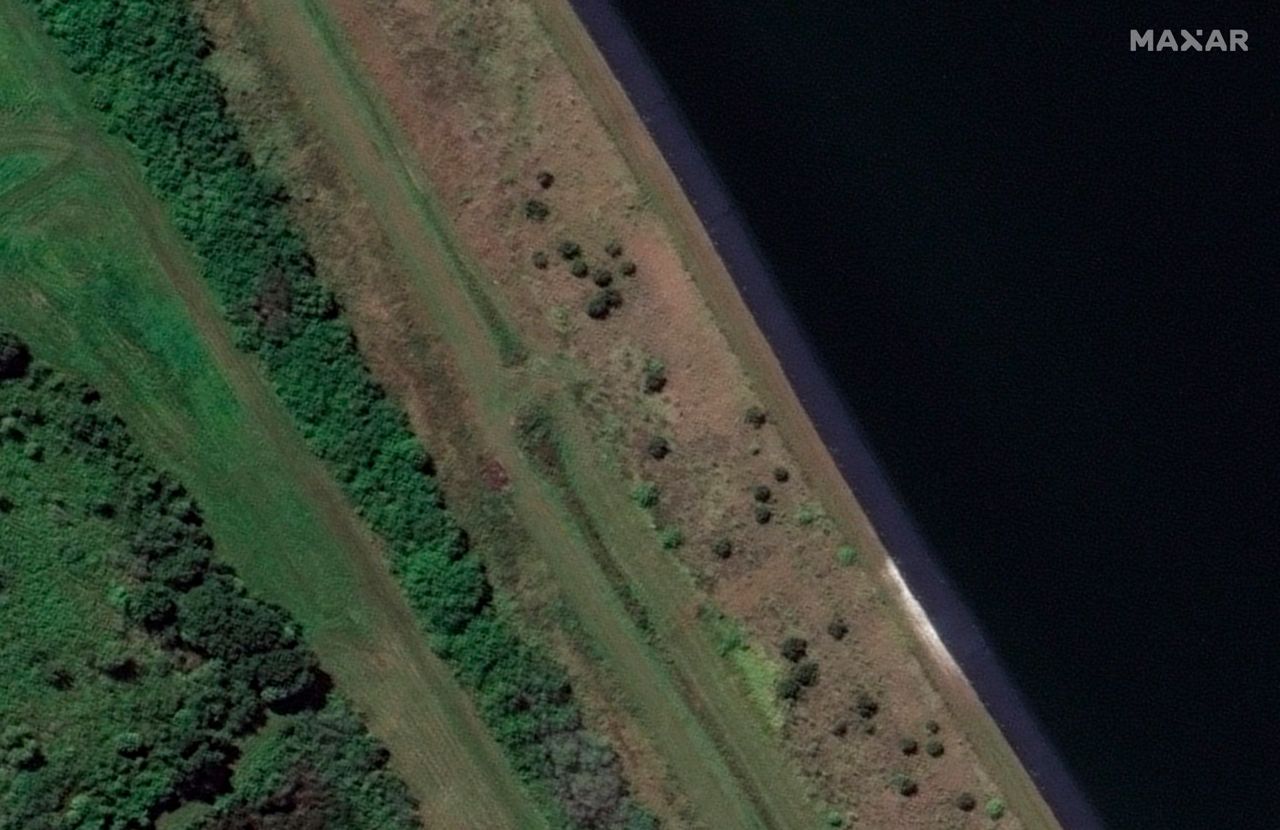 2 of 3
This Oct. 30, 2020, image provided by Maxar Technologies shows a view of a retaining pond at the 77-acre Piney Point reservoir in Manatee County, just south of the Tampa Bay area, in Florida, before a leak was discovered. (Satellite image ©2021 Maxar Technologies via AP)

3 of 3
Map locates the Piney Point facility pond that is leaking contaminated water.

ST. PETERSBURG, Fla. (AP) — A mandatory evacuation order near a leaking Florida wastewater reservoir that affected more than 300 homes and additional businesses was lifted Tuesday as officials said the situation was under control.

With the deployment of more than two dozen pumps and other equipment, fears have eased that the reservoir from an old phospate fertilizer plant would burst through its earthen walls and cause widespread flooding in Manatee County, just south of Tampa.

The reservoir initially held about 480 million gallons of contaminated water, but much has been drained away once the leak was discovered.

“The mandatory evacuation orders have been lifted,” said Scott Hopes, the county administrator. “We believe the risk has been mitigated and controlled.”

Earlier, officials announced that a major highway near the site, U.S. 41, would be reopened.

The decisions on Tuesday come as Florida lawmakers are proposing to spend up to $200 million to clean up and close the wastewater reservoir. But it was not immediately clear how officials plan to tackle what would be a huge engineering challenge.

The state Senate president, Republican Wilton Simpson, said a legislative committee on Wednesday will take up an amendment to use federal money for the project. Its sponsor is Sen. Jim Boyd, a Republican from Bradenton where the Piney Point reservoir is located.

“This has been a catastrophe waiting to happen for too long,” Simpson said in a statement. “We don't want to be talking about this problem again in five, 10 or 20 years.”

A House committee is also expected to consider a similar bill Wednesday.

Under the proposals, the money would come from the $1.9 trillion coronavirus stimulus package signed into law in March by President Joe Biden.

“This is a huge step forward for our community,” Boyd said.

Nikki Fried, the state commissioner of the Agriculture and Consumer Services Department, toured the site Tuesday and told reporters the situation appears to have stabilized.

The reservoir, and two others nearby, sit in stacks of phosphogypsum, a solid radioactive byproduct from manufacturing fertilizer from an old phosphate plant that is no longer in operation.

The Florida Department of Environmental Protection says the water in the pond is primarily saltwater mixed with wastewater and stormwater. It has elevated levels of phosphorous and nitrogen and is acidic, but does not appear to be toxic. It is not radioactive.

The agency said dozens of pumps and 10 vacuum trucks have been deployed to remove more than 35 million gallons (132 million liters) of wastewater per day into the Tampa Bay estuary, where 11 different sampling operations are monitoring water quality and considering ways of minimizing algae blooms that kill marine life and make beachgoing hazardous to humans in the tourism-dependent state.

Noah Valenstein, secretary of the state environmental agency, said Tuesday that every precaution is being taken to ensure the water heading into Tampa Bay does not cause an environmental disaster.

“We've set ourselves up to have the least environmental impact,” Valenstein said.

Under the Florida Senate bill, once the money is approved, the Department of Environmental Protection would use competitive bidding to select a company to handle the shutdown of the site. The precise contours of that plan are not yet clear.

Glenn Compton, director of the ManaSota-88 environmental group, said nothing like this has ever been done in Florida before.

“Nobody can say exactly how it would be done. That remains to be seen,” Compton said. “How they cap this would be an engineering feat that has never before been done.”

Some ideas on the table include deep-well injection to send the water thousands of feet underground, but that comes with its own concerns about contamination.

As for the reservoir, Compton said there have been discussions of using fly ash, a byproduct of coal-burning power plants, which would eventually harden and prevent the reservoir from filling with water again.

There are about two dozen other sites in Florida containing about 1 billion tons of this phosphate production byproduct, officials have said.