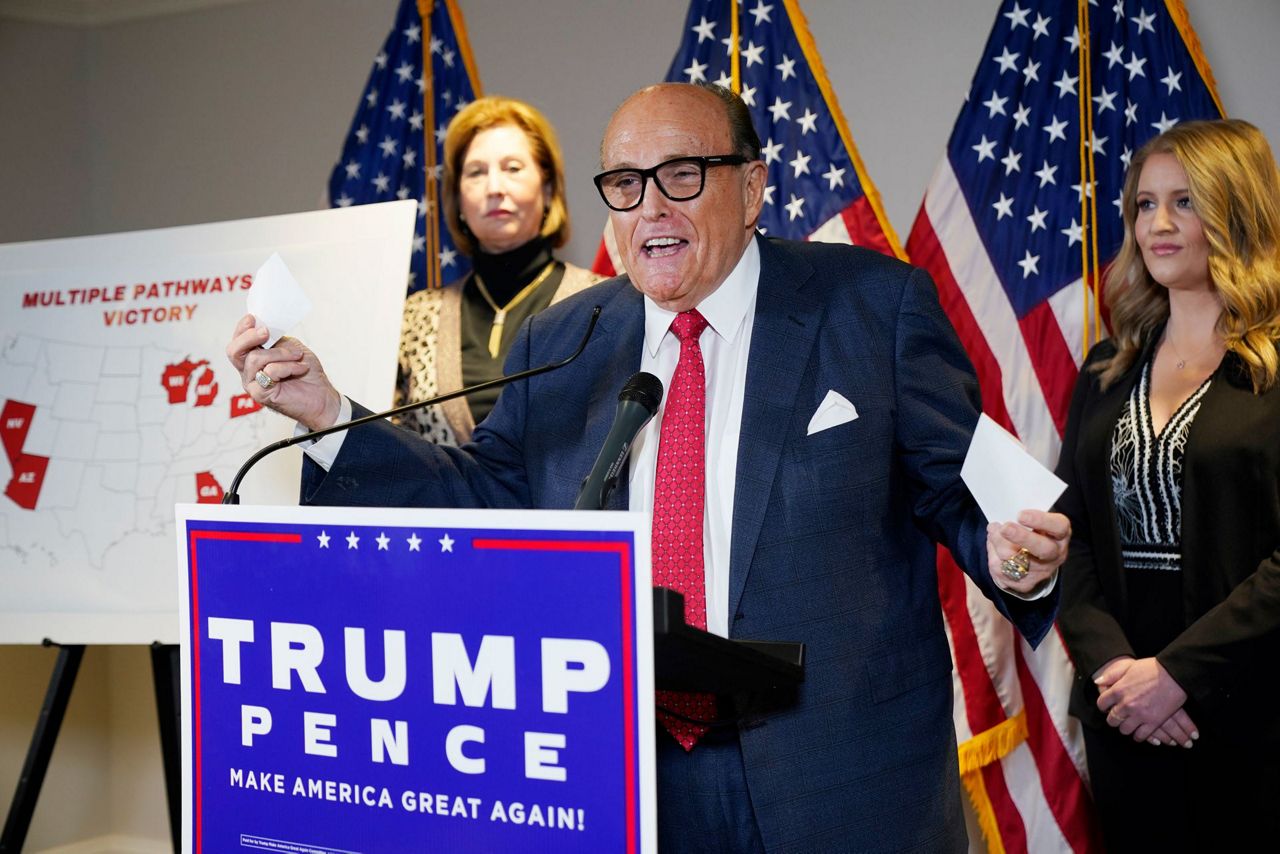 1 of 9
FILE - In this Nov. 19, 2020, file photo, former Mayor of New York Rudy Giuliani, a lawyer for President Donald Trump, speaks during a news conference at the Republican National Committee headquarters in Washington. A law enforcement official tells the Associated Press that federal investigators have executed a search warrant at Rudy Giuliani's Manhattan residence. The former New York City mayor has been under investigation for several years over his business dealings in Ukraine.(AP Photo/Jacquelyn Martin, File) 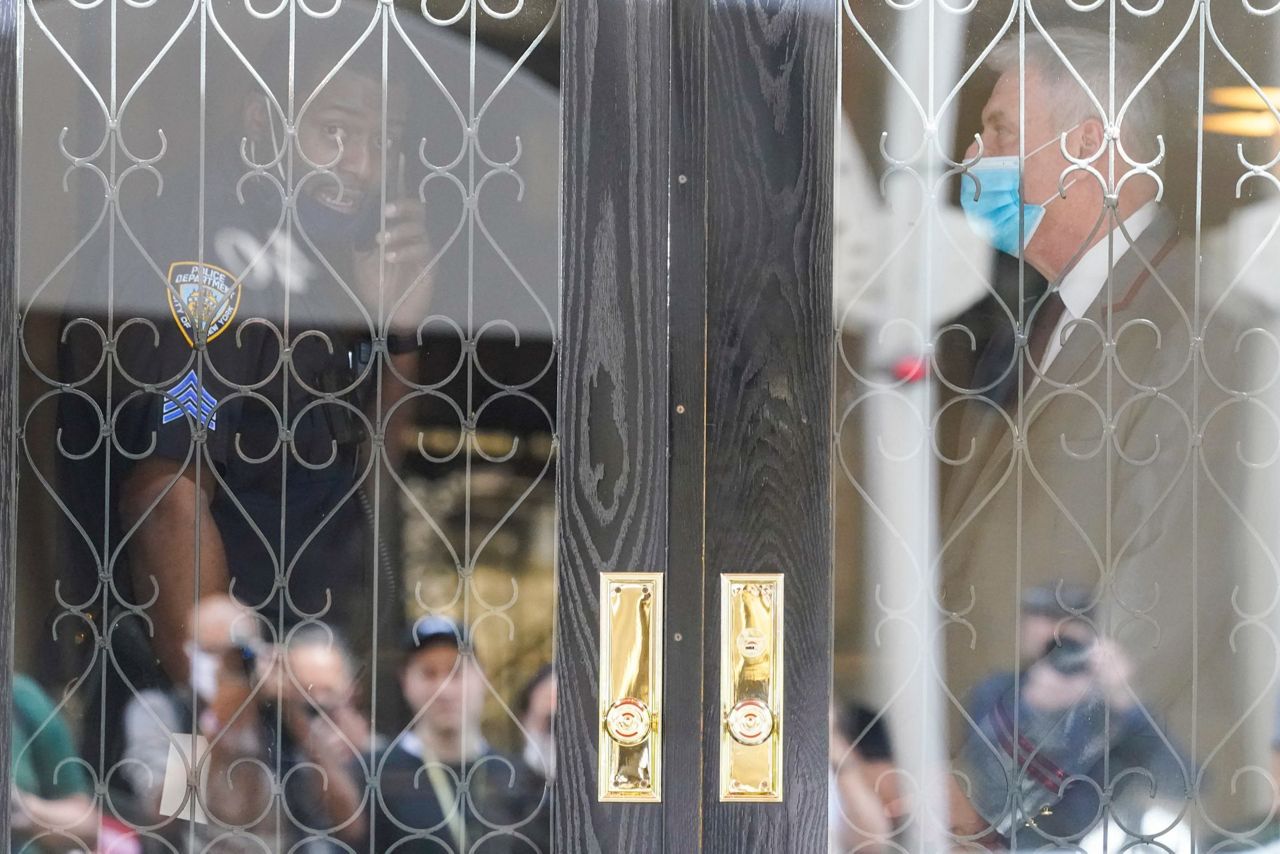 2 of 9
A New York City Police officer talk to the doorman of the building where Rudy Giuliani lives, Wednesday, April 28, 2021, in New York. A law enforcement official tells the Associated Press that federal investigators have executed search warrants at Giuliani’s Manhattan residence and office. The former New York City mayor has been under investigation for several years over his business dealings in Ukraine.(AP Photo/Mary Altaffer) 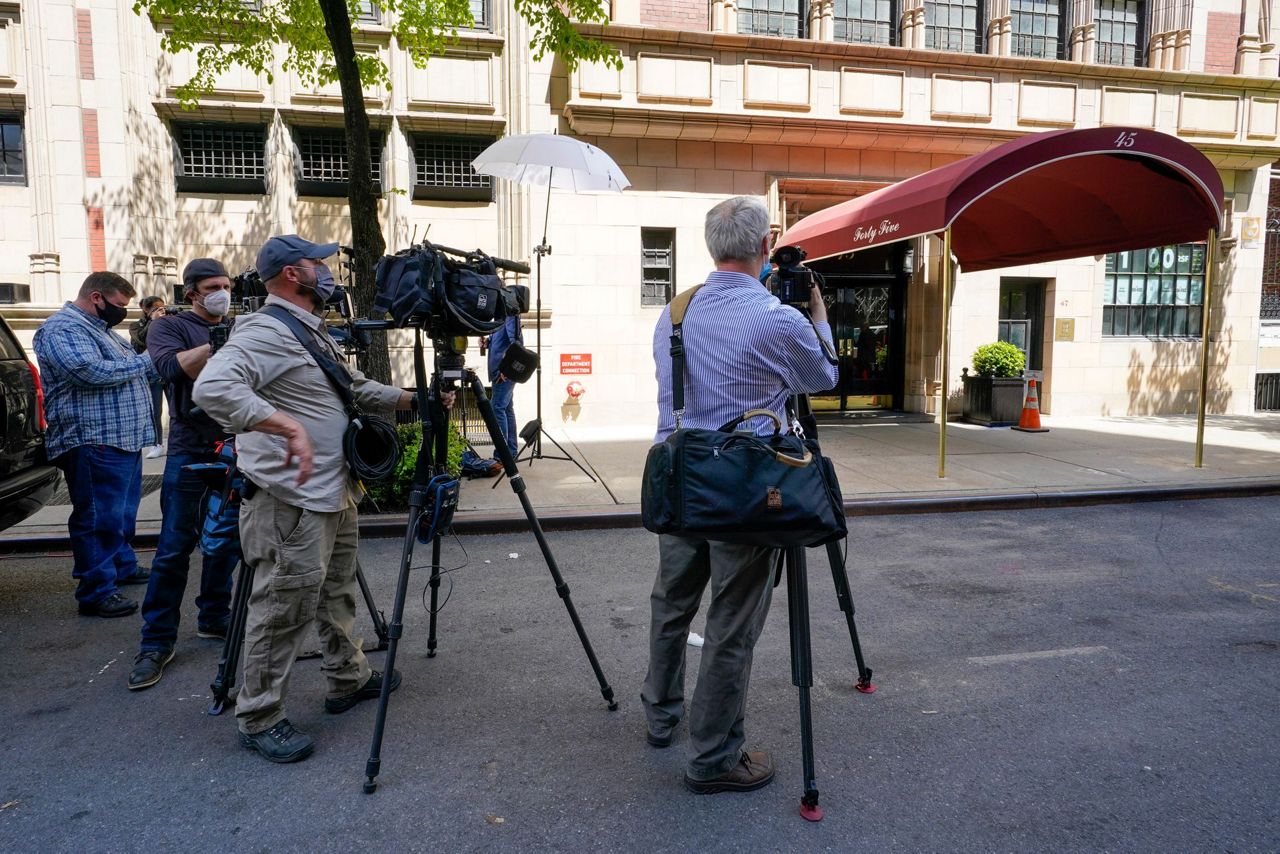 3 of 9
Reporters assemble outside the building where Rudy Giuliani lives, Wednesday, April 28, 2021, in New York. A law enforcement official tells the Associated Press that federal investigators have executed search warrants at Giuliani’s Manhattan residence and office. The former New York City mayor has been under investigation for several years over his business dealings in Ukraine. (AP Photo/Mary Altaffer) 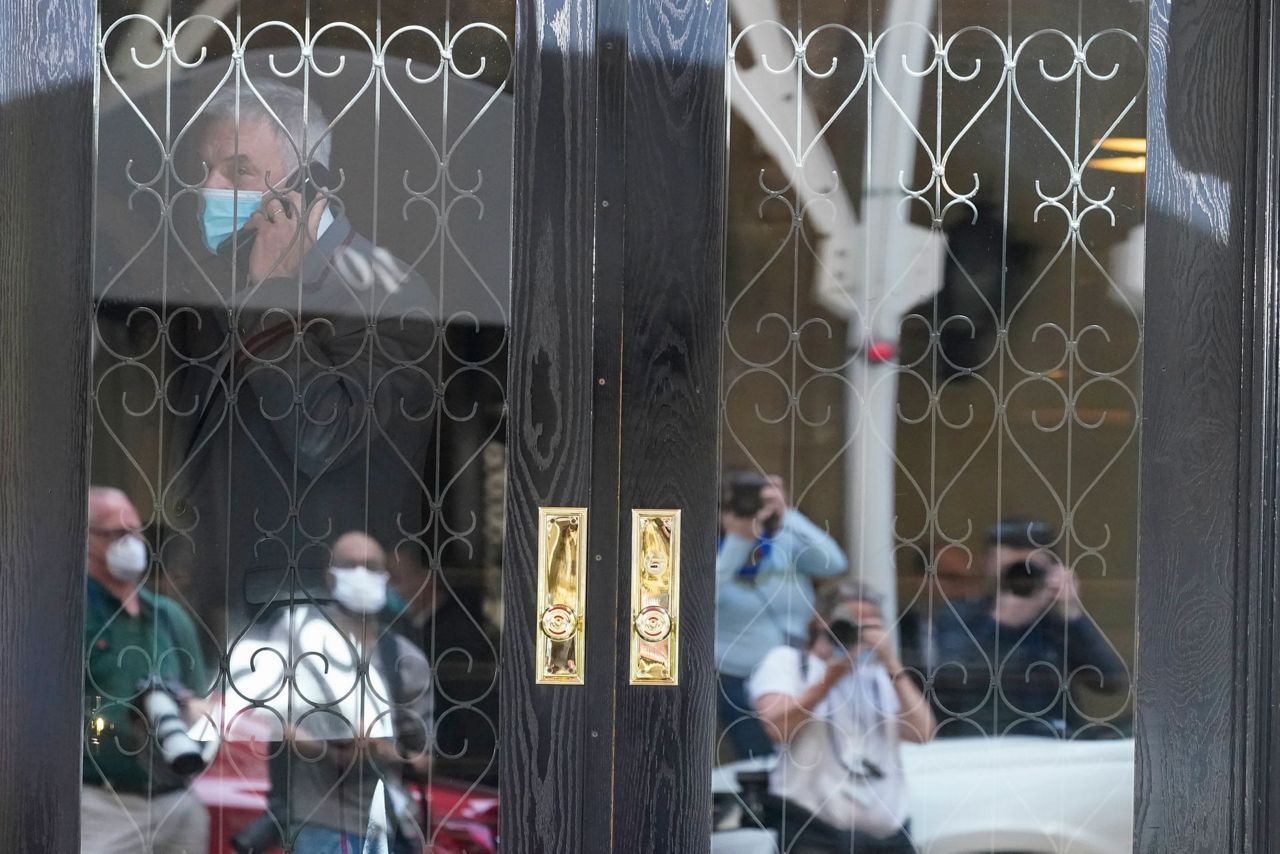 4 of 9
The doorman of the building where Rudy Giuliani lives looks at reporters assembled outside, Wednesday, April 28, 2021, in New York. A law enforcement official tells the Associated Press that federal investigators have executed search warrants at Giuliani’s Manhattan residence and office. The former New York City mayor has been under investigation for several years over his business dealings in Ukraine.(AP Photo/Mary Altaffer) 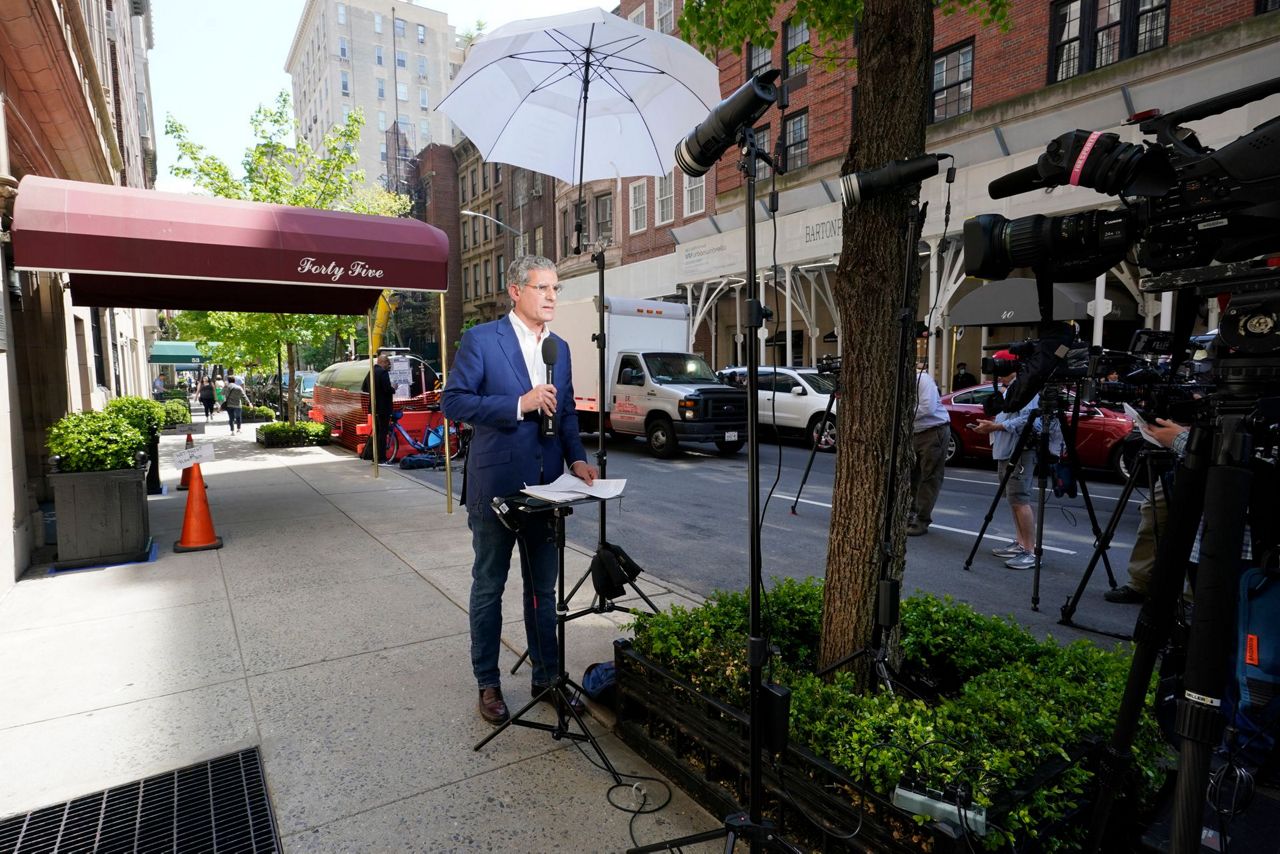 5 of 9
A reporter does a live stand up outside the building where Rudy Giuliani lives, Wednesday, April 28, 2021, in New York. A law enforcement official tells the Associated Press that federal investigators have executed search warrants at Giuliani’s Manhattan residence and office. The former New York City mayor has been under investigation for several years over his business dealings in Ukraine. (AP Photo/Mary Altaffer) 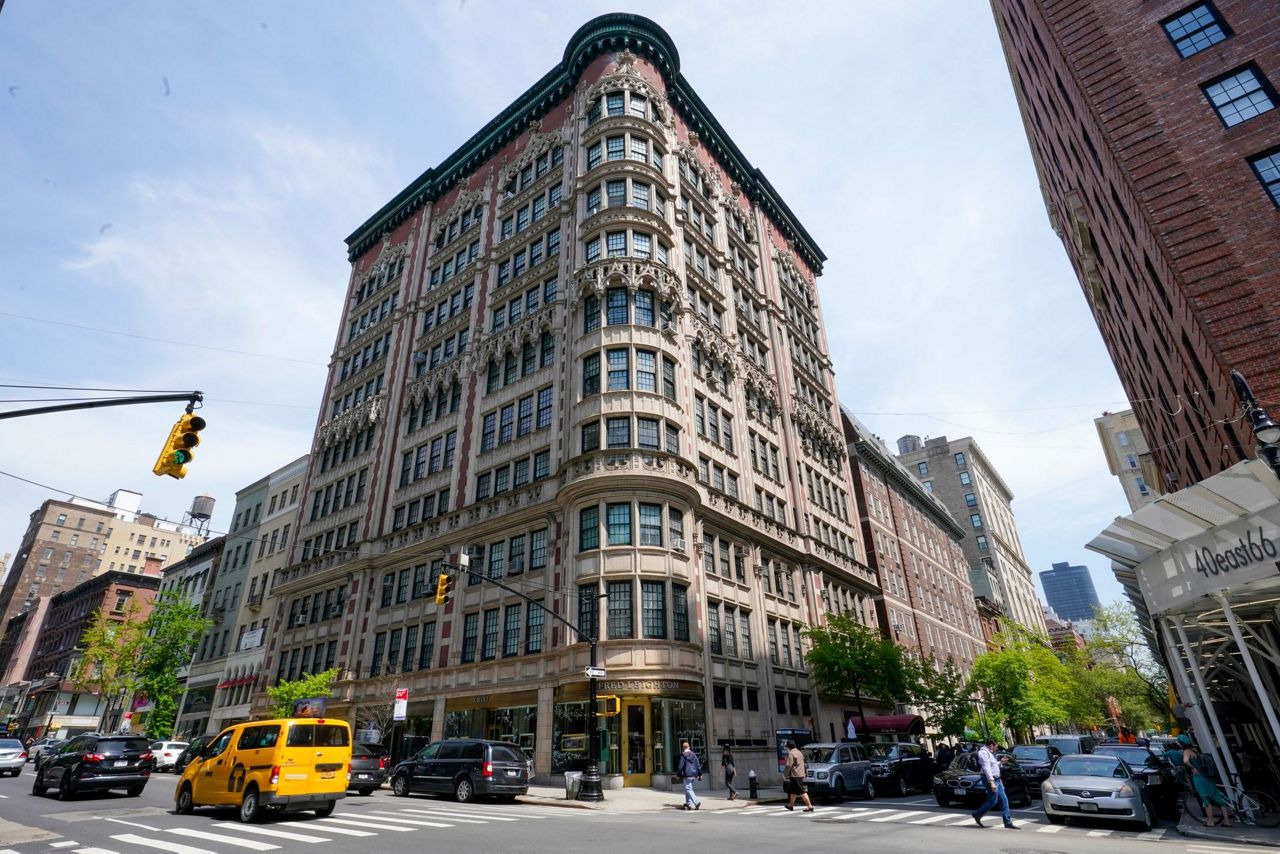 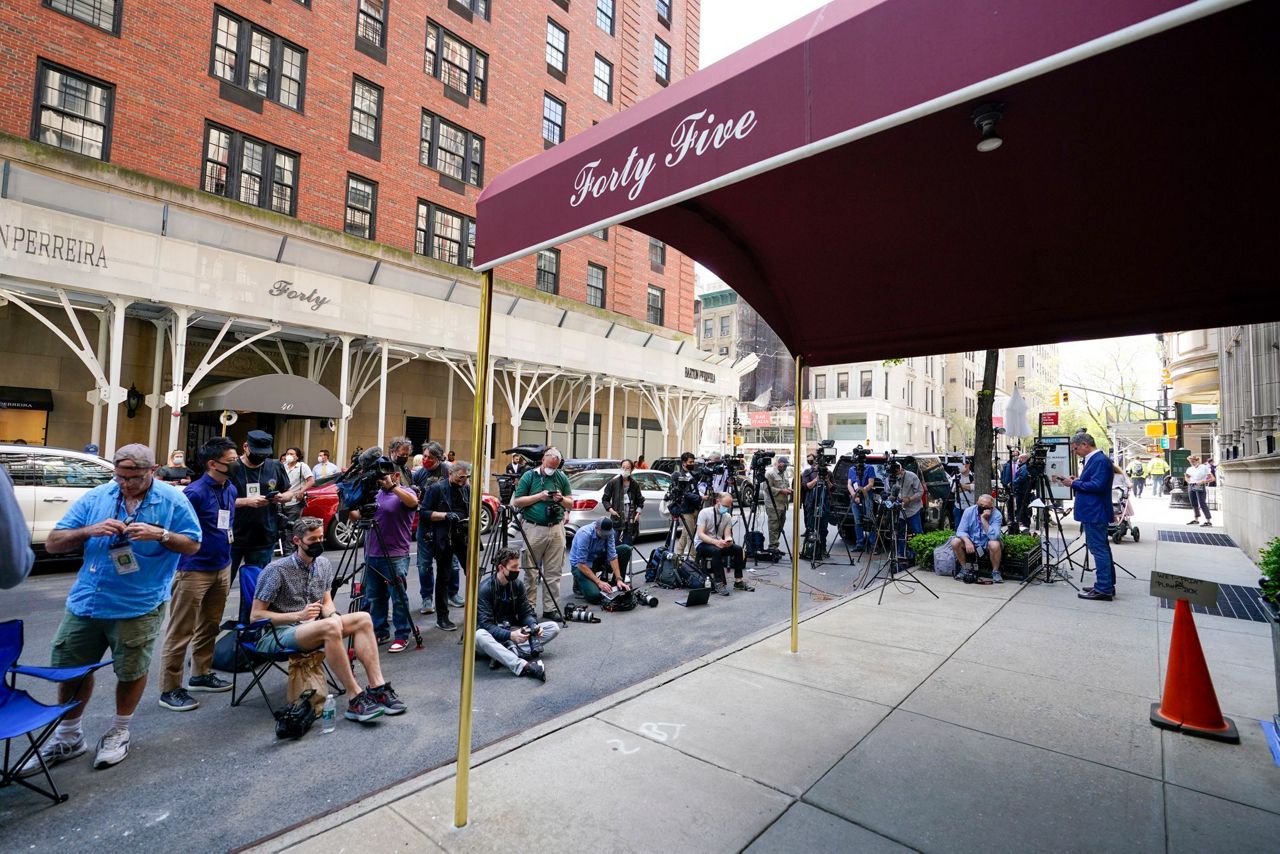 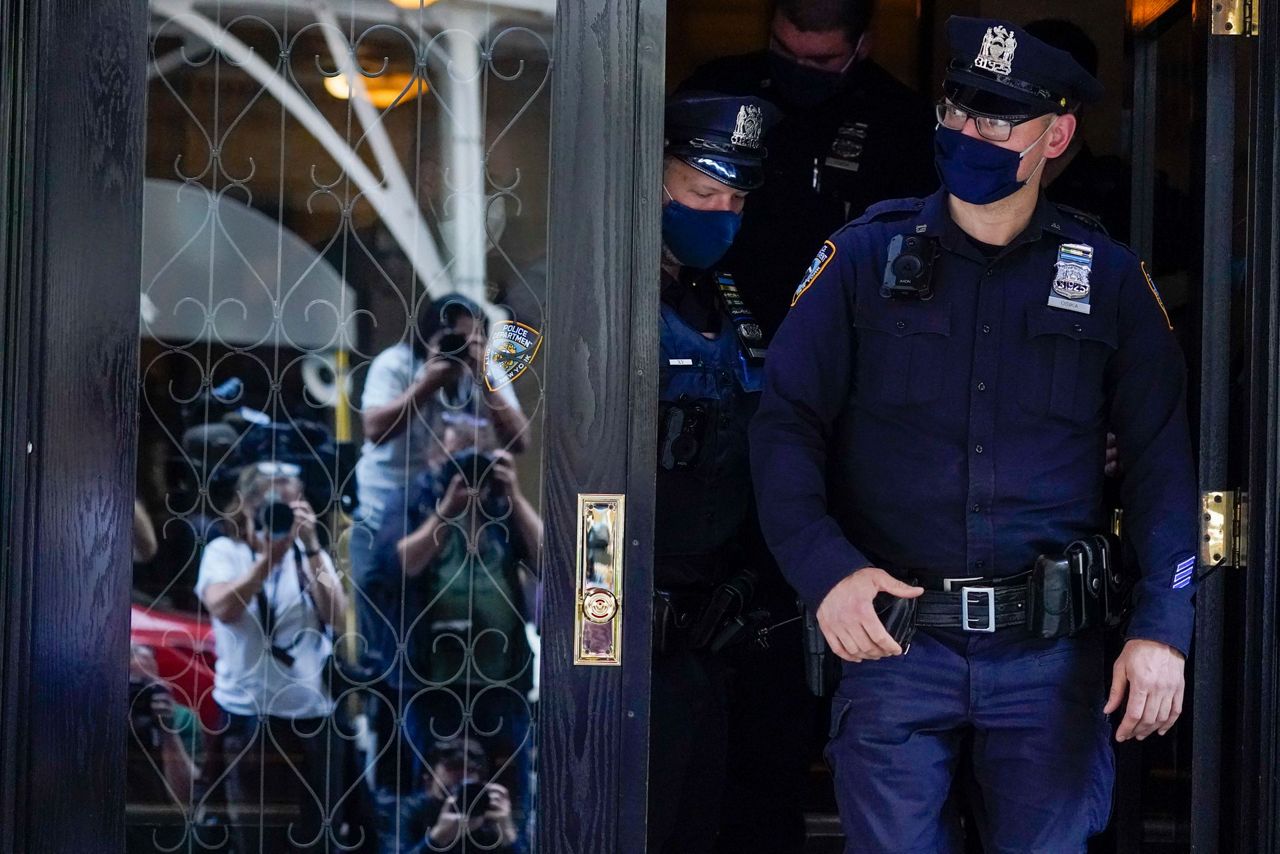 8 of 9
Members of the media are reflected in the widow a door as New York City Police officers walk out of the apartment building where former New York Mayor Rudy Giuliani resides, Wednesday, April 28, 2021, in New York. Federal agents on Wednesday raided Giuliani’s Manhattan home and office, seizing computers and cell phones in a major escalation of the Justice Department’s investigation into the business dealings of former President Donald Trump’s personal lawyer. (AP Photo/Mary Altaffer) 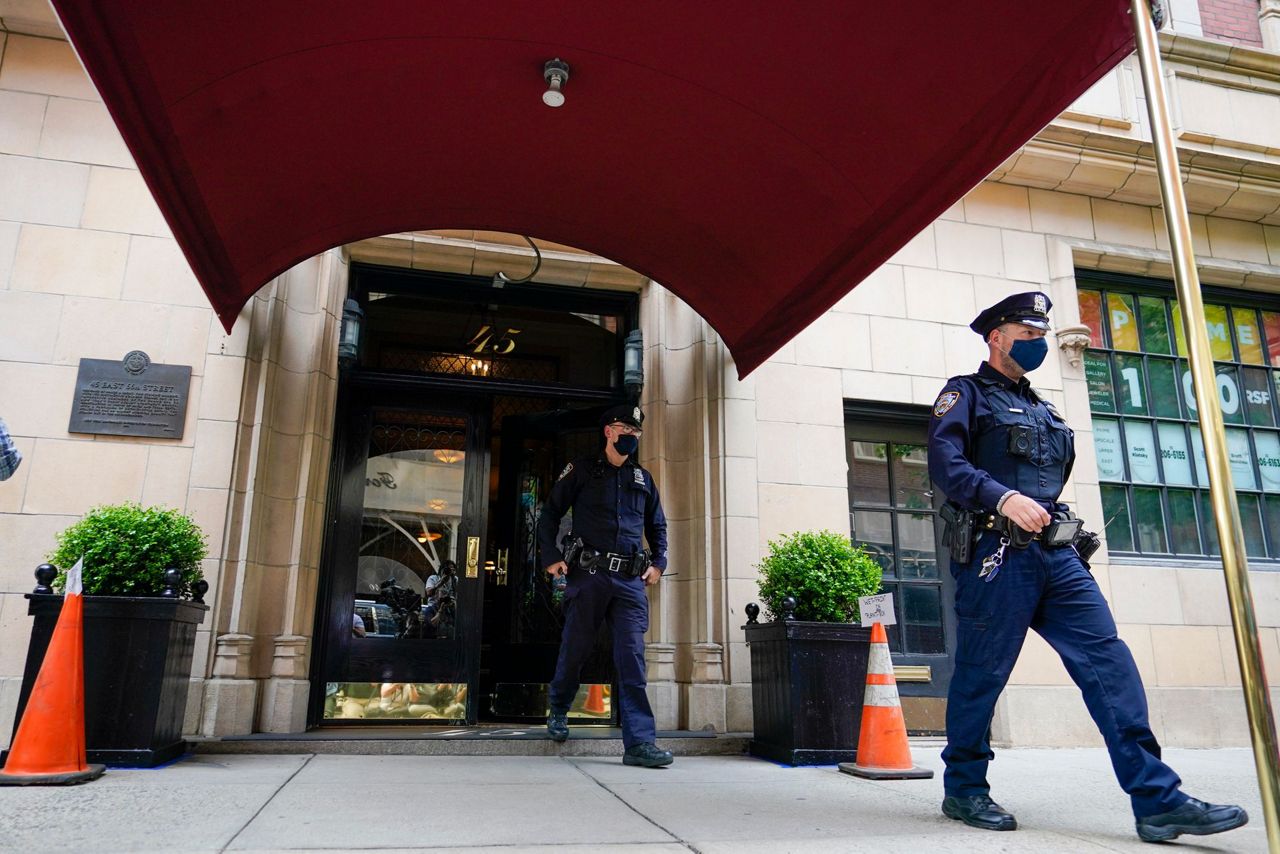 Giuliani, the former New York City mayor once celebrated for his leadership in the aftermath of the 9/11 attacks, has been under federal scrutiny for several years over his ties to Ukraine. The dual searches sent the strongest signal yet that he could eventually face federal charges.

Agents searched Giuliani’s home on Madison Avenue and his office on Park Avenue , people familiar with the investigation told The Associated Press. The warrants, requiring approval from the top levels of the Justice Department, signify prosecutors believe they have probable cause that Giuliani committed a federal crime — though they don't guarantee charges will materialize.

The full scope of the investigation is unclear, but it at least partly involves Giuliani's dealings in Ukraine, law enforcement officials have told the AP.

The people discussing the searches and Wednesday's developments could not do so publicly and spoke to the AP on condition of anonymity. News of the search was first reported by The New York Times.

In a statement released through his lawyer, Giuliani accused federal authorities of a “corrupt double standard,” invoking allegations he's pushed against prominent Democrats, and said that the Justice Department was “running rough shod over the constitutional rights of anyone involved in, or legally defending, former President Donald J. Trump."

A Justice Department spokesperson did not immediately respond to a request for comment. The U.S. Attorney’s office in Manhattan and the FBI’s New York office declined to comment Wednesday.

The federal probe into Giuliani's Ukraine dealings stalled last year because of a dispute over investigative tactics as Trump unsuccessfully sought a second term. Giuliani subsequently took on a leading role in disputing the election results on the Republican's behalf.

Wednesday's raids came months after Trump left office and lost his ability to pardon allies for federal crimes. The former president himself no longer enjoys the legal protections the Oval Office once provided him — though there is no indication Trump is eyed in this probe.

Many people in Trump’s orbit have previously been ensnared in federal investigations, namely special counsel Robert Mueller's probe of Russian election interference. But most of those criminal cases either fizzled or fell apart. Giuliani’s is different.

Giuliani was central to the then-president’s efforts to dig up dirt against Democratic rival Joe Biden and to press Ukraine for an investigation into Biden and his son, Hunter — who himself now faces a criminal tax probe by the Justice Department.

Giuliani also sought to undermine former U.S. ambassador to Ukraine Marie Yovanovitch, who was pushed out on Trump’s orders, and met several times with a Ukrainian lawmaker who released edited recordings of Biden in an effort to smear him before the election.

Giuliani’s lawyer, Robert Costello, told The Wall Street Journal that the searches pertained to potential violations of foreign lobbying rules and that the warrants sought Giuliani's communications with people including John Solomon, a former columnist and frequent Fox News commentator with close ties to Giuliani, who pushed several baseless or unsubstantiated allegations involving Ukraine and Biden during the 2020 election.

Phone records published by House Democrats in 2019 in the wake of Trump’s first impeachment trial showed frequent contacts involving Giuliani, Solomon and Lev Parnas, a Giuliani associate who is under indictment on charges of using foreign money to make illegal campaign contributions.

Contacted Wednesday, Solomon said it was news to him that the Justice Department was interested in any communications he had with Giuliani, though he said it was not entirely surprising given the issues raised in the impeachment trial.

“He was someone that tried to pass information to me. I didn’t use most of it,” Solomon said of Giuliani. “If they want to look at that, there’s not going to be anything surprising in it.”

Everything was sitting “in plain view,” Solomon said. He said he believed his reporting had “stood the test of time” and maintained that he was “unaware of a single factual error” in any of his stories.

Solomon’s former employer, The Hill newspaper, published a review last year of some of his columns and determined they were lacking in context and missing key disclosures. Solomon previously worked for The Associated Press, departing the news organization in 2006.

The federal Foreign Agents Registration Act requires people who lobby on behalf of a foreign government or entity to register with the Justice Department. The once-obscure law, aimed at improving transparency, has received a burst of attention in recent years — particularly during Mueller's probe, which revealed an array of foreign influence operations in the U.S.

Federal prosecutors in the Manhattan office Giuliani himself once led — springing to prominence in the 1980s with high-profile prosecutions of Mafia figures — had pushed last year for a search warrant for records. Those included some of Giuliani’s communications, but officials in the Trump-era Justice Department would not sign off on the request, according to multiple people who insisted on anonymity to speak about the ongoing investigation with which they were familiar.

Officials in the then-deputy attorney general’s office raised concerns about both the scope of the request, which they thought would contain communications that could be covered by legal privilege between Giuliani and Trump, and the method of obtaining the records, three of the people said.

The issue was widely expected to be revisited by the Justice Department once Attorney General Merrick Garland assumed office, given the need for the department's upper echelons to sign off on warrants served on lawyers. Garland was confirmed last month and Deputy Attorney General Lisa Monaco was confirmed to her position and sworn in last week.