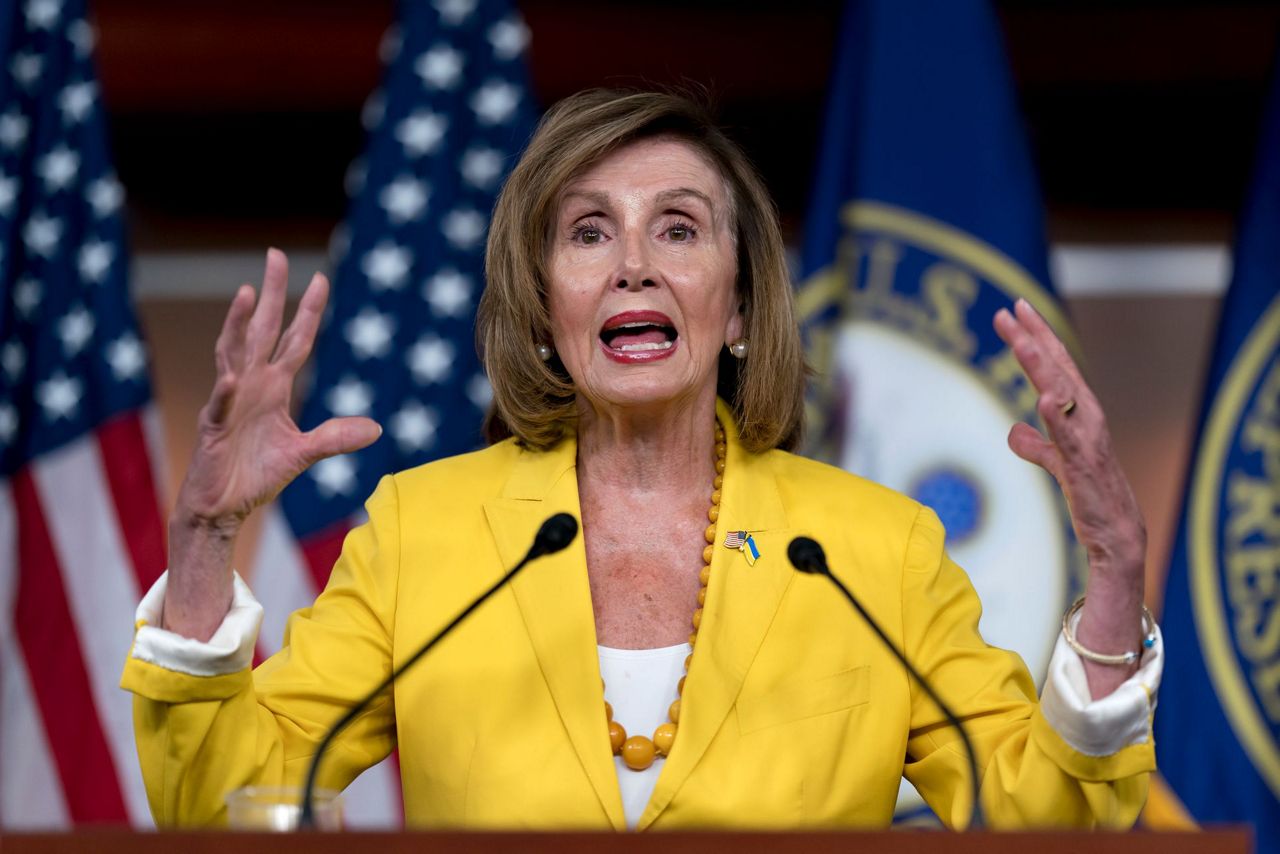 1 of 4
FILE - House Speaker Nancy Pelosi, D-Calif., speaks at the Capitol in Washington, July 21, 2022. U.S. officials say they have little fear that China would attack Pelosi’s plane if she flies to Taiwan. But the House Speaker would be entering one of the world’s hottest spots where a mishap, misstep or misunderstanding could endanger her safety. (AP Photo/J. Scott Applewhite, File) 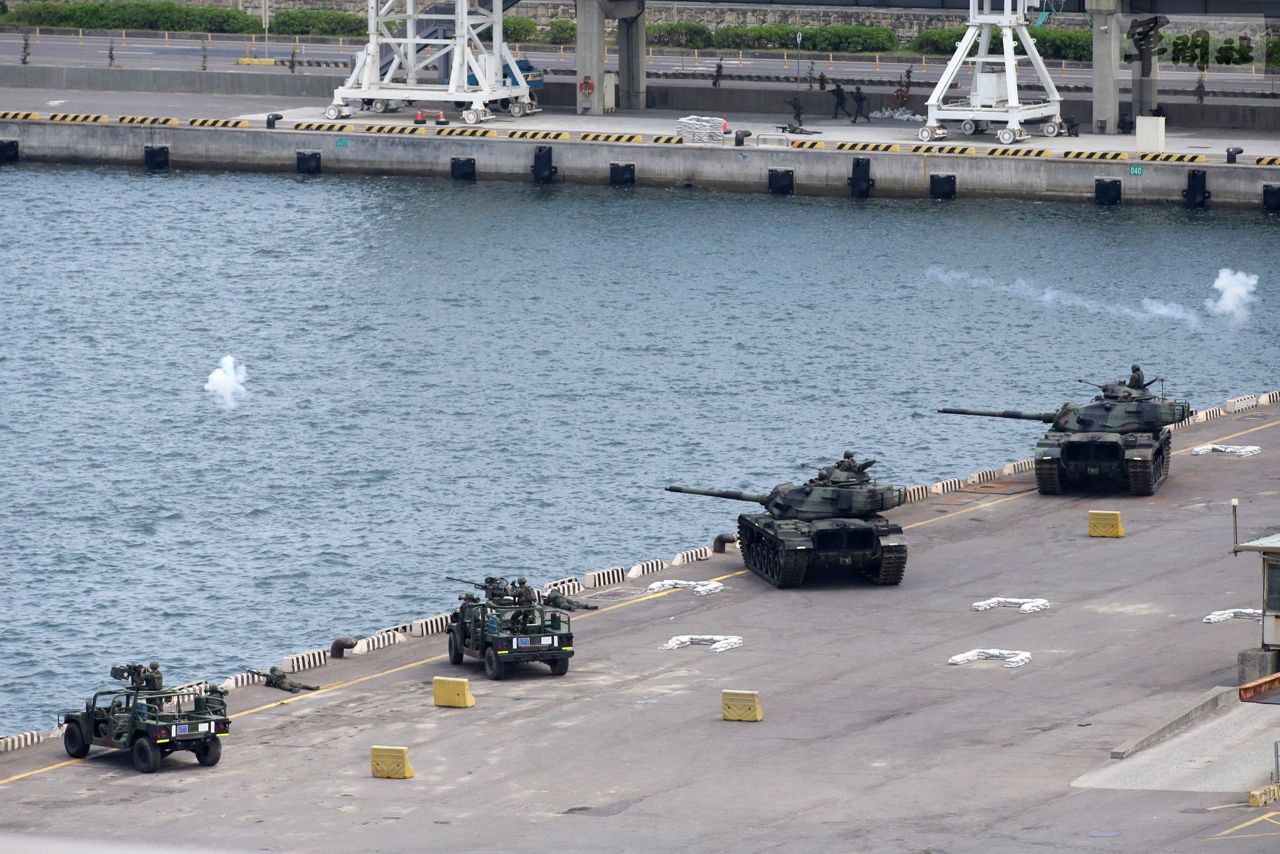 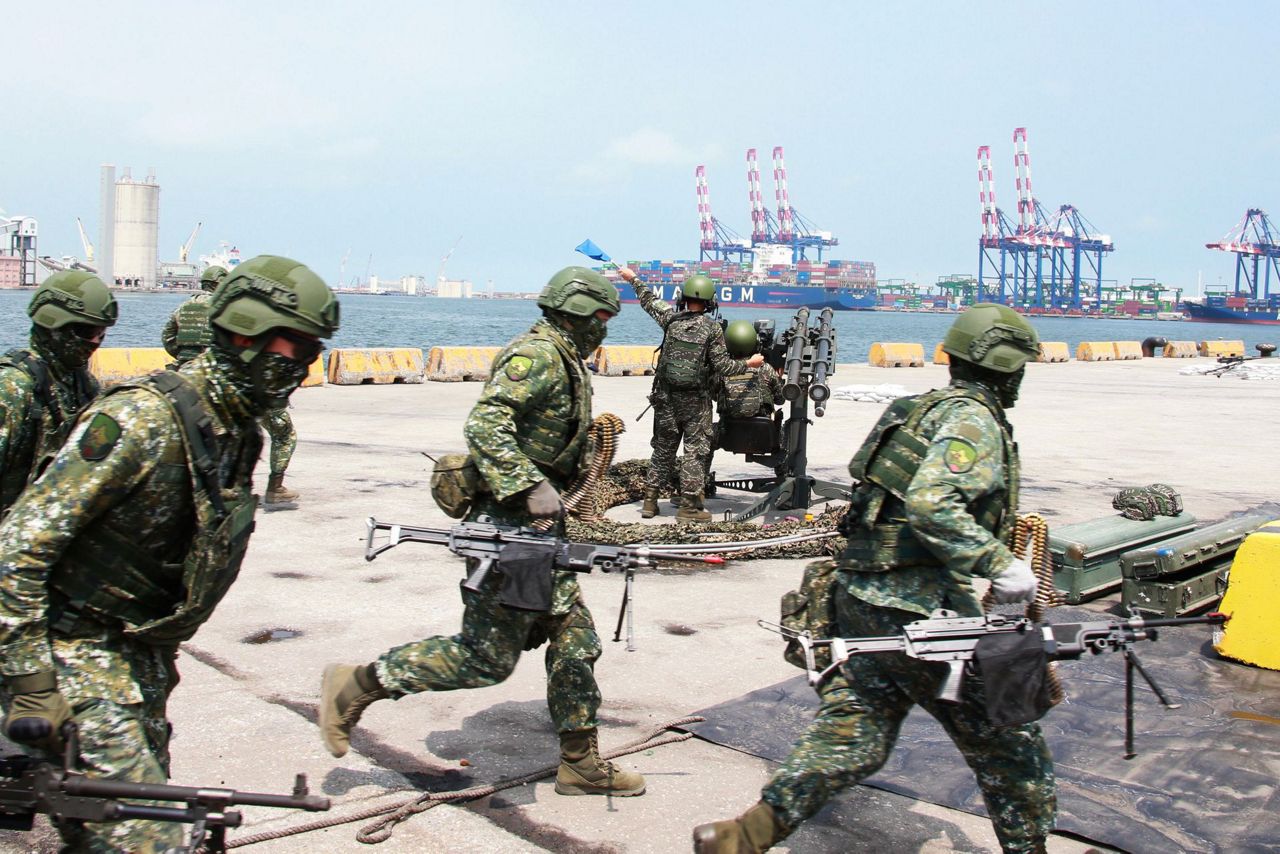 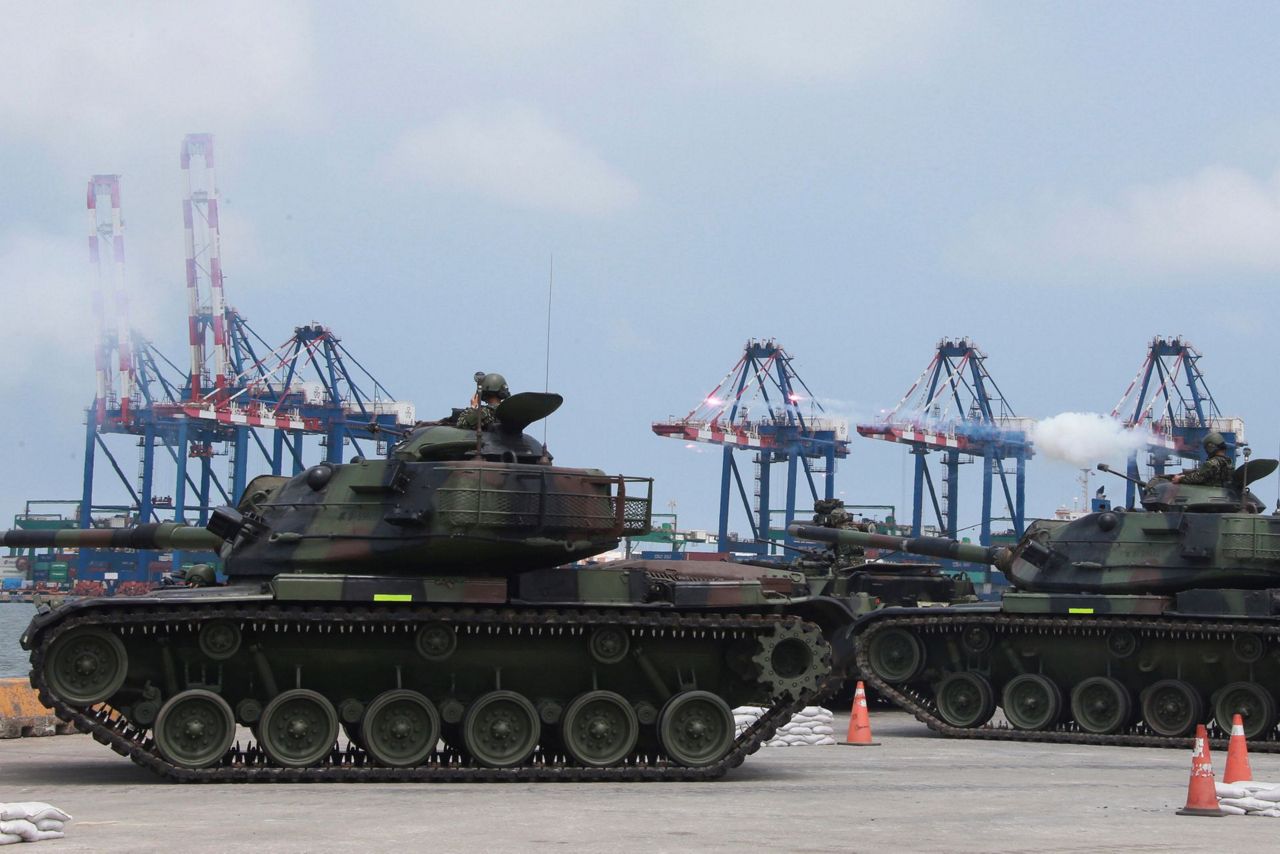 US military making plans in case Pelosi travels to Taiwan

SYDNEY (AP) — Nancy Pelosi hasn’t said if she’s going to Taiwan, but if she does she’d be entering one of the world’s hottest and most contentious spots. While U.S. officials say they have little fear that Beijing would attack the U.S. House speaker’s plane, they are aware that a mishap, misstep or misunderstanding could endanger her safety. So the Pentagon is developing plans for any contingency.

Officials told The Associated Press that if Pelosi goes to Taiwan — still an uncertainty — the military would increase its movement of forces and assets in the Indo-Pacific region. They declined to provide details, but said that fighter jets, ships, surveillance assets and other military systems would likely be used to provide overlapping rings of protection for her flight to Taiwan and any time on the ground there.

Any foreign travel by a senior U.S. leader requires additional security. But officials said this week that a visit to Taiwan by Pelosi — she would be the highest-ranking U.S. elected official to visit Taiwan since 1997 — would go beyond the usual safety precautions for trips to less risky destinations.

Asked about planned military steps to protect Pelosi, D-Calif., in the event of a visit, U.S. Gen. Mark Milley, chairman of the Joint Chiefs of Staff, said Wednesday that discussion of any specific travel is premature. But, he added, “if there’s a decision made that Speaker Pelosi or anyone else is going to travel and they asked for military support, we will do what is necessary to ensure a safe conduct of their visit. And I’ll just leave it at that.”

Pelosi would be the highest-ranking American lawmaker to visit the close U.S. ally since a predecessor as speaker, Newt Gingrich, R-Ga., traveled there 25 years ago.

China considers self-ruling Taiwan its own territory and has raised the prospect of annexing it by force. The U.S. maintains informal relations and defense ties with Taiwan even as it recognizes Beijing as the government of China.

The trip is being considered at a time when China has escalated what the U.S. and its allies in the Pacific describe as risky one-on-one confrontations with other militaries to assert its sweeping territorial claims. The incidents have included dangerously close fly-bys that force other pilots to swerve to avoid collisions, or harassment or obstruction of air and ship crews, including with blinding lasers or water cannon.

Dozens of such maneuvers have occurred this year alone, Ely Ratner, U.S. assistant defense secretary, said Tuesday at a South China Sea forum by the Center for Strategic and International Studies. China denies the incidents.

The U.S. officials, who spoke on the condition of anonymity to discuss sensitive security issues, described the need to create buffer zones around the speaker and her plane. The U.S. already has substantial forces spread across the region, so any increased security could largely be handled by assets already in place.

The military would also have to be prepared for any incident — even an accident either in the air or on the ground. They said the U.S. would need to have rescue capabilities nearby and suggested that could include helicopters on ships already in the area.

Pelosi has not publicly confirmed any new plans for a trip to Taiwan. She was going to go in April, but she postponed the trip after t esting positive for COVID-19.

The White House on Monday declined to weigh in directly on the matter, noting she had not confirmed the trip. But President Joe Biden last week raised concerns about it, telling reporters that the military thinks her trip is “not a good idea right now.”

A Pelosi trip may well loom over a call planned for Thursday between Biden and Chinese President Xi Jinping, their first conversation in four months. A U.S. official confirmed plans for the call to The Associated Press on the condition of anonymity ahead of the formal announcement.

U.S. officials have said the administration doubts that China would take direct action against Pelosi herself or try to sabotage the visit. But they don’t rule out the possibility that China could escalate provocative overflights of military aircraft in or near Taiwanese airspace and naval patrols in the Taiwan Strait should the trip take place. And they don’t preclude Chinese actions elsewhere in the region as a show of strength.

Security analysts were divided Tuesday about the extent of any threat during a trip and the need for any additional military protection.

The biggest risk during Pelosi’s trip is of some Chinese show of force “gone awry, or some type of accident that comes out of a demonstration of provocative action,” said Mark Cozad, acting associate director of the International Security and Defense Policy Center at the Rand Corp. “So it could be an air collision. It could be some sort of missile test, and, again, when you’re doing those types of things, you know, there is always the possibility that something could go wrong.”

Barry Pavel, director of the Scowcroft Center for Strategy and Security at the Atlantic Council, scoffed at U.S. officials’ reported consideration of aircraft carriers and warplanes to secure the speaker’s safety. “Obviously, the White House does not want the speaker to go and I think that’s why you’re getting some of these suggestions.”

“She’s not going to go with an armada,” Pavel said.

On Wednesday, China’s Foreign Ministry declined to comment on the presidential phone call. However, spokesperson Zhao Lijian reiterated China’s warnings over a Pelosi visit. “If the U.S. insists on going its own way and challenging China’s bottom line, it will surely be met with forceful responses,” Zhao told reporters at a daily briefing. “All ensuing consequences shall be borne by the U.S.”

Milley said this week that the number of intercepts by Chinese aircraft and ships in the Pacific region with U.S. and other partner forces has increased significantly over the past five years. He said Beijing’s military has become far more aggressive and dangerous, and that the number of unsafe interactions has risen by similar proportions.

Those include reports of Chinese fighter jets flying so close to a Canadian air security patrol last month that the Canadian pilot had to swerve to avoid collision, and another close call with an Australian surveillance flight in late May in which the Chinese crew released a flurry of metal scraps that were sucked into the other plane’s engine.

U.S. officials say that the prospects of an intercept or show of force by Chinese aircraft near Pelosi’s flight raises concerns, prompting the need for American aircraft and other assets to be nearby.

The U.S. aircraft carrier USS Ronald Reagan and its strike group is currently operating in the western Pacific, and made a port call in Singapore over the weekend. The strike group involves at least two other Navy ships and Carrier Air Wing 5, which includes F/A-18 fighter jets, helicopters and surveillance aircraft.

Prior to pulling into port in Singapore, the strike group was operating in the South China Sea. In addition, another Navy ship, the USS Benfold, a destroyer, has been conducting freedom of navigation operations in the region, including a passage through the Taiwan Strait last week.