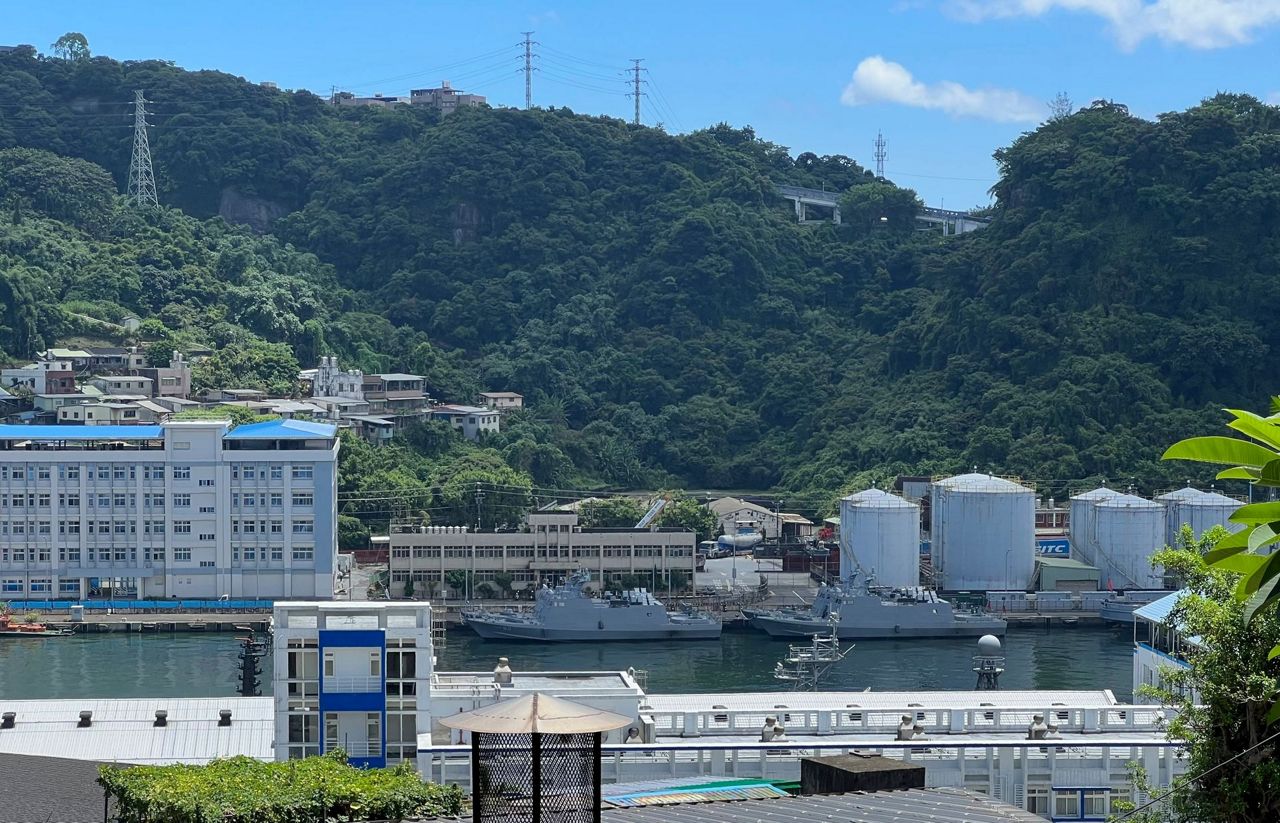 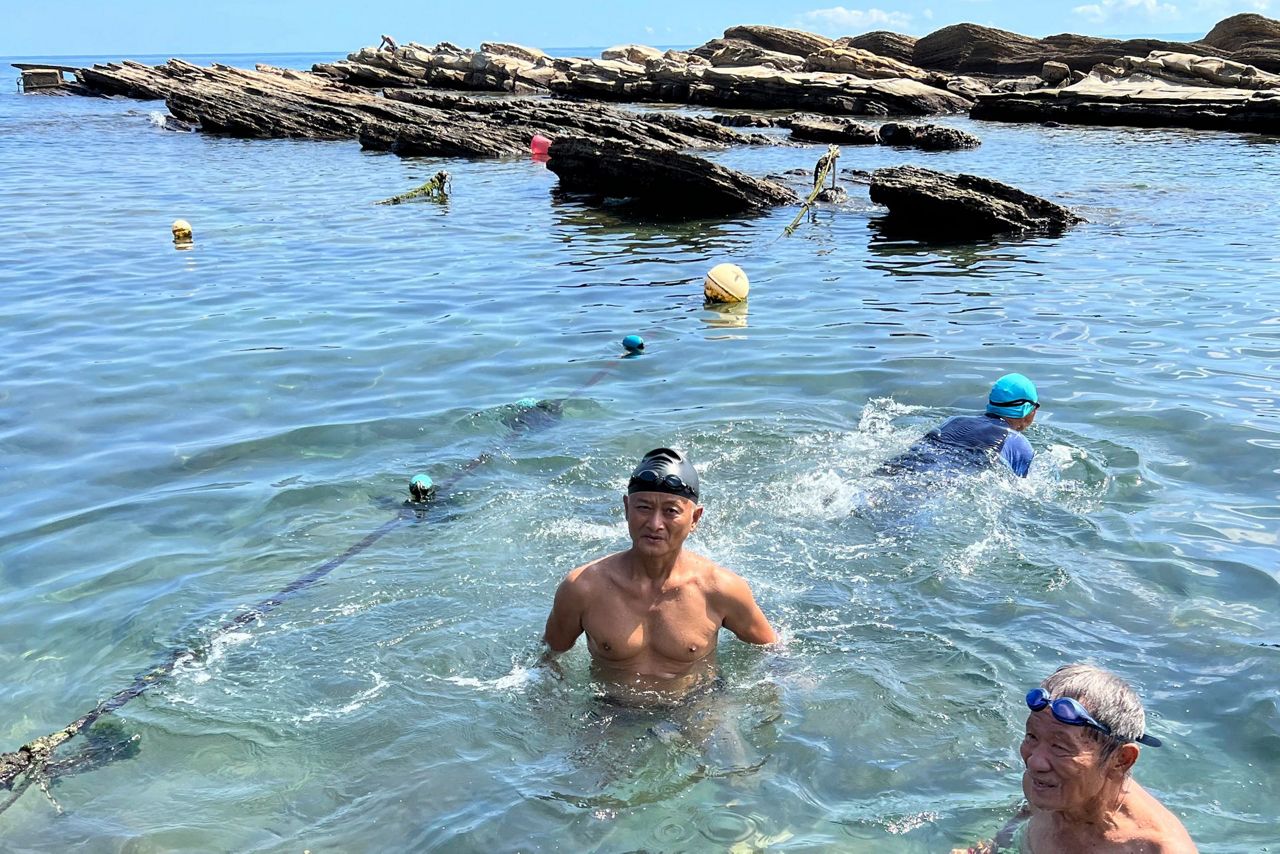 2 of 7
Lu Chuan-hsiong, center, swims along the coast near Keelung in Taiwan, Thursday, Aug. 4, 2022. Lu, 63, who was enjoying his morning swim, says he wasn't worried about the recent China and Taiwan tensions. "Because Taiwanese and Chinese, we're all one family. There's a lot of mainlanders here, too," he said. (AP Photo/Johnson Lai) 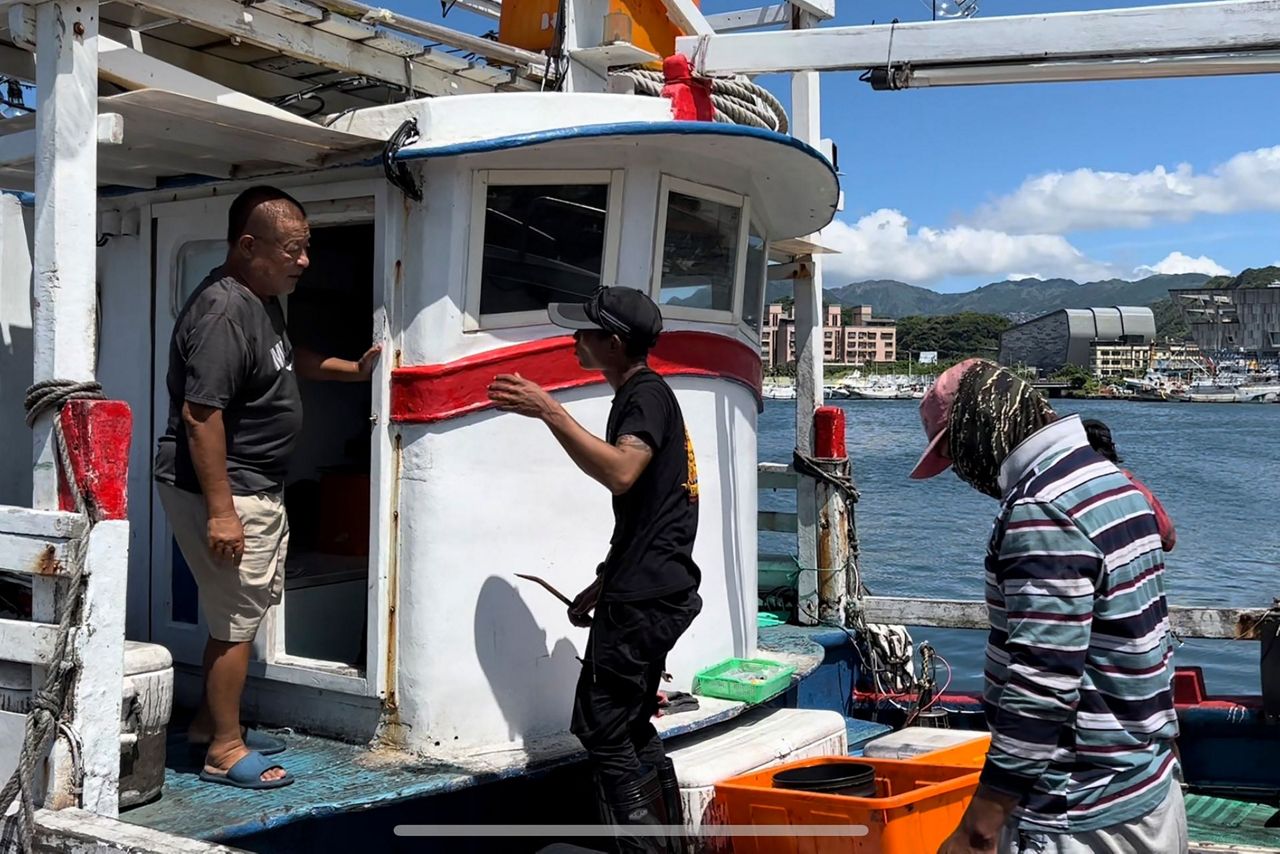 3 of 7
Fishing boat owner Chou Ting-tai, speaking to crew member while off-loading fishery products at Badouzi fishing port on Thursday in Keelung, Taiwan Thursday, Aug. 4, 2022. China says it conducted "precision missile strikes" in the Taiwan Strait on Thursday as part of military exercises that have raised tensions in the region to their highest level in decades. (AP Photo/Johnson Lai) 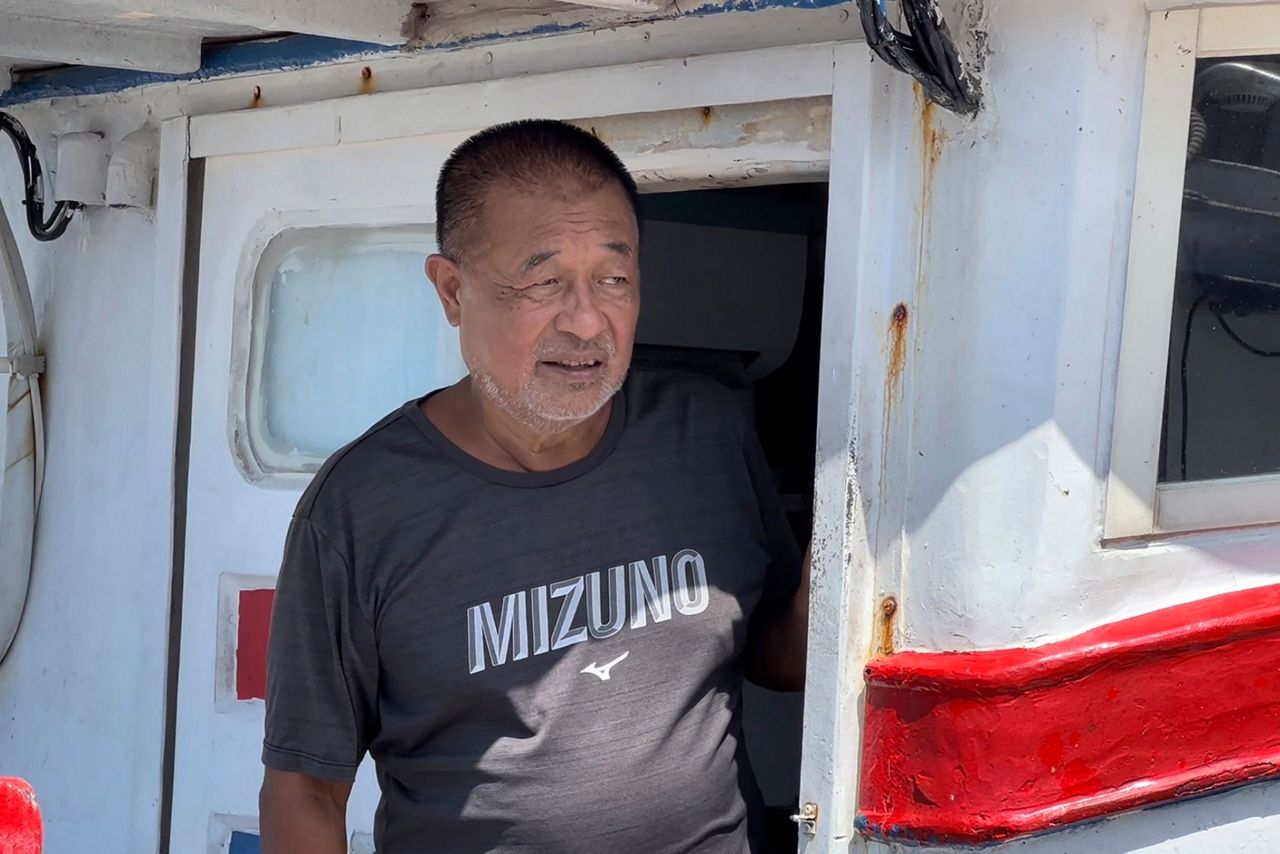 4 of 7
Fishing boat owner Chou Ting-tai, looks out from his boat at the Badouzi fishing port in Keelung, Taiwan Thursday, Aug. 4, 2022. China says it conducted "precision missile strikes" in the Taiwan Strait on Thursday as part of military exercises that have raised tensions in the region to their highest level in decades. (AP Photo/Johnson Lai) 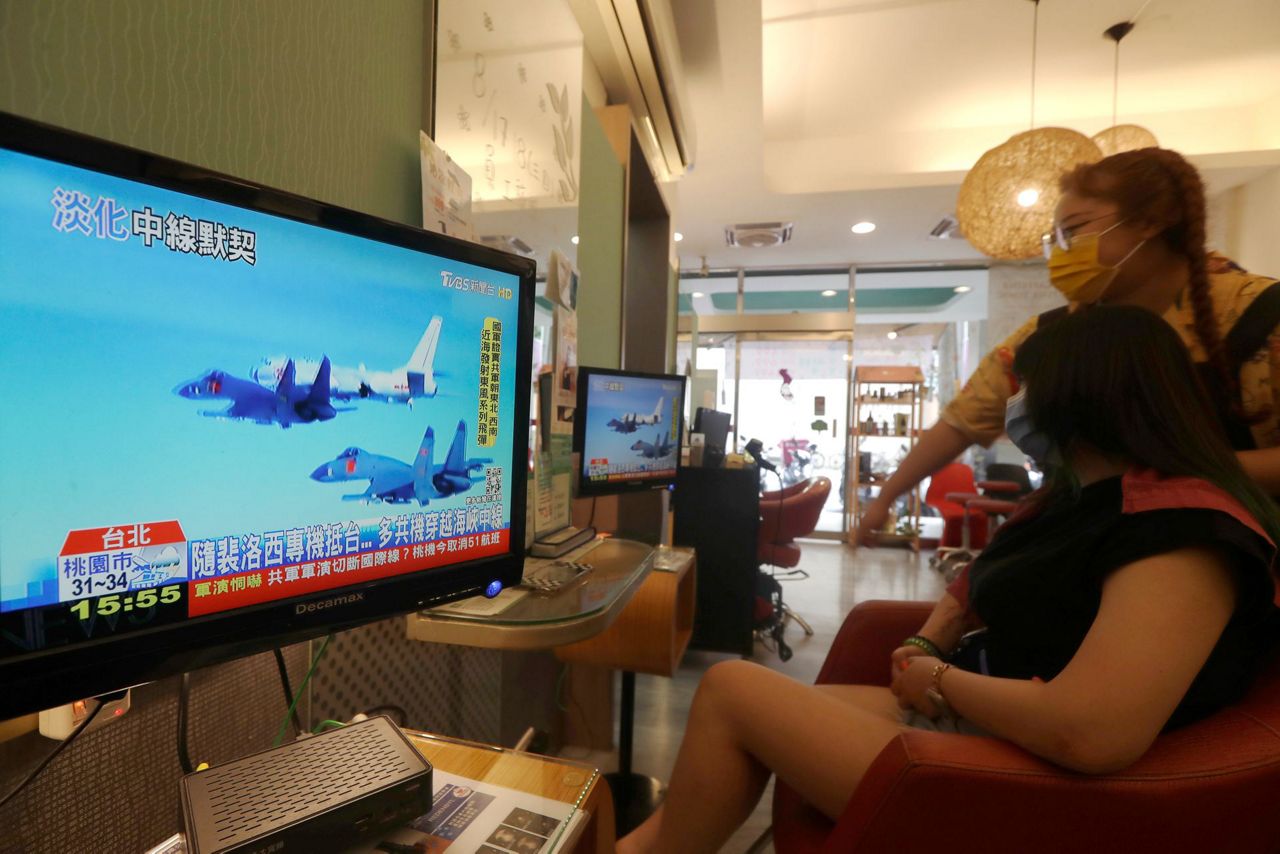 5 of 7
A customer and a staff member watch a news report on the recent tensions between China and Taiwan, at a beauty salon in Taipei, Taiwan, Thursday, Aug. 4, 2022. Taiwan canceled airline flights Thursday as the Chinese navy fired artillery near the island in retaliation for a top American lawmaker’s visit. (AP Photo/Chiang Ying-ying)

6 of 7
Fishing boat owner Chou Ting-tai, looks out from his boat at the Badouzi fishing port in Keelung, Taiwan Thursday, Aug. 4, 2022. China says it conducted "precision missile strikes" in the Taiwan Strait on Thursday as part of military exercises that have raised tensions in the region to their highest level in decades. (AP Photo/Johnson Lai)

7 of 7
A customer and a staff member watch a news report on the recent tensions between China and Taiwan, at a beauty salon in Taipei, Taiwan, Thursday, Aug. 4, 2022. Taiwan canceled airline flights Thursday as the Chinese navy fired artillery near the island in retaliation for a top American lawmaker’s visit. (AP Photo/Chiang Ying-ying)

KEELUNG, Taiwan (AP) — China conducted “precision missile strikes” Thursday in waters off Taiwan's coasts as part of military exercises that have raised tensions in the region to their highest level in decades following a visit by U.S. House Speaker Nancy Pelosi.

China earlier announced that military exercises by its navy, air force and other departments were underway in six zones surrounding Taiwan, which Beijing claims as its own territory to be annexed by force if necessary.

Five of the missiles fired by China landed in Japan’s Exclusive Economic Zone off Hateruma, an island far south of Japan's main islands, Japanese Defense Minister Nobuo Kishi said. He said Japan protested the missile landings to China as “serious threats to Japan’s national security and the safety of the Japanese people.”

Japan's Defense Ministry also speculated that four missiles flew over Taipei, the capital city, crossing the mainland, according to a statement its embassy in D.C. posted on Twitter. Taiwan's Defense Ministry did not deny the claim, saying that the flight path was "outside the atmosphere and is not harmful to the vast area on the ground it flies over."

The drills were prompted by a visit to Taiwan this week by Pelosi and are intended to advertise China’s threat to attack the self-governing island republic. Along with its moves to isolate Taiwan diplomatically, China has long threatened military retaliation over moves by the island to solidify its de facto independence with the support of key allies including the U.S.

China fired long-range explosive projectiles, the Eastern Theater Command of the People's Liberation Army, the ruling Communist Party's military wing, said in a statement. It also said it carried out multiple conventional missile launches in three different areas in the eastern waters off Taiwan. An accompanying graphic on state broadcaster CCTV showed those occurred in the north, east, and south.

“All missiles hit the target accurately,” the Eastern Theater said in its announcement. No further details were given.

Taiwan's Defense Ministry said it tracked the firing of Chinese Dongfeng series missiles beginning around 1:56 p.m. Thursday. It said in a statement it used various early warning surveillance systems to track the missile launches. It later said it counted 11 Dongfeng missiles in the waters in the north, east and south.

The ministry also said it tracked long-distance rockets and ammunition firing in outlying islands in Matsu, Wuqiu and Dongyin.

Taiwanese President Tsai Ing-wen criticized the drills in a public video address, saying China “destroyed the status quo and violated our sovereignty” with its “irresponsible actions.” She urged China to be “reasonable and restrained.”

“We are calm and not impulsive, we are reasonable and not provocative,” she said. “But we will also be firm and not back down.”

Tsai said Taiwan is in communication with its allies to ensure that things do not escalate further.

Taiwan's Defense Ministry said its forces are on alert and monitoring the situation, while seeking to avoid escalating tensions. Civil defense drills were held last week and notices were placed on designated air raid shelters months ago.

“The three service branches will combine efforts with all the people to jointly safeguard national security and territorial integrity" while adapting to the situation as it develops, the statement said.

Ma Chen-kun, a professor at Taiwan’s National Defense University, said the drills were aimed at showing off the Chinese military’s ability to deploy precision weapons to cut off Taiwan’s links with the outside and facilitate the landing of troops.

The announced drills are “more complete" than previous exercises, he said.

"If the People’s Liberation Army actually invades Taiwan in an all-out invasion, the concrete actions it will take, it’s all in this particular exercise,” Ma said.

“The main thing is they will cut off Taiwan’s links to the outside world, from their sea, they would suppress the coastal defense firepower,” he said.

Meanwhile, the mood in Taiwan was calm.

In Keelung, a city on the northern coast of Taiwan and close to two of the announced drill areas, swimmers took their morning laps in a natural pool built in the ocean.

Lu Chuan-hsiong, 63, was enjoying his morning swim, saying he wasn't worried. “Because Taiwanese and Chinese, we’re all one family. There’s a lot of mainlanders here, too,” he said.

“Everyone should want money, not bullets,” he quipped, saying the economy wasn't doing so well.

Those who have to work on the ocean were more concerned. Fishermen are likely to be the most affected by the drills, which cover six different areas surrounding Taiwan, part of which come into the island's territorial waters.

Most fishermen will continue to try to fish, as it is the season for squid.

“It's very close. This will definitely impact us, but if they want to do this, what can we do? We can just avoid that area,” said Chou Ting-tai, who owns a fishing vessel.

In addition to the missile launches, Taiwan’s Defense Ministry said 22 Chinese fighter jets flew toward the island on Thursday, crossing the midline of the Taiwan Strait.

While the U.S. has not said it would intervene, it has bases and forward-deployed assets in the area, including aircraft carrier battle groups.

On Thursday, the U.S. Navy said its USS Ronald Reagan aircraft carrier was operating in the Philippine Sea, east of Taiwan, as part of “normal scheduled operations."

Secretary of State Antony Blinken addressed the drills Thursday saying, “I hope very much that Beijing will not manufacture a crisis or seek a pretext to increase its aggressive military activity. We countries around the world believe that escalation serves no one and could have unintended consequences that serve no one’s interests.”

U.S. law requires the government to treat threats to Taiwan, including blockades, as matters of “grave concern."

The drills are due to run from Thursday to Sunday and include missile strikes on targets in the seas north and south of the island in an echo of the last major Chinese military drills aimed at intimidating Taiwan's leaders and voters held in 1995 and 1996.

On the diplomatic front, China canceled a foreign ministers’ meeting with Japan to protest a statement from the Group of Seven nations that there is no justification for the exercises. Both ministers are attending a meeting of the Association of Southeast Asian Nations in Cambodia.

“Japan, together with other members of the G-7 and the EU, made an irresponsible statement accusing China and confounding right and wrong,” Chinese Foreign Ministry spokesperson Hua Chunying said in Beijing.

While China has given no word on numbers of troops and military assets involved, the exercises could be the largest held near Taiwan in geographical terms, experts have said.