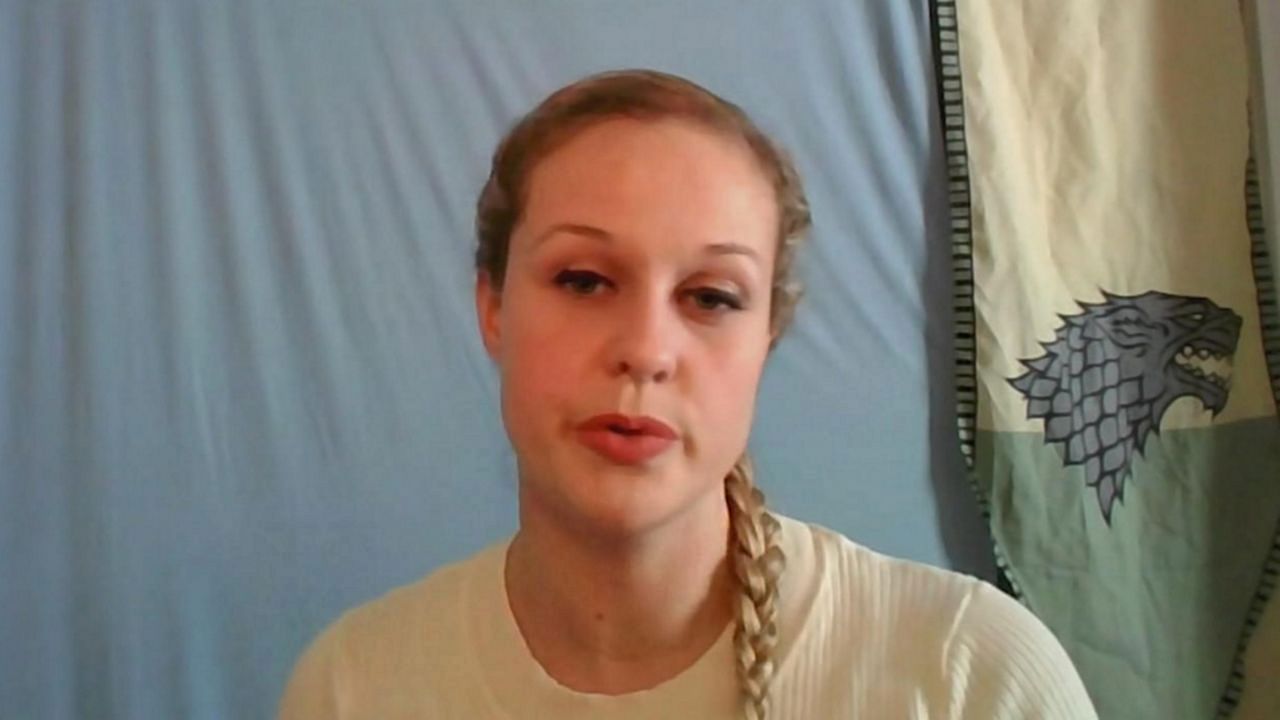 "(Florida Gov. Ron) DeSantis needs to worry less about what I'm writing about, and more about the people who are sick and dying in his state. And doing this to me, will not stop me from reporting the data, ever," Rebekah Jones said on CNN on Monday night. (Spectrum News file photo of Rebekah Jones)

Agents afforded Ms. Jones ample time to come to the door and resolve this matter in a civil and professional manner. As this video will demonstrate, any risk or danger to Ms. Jones or her family was the result of her actions," he said.

Swearingen added that he was "proud" of the way his agents performed and called on Jones to release video that allegedly recorded during the incident.

ORLANDO, Fla. — Rebekah Jones, the former data manager of Florida's COVID-19 dashboard, had her home raided by law enforcement on Monday morning, according to her Twitter account and authorities.

She was known for her work on Florida’s coronavirus dashboard, the clearinghouse for public information from the Florida Department of Health.

The state fired her in May 2020 after she raised questions about Florida's COVID data. She had been reprimanded several times and was ultimately fired for violating Health Department policy by making public remarks about the information, state records show.

She then went on to create her own online COVID tracking dashboard called The COVID Monitor.

State health officials strenuously deny any issue with their information’s accuracy. The office of Gov. Ron DeSantis declined comment Monday night on the raid, but the Republican governor has previously said Jones had a pattern of “insubordination” and should have been fired sooner.

On Wednesday, the governor's office emailed this statement to Spectrum News:

“Evidence is abundantly clear that the governor had no knowledge of this investigation until 5 o’clock like everyone else. This is an independent law enforcement investigation, and the Governor will respect the legal process and let it play out.”

The Florida Department of Health is investigating whether she accessed a government messaging system without authorization.

According to the search warrant affidavit, investigators said that on November 10, a message was posted to a state emergency health channel that read, "It's time to speak up before another 17,000 people are dead. You know this is wrong. You don't have to be part of this. Be a hero. Speak out before it's too late."

Investigators said the message came from her IP address.

Jones, for her part, says the state is manipulating COVID-19 numbers to make them look better than they really are, and because of that, she has been getting harassed, and the person behind it, she maintains, is Gov. Ron DeSantis.

"Come outside, outside. Who else is in the house ma'am?" the officers asked Monday morning.

1/
There will be no update today.

At 8:30 am this morning, state police came into my house and took all my hardware and tech.

They were serving a warrant on my computer after DOH filed a complaint.

About 10 officers ordered Jones' family to come downstairs in the raid on her Tallahassee home Monday.

The Florida Department of Law Enforcement says agents knocked on the door and called her beforehand, but she did not respond, and said guns were never pointed at anyone in the home.

“Agents knocked and called Ms. Jones both announcing the search warrant and encouraging her to cooperate.  Ms. Jones refused to come to the door for 20 minutes and hung-up on agents,” the FDLE noted in a news release.

She spoke to CNN's Chris Cuomo on Monday night.

"They took my phone. And they took my computer that I use to run my companies. And on my phone is every communication I've ever had with someone who works at the state who has come to me in confidence and told me things that can get them fired," Jones told Cuomo.

She urged those people to be careful, saying they could be retaliated against.

"DeSantis needs to worry less about what I'm writing about and more about the people who are sick and dying in his state. And doing this to me will not stop me from reporting the data, ever," Jones said.

Officers are investigating whether Jones accessed a state government messaging system without authorization to urge employees to speak out about coronavirus deaths, a claim she denies. The FDLE says its investigation shows an unauthorized message was traced to her home, and any evidence will be referred to the state attorney's office.

The Tampa Bay Times first reported someone hacked into the Department of Health’s system in early November, warning recipients to “speak up before another 17,000 people are dead. You know this is wrong. You don’t have to be a part of this. Be a hero. Speak out before it’s too late.”

"Did you send that text on that system?" Cuomo asked.

"No, I haven't had access to any systems at DOH (Department of Health) for over six months. I'm not a hacker, as the governor pointed out many months ago. I'm not that tech-savvy," Jones answered.

Jones's attorney, Lawrence G. Walters, said his client was fully cooperative during the encounter at her home, and the officers were reckless and aggressive. In a written statement, Walters said:

The actions of Florida law enforcement captured on my client’s video depicts unnecessarily reckless and aggressive behavior in the execution of a search warrant for computers. Our client was fully cooperative yet had guns pointed at her and her family. We are concerned that these actions may be retaliation in response to her whistleblower claim against the Department of Health and her criticism of the Governor’s COVID 19 response.

We will thoroughly investigate the alleged basis for this search which resulted in the forced disclosure of confidential communications with our adversary in litigation. We also intend to pursue all lawful avenues to seek return of our client’s property and vindicate her civil rights.

DeSantis's spokesperson said he had no involvement in the raid.