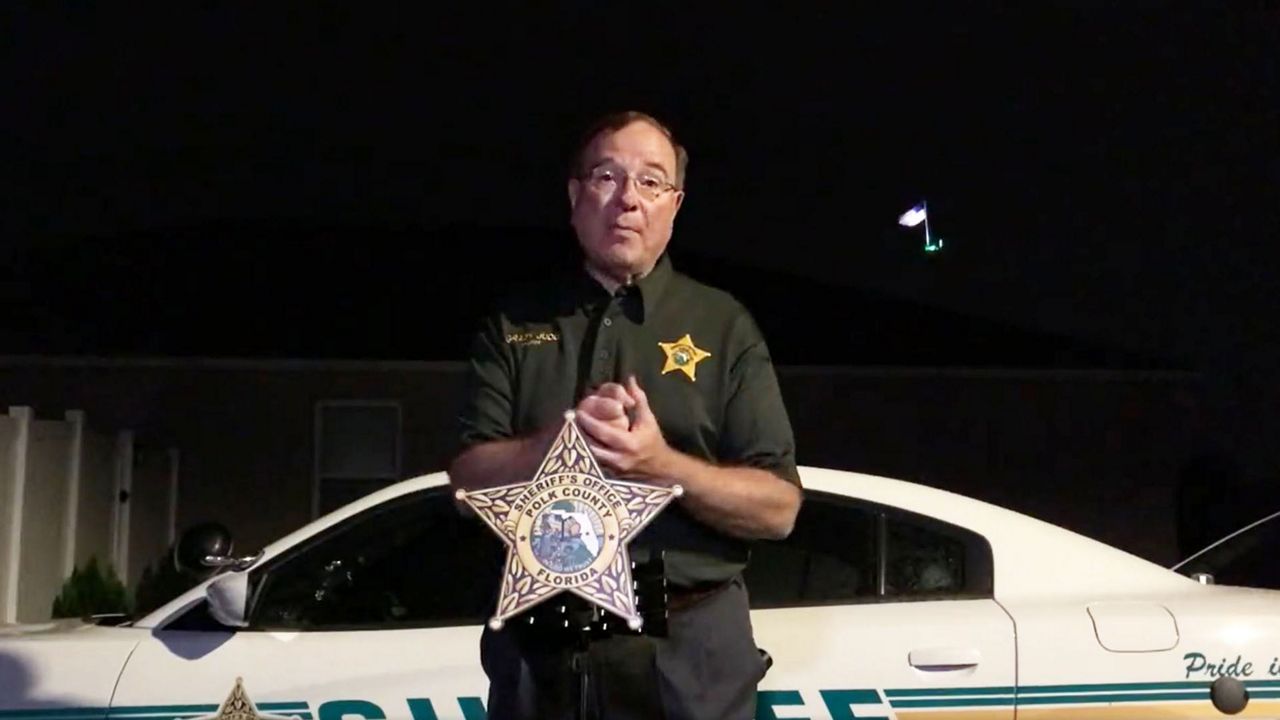 “As soon as we went to tase him, he shot my deputy in the chest,” said Polk County Sheriff Grady Judd. “Fortunately, our deputy was wearing a bulletproof vest. … The vest saved his life.” (Polk County Sheriff's Office)

In a video posted from the Sheriff’s Office’s Twitter account, Polk County Sheriff Grady Judd described how two deputies, who were later identified as Harodis "Tony" Nunez and Nicole Lyons, arrived at the Tanglewood Preserve subdivision in Davenport a little after 10 p.m. for a family disturbance call.

“As you know, those kinds of calls are very, very dangerous,” Judd said in the video.

While details will be released on Thursday afternoon, Judd said, he described how the two deputies went into the house to speak with the victims, but the suspect, 41-year-old Gabriel Batista, was not in the home but was nearby.

“While my deputies were talking to the victims, the suspect drove past two mark patrol cars,” he said.

Batista allegedly got out of the car with his hands behind his back and confronted the deputies, Judd said.

Deputies requested that Batista show his hands, but he refused, the sheriff said. One deputy tried to use a stun gun on him while the other had his firearm drawn on Batista, Judd said.

“As soon as we went to tase him, he shot my deputy (Nunez) in the chest,” he said. “Fortunately, our deputy was wearing a bulletproof vest. … The vest saved his life.”

Judd said later on during a press conference that Batista had shot at Nunez six times, striking him once in the center of the chest. Nunez was wearing a bulletproof vest and a St. Michael medallion he never leaves home without, Judd said, adding that he had a scuff mark on his chest.

Nunez was transported to Lakeland Regional Health and is in “great condition," Judd said, where he was treated and released.

"I am very happy to report that Deputy Nunez was released from the hospital this morning. He is sore, but recuperating. Domestic violence calls are among the most dangerous our deputies respond to. Gabriel asked for us to kill him and we would have fulfilled his request if Deputy Nunez's gun didn't jam. We will be holding Gabriel accountable for his depraved violence against our deputies," said Judd.

The other deputy returned fire. Batista was not hit but he got on the ground and threw his gun down, Judd said.

After his arrest, Batista told detectives that when he learned law enforcement responded to the residence, he chose to return to commit, "second-hand suicide," according to the sheriff's office.

Batista was charged with Attempted 1st Degree Murder of LEO (2-counts, FL), Written Threat to Kill (F2), Resisting with Violence (F3), and Discharging a Firearm on Residential Property (M1), according to the Polk County Sheriff's Office.