Damage can be seen in the town of Guayanilla after a powerful earthquake struck Puerto Rico on Tuesday, January 7, 2020. (Photo courtesy of the family and friends of Belisa Rivera Negron) 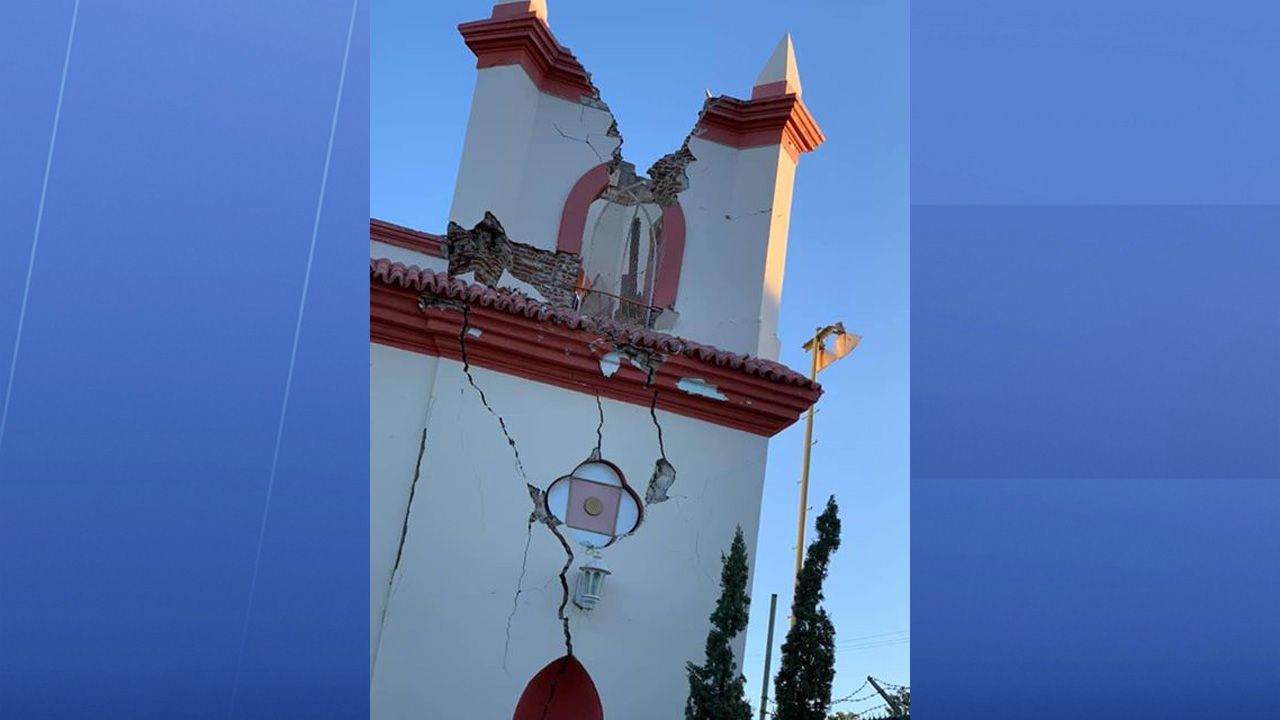 1 of 9
Damage, like that of the Guayanilla Catholic Church, can be seen in the town of Guayanilla after a powerful earthquake struck Puerto Rico on Tuesday, January 7, 2020. (Photo courtesy of the family and friends of Belisa Rivera Negron) 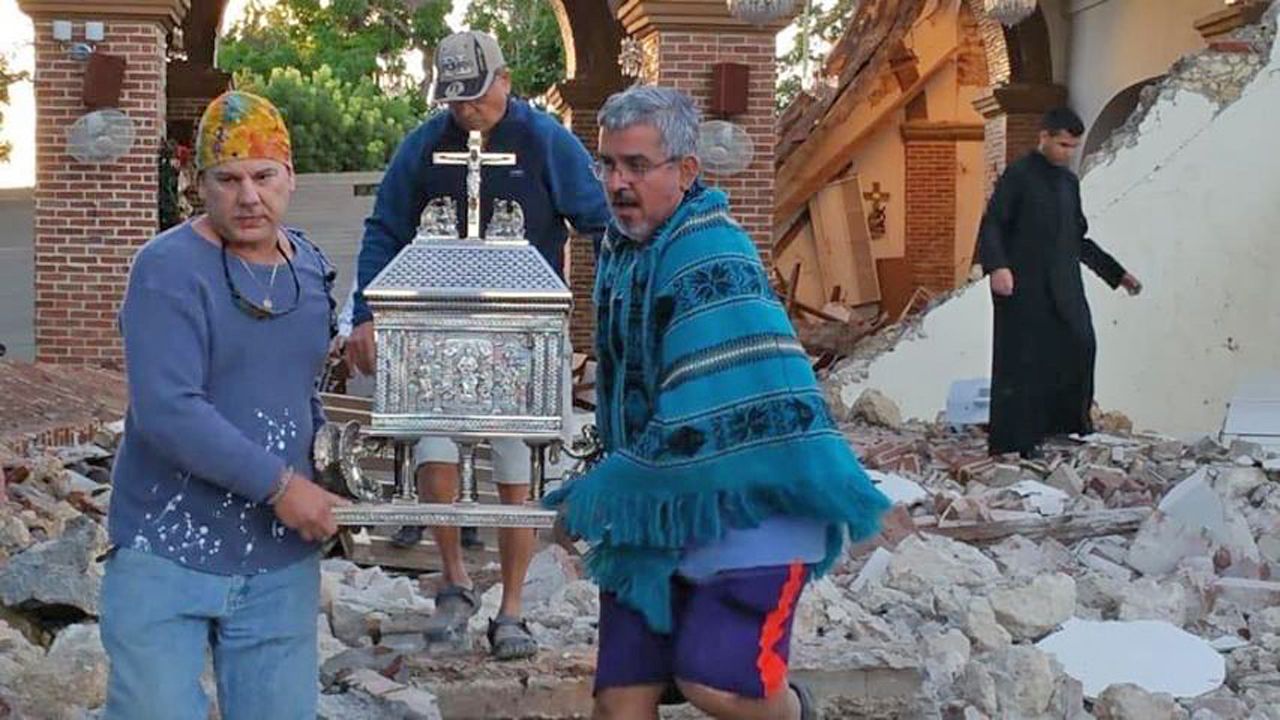 2 of 9
Damage, like that of the Guayanilla Catholic Church, can be seen in the town of Guayanilla after a powerful earthquake struck Puerto Rico on Tuesday, January 7, 2020. People are seen taking a religious relic out of the damage church. (Photo courtesy of the family and friends of Belisa Rivera Negron) 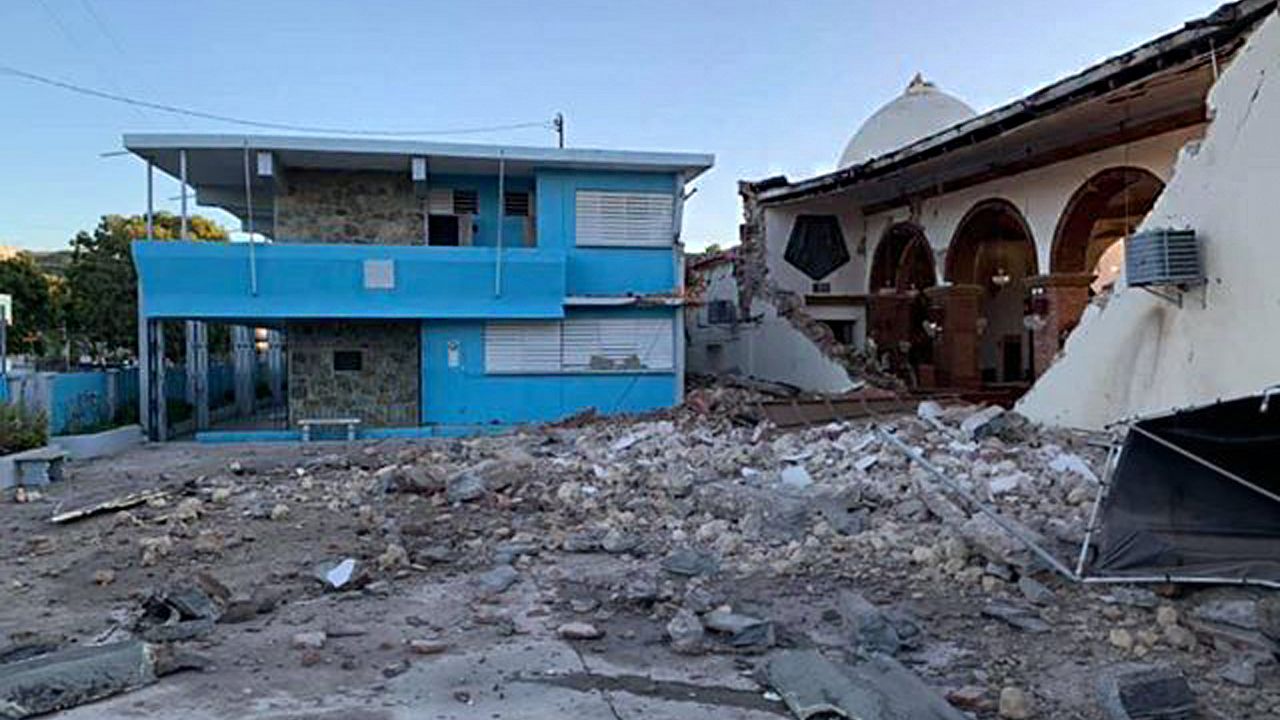 3 of 9
Damage, like that of the Guayanilla Catholic Church, can be seen in the town of Guayanilla after a powerful earthquake struck Puerto Rico on Tuesday, January 7, 2020. (Photo courtesy of the family and friends of Belisa Rivera Negron) 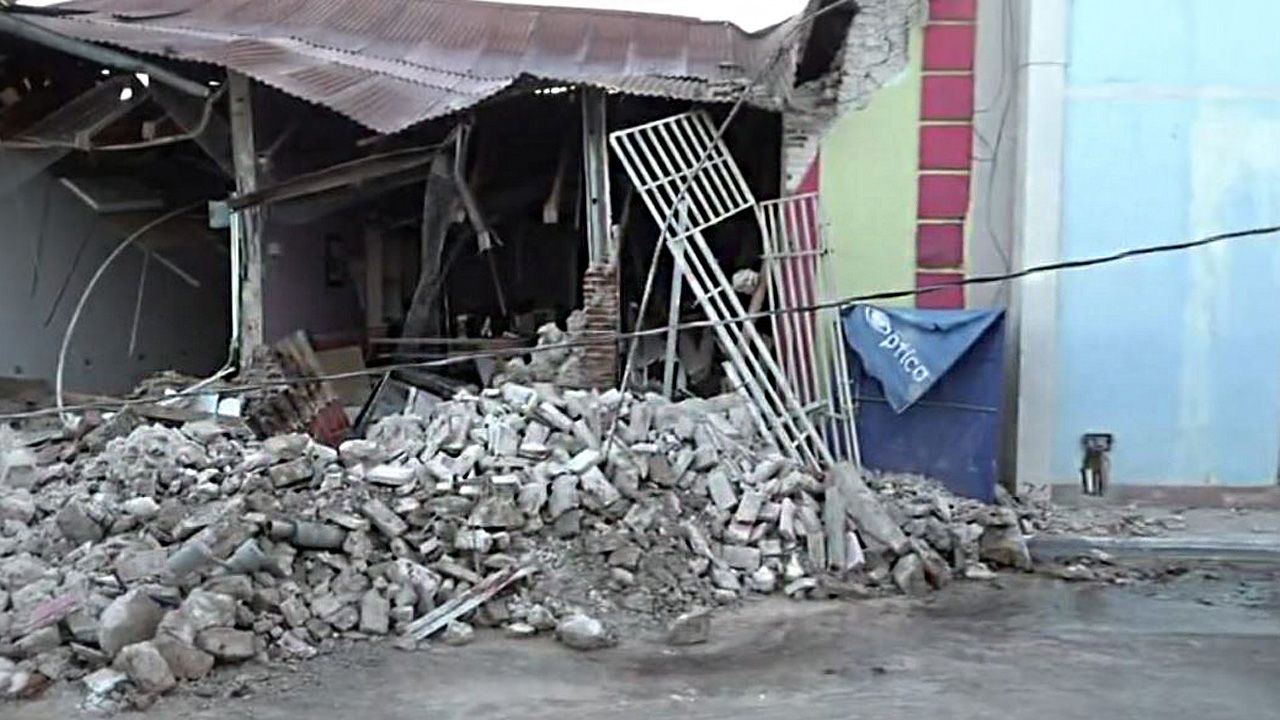 4 of 9
A home in Guanica suffered great damage after an earthquake struck Puerto Rico on Tuesday, January 7, 2020. (Photo courtesy of the family and friends of Felix J. Quirindongo Muniz) 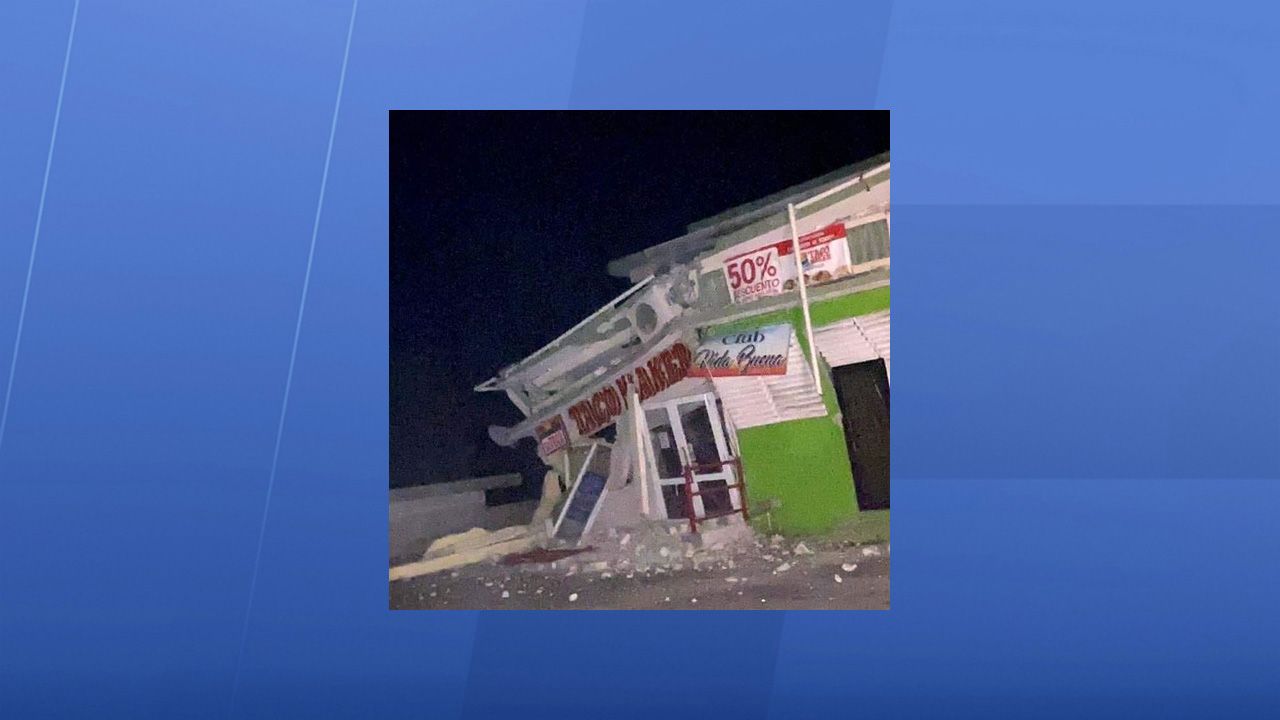 5 of 9
The restaurant Taco Maker in Guanica suffered great damage after an earthquake struck Puerto Rico on Tuesday, January 7, 2020. (Photo courtesy of the family and friends of Felix J. Quirindongo Muniz) 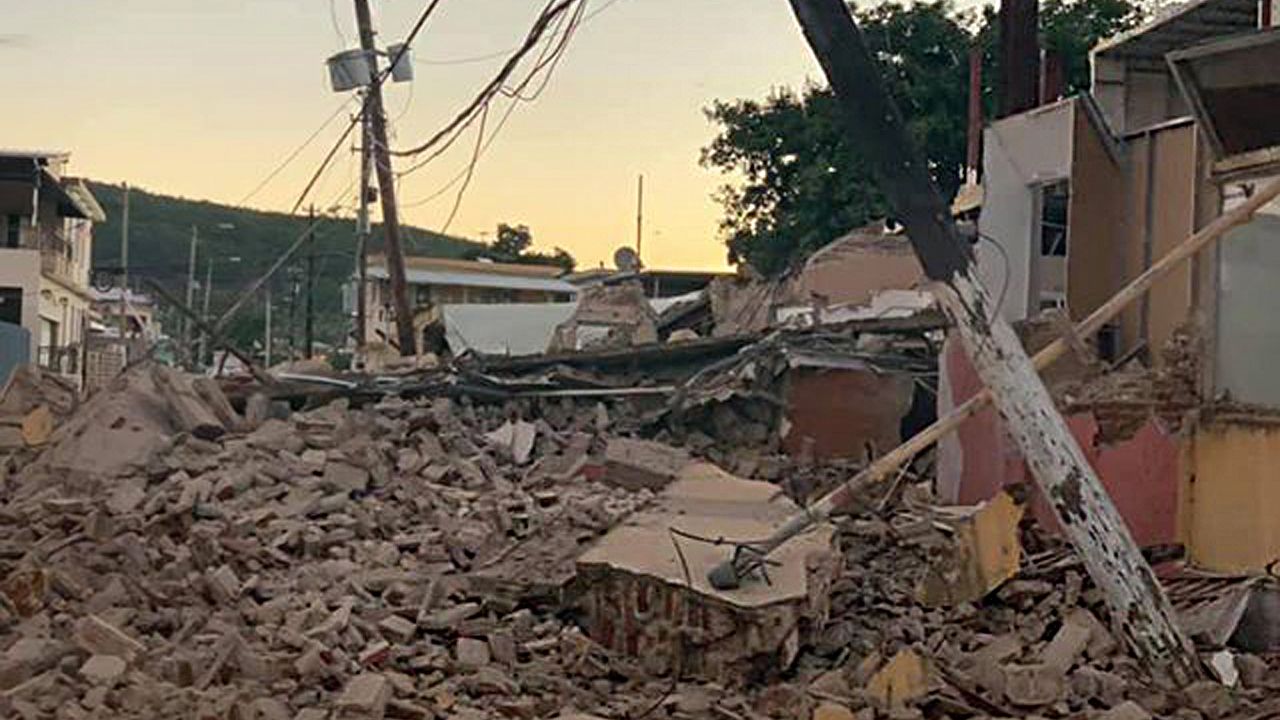 6 of 9
Damage can be seen in the town of Guayanilla after a powerful earthquake struck Puerto Rico on Tuesday, January 7, 2020. (Photo courtesy of the family and friends of Belisa Rivera Negron) 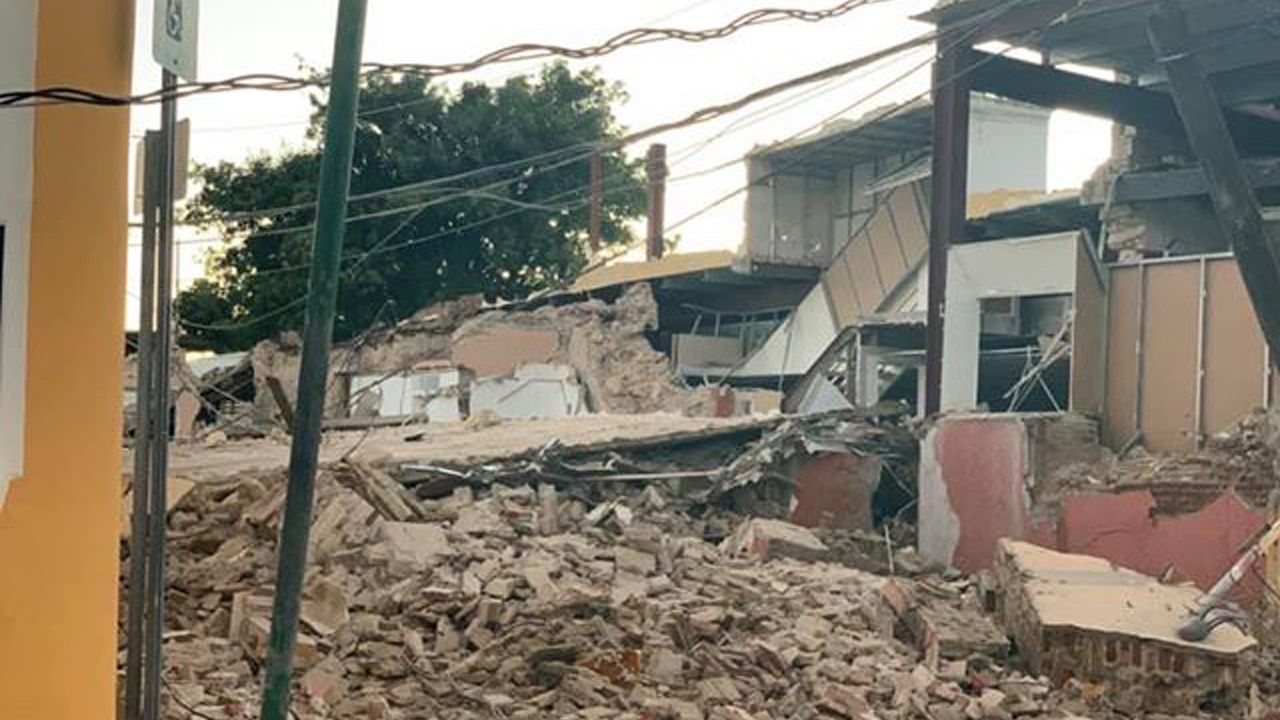 7 of 9
Damage, like that of the Guayanilla Catholic Church, can be seen in the town of Guayanilla after a powerful earthquake struck Puerto Rico on Tuesday, January 7, 2020. (Photo courtesy of the family and friends of Belisa Rivera Negron) 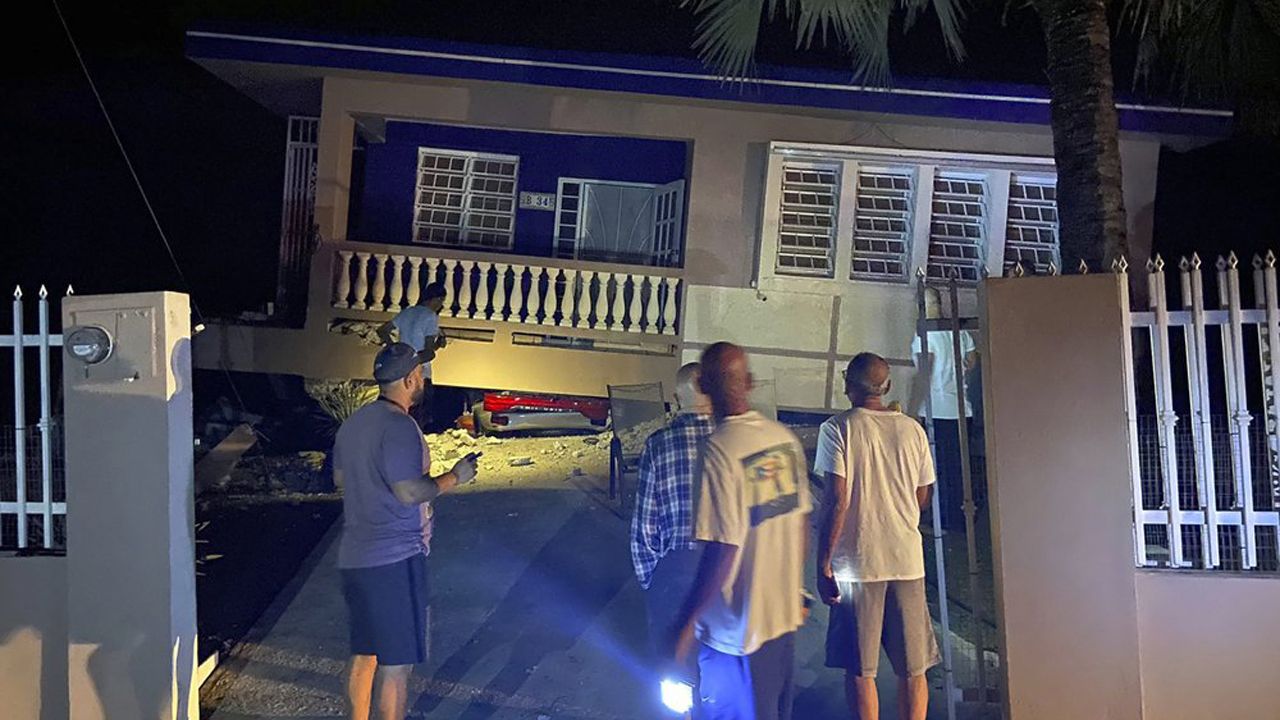 8 of 9
A collapsed building with car crushed underneath, following an earthquake in Yauco, Puerto Rico, Tuesday Jan. 7, 2020. All the occupants of the home are reported to be uninjured. A 6.5-magnitude earthquake struck Puerto Rico, the largest in a series of quakes in recent days, and caused heavy damage in some areas. (J. Miguel Santiago Twitter via AP) 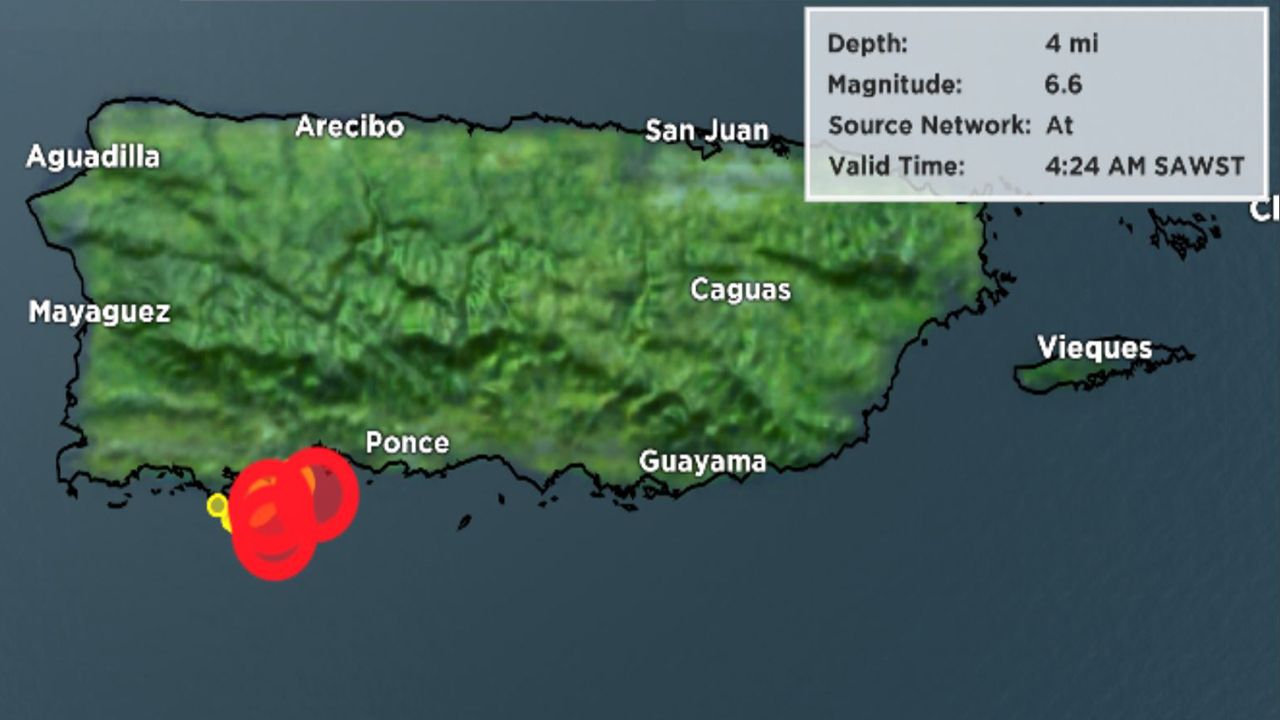 SAN JUAN, Puerto Rico — One of the strongest earthquakes in a generation rattled Puerto Rico before dawn Tuesday, the second one in as many days. At least one person is dead, and the governor has declared a state of emergency.

A magnitude 6.4 earthquake struck Puerto Rico on January 7, 2020, at 4:24 am local time. Over the past several weeks, hundreds of small earthquakes have occurred in this same region. For more info, read the Top Story at https://t.co/zk7SklPMYY pic.twitter.com/CXmtIywfSt

At least eight people were injured in the city of Ponce, near the epicenter of the quake, Mayor Mayita Meléndez told WAPA television. Roads in Tallaboa, west of Ponce, were impassable, and some buildings severely damaged.

Puerto Rico's power authority said on Twitter that one of the country's main power plants, which sits near the epicenter, had been damaged. Officials said they expected to restore power to the island later Tuesday.

PREPA ALERT: José Ortiz, CEO of PREPA, informs that damages have been reported in Central Costa Sur and we are evaluating substations throughout the island. If no other mayor issues occur with our system we should reenergize early during the day. CC7 pic.twitter.com/5K8ZqkC7zV

The U.S. Geological Survey measured the quake at magnitude 6.4, with more than two dozen aftershocks ranging from 3.8 to 5.8.

In a Facebook Messenger interview, Felix J. Quirindongo Muniz of Altamonte Springs shared pictures with Spectrum News 13 that his family and friends took of the destruction in the U.S. territory. He also shared his worry for his family who live in Puerto Rico.

"It's overwhelming, really. My dad is bedridden, and we're going to try to move here. It's hard. There's no power in the whole island and no news from Vieques and Culebra," Muniz said.

He said his parents and cousins are moving to another house because their home was damaged in Tuesday's quake.

"Cousins moving together also, just to be together and help each other. Some cracks on the walls and ceilings. They don't want to risk it ...," he shared.

Camille Feliciano, 73, lives in the western region of Puerto Rico. She said she thought she was safe from the earthquake but woke to her home shaking.

"I was sleeping in the second floor, so I ran down then went outside, and then the lights went out," Feliciano said.

Feliciano said she is afraid a bigger earthquake may hit her island.

Tampa resident Vilmari Nazario has family in Ponce, near the epicenter.

She says they are nervous and scared, but otherwise OK.

It stirred up feelings reminiscent of those moments following Hurricane Maria.

“Yeah, I feel a lot of fear, anxiety because I have family and friends there and it’s hard being so far away and not being with them,” she said.

At least one person was reported dead. Teacher Rey González told the Associated Press that his uncle was killed when a wall collapsed on him at the home they shared. He said 73-year-old Nelson Martínez was disabled and that he and his father cared for him.

Puerto Rico Gov. Wanda Vázquez Garced has signed a state of emergency declaration and activated the island's National Guard. She tweeted in Spanish that the government is ready to assist.

On Monday, a 5.8-magnitude earthquake struck the island, with its epicenter near Indios. It led to widespread power outages and small landslides, with cars crushed and boulders blocking highways.

For those in Florida with family back on the island, getting in touch with loved ones was critical after seeing images of the aftermath.

"It's very sad for all the families that are suffering from this catastrophe," said Aldofina Ortiz who lives in Orlando but has family living in Puerto Rico.

According to the Puerto Rico Seismic Network, one of the strongest earthquakes to hit Puerto Rico struck in 1918. That quake was 7.3 and caused severe damage to bridges and homes and triggered landslides and a tsunami. The 1918 quake killed 116 people.

In the wake of the earthquakes, airlines are waiving change and cancellation fees for travelers to and from the island this week.

Follow the links below to see the details about airline fee waivers from the following companies:

Most passengers Spectrum News spoke to at Orlando International Airport coming from San Juan, Puerto Rico, said they were concerned to leave their family behind, given the circumstances.

Irving Ocasio from Fajardo said the island needs all the help it can get.

"The island is not 100 percent what it was. After Hurricane Maria the electricity comes and goes. Right after these trembles the island went pitch black... The electrical system in Puerto Rico needs help," he described.

Help from the Mainland

The Hispanic Federation is teaming up with other organizations to help the people on the island.

The organization has already distributed 30,000 solar lamps to those in Puerto Rico who don’t have power.

"A light makes a difference. It’s a hope in the midst of the dark, so we know its essential for our families there," said Yanidsi Velez, Florida Director of the Hispanic Federation.

Velez said the team is still in the early stages of planning, but the group is getting ready to help the people living in Puerto Rico like they did for Hurricane Maria.