That’s how the historic Garden Theatre in Winter Garden sees and presents her. As a matter of fact, that’s what the theater insists of anybody who comes in contact — or perhaps even makes eye contact — with its production of “Matilda the Musical.”

And audience members wear masks — or they’re out the door.

The no-exceptions mask mandate marks one in a extraordinary series of steps the Garden Theatre has taken during the coronavirus pandemic.

It has removed seats from the theater to ensure social distancing. It has established entrances on each side of the theater to prevent crowding. And it has reinvented the Roald Dahl “Matilda” story — about a telekinetic and resilient young girl — to protect everybody, especially its child actors.

“Everything that we have done since we opened has really been about the health and safety of our audience and our performers,” said Joseph C. Walsh, the Garden Theatre’s artistic director.

The theater says it has seen no coronavirus cases since its late August reopening. 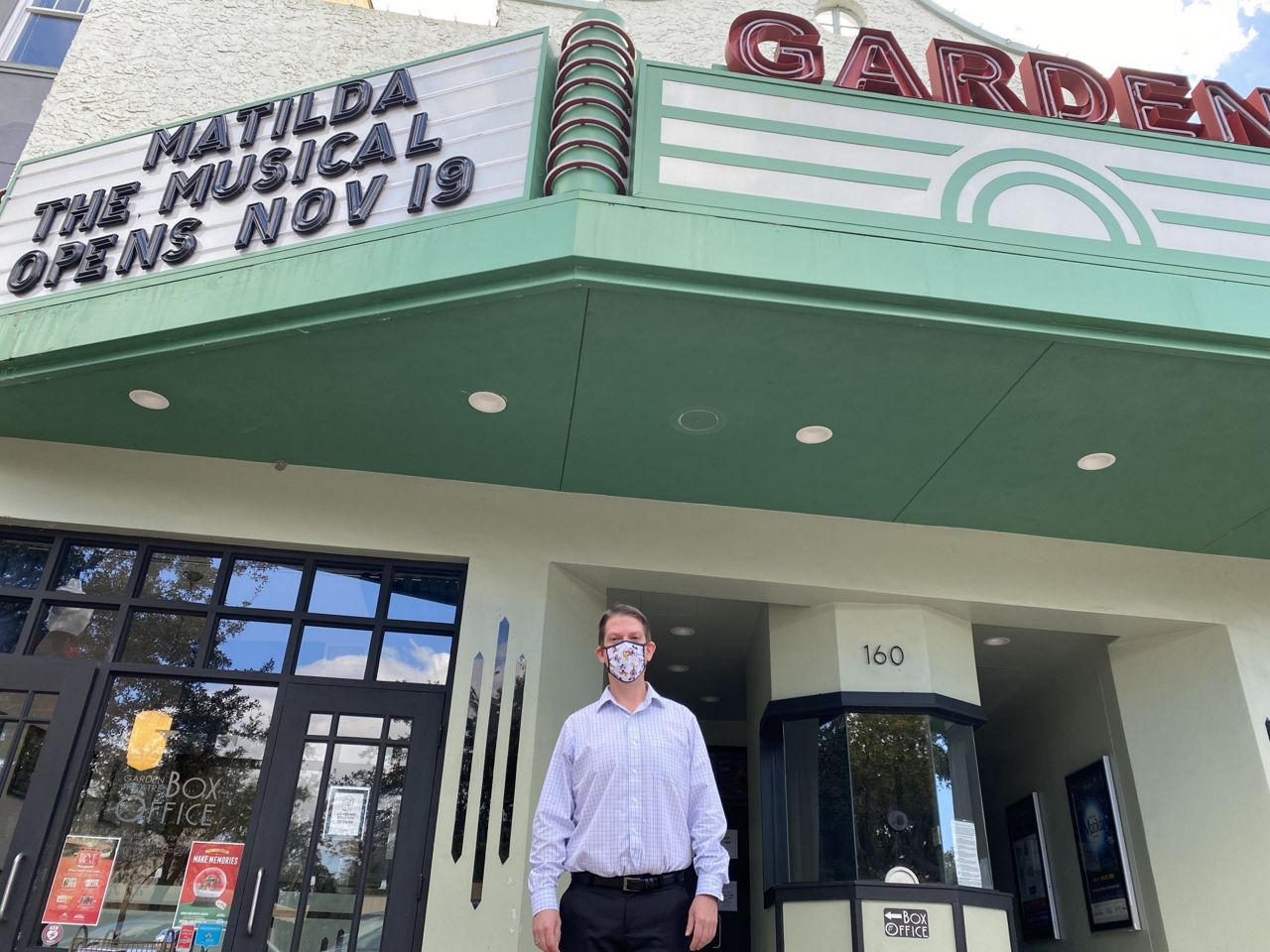 An Awful Time for Actors, Venues

The Garden Theatre’s measures come as the performing arts and the entertainment industry continue to feel the crushing effects of the coronavirus. The pandemic has prompted theater and playhouse closings, out-of-work performers and personnel, and support efforts including the Greater Orlando Social Distance Showcase and the Central Florida Performing Artist Relief Fund.

The pandemic also forced postponement until next year of the Broadway in Orlando series at the Dr. Phillips Center for the Performing Arts. Even New York Broadway shows remain shut down through May.

“I feel terrible … because Orlando is such a heavy performer town,” said Lillie Eliza Thomas, a Winter Park-based actor and University of Central Florida graduate who plays Miss Honey in “Matilda.” “It hurts me to see my friends not able to perform as much as they did before. But I feel like things are slowly coming back, and that's why I appreciate the Garden setting a great example.”

The theater postponed performances in March upon the onset of the coronavirus but later became the region’s reported first venue of its kind to set the stage for a reopening, with elaborate safety protocols for patrons and actors.

Theater officials relied for starters on Centers for Disease Control and Prevention guidelines, Walsh said. They talked with AdventHealth and the City of Winter Garden. They also got a first-hand look at how Universal Orlando was handling seating and safety guidelines for its performances.

The theatre cut its capacity about in half to 150 – removing seats to promote distancing and to ensure separation of groups that didn’t come to the theater together.

An internal committee established rules that everybody must wear a mask and that each side of the venue would be assigned separate entrances. Since food and drink would require the removal of masks, the panel also declared that the theater would sell no concessions.

“When you’re doing a show of this size at a 50% seating capacity, this is not about making a profit,” said Walsh, the artistic director. “This is not about business. This is about art, and giving people a safe-as-possible place to come and gather and share stories and do what we do, which has offered comfort and community, and that is really our only goal.”

The Remaking of “Matilda”

All three productions since late August have featured masked performers. With “Matilda,” the theater has taken extraordinary steps to present what Walsh calls “a very unique production” that “we have kind of built from the ground up.”

The show opened on November 19 and runs through December 20. As opposed to his recent production of “Hello, Dolly!” when a single performer occasionally would remove a mask, Walsh’s “Matilda” maintains masks at all times — a decision inspired by the musical’s heavy reliance on child actors, he said.

The show also features social distancing — even on a compact stage — and no touching of skin. In a scene that calls for a face-to-face hug between Matilda and Miss Honey, Walsh has Miss Honey turn around and Matilda hug her around the waist from behind.

Even with masks, Walsh said, “we just want to be very aware that we don’t have actors’ faces close to each other.”

During rehearsals, actors say Walsh and other stage personnel constantly would remind them to maintain safe spacing, shouting “Six feet!”

The masks have remained an understandable challenge for actors and audience alike. In “Matilda,” performers speak in British accents. A dialect coach helped actors make themselves understandable through the masks, said Carson Holley, 12, a Gainesville actor and singer who plays the lead role of Matilda.

Joseph C. Walsh, artistic director at Winter Garden’s Garden Theatre, explains some COVID safety protocols for actors, many of them children, in the production of “Matilda,” which runs through Dec. 20. pic.twitter.com/58D3yZwLMO

“I’m challenging myself as an actress,” she said.

“The fact that they are entering a space, they're putting themselves up on stage, they’re singing and dancing in masks – they’re just the bravest souls,” Walsh said.

Backstage, child performers get personal cubicles to keep them separate. They carry hand sanitizer everywhere, and all props get sanitized before anybody else touches them, they said.

Also, rather than gather together near stage entrances, performers wait at designated spaced spots marked with an “X.” 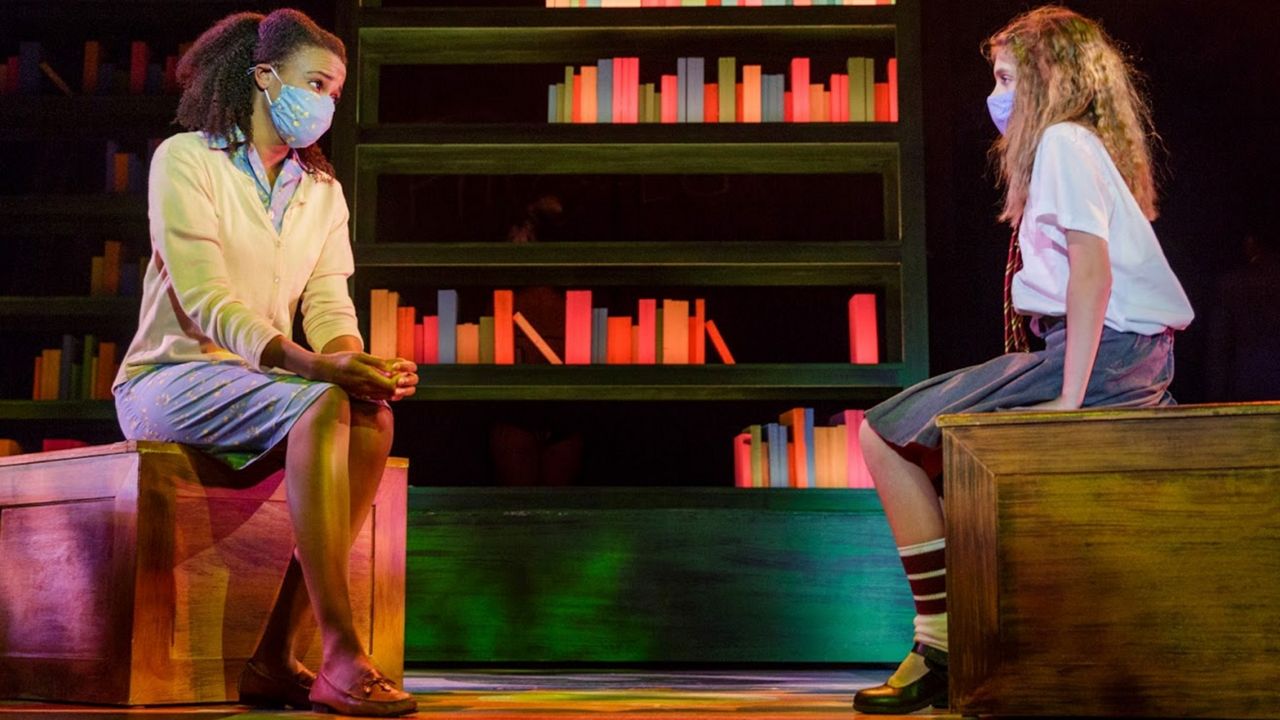 Garden Theatre patron Christina Whittaker said the venue’s performances since late August have made her feel “safe and wonderful” — so much so that she applied some of its safety protocols to her theater students at Ocoee High School.

As of early Thursday, limited seats remained available for “Matilda” on Friday, Saturday and Sunday.

Laura Holley, mother of Carson, who plays Matilda, expressed appreciation and excitement for the steps the Garden Theatre has taken. That includes having not allowed her to enter the theater until her daughter’s first performance.

Witnessing the performances thereby has moved her to tears, she said.