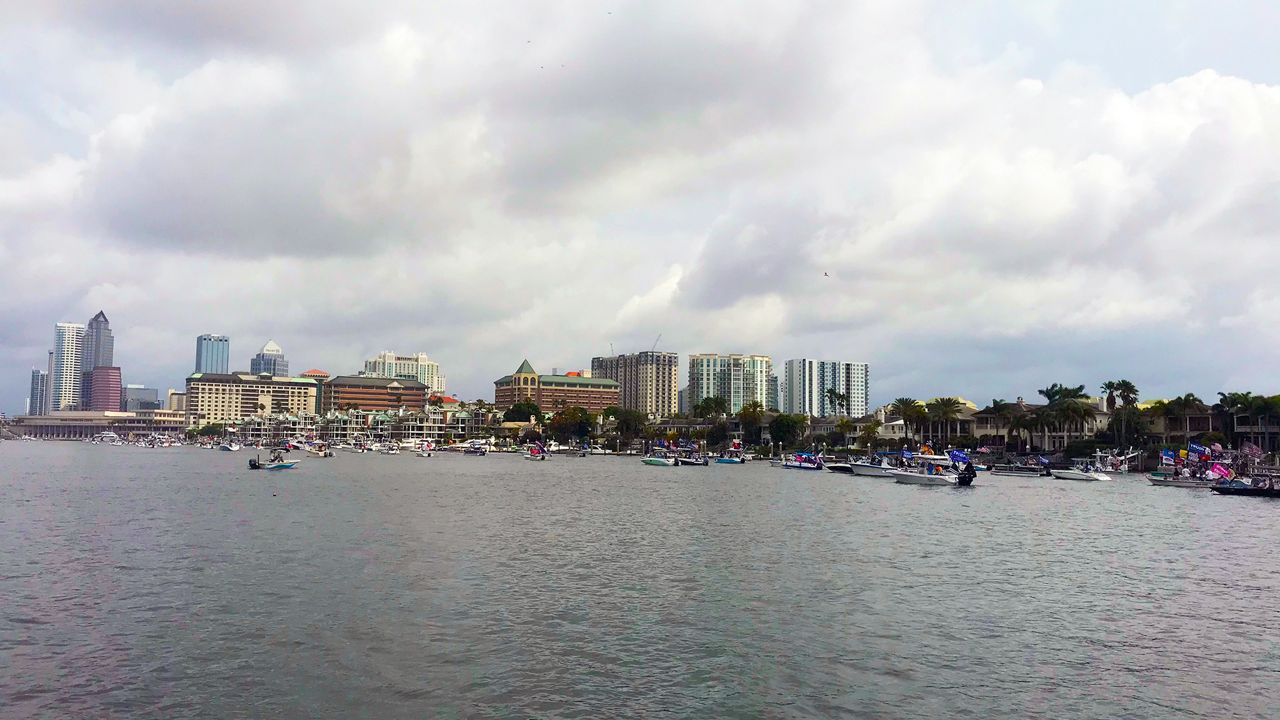 Jake Hoffman, one of the organizers of Saturday’s event, said he felt given the Tampa Bay Lightning’s boat parade and the Bucs celebration that there was no reason Gasparilla should have been called off. (Spectrum News/Angie Angers)

TAMPA, Fla. — While the official Gasparilla Pirate Festival was canceled for 2021, you would not have known it looking at the Hillsborough River on Saturday.

Two conservative groups planned their own versions of the annual boat parade and set sail from Davis Island on Saturday morning. The parade ended with a party on Beer Can Island.

Gasparilla was supposed to be today, but the official event was cancelled due to COVID concerns.

Instead, hundreds of boats (and pirates) descended on the Hillsborough River today for a Gasparilla parade of their own ⁦@BN9⁩ pic.twitter.com/d80xxupvXl

While the usual late-January Gasparilla experience does feature a boat parade, it’s become notorious over the years for the intense street party that begins early on a Saturday morning in South Tampa and goes on all day, attracting hundreds of thousands of revelers to the region – not an ideal situation as the area still contends with COVID-19.

“I’ve said it before — if you don’t believe that we should have boat parades, then don’t go,” says Cliff Gephart, who is organizing a second boat parade this weekend titled the “Trumparilla Boat Invasion” which is slated to begin at 10:30 a.m. from Marjorie Park in Tampa. “If you do feel that you’re safe enough and your health and family is okay to participate in things that happen in life, then you should participate.”

Ye Mystic Krewe of Gasparilla, who puts on the event in conjunction with the city of Tampa, canceled it back in February due to COVID-19 concerns.

Jake Hoffman, one of the organizers of Saturday’s event, said he felt given the Tampa Bay Lightning’s boat parade and the Bucs celebration that there was no reason Gasparilla should have been called off.

“I think it’s hypocritical,” he said. “We had a city-sanctioned Super Bowl parade that was massive. The Super Bowl festivities were massive.”

The event was advertised on Facebook by the Tampa Bay Young Republicans.

"ARRGHH! Pirates don't cancel invasions and they don't take orders from tyrants! If the Bucs can throw a boat parade, so can Ye!,” it read.

Organizers estimate that more than 1,000 people participated in the boat parade with hundreds of boats in attendance. ​