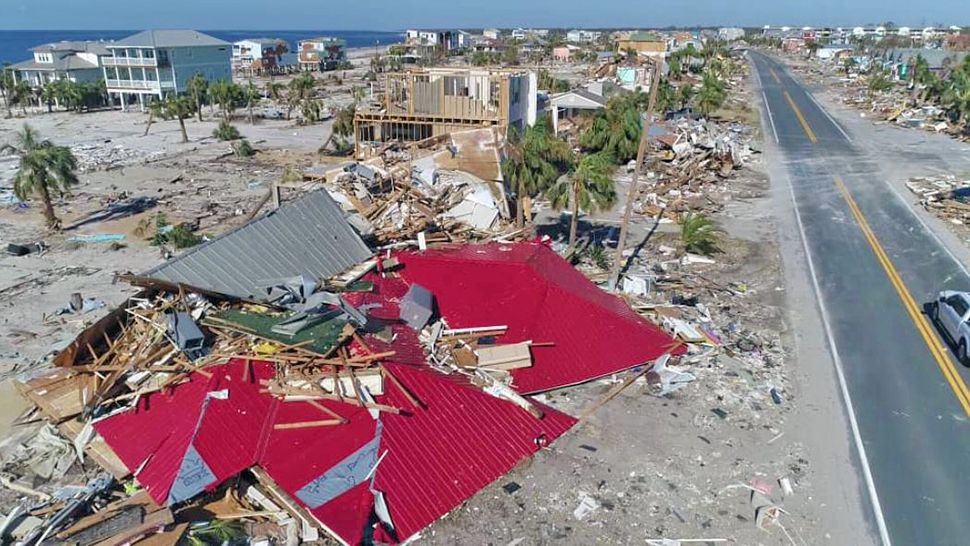 1 of 5
Destruction like this is now a familiar sight in Mexico Beach, which is one of the hardest-hit areas from Hurricane Michael. (Tony Rojek/Spectrum News) 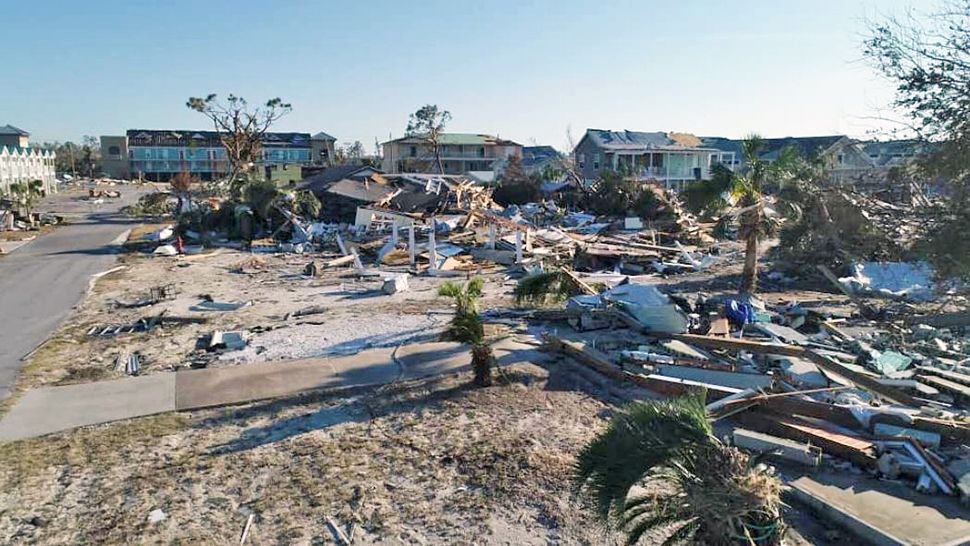 2 of 5
Wide-spread destruction like this is common in Mexico Beach after Hurricane Michael. (Tony Rojek/Spectrum News) 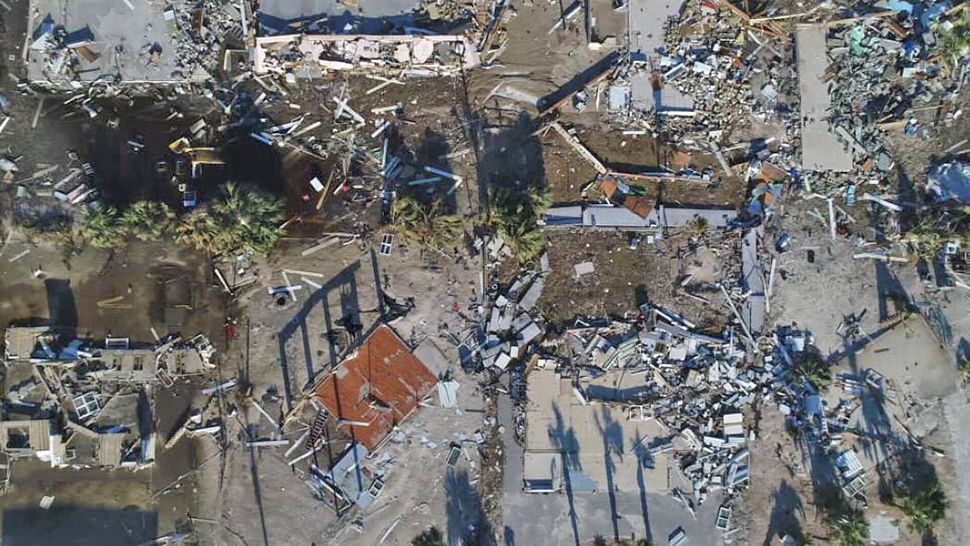 3 of 5
An overhead view of Mexico Beach from Drone 13. The image shows the destruction caused by Hurricane Michael. (Tony Rojek/Spectrum News) 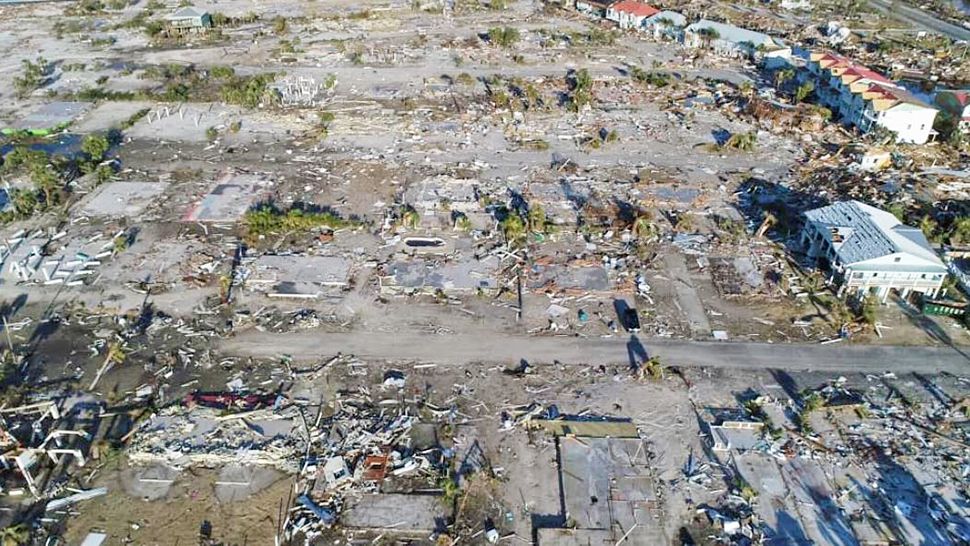 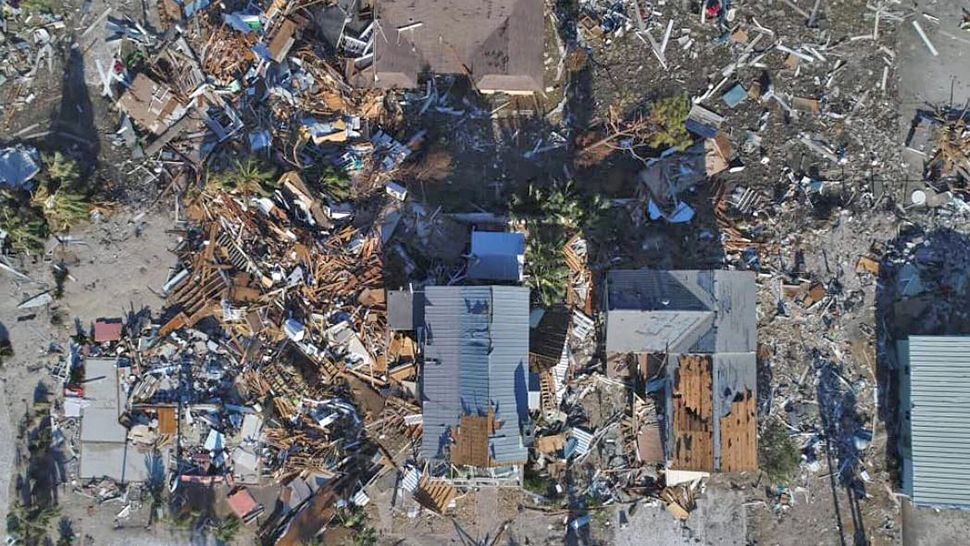 5 of 5
An overhead view of Mexico Beach from Drone 13. The image shows the destruction caused by Hurricane Michael. (Tony Rojek/Spectrum News)

The president got a bird's eye view of houses without roofs, a toppled water tower and 18-wheel trucks scattered in a parking lot during a nearly hour-long helicopter tour.

The Associated Press said Trump also saw Tyndall Air Force Base, which was heavily damaged by the storm.

Trump landed at an airport near Panama City, where power poles bowed toward the ground, pieces of metal roofing were scattered in brush land and pine trees had been uprooted or were snapped off halfway up their straight trunks.

The president met with Gov. Rick Scott to survey the devastation.

Scott said he's gotten everything he’s asked for from the Federal Emergency Management Agency and has spoken with Trump "almost every day."

Trump tweeted before leaving the White House that he would meet with law enforcement and government officials involved in the massive recovery effort. He said "maximum effort is taking place, everyone is working very hard. Worst hit in 50 years!"

At least 18 people are dead and officials expect that number to go up again.

Officials say FEMA and the Red Cross are working to make sure those affected get the help they need.

Many people across the Panhandle are struggling to meet some of their basic needs.

One mother in Callaway, just northeast of Panama City, says she and her children have not a hot meal since the storm hit.

However, she was able to finally get food for her family and some ice thanks to a Salvation Army serving station set up at a Walmart parking lot.

"We're doing the best with what we have, and we thank the Lord for that," said Debra Zahara.

However, more help for storm victims is coming from various parts of the state, such as Central Florida

Orange County Sheriff's Office (OCSO) deputies are hard at work assisting people in the northwest part of the state.

The Sheriff's Office also tweeted that two deputies helped rescue an elderly woman who was trapped in her home.

The Orange County deputies have been in the Panhandle since Thursday.

St. Pete Duke Energy employees found a lost dog in Port St. Joe, however, the furry pal was reunited with her human family.

One of our Duke Energy employees from St Pete found a lost dog in Port St Joe. After trying unsuccessfully to locate its owner, she placed it with the Humane Society. The power of social media reunited this family. I love ❤️ happy endings!! pic.twitter.com/kJJtDj1m9X

State and federal officials continue to crisscross the Panhandle and surveying the damage.

On Sunday, Scott and FEMA Director Brock Long stopped in Mexico Beach to speak with first responders and comforted residents whose homes were damaged or destroyed.

As @FLGovScott & @FEMA_Brock meet this evening in Tallahassee, some hardy folks in Panama City (where patience is wearing noticeably thin) have a message for them: send a lot more help, now. #HurricaneMichael pic.twitter.com/YLZWwn5FRr

Airmen are still not being allowed back onto the base while officials sort things out.

U.S. Sen. Marco Rubio will also visit the Panhandle Monday to see what needs to be done in more rural inland areas.

While appearing on CNN's State of the Union, he said those counties need the same attention as coastal areas.

"They have no phones. Their communication has been cut off. They might even live on a dirt road. The dire need is there and they'll be the hardest people to identify and find. We still don't have an accurate assessment of how many people we have cut off from everybody else," said Rubio.

In Mexico Beach, federal officials say the damage is some of the worst they have ever seen, with homes ripped apart and people's belongings destroyed.

So far, authorities say only one person was killed in Mexico Beach, but the death toll from Hurricane Michael's path is at 18 from Florida to Virginia and authorities are still searching for about 30 people in the Panhandle.

In the meantime, donation drives, like the one the Rays did Monday in St. Pete, are going on all across the Sunshine State, giving people a way to help their fellow Floridians.

- The Associated Press contributed to this story.