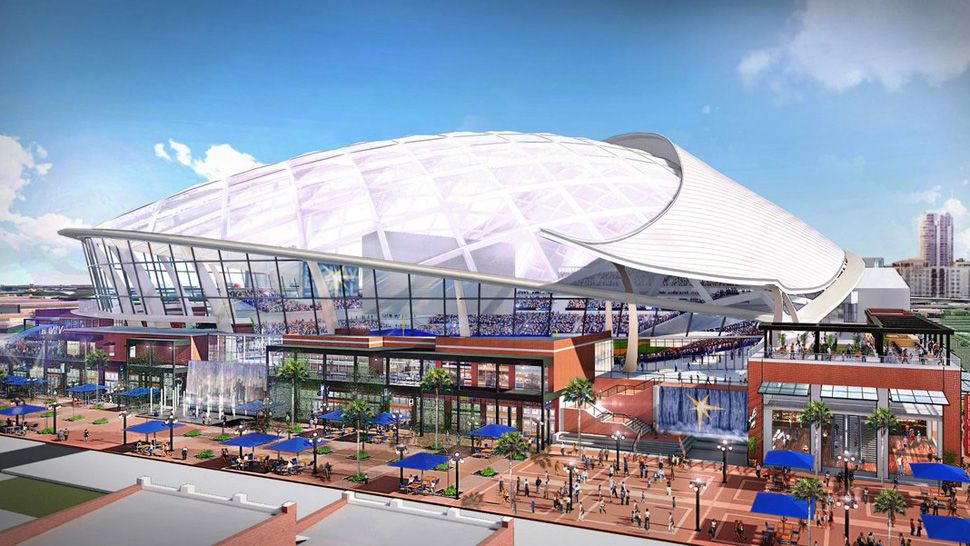 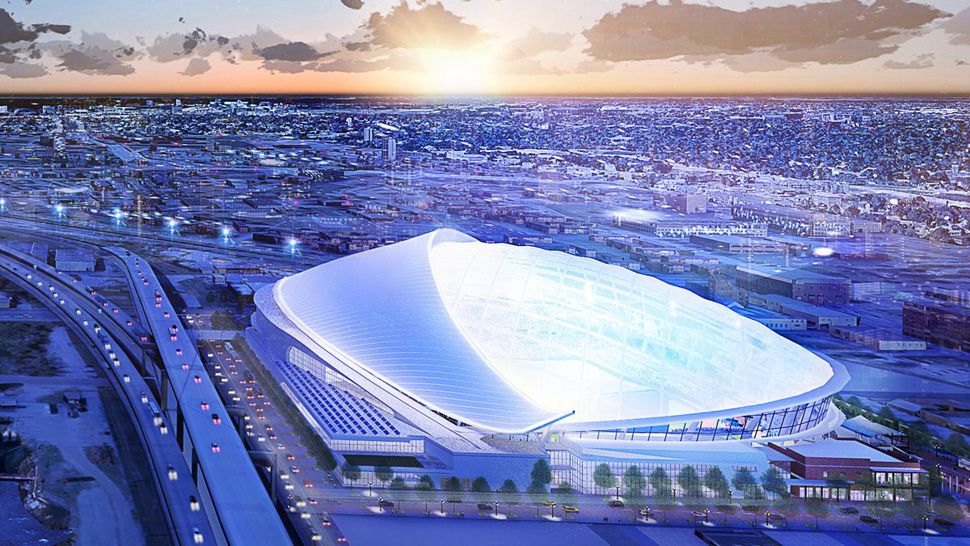 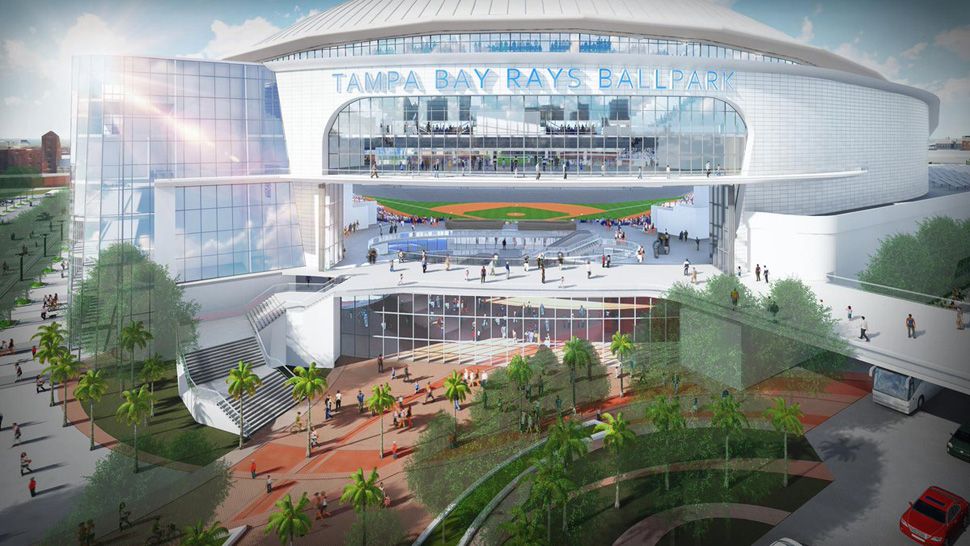 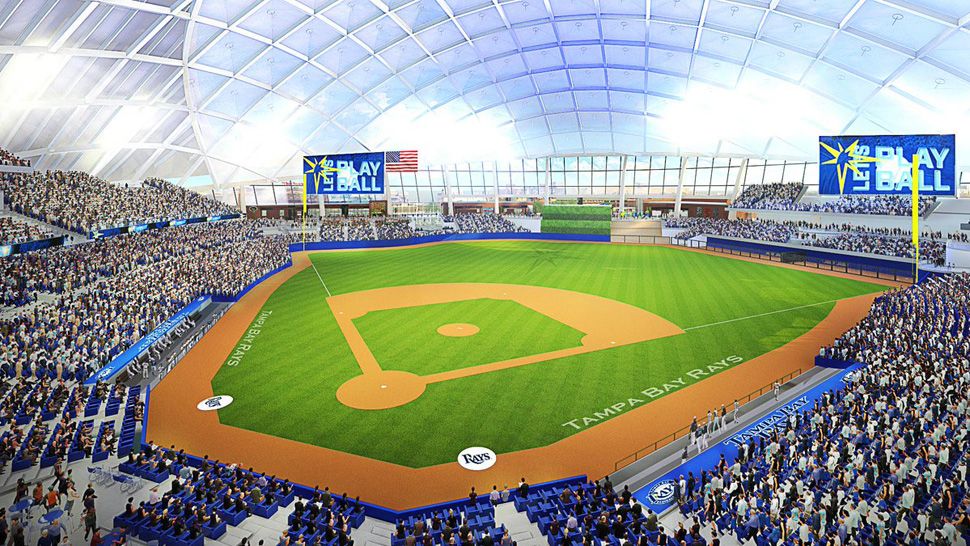 TAMPA, Fla. -- The Tampa Bay Rays unveiled renderings for a new "neighborhood ballpark" to be situated in Ybor City featuring a design meant to "bring the outside inside" while still being cost effective and comfortable for Florida baseball.

Among the most surprising revelations announced by Rays team officials and architectural firm Populous Tuesday was that the proposed facility would not have a retractable roof similar to the one utilized by Marlins Park in Miami.

Instead, the ballpark would have a "fixed, translucent" roof to "ensure comfortable temperatures and game certainty."

According to Rays officials and facility designers, the new facility is not considered a "stadium," but instead a "neighborhood ballpark" with an intimate feel.
In addition to the translucent roof, the facility would feature sliding glass exterior walls beyond center field and behind home plate to offer "stunning views of Tampa, Channelside and Ybor City, as well as cross breeze in pleasant weather," according to a team press release.
Reflective of that design mandate, the stadium will have a fixed seating capacity of 28,216, expandable to 30,842, making it the smallest venue in Major League Baseball to date.

The projected cost for the stadium announced by Rays officials stands at $809 million. With upgrades and surrounding infrastructure improvements, the cost is estimated to increase to $892 million.

Team officials also sought to portray the new facility as a year-round asset to the community, with potential for area events and corporate partnerships.
“I speak for the whole Rays organization and the 20 years we’ve had here today that we expect to be here for generations to come. We believe that baseball can not only survive but thrive in Tampa, in Tampa Bay and the Tampa Bay region,” said Rays Principal Owner Stuart Sternberg.
Local reaction
People in Ybor City we spoke to about the renderings had one word for them, over and over.
"Beautiful," said fan Sydney Buffalo. "I think the concept is beautiful."
"Oh, I think it's beautiful," said fan Charles Mitchell. "I think the stadium is beautiful."
Signs of the community's enthusiasm for the move dotted the main drag in Ybor Tuesday. They even gave the area a new nickname, "Raybor City," in hopes the local flavor here will soon include baseball.
"What we want everyone to focus on is that we have elected officials, community members, business leaders all very intent on figuring out a way for this to happen," said Rays President Brian Auld. "And the organization and our owners certainly feel the same way, so we're optimistic."
Fans who were enthusiastic about the move pointed out it could be a "home run" in Ybor, especially considering the area already has so many bars and restaurants nearby.
"I think it's fabulous, especially the location with everything that's happening in this area, it's exciting," said Rays fan Ken Kvalagim.
Still, questions remained about parking for the stadium and, of course, who would paying for the cost of the project. Speculation is it will take a "team" effort from the Rays, the public, government officials and corporate leaders.
"I don't know whether the city has the money," Buffalo said. "I don't know whether or not we can even afford it or not, but the challenge of it is going to be interesting. I think it's going to be interesting."
Hillsborough County Commissioner Ken Hagan, a longtime point man on the Rays stadium issue, said earlier this year the team prefers a 14-acre site in Ybor City close to the Channelside area for its new home. The mostly industrial area houses multiple warehouses.

The team followed with their own announcement favoring the Ybor site.

An advocacy group Rays2020 has been drumming up support for the move from the corporate community. According to the non-profit group, as many as 100 Bay area business are ready to back the team with their wallets.

The team ideally would like to be throwing out the first pitch in the new stadium by 2023.