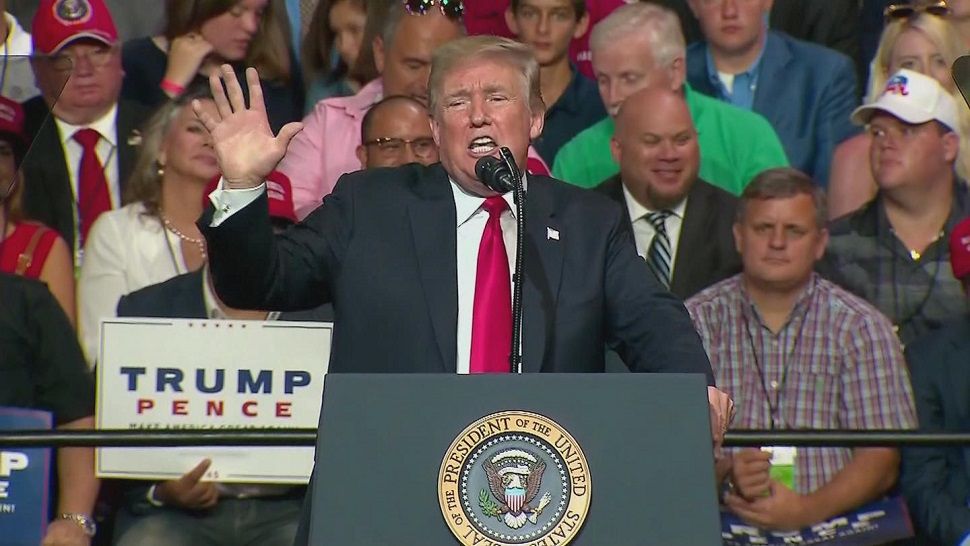 TAMPA, Fla. -- President Donald Trump is back in Washington Wednesday morning following a rally in Tampa on Tuesday.

The president spoke at a massive rally at the Florida State Fairgrounds in support of GOP Florida gubernatorial candidate Ron DeSantis.

"My great friend, a tough, brilliant cookie. It's true. He's tough, he's smart and he loves Florida, he's loves our country, and he's going to be your next governor, Ron DeSantis," Trump said Tuesday night at the rally.

Just a few months ago, DeSantis was way behind in the polls, but is now enjoying a lead, and in some polls, is leading over opponent and current AG Commissioner Adam Putnam.

President Trump also used Democrat push back on his supreme court pick Brett Kavanaugh as a rally cry to get Republicans to the polls. He issued a vialed threat about a government shutdown unless congress acts to fully fund a boarder wall. And he also endorsed Governor Rick Scott for Senate.

However, the biggest talker of the night was the president's gaffe as he pushed for tougher voter ID laws, claiming you even need ID to buy groceries.

Clearly that was a misspeak, but Democrats say it shows how out of touch the president is with real Americans.

There is no word yet if the President will travel back to Florida in advance of the primary, but chances are good though that he will be back to campaign in advance of the midterms, with the important Senate election up for grabs between Governor Rick Scott and incumbent Bill Nelson.