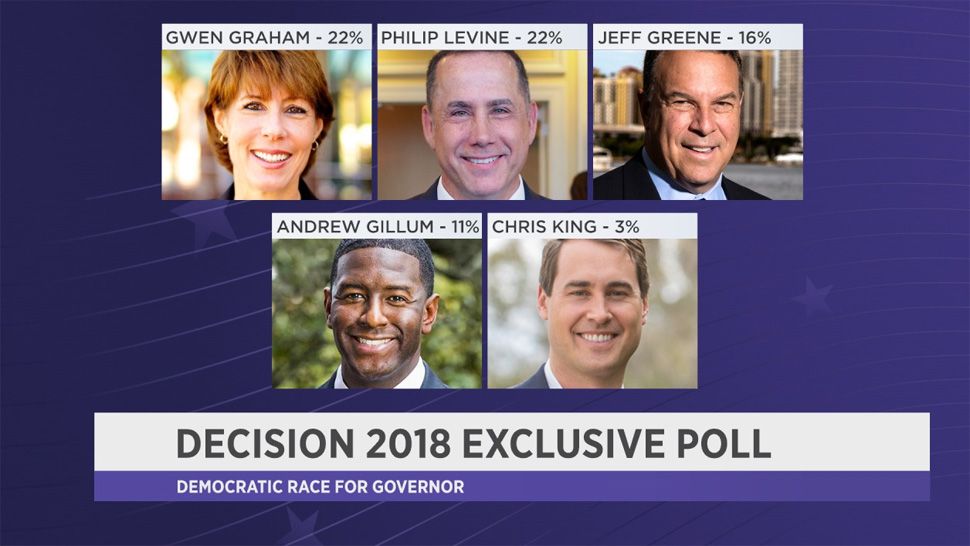 POLL: Graham, Levine tied for lead ahead of Democratic candidates

ST. PETERSBURG, Fla. — With primary day just two weeks away and early voting already under way, it's still unclear who will prevail in the Democratic primary for Governor. What is clear, however, is that many democratic voters have yet to decide who they will support.

In our exclusive poll, we asked "If the Democratic primary for Governor were today and you were filling out your ballot, which Democrat would you vote for?"

Gwen Graham and Philip Levine tied. Each garnered 22 percent of votes. In third place was Jeff Greene with 16 percent.

For Levine, 23 percent of females voted for him and 19 percent of males.

For Graham, 24 percent of females voted for her with 19 percent of males.

“Historically we’ve seen that when women vote, women win. And that’s why I feel that the female undecided [voters] will trend toward Gwen Graham," said political analyst Ana Cruz.

Of the 631 registered democratic voters polled, 24 percent were undecided.

When it came to ideology, Levine won 26 percent of votes among conservative democrats, while Graham won 12 percent.

“That’s interesting to me and I’m not sure why that is because both Gwen Graham and Levine are pretty much touching upon the same issue," said Cruz.

“I would have thought liberals would have preferred Levine but they also might like that they Graham maybe has a better chance of winning," said Pinellas County democratic voter April Thanos.

By voter approval of President Trump: