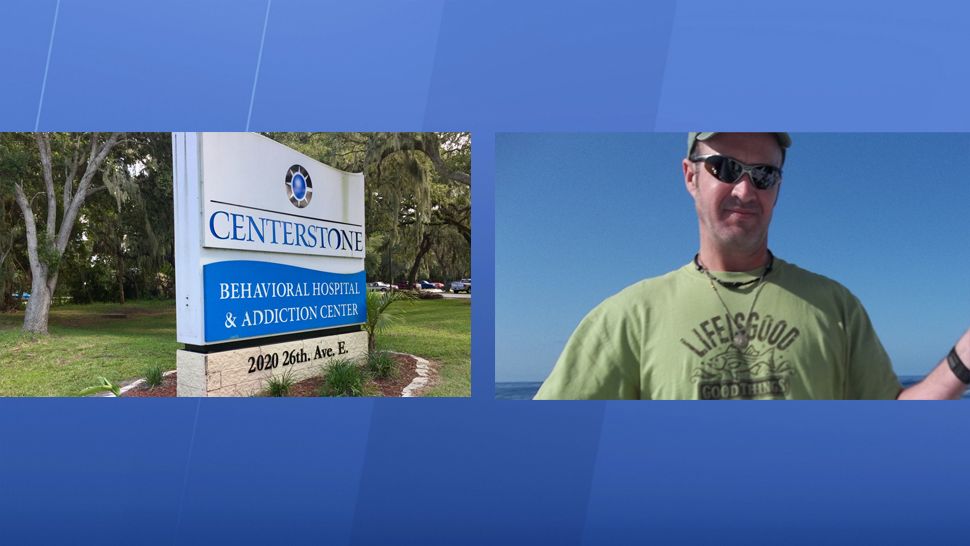 Left: sign outside the Cornerstone Behavioral Hospital and Addiction Center in Bradenton; Right: Duane Riddick, who checked himself into the Cornerstone facility on March 29 and was found dead there April 3. (Photos: left: Josh Rojas, staff; right: Swope, Rodante P.A.)

BRADENTON, Fla. — A family filed a wrongful death lawsuit on Monday against Centerstone in Bradenton for failing to follow protocol that should’ve prevented Duane Riddick, 49, from taking his own life, according to their attorney Mindy Miller.

"The level of negligence at Centerstone, his treatment level there, was worse than anything I have ever seen,” said Miller. "There's just no good reason why he's not sitting here living a full life today."

According to the lawsuit, Riddick voluntarily checked himself into the mental health facility on March 29 and was placed on a suicide prevention watch. The protocol at Centerstone called for staff to check on Riddick every 15 minutes.

However, surveillance video shows that he was left alone in his room, with the door closed, for about 9 hours. During that time, Riddick took his own life and was found dead on April 3.

"It was very clear on surveillance that Mr. Riddick was observed at 9:30 at night. He was given his medication,” Miller said. “Then, not a single staff person, not a single member or employee of Centerstone, looked in on him again until 7:30 the next morning."

“We are sorry for the Riddick family’s loss. Our organization is driven to deliver care that changes people’s lives.

The death of any patient is devastating and prompts an investigation of how we can prevent such tragedies in the future. We evaluate our policies and procedures, exploring challenges as they arise, examining potential gaps, and taking measures to improve how we operate.

Out of respect for patient privacy and because there is litigation ongoing, we cannot discuss this matter further.”

Miller said this was the first time Riddick suffered from a mental breakdown. It was apparently triggered by a bad breakup with his girlfriend and some issues at work.

“The saddest thing about this case is that research shows that when someone like Mr. Riddick… has a moment in their life where they have a bad time and they seek hospitalization for suicide prevention, the research shows that if they can get through that, they go on to lead a healthy, long life," Miller said.

The attorney said Riddick’s mom, Anna, 78, hopes the lawsuit will result in changes to how facilities such as Centerstone are held accountable.

"Mrs. Riddick is devastated,” said Miller. "She is proceeding with this litigation to effect change. As any mamma would, she does not want to see this happen unnecessarily to anyone."