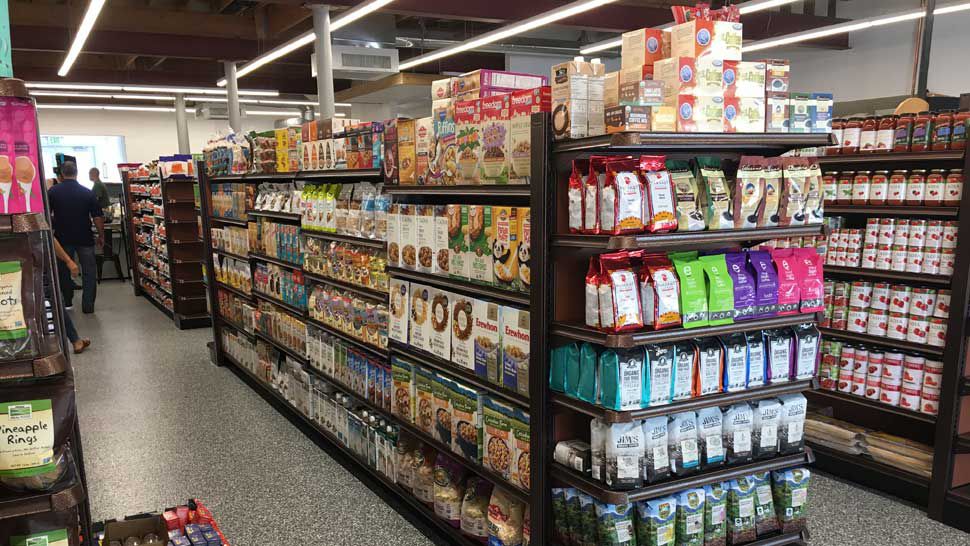 NEW PORT RICHEY, Fla. — Downtown New Port Richey will soon have a new supermarket in place, one that hopes it can fill a fresh-food void that currently exists in the area.

Through the large front windows at 5800 Main Street, you can see it. Aisles of shelves stocked with coffee, pasta sauce, and flour.

It’s easy to see why a passerby wandered in through the unlocked doors on a recent Monday, checking to see if he could make a purchase.

“We actually have a lot of people who’ve been knocking on the windows, asking if we’re open yet,” said Jeff Wright.

Wright is co-owner of Wright’s Natural Market. He and his wife, Kathy Wright, have run the store for nearly 25 years.

According to him, talks to move from their U.S. 19 location to downtown have been in the works for more than six years.

“It’s not as friendly as it used to be,” Wright said of U.S. 19. “So, we really feel that the walkability and what’s going on in downtown New Port Richey really fits our vibe and what we’re looking for.”

The 3,600 sq. ft. space will be home to the 500 new items Wright’s has added to its existing roster of products. Marketing Director Lia Gallegos said it’s all carefully vetted by the owners.

Wright said the produce section will be four times larger than the previous location’s.

“Our goal is to provide that, be a source of that,” said Wright.

Helping people in a "food desert"

People who live near downtown said finding a place to buy fresh food nearby has been a challenge in the past.

“It’s hard. We don’t have transportation, so it’s a blessing that a grocery store is opening on Main Street,” said Christopher Marino.

Marino said he works on Main St. and lives just two blocks away, and grocery shopping for him has meant having to call a ride.

“We don’t have to…take an Uber to the store anymore,” he said of having a store downtown.

According to the USDA’s Food Desert Locator interactive online map, the new Wright’s location is in a low-income census tract where a significant share of residents lives half a mile or more from the nearest supermarket.

Just blocks away is another low-income tract. The map shows that this second area is also home to people who live at least half a mile from a store, but where at least 100 households also do not have access to a vehicle.

“For people who have limited mobility, they may be in scooters or not be able to walk very far, not have access to cars or transportation, it’s extremely difficult,” said Gallegos.

Wright said another goal of the store is to educate the community about how to grow their own food to supplement what they buy at the store.

Wright’s Natural Market is expected to open later this month.