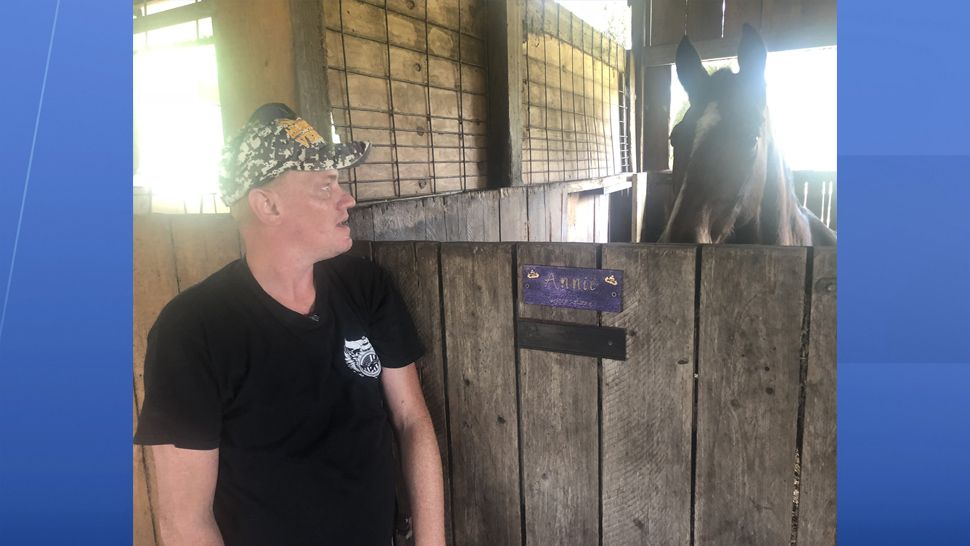 Air Force veteran Thomas Alajko is one of the participants in the Serenity Saviors program at Serenity Stables in Spring Hill. (Sarah Blazonis/Spectrum Bay News 9)

Serenity Stables Saving Horses and Humans: 'We Save Two'

SPRING HILL, Fla. – For two and a half years, the non-profit Serenity Saviors has been working to save horses headed for the slaughterhouse and help veterans and children struggling with a range of issues.

The program started when Allen and Cherina Bornscheuer, owners of Serenity Stables in north Pasco County, began rescuing horses in kill pens that were headed to slaughterhouses in Canada and Mexico.

“The Island of Misfit Toys – that’s kind of what we are a little bit,” said Allen Bornscheuer of his stables. “These horses are the discards.”

The Bornscheuers take them in, rehab them, and try to adopt them out. Those that aren’t adopted become therapy horses.

“I think horses have a special power that other animals don’t have. I can’t explain that fully. I can only try to understand it,” said Allen Bornscheuer. “We save the horse, we save the human – we save two.”

Cherina Bornscheuer is a clinical psychologist. She said the first step in the Saviors program is matching the right human with the right animal.

“They choose the one they have the best connection with,” Cherina Bornscheuer said. “So, we go through, we introduce them to every single horse, donkey, goat, and dog here.”

Then participants learn the basics of care.

“That gets kind of the juices flowing usually, and then I just start motivational interviewing and other counseling techniques to get them to open up and tell me about, you know, why they’re here, what’s been on their mind, what they can’t get out of their mind,” said Cherina Bornscheuer.

Air Force veteran Thomas Alajko said for him, it can be easier to open up to the horses themselves than to another human.

“Most people don’t actually listen. They hear, but they don’t listen,” said Alajko, who suffers from PTSD and depression.

While some who come to the Saviors program ride the horses, that’s not a requirement. Alajko has a knee and back injury from his time in the military. He said he typically walks and grooms the horses, but can also talk to them for hours.

“Whenever I start getting depressed, I’ll come out here,” Alajko said. “It helps me to get out my problems.”

The Bornscheuers said children who take part in the program may be on the autism spectrum or suffering from anything from anxiety to ADD or ADHD.

“The ones who are on the spectrum and ADD/ADHD, you won’t believe how well they focus when they’re brushing a horse or sitting on a horse or walking a horse,” said Cherina Bornscheuer. “Their attention just zones in.”

The therapy services are free to veterans and offered at a reduced rate for children.

Allen Bornscheuer said the program has rescued more than 225 horses so far. He said it costs upwards of $1,000 to bail them out of kill pens. That and the added cost of rehab, transportation, and vet bills are paid for entirely through donations.