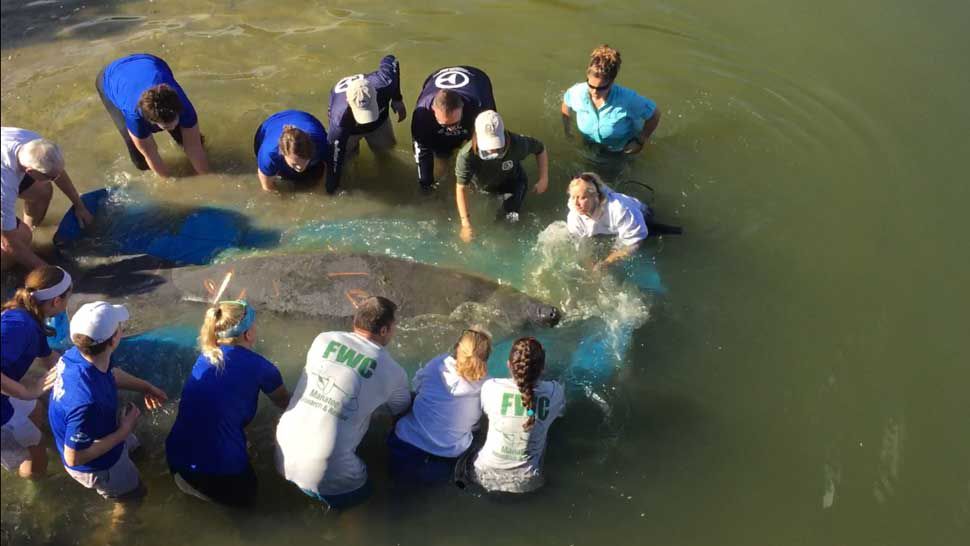 “Every individual makes a difference to the population,” said Andy Garrett, FWC’s Manatee Rescue Coordinator. “We make every effort to try to catch the animals that are in need, get them rehabbed and get them back out.”

Garrett said the two adult males and one female manatee were rescued from Sarasota County in September and rehabbed at SeaWorld in Orlando. So far this year, FWC records show that red tide has killed 41 manatees in Sarasota County and a total of 207 statewide.

The good news is red tide hasn’t killed any manatees yet this month. The release could be another sign the region is recovering from the toxic algae.

“The cell counts are definitely down. It seems like things have subsided to some degree,” said Garrett. “Of course, we’re very vigilant and cautious that, that can always pick up again but we’re kind of able to at least exhale a little bit right now.”

A large crowd gathered at TECO’s manatee viewing center to watch the release. A Lakeland mom, Sarah Swartz, said they just happened to be there at the right time.

“I thought it was pretty cool. We’ve been over here a couple of times,” she said. “We just came over for a home school field trip and we didn’t even know that was happening, so it was quite a treat for us.”

Biologists marked the scars on the manatees and took photos before releasing the animals. Garrett said that’s how they know the Sarasota manatees belong in the Tampa Bay waters for the winter.

“This time of year, manatees are going to their warm water locations and for Sarasota, a lot of the animals come up here to Apollo Beach, to stay warm,” he said. “So, we knew through some of our photo I.D. work with their scar patterns that some of these animals we’re releasing today know this site.”

Garrett said watching the three rehabbed manatees join hundreds of others in Apollo Beach helps to boost morale for the rescue team members.

“It’s a great day. The releases are always a good day for the rescue teams, the rehab teams,” he said. “It’s a great partnership… FWC would rescue them, Clearwater (Marine) Aquarium would transport in their vehicles to SeaWorld.”

FWC also released their second statewide manatee population survey report on Tuesday. The results from that 2015-2016 manatee abundance survey show there’s about 2,000 more manatees than were counted during the 2011-2012 survey.

The latest survey estimates the number of manatees statewide are between 7,520–10,280. The numbers from the previous survey pegged the population at between 5,680–8,110.

According to FWC, the exciting news contributes to the conclusion that conservation measures implemented by the FWC and its partners continue to create an environment that allows the manatee population to recover.