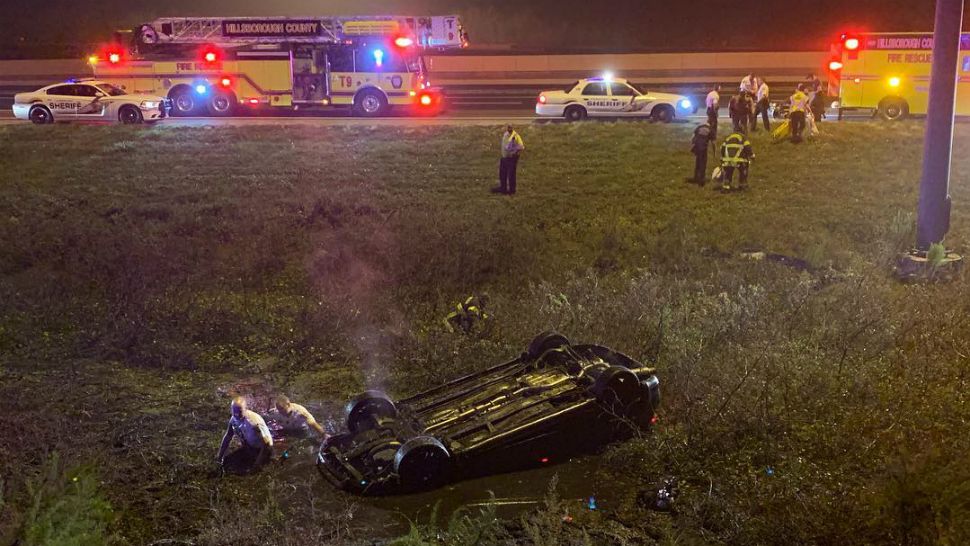 HILLSBOROUGH COUNTY, Fla. — Hillsborough County authorities released on Wednesday the 911 call made by a young woman who was stuck upside down in a car filling up with water early New Year's Day.

Amanda Antonio, 20, said she was driving east on I-4 about 4 a.m. when another driver cut her off. She lost control of the car, flipped several times and landed in a ditch full of mud and water.

Antonio said she used her Apple Watch to search for her phone and call 911.

The call started with her saying "Hi, I've been in a car accident. My car is flipped and I can't see anything and there's water getting in the car. I can't get out."

The dispatcher asked her how high the water was.

"I know, I'm here with you," the dispatcher said several times.

The dispatcher can later be heard assuring Antonio that help is on the way.

"Are they close?" she said. "The water is coming in so fast."

Listening to the call at her family's home a day later, Antonio said she only remembers bits and pieces of the conversation.

"I don't really remember it. I feel like when I was in the car I was in a bad dream," she said.

Once deputies arrived, Antonio started screaming to help them find her.

Deputies located her and pulled her out of the water to safety.

On Thursday morning, she and her family will be meeting with the dispatcher and the rescuers to thank them.

"Because without them, I wouldn't be here right now," she said. "I met many angels that night. The dispatcher being the first one, then came everyone else."