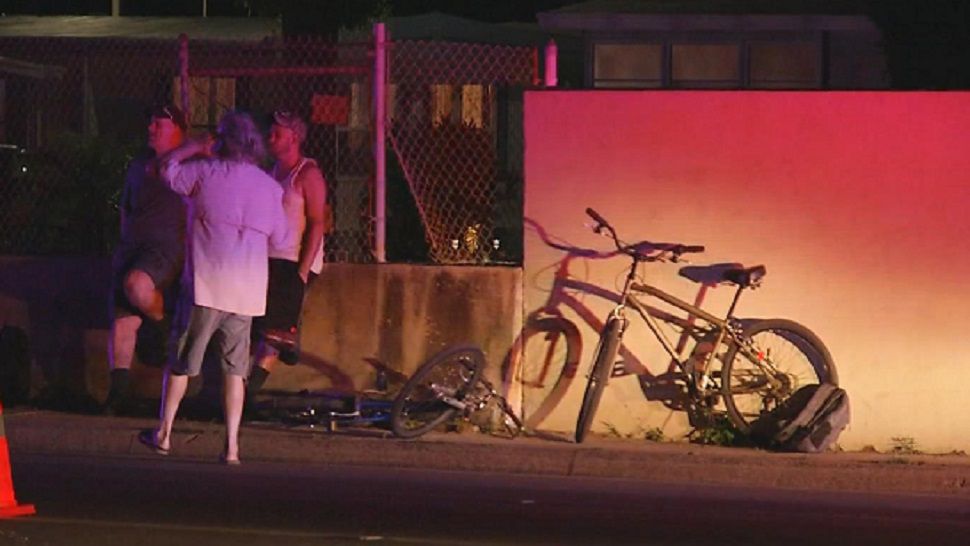 Four bicyclists were hurt Monday evening when the lift gate of a tractor-trailer headed eastbound on Ridge Road fell off, hitting the cyclists on the sidewalk. (Spectrum News)

According to the agency, the bicyclists were struck by the lift gate of a truck ahead of them that dislodged and fell open on Ridge Road.

The driver of the vehicle initially kept driving, but Port Richey Police later caught up with him.

All four bicyclists were transported to Bayonet Point Hospital, three as trauma alerts.

The crash happened just before 7:30 p.m. when a Florida Cancer Specialists tractor-trailer was headed eastbound on Ridge Road when the gate fell, hitting the cyclists on the sidewalk.

Authorities said there were seven people on bicycles total, but three riders avoided getting hit by the gate.

"It’s not every day you (have) a vehicle crash with that many people at one time," Port Richey Police Capt. Michael Koch said. "And from a projecting object from a vehicle, it’s just fortunate we don’t have more people injured with the number present."

"After we ran the procedure, we asked, ‘Are you sure you locked it?’" DeCanio explained. "He just got very withdrawn and said “No I didn’t. I didn’t lock it.’”

The truck driver also allegedly didn’t stop right after the crash. He told police he stopped a few blocks later to fix the lift, but didn’t realize anyone had been hit.

The same mobile scanning truck in the crash was in use again today.

In a statement, Florida Cancer Specialists said, “We are concerned and deeply saddened by this accident. Those who were affected, their families and friends are in our thoughts and prayers, as we await the full investigation by authorities.”

Police say they aren’t pursuing any charges against the driver at this time but the investigation continues.

So far, the driver is not facing any charges. The investigation is ongoing.