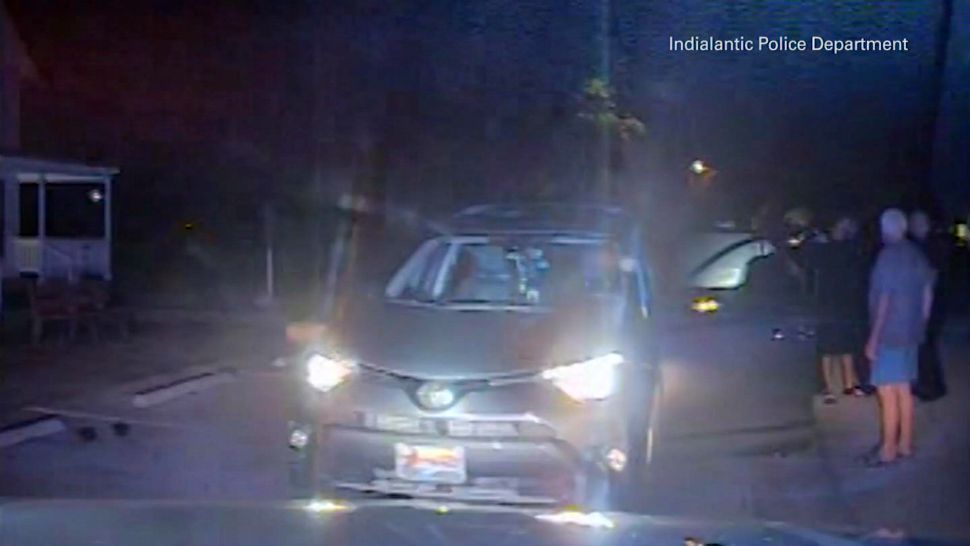 Police caught up with a fleeing motorist when the man called a Lyft after his car got a flat, authorities in Indialantic, Florida say. (Indialantic Police)

INDIALANTIC, Fla. — The occupants of a car who led police on a pursuit through two Brevard County jurisdictions, barreling through yards, called a Lyft when his car broke down, police say.

JanCarlos Torres of Orlando was arrested early Tuesday on charges including aggravated fleeing from police, reckless driving, and driving without a license.

The pursuit started in Indialantic, when a police officer said he spotted a Toyota sedan speeding on State Road 500.

When the car turned onto a dead-end street, the officer tried to conduct a traffic stop, and that's when the car's driver came straight at the officer's cruiser as it fled, an arrest affidavit says.

The Toyota sped through yards and ignored stop signs at "extremely high speeds through a residential neighborhood," the Indialantic Police officer wrote in the report.

A short time later, Melbourne Beach Police found the Toyota at Ryckman Park, about a mile away. That's when police say the passenger did something out of the ordinary: The Toyota had a flat tire, so they ordered a Lyft.

When the Lyft driver arrived, the Toyota's driver "exited from the shadows," the Indialantic officer said, and he was arrested.

"It is a little odd. I don't think I would have thought of doing that. But I'll give it to them for ingenuity, in an attempt to get out of the area," Assistant Indialantic Police Chief Mike Connor said.

Police said Torres' girlfriend was the Toyota's passenger. She is not facing charges, but the car belongs to her mother, they said.