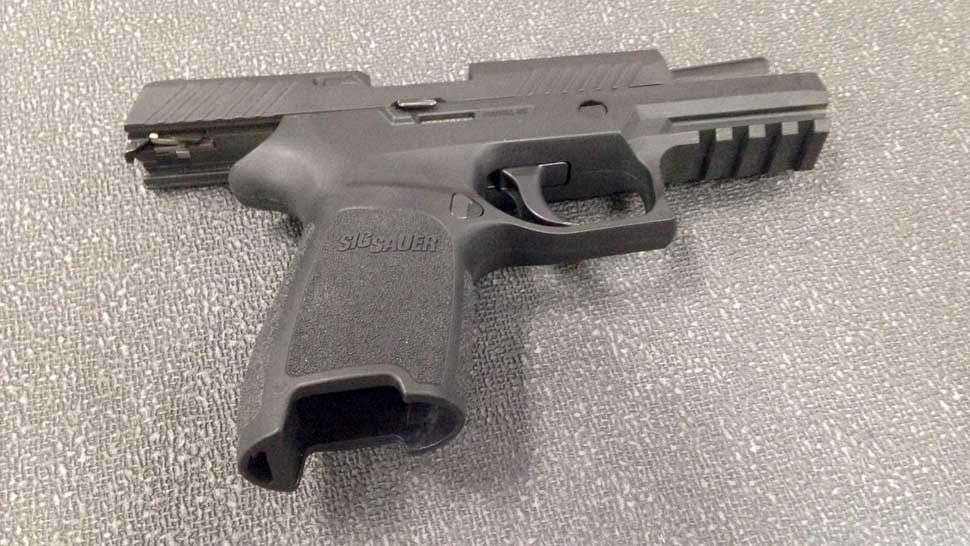 The weapon in question — a Sig Sauer 9mm P320 — is standard issue to all deputies in the Pasco County Sheriff's Office. (Josh Rojas/Spectrum Bay News 9)

PASCO COUNTY, Fla. — The make and model of the gun that Pasco County deputies said fired by itself while holstered after it bumped into a middle school cafeteria wall on Tuesday has a troubled history, according to an investigation by our partners at CNN.

Pasco Sheriff’s Office spokeswoman Amanda Hunter said the school resource officer at Weightman Middle School in Wesley Chapel where the incident occurred had the same gun issued to all members in the agency: a Sig Sauer 9MM P320.

According to CNN, the U.S. Army found a problem with a nearly identical gun during testing in 2016: The weapon would discharge by itself if dropped at a certain angle. Sig Sauer provided a repair for the military at least four months before launching the same fix for the civilian market.

During the past few years, at least nine people have had their P320 pistols discharge when dropped or jostled. Three of those people are police officers who suffered gunshot injuries, according to CNN.

Sig Sauer announced a “voluntary upgrade” program for P320 owners in August 2017. The fix was to make the trigger lighter.

Hunter said the school officer’s P320 went through that voluntary upgrade program and was returned to the agency in October 2018. It was holstered in a Safariland 6360 triple retention duty holster.

The Pasco Sheriff’s Office is investigating what exactly caused the gun to fire without the trigger being pulled.

“We have expert armorers who are going to break that weapon down, take a look at it to find out what happened to cause that weapon to discharge," Lt. Troy Ferguson said.

Mark Rutan, a gun sales associate at Bill Jackson’s in Pinellas Park, said the results of that Pasco investigation will be watched closely for answers.

“You’re dealing with thousands of thousands of people that are operating them,” he said. “There’s going to be instances, and until it’s investigated and more information is out there, we just don’t know.”

“SIG SAUER is aware of an incident involving the discharge of a firearm by a School Resource Officer in Pasco County, Florida. While we cannot comment on the specifics of the incident, it is our understanding that this was a negligent discharge, rather than an accidental discharge as some media outlets have reported. SIG SAUER understands, and respects that the Pasco County Sherriff’s Department is conducting a complete and thorough investigation into this incident, and we trust those findings will be reported as soon as possible.”