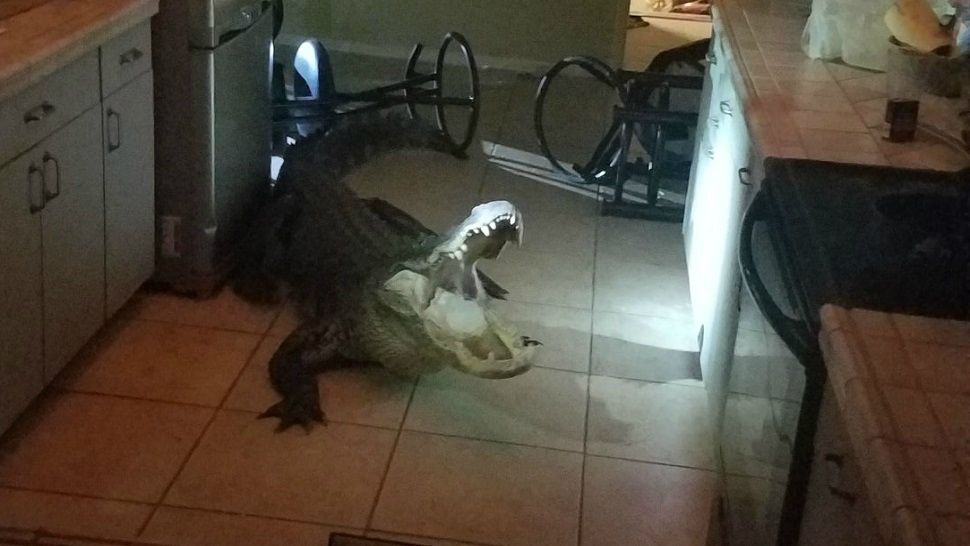 A house-sitting neighbor was checking on a Clearwater home when she found a break-in suspect in the kitchen: an 11-foot alligator. (Clearwater Police)

CLEARWATER, Fla. — A late-night intruder prompted a 911 call from a woman watching her neighbor's house. But this was no ordinary burglar.

Clearwater Police responded to a home in the 3100 block of Eagles Landing Circle West early Friday to reports of a break-in. The issue was the suspect was an 11-foot alligator — and apparently not in the best of moods.

Mary Wischhusen woke up to a big crash in her kitchen at 3:30 a.m. Friday morning. When she went to go investigate, she came face-to-face with the scaly trespasser.

“I had this beautiful face staring at me as though he belonged there,” Wischhusen recalled.

Officers said the gator apparently broke through a window and crawled into the home.

According to Wischhusen, the gator appeared calm.

“[He was] just laying there. It’s like he made it all the way through the kitchen and he thought he was so smart,” she said.

The 77-year old scurried back into her bedroom, shut the door, called 911, and hoped for the best.

“I was hyperventilating a little, so what I did was go on the computer and play games to settle down,” she said.

Before the "break-in," Patricia Pecora was delivering newspapers when she spotted the gator trying to go into a sewer.

“He couldn’t fit. He was too huge,” Pecora said. “So then that’s when he started showing more aggression and he started thwarting his tail around.”

It seemed to put him in a snappy mood and he darted towards Wischhusen’s house. A few minutes later, Pecora heard a loud crash.

“It sounded like something had fallen and busted. That’s when I said, ‘I’m calling 911, because that sound, that’s not a normal sound,” she said.

Maybe the wine knocked him out, because when the trappers finally got him, he was very relaxed.

At that point, it was Wischhusen’s time to say see you later, alligator.

“I’m grateful he didn’t come to my bedroom and chase the door down and I’m grateful for all the people who helped me,” she said.

Though her house was damaged, she’s choosing to look on the bright side.

When asked if she would move the rest of her wine in order to not attract any more gators, Wischhusen just laughed.

“Why would I change my living habits for that?” she retorted. “'Cause the next gator might like white wine.”

The alligator will be taken to a private location to rest and recover from what the trapper described as a traumatic experience.

If the gator is found to be a good candidate for relocation, he will be taken to a private alligator farm in Fort Meade.

Clearwater PD: An unwanted overnight visitor had to be removed from a home on Eagles Landing. 11-foot gator broke into home through some low windows in kitchen. Homeowner called police and trapper also responded to scene. The gator was captured and there were no injuries. pic.twitter.com/GTTiqERhZH