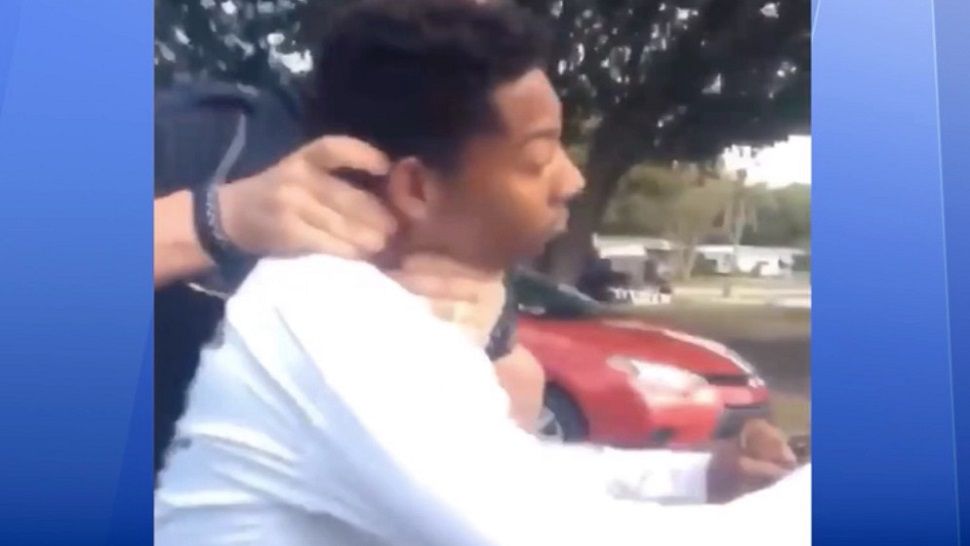 Largo Police fired officer Brian Livernois on Tuesday for putting his hands around a teen’s neck during an incident that happened back in April and was caught on cell phone video, according to internal affairs report. (Courtesy Ann Arnold)

Largo Police Officer Fired After Being Accused Of Roughing Up Teen

LARGO, Fla. — Largo Police fired officer Brian Livernois on Tuesday for putting his hands around a teen’s neck during an incident that happened back in April and was caught on cell phone video, according to internal affairs report.

"I think more should've been done besides him firing,” she said. “I feel like he should've been charged because if my son would've hit him, he (Tullis) would've got charged with a battery."

According to internal affairs, the incident began on April 4, at 4:50 p.m., on Melody Lane when officer Livernois was checking out a call from an unidentified couple who said they were threatened by a group of juveniles. The couple told dispatch that a black male wearing a white shirt stated that he was going to shoot someone.

As Livernois drove down the road he spotted Tullis who matched the description of the suspect. Tullis was also was walking with a group of other teens. The officer activated his lights and stepped out of his cruiser to make contact.

On the video, officer Livernois can be heard telling Tullis to put out a cigar that he was smoking. Livernois told investigators he started talking tough with Tullis because he believed the teen wanted to fight him.

"What you want to buck up on me, dude?” said Livernois to Tullis on the video. "Do you got a problem with me?"

"Do you have a problem with me?” asked Tullis.

That’s when the officer can be seen grabbing the teen by his shoulders and shoving him towards the police cruiser. Tullis’ friends can be heard telling the teen not to resist. Livernois then puts his hands around Tullis’ neck for a few seconds before another man tries to pull the officer away.

Livernois told internal affairs that he was using a mandibular jaw pressure point technique and admitted that it’s not authorized in the Largo Police use of force policy, except in cases where aggravated physical resistance is encountered.

Largo Police Chief Jeff Undestad found that officer Livernois violated two policies. The first violation was for bullying, discourtesy or rudeness and using profane language, which carried a 5 day suspension. The second violation was for conducting a prohibited choke hold or neck restraint, which Livernois was terminated for.

"We take great pride in the positive relationship the Largo Police Department has with our community,” said Chief Undestad. “Actions like this are not acceptable and violate the public's trust, which every employee has worked so hard to earn. This situation warranted the former officer's termination."

Livernois worked for the Largo Police Department for about 7 years. Arnold said because of the incident she has sent her son to live out of state with his dad.

“I was in tears because it's like now my son is in fear after this incident,” she said. “Everywhere he goes, he's looking behind his shoulder to see if the police are going to harass him."

Arnold said Tullis was arrested in April for obstruction and they’re still fighting that charge in court.