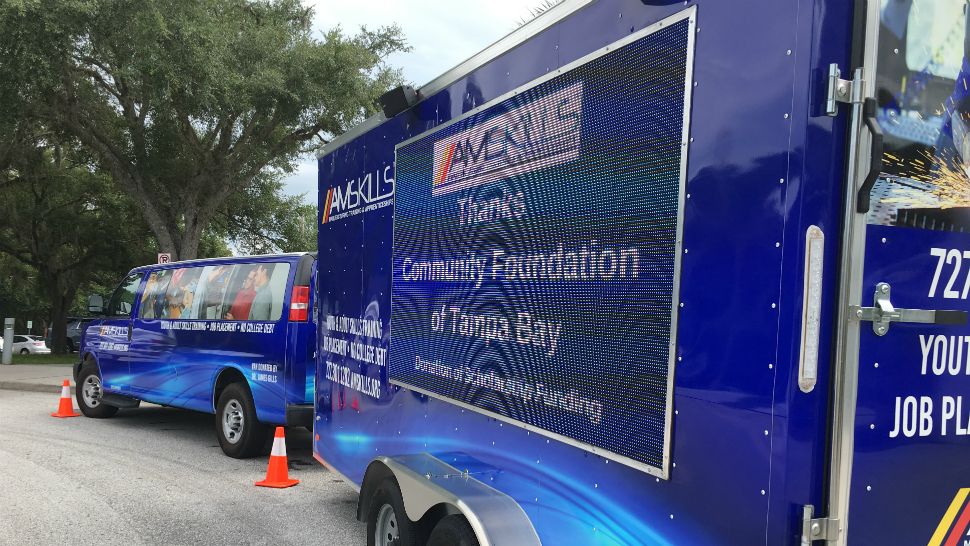 The Mobile Innovation Station and the non-profit said it's a way to recruit people for its training programs by targeting areas with the most need. (Sarah Blazonis/Spectrum Bay News 9)

Opportunity is on Wheels For Pasco County Job Seekers

NEW PORT RICHEY, FL – AmSkills recently rolled out the latest tool in its effort to close the manufacturing skills gap being seen nationwide and here in Tampa Bay.

It’s called the Mobile Innovation Station, and the non-profit said it’s a way to recruit people for its training programs by targeting areas with the most need.

“Manufacturing is very difficult to recruit people for,” said AmSkills Executive Director Tom Mudano. “I talk about welding or electricians, everybody knows what that is. If you say what manufacturing is, you don’t know.

"So basically, the mobile workshop is a creative way to get us out into the community and introduce this industry in innovative and creative ways.”

The new vehicle will be equipped with everything needed to hold workshops on various manufacturing skills.

The station will go to spots like low-income neighborhoods, homeless shelters, and veterans' organizations to give people the chance to try their hand at manufacturing and learn about AmSkills training opportunities.

According to AmSkills, nearly 400 manufacturers currently employ more than 7,000 people in Pasco County. Still, Mudano said employers in the county and elsewhere in the region are feeling the pinch of the skills gap.

A 2018 study from Deloitte and The Manufacturing Institute showed that from 2018-2028, 4.6 million manufacturing jobs are expected to become available nationwide.

While 2.69 million of those were expected to be the result of retirements, another 1.96 million are predicted to come from natural growth in the field.

That same study forecasts 2.4 million of those positions will be left vacant because employers can't find skilled candidates.

“It may actually get people’s attention,” said Alexander Gerwe of the vehicle.

Gerwe is an AmSkills graduate who explained the program to those who came to get their first glimpse at the Mobile Innovation Station June 19.

“We get people showing up, asking different questions, and it’s mostly dealing with the younger generation – looking for jobs, motivation, things like that,” Gerwe said.

You can learn more about AmSkills by visiting www.AmSkills.org or calling (727) 301-1282. Its next Pasco Pre-Apprenticeship Program begins July 8.