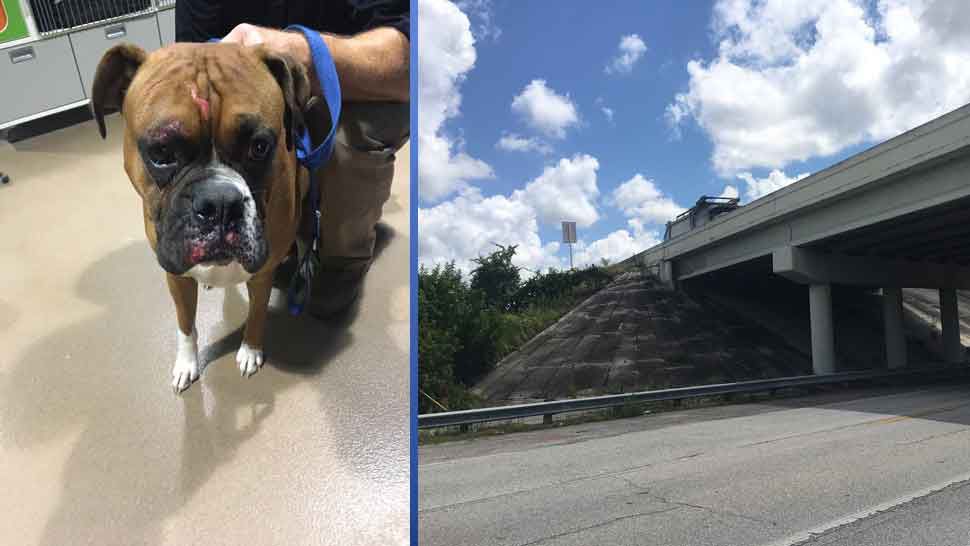 Left: 2-year-old boxer Scooby-Doo miraculously only suffered a few scrapes to his head and snout; Right: The I-75 overpass at Big Bend Road from which Scooby-Doo jumped this morning. (Melissa Eichman/Spectrum Bay News 9)

Dog Miraculously Survives After Jump from I-75 Overpass

HILLSBOROUGH COUNTY, Fla. — A dog jumped from a Bay area I-75 overpass Wednesday morning while his owners were in a car accident, but was later located and returned to his family with only minor injuries.

Sky 9 cameras caught footage Wednesday of the dog, a 2-year-old boxer named "Scooby-Doo," scampering from his owners' car after the crash on I-75 at Big Bend Road and briefly running down the interstate before jumping off the overpass.

"I was amazed that there were no more injuries than that for certain because that was quite a drop," said Hillsborough County Animal Control director Roger Mills. "Because depending on where he landed it could be up to 17, 18 feet, so very fortunate. Scooby Doo is very fortunate."

Scooby-Doo suffered no broken bones from the fall — only some scrapes on his head and snout. He was later found by a county Public Works crew working in the area.

"We tried to find the owner by looking on the street but we couldn’t find anything, so we decided to pick the dog up, give him water and call animal services," said Troy Thomas with Hillsborough County Public Works.

"He's doing great," Mills said. "He's been fed, he's been watered, we've given him some treats."

We spoke to Scooby-Doo's mom while she was making arrangements to pick him up, and she told us she's going to give him a great big hug when she sees him.

"Seeing him here and then seeing where he came from, there's no way I thought he should have made it here, but he was in good spirits," Thomas said.