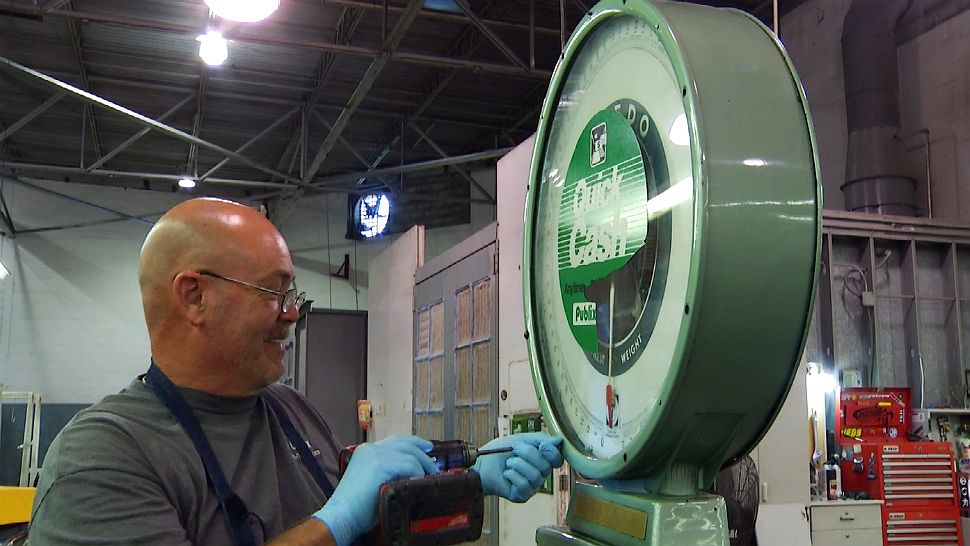 Gene Anderson has been working on the scales for 22 years. He understands the connection that folks have with them. (Rick Elmhorst/Spectrum News)

Publix Carrying on Nearly 80-Year Tradition with Its Scales

LAKELAND, Fla. — Publix is carrying on a nearly 80-year-old tradition. It makes sure there is one of those old-fashioned scales customers can weigh themselves on in every Florida store.

Lots of customers have been weighing themselves since they were little kids.

That’s the case for Sherry Martin. She said she doesn’t have a scale at home but braves the scale in public whenever she gets groceries.

“It just keeps tabs on my weight. Not going too low or too high,” she said.

Martin said she always looks around to see if anyone is looking before she gets on the scale at the Southgate Publix.

How big of a deal is the scale tradition for Publix? There is a shrine of sorts for the first ever Publix scale just outside founder George Jenkins’ historic office at the old Publix headquarters on George Jenkins Boulevard in Lakeland.

The scale was originally in the second-ever Publix store in Winter Haven starting in 1940.

In a warehouse connected to the old headquarters, there is a small team of guys that work on the scales when they break down. The company that made the scales doesn’t make them anymore. So Publix wants to make sure it has enough scales for all its Florida stores.

Gene Anderson has been working on the scales for 22 years. He understands the connection that folks have with them.

“To be honest with you, I think it’s the uniqueness of seeing the needle coming around and guessing where it’s going to stop.” He said. “Most people hope it stops sooner than later.“

Anderson said when he has to go to an actual store to work on a scale, customers like to talk about them.

“You would really be surprised. I’ve been to the stores and had to work on them, and there will be people waiting in line to get on them,” he said.

Publix spokesman Brian West said there are a few of the scales at stores in Georgia. But the company doesn’t plan to expand that to make sure it has enough scales for Florida.