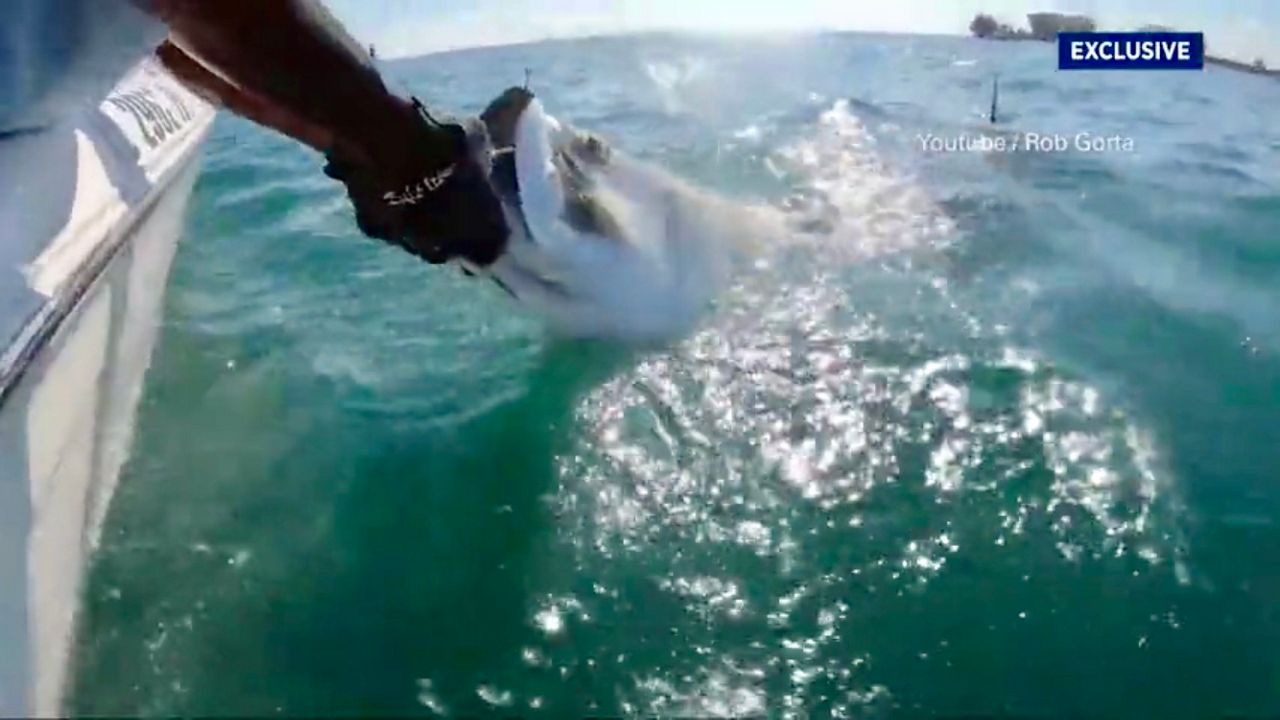 A charter captain caught a giant hammerhead shark on video taking a big tarpon from his hands as he tried to unhook the fish. (Screen grab from Rob Gorta's Youtube video)

MANATEE COUNTY, Fla. — A charter captain caught a giant hammerhead shark on video taking a big tarpon from his hands as he tried to unhook the fish.

“I did not see that 6-foot dorsal fin coming right at me,” said Capt. Rob Gorta. “It grabbed the fish and yanked it out of my hands. It was just an intense moment for sure.”

Captain Gorta said the rare experience happened back in early June while he was on a $1,200 tarpon charter for a regular customer who books him every year off the Manatee County coast. Gorta just got around to posting the video to YouTube on Thursday.

“Just an incredible experience,” he said. “I’ll never forget it for the rest of my life and I was lucky enough to capture it on GoPro video.”

Gorta said the tarpon was about 180 pounds. The fishing guide estimates the hammerhead was 14-feet long and weighed more than 1,300 pounds.

“Sharks that large have been caught and documented,” said Gorta. “When a giant hammerhead comes around that’s rare for sure.”

Gorta said he felt bad for the tarpon but because of its size, he could not rescue it from the shark.

“We don’t want to drag a fish that big in and risk getting knocked into the water where a monster shark is swimming around us, number one,” he said. “Number two, it’s a state law that you cannot lift a tarpon over 40-inches out of the water.” Capt. Rob Gorta caught a giant hammerhead shark on video taking a big tarpon from his hands as he tried to unhook the fish. (Josh Rojas/Spectrum Bay News 9)

The video shows the hammerhead circle the boat and patiently waiting for Gorta to get the hook out of the tarpon’s mouth.

Once the fish is released, there’s splashing on the top of the water. Beneath the surface, the shark can be seen swimming away with the tarpon in its jaws and leaving scales behind in the water.

“The shark definitely knew that the tarpon was weak,” said Gorta. “And was just… waiting for its moment for sure.”

Captain Gorta said the best time to fish for Tarpon in the Bay Area is during May and June.