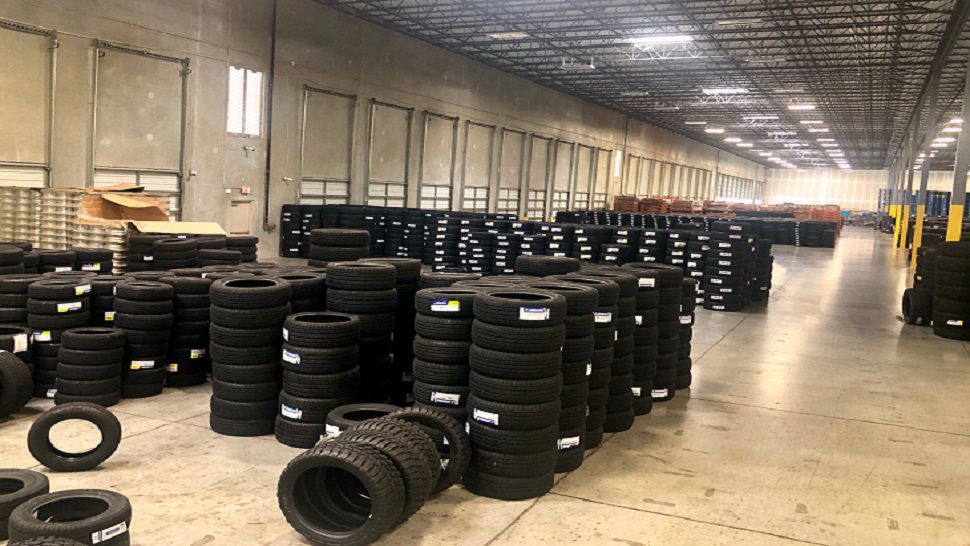 The the United States federal government increased the tariffs on tires to 25 percent, and then added an additional countervailing duty on truck tires of 42 percent. That’s not including the steel tariffs placed on rims. (Stephanie Claytor/Staff)

It has a warehouse in Orlando that supplies tires to more than a thousand retailers across the state. The company’s general manager said the tariff increase has him wondering how he can keep the business afloat.

William Yi opened a massive warehouse back in 2017. The dream was to expand the brand to the United States, by importing the company’s tires made in China.

Then the United States federal government increased the tariffs on tires to 25 percent, and then added an additional countervailing duty on truck tires of 42 percent.  That’s not including the steel tariffs placed on rims.

So much so that he’s stopped importing tires from China.

If he’s unable to import tires from other countries, he said he only has enough tires in the warehouse to last until the end of the year.

“How can we pay for the employees? Pay for the warehouse, if we don’t have tires to sell? Yi questioned.

He said he had 13 American employees.

“For me I even could not sleep at night,” Yi said. “I invest so much money . More than 10 million dollars here in the United States so I have no idea where to go, to close the company or continue,” Yi said.

“By Trump raising higher tariffs or at least trying to cause China to change some of its practices, he’s hoping to bring back some of those manufacturing jobs and benefit his constituency,” Professor Patrick Newman explained.

Newman said the Trump administration wants China to buy more American agricultural products and other goods such as airplanes. He said President Donald Trump also wants China to rely less on their state owned enterprises and to be more open to foreign direct investment.

He doesn’t expect the trade war to end anytime soon; perhaps not until after the 2020 election.

That’s not good news for retailers like Express Tires and Wheels, which is also impacted. The company’s owner buys Rhino Tires and sells them to his customers.

Owner Cesar Jimenez said he’s paying about 20 percent more for tires, but has only increased his prices by about ten percent. Still, some customers have taken notice.

“Now people are just looking for one new tire or a used tire because they cant’ afford the whole set anymore,” said Cesar Jimenez.

He said the change in customers’ behavior has reduced his profit margin thus harming his family.

“There’s less money for school supplies, you know. For taking out the kids on a vacation. Sometimes we have to wait a little bit longer to take a vacation because the money is not all there as we expected it to be,” Jimenez said.

In the meantime, Yi said he’s now importing tires from other Asian countries to try and keep the business afloat and soften the blow to his customers.