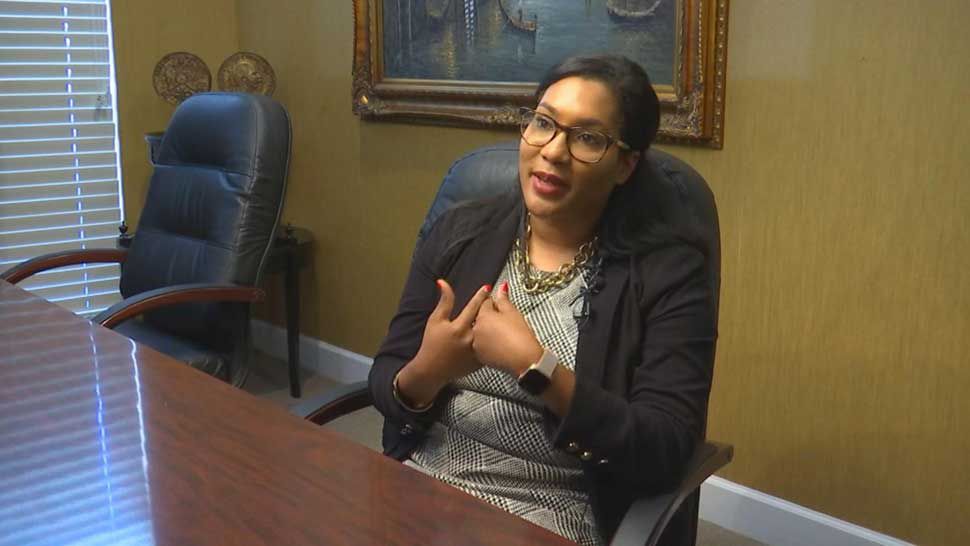 Lauren Springfield talks about the attack on her son, a seventh-grade student at Blake Academy in Lakeland, Thursday, Sept. 12, 2019. (Stephanie Claytor/Spectrum Bay News 9)

LAKELAND, Fla. — Polk County Public Schools Superintendent Jacqueline Byrd apologized Thursday to the parents of a seventh grade student who was beat up in the locker room at Blake Academy in Lakeland Tuesday while other students filmed the beating.

Byrd said the district was investigating the incident.

“I will tell you that the teachers are supposed to be insuring all students are safe when they’re in their care. We’re investigating the teacher and discipline will follow as well,” said Superintendent Jacqueline Byrd.

The mother of the child who was attacked, Lauren Springfield, said she was unaware of the full extent of what happened until her neighbor shared videos of it with her.

"Our HR department is investigating this incident, and will be looking into such questions as part of their review. Any possible discipline is pending based on the outcome of the investigation.

"We cannot comment on a specific student’s safety plan because of state and federal privacy laws protecting students and families. In general, there are a variety of measures and methods that schools can use to resolve issues, deescalate situations and keep students safe.

I can say that, in this situation, the school is still developing a safety plan, and the school will communicate this with the student’s parent."

The video shows Springfield’s son being kneed and falling to the ground, and then being punched while holding his head. Springfield called the video nauseating.

“As a parent you would hope that you taught your child enough to make sure you’re defending yourself," she said. "It was sad for me to watch him not fight back, because he did not once raise his hand.”

She also said she received three videos of the attack and believes the attack went on for three minutes.

School district officials said a teacher was not in the room but "in the vicinity."  Springfield later posted on social media later Wednesday that she had learned exactly where the teacher was relative to the fighting. Screenshot showing Facebook post by Lauren Springfield sharing information about the attack on her son at Blake Academy.

The school district has not confirmed the information Springfield shared in her post.

Springfield said her son had a swollen eye and a knot on his forehead afterwards. She believes the outcome could’ve been much worse considering her son was born with only one kidney.

“Anything could’ve happened. He could’ve passed out and they could’ve left him there. He could’ve hit his head really hard, harder than it was hit," she explained. "We could be having a whole different discussion, and again that is the main point here: What are the safety plans put in place for our kids?”

Springfield said her son is an honor roll student and very kind. She said the only thing her son told her was that he was in algebra class and going back and forth with another student about being short.

The next thing he knew, he was being attacked in the locker room.

Byrd said the student who attacked Springfield’s son has been issued a 10-day suspension and charged with misdemeanor simple battery.

Springfield felt the alleged attacker should be expelled.

School district officials said the other students involved have been suspended as well, but didn’t disclose for how long.

Springfield said she’s hired an attorney and is weighing her options.

Her first concern is that the state attorney takes this case seriously and doesn’t send it to a diversion program.  She’s demanding a full investigation and that the alleged attacker be held accountable.