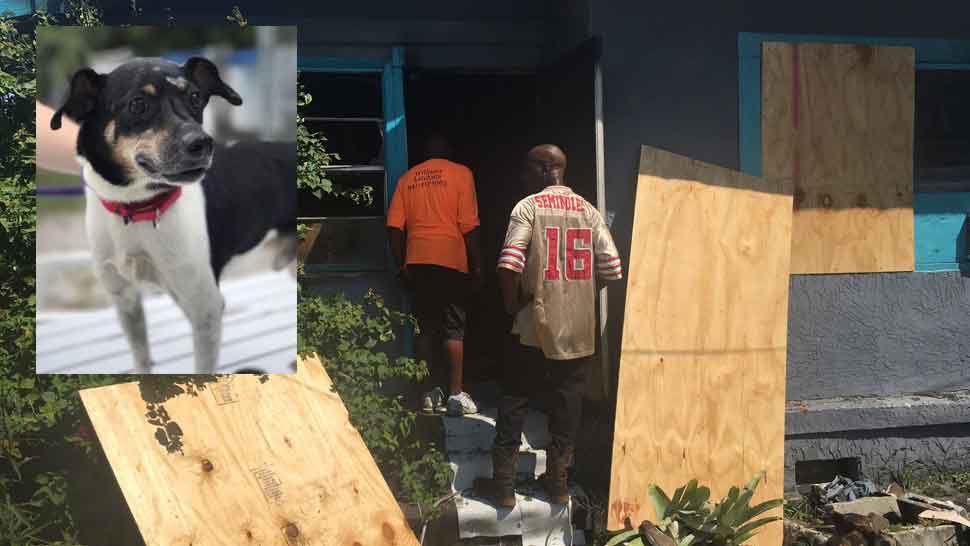 Main photo: Homeowner Leroy Butler tries recover what his family can salvage from their fire-damaged Bradenton home; Inset: Zippy, the Jack Russell terrier whose barking alerted Butler's family to the fire in the middle of the night and helped save their lives. (Melissa Eichman/Spectrum Bay News 9, Humane Society of Manatee County)

Bradenton Family Mourns Family Dog that Helped Save Them From Fire

BRADENTON, Fla. — A dog once rescued from a Manatee County animal shelter helped rescue his human family from a fire early Tuesday morning. Sadly, the dog didn't survive the fire.

Leroy Butler was at home when his parents' house on the 700 block of 15th Street East went up in flames. He said Zippy, the family dog, helped alert them to the fire.

“The fire alarm was at the low beep and then Dad went to yelling and the dog was already barking,” said Butler.

"The floor was on fire," Butler went on. "See, it was on fire once I went and got the kids,” said Butler. “I'm running through fire trying to get them out of there."

Butler described a harrowing scene, trying to get his family out as the house disintegrated around them.

"By the time we got from the hallway door to the kitchen right here, that whole ceiling dropped,” he said. “It went black and flames come out the roof and all the windows start blowing out."

Butler was able to get his family out, and once he found a phone he called 911. Unfortunately, Zippy didn’t get out with them.

"Zippy was just a little Jack Russell terrier, a little black and white dog we adopted 3-4 years ago and he's just been the house pet," said Butler. "He was real helpful and we're going to miss him."

Fire inspectors with Bradenton Fire Department were at the scene Tuesday. They say it appears the fire started in the attic near the air conditioning.

As the house is boarded up, this family is left sorting through charred belongings.

"We just got to start from the ground up again," said Butler. "Got to rebuild."