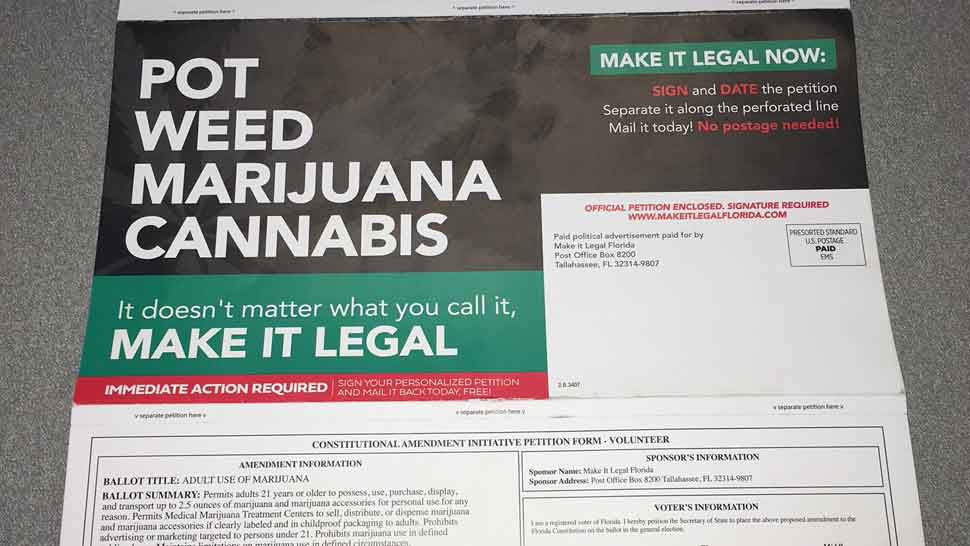 Sample of petition mailed to Florida voters by Make it Legal Florida, a group campaigning for a constitutional amendment legalizing marijuana for recreational use.

“Make It Legal Florida” mailed petitions to Florida voters this week, asking their support for a constitutional amendment to legalize the drug for personal use. The goal is to get the measure on the November 2020 ballot.

“We saw public and private polling showing that folks 21 and over want to have the ability to experience cannabis as part of a normal product that they would buy like you'd buy anything in a CVS and retail store,” said Nick Hansen, chairman of Make It Legal Florida.

If recreational weed became legal in Florida, it will be highly regulated, only sold at dispensaries and medical centers and will be only available to consumers 21 and older.

“It's almost like drinking alcohol or something else,” said Jordan Meservey, owner of Tampa Bay Hemp Co, a cannabis oil shop in Largo, who supports the amendment. “You have an age limit to it, you follow all the guidelines and then you keep it like that.”

But Ellen Snelling, a substance abuse prevention volunteer who lives in Temple Terrace, says that's not a selling point. She opposes legalizing marijuana for recreational use.

“Legalizing it doesn't keep it out of (children’s) hands,” said Snelling. “It'll just be another issue where we'll have to work even harder to make sure they don't use marijuana because it'll be more available.”

Snelling’s daughter started using marijuana when she was 15 years old. Now 37, she's in recovery after years of addiction to cocaine and opioids.

Snelling is gearing up to make sure weed does not become legal on a recreational level here in Florida.

766,200 signatures are needed for the measure to get on the statewide ballot. Two other groups are also launching similar campaigns for legalized recreational marijuana.