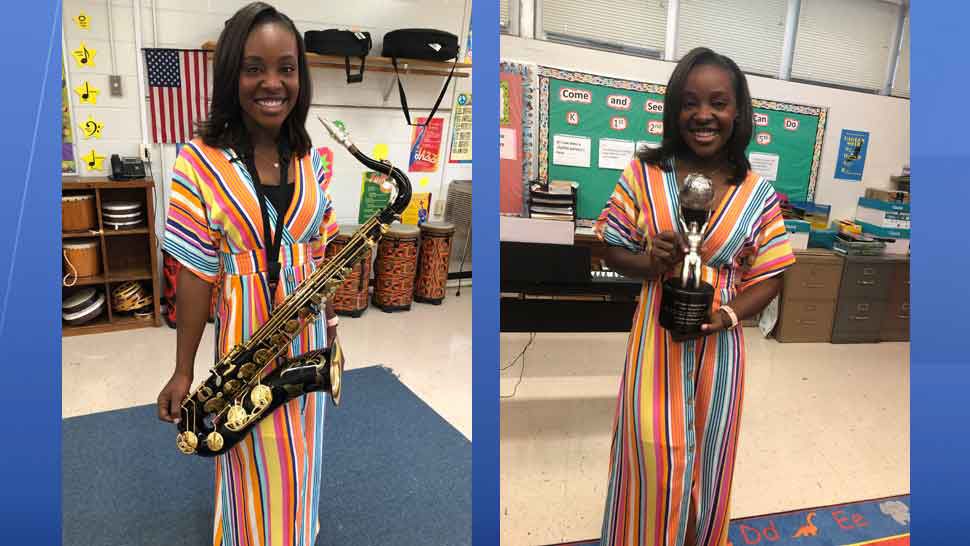 LAKELAND, Fla. — Lakeland music teacher and NAACP Image Award-winning jazz artist Jazmin Ghent will be bringing her musical talents to Clearwater this week — one more engagement in what's become a whirlwind schedule for the talented educator.

Ghent teaches music at Crystal Lake Elementary in Lakeland. On the weekends, however, she’s likely on a stage playing her tenor saxophone at jazz concerts around the world.

“This past year, it’s been every weekend," Ghent said. "I know next week I have four performances coming up back-to-back, so it’s definitely, it’s a hustle."

In March, she won an NAACP Image Award for Outstanding Jazz album for “The Story of Jaz.” She called the win a complete surprise.

“It’s so important to think big," Ghent said. "I say that to my students. Just like I’m playing music and traveling, you guys can do the same thing."

Today’s story is about #jazminghent She’s an @naacpimageaward winning jazz artist & a music teacher in Lakeland. I visited her class to hear about her new CD & upcoming trip to play in an international jazz festival in Haiti.She’s performing in Clearwater Thursday. #BN9Polk @BN9 pic.twitter.com/KYH4pCsAVL

Ghent was unable to attend the awards ceremony because she was on a two-week cruise in Australia performing with Grammy-nominated jazz artist Dave Koz.

Her single “Amends” is currently number seven on the Billboards smooth jazz chart.

She recently was invited by the Haitian Embassy to perform in the country’s Port-au-Prince International Jazz Festival in January 2020.

“After I play for that, then I’m going to be doing workshops at universities and schools so we’ll be all over Haiti. I’m so excited,” Ghent said.

She said she's working on a new CD that will come out in 2020, and a new Christmas song that will be released in November.

But before all that, you can catch Ghent performing at the 40th Clearwater Jazz Holiday in Coachman Park on Oct. 17 at 3:45 p.m.