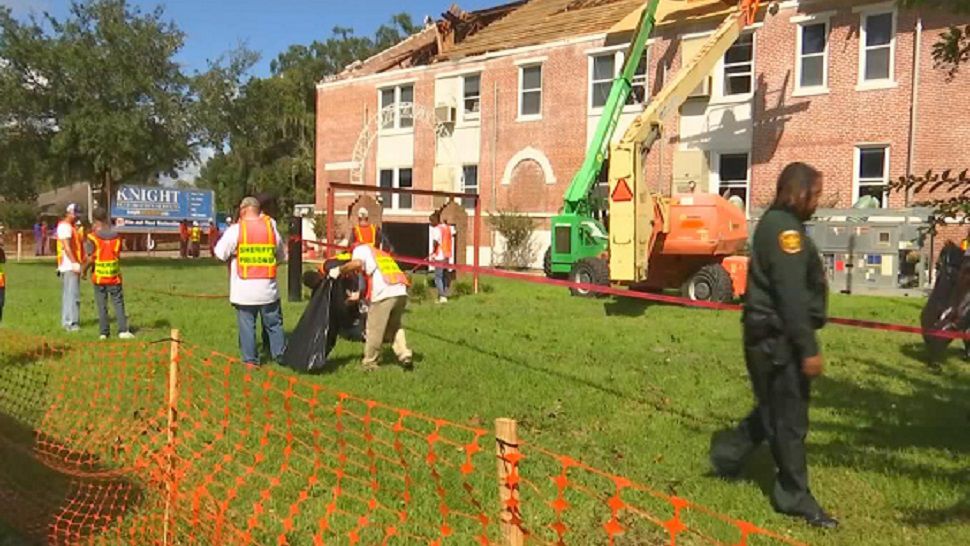 The plan is for Kathleen Middle School students to return Wednesday. That could change depending on if the portable classrooms are up and running. (Stephanie Claytor/Spectrum News)

KATHLEEEN, Fla. — About 14 of the 50 classrooms at Kathleen Middle School were severely damaged, due to a tornado touching down late Friday night.

Pictures taken by Polk County Public Schools Superintendent Jacqueline Byrd show ceiling tiles hanging from the ceiling, debris all over the floor, along with water damage.

"When we opened doors and the flood waters came rushing out at us, and the ceilings are falling behind each step we took, it was scary. We knew it was bad," said Principal Sheila Gregory.

The pouring rain after the tornado made the situation even worse. On top of that, they had a hard time turning off the sprinkler system in the rooms, which comes in handy during fires.

Computer labs and offices were also affected. The historic building on campus that  was damaged by the tornado is where the eighth grade classrooms were housed. Those classes will be held in portable classrooms. The rest of the buildings on campus remained in good condition.

"It's devastating, but like I tell everybody, this is Kathleen.  We are strong. We have gone through a lot in the last five years that I’ve been here and we’re going to conquer this like we conquer everything else," said Gregory.

In 2015, the school received an F letter grade from the state, and then two subsequent D's. It was in jeopardy of closing or becoming a charter school. Gregory, staff and the students fought back with everything they had and improved the school's letter grade to a C for the past two years.

Gregory said having the tornado hit the school will set them back a little bit, but she's determined to not let students fall behind in their learning. The plan is for students to return Wednesday. That could change depending on if the portable classrooms are up and running.

The district is bringing in 12 portables. Other schools are pitching in to replace damaged classroom supplies. Scroll below to view a Facebook post with information about you can help.

"So we have a number of schools and a number of agencies I think probably that are out there assisting and supporting us that way. So we are very encouraged by that as well," said Assistant Superintendent John Hill.

Parents are encouraged to watch for news of when school will be back open on social media, and the district's website. The district also plans to send a message to parents.

The school has also set up a GoFundMe account for anyone who would like to help teachers buy news supplies for their classrooms.

This Gofundme.com site is not managed by Bay News 9. For more information on how the site works and the rules visit  http://www.gofundme.com/safety