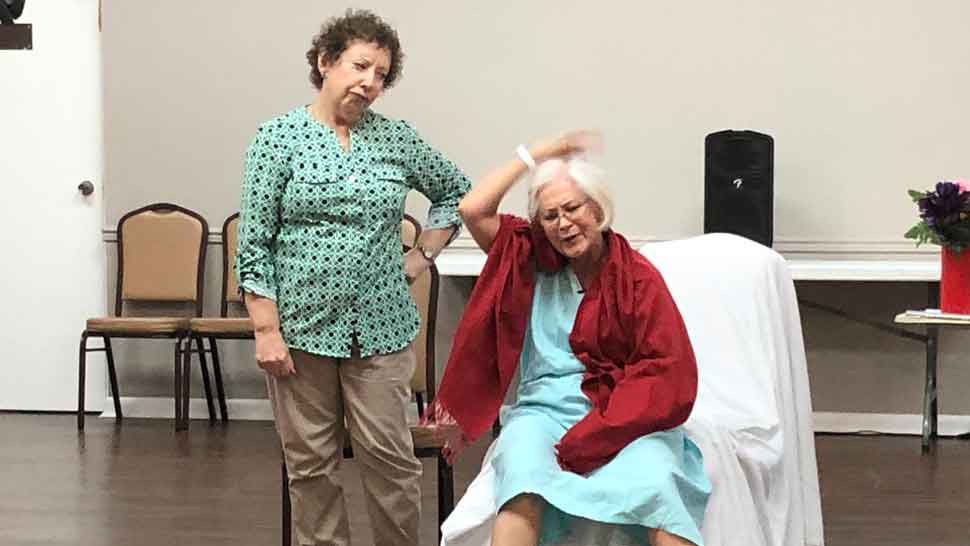 CLEARWATER, Fla. — A Bay area acting group made up entirely of seniors is wrapping up their 2019 season with a final performance in Clearwater on Sunday. Like their other productions, the play aims to do more than just entertain — it spotlights challenges seniors face in real-life in an effort to empower and educate.

Acting your age may just be the heart and soul of the play actors Betsy Clement and Leah Conway practice before Sunday's final matinée.

“So I am little shaky, off balance," said Clement with a prop cast on her arm.

She wobbles up from a hospital bed and then back down.

“They surprise the audience because things happen that are kind of dangerous at times, and when they happen we hear gasps from the audience," said Rick Kastel, another actor.

The show is called "Denying Gravity." Yes, it is play on words.

“I get to do what I love to do, to be on the show," said Kastel. "And delivering a really, really important message. What more could anybody want?”

One look at the cast and it's easy to tell what makes this performance group different. All the actors and even the playwright are seniors.

In fact, the median age on this stage is 73.

They are all a part of an acting group called "SAGES," which stands for Senior Actors Guild and Education Services. The most important part of the title is the 'education services' part.

As Kastel explains, every play they perform hits home in a different way for them and the audience

"It does, it absolutely does," he said. "My next door neighbor fell, one of our cast members fell. I am just seeing more and more of it.”

"Denying Gravity" is a play about seniors falling. It's a topic many in their later years don't normally want to talk about

"One of the things we try to do is, especially in "Denying Gravity," is to encourage using a cane or a walker for balance,” said Goldman.

The play's target audience is, of course, seniors, and at each performance the actors bring in statistics to back up the importance of their message.

“[Falls are] one of our number one calls that we receive across Pinellas County and at all of our fire departments," said Summer Mahr with Largo Fire Rescue.

Often, local firefighters come and make guest appearances on stage. It is just another prop to make the message stick

This play, though, is far from the only one with a message.

The final play this season is on Sunday, Oct. 27 at the Bilheimer Capitol Theater in Clearwater. There is no cost to see the play.