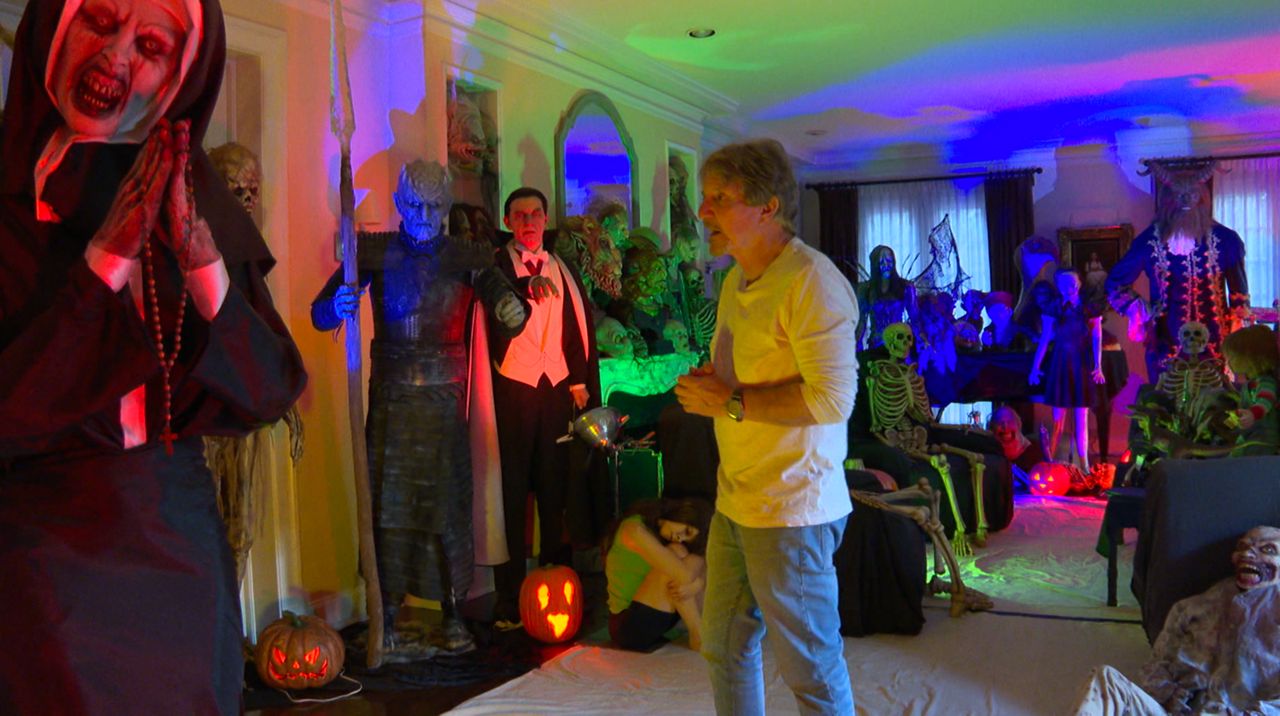 HANCOCK PARK, Calif. – What is it about the Halloween season that seems to bring out the most enthusiastic fans? Richard Correll has been collecting movie memorabilia and screen-used props for nearly 60 years.

Every Halloween his house becomes a museum of the macabre which he shares with his friends and neighbors.

“This is the dining room, at least this is what it looks like during Halloween time,” said Correll.

He walked us through his spacious Hancock Park house, which is now packed with ghosts and ghouls from classic movies like Dracula to more modern fare like Pennywise the Clown from It.

“My wife and I live in a normal house. We don't live in The Addams Family House, but this is what it looks like during Halloween,” he said

Correll said his collection is one of the largest in the world. It includes thousands of pieces, many used on-screen, some replicas, and many custom-made. He started collecting when he was just a kid working as an actor on Leave it to Beaver.

“We were shocked at the stuff they were throwing in the trash,” said Correll. “I saw [Universal Studios make-up department] had a head from a movie called Abbott and Costello Meet Dr. Jekyll and Mr. Hyde. ‘Hey, can I take that!’, and the guy said, ‘Yeah, sure.’ That's what started this, collecting actual screen-used stuff and now I've been collecting for almost 59 years.”

Correll’s collection spans the entire history of movies, but he has a special affection for the classic Universal monsters, like Lugosi’s Dracula and Karloff’s Frankenstein monster.

Being a Hollywood kid, Correll got to meet many of his horror heroes over the years.

“It's funny that the villains always turned out to be the nicest people,” said Correll. “Karloff, in particular, was the furthest thing from a monster you can imagine, always friendly. Vincent Price, same thing. Price always wanted to know about your family and your school. He was just a cool guy. You can sit down and talk to him forever.”

Back in the day, being a collector was a little different, and less competitive than today, as there was not as big a demand for preserving and collecting movie props.

"Universal threw out the [“Gill Man”] from The Creature from the Black Lagoon, the original suit. Stuff got old and they threw it in the trash,” Correll explained looking at his Gill Man replica. “Now at auction, that original suit would be about $1.1 million.”

Not everything in the collection is from the movies, however.

Correll rounds out his collection with a room full of vintage Halloween decorations which are among his favorites.

“This is really, really old vintage stuff dating back to the 20’s,” he explained. “Most of the things you see in this room are really old.”

Correll loves sharing Halloween scares with the neighborhood. He says over 8,000 people usually stop by to check out his yard displays and he hosts a party inside with his closest friends.

Amazingly, all of the stuff here on display is just a small portion of the entire collection. The rest is tucked safely away in a warehouse. Correll said the collection is so large that plans are in the works for a museum to house it, so that he can share this movie history with even more fans.