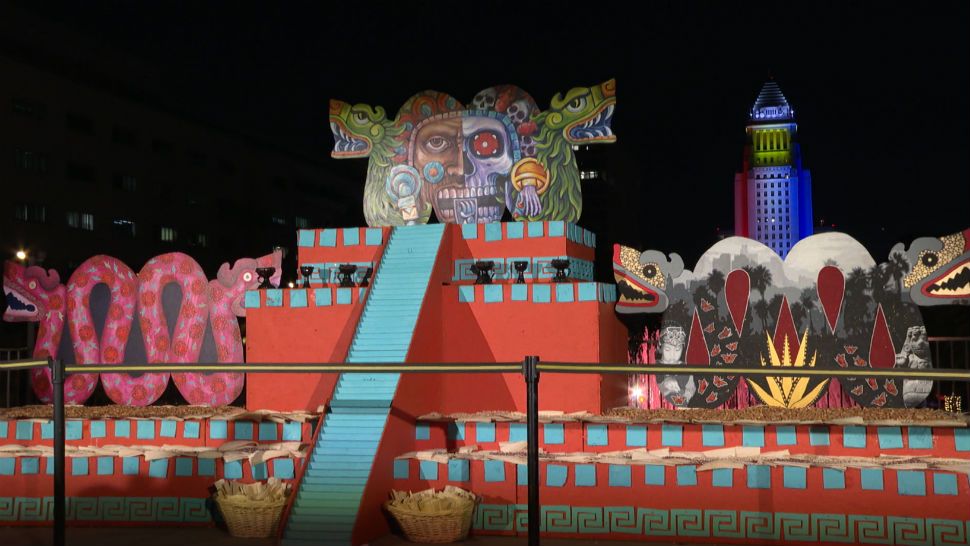 LOS ANGELES – Originating thousands of years ago with the Aztecs and coinciding with the All Saints and All Souls Days of European cultures, Dia de los Muertos is being celebrated at Grand Park with a display of altars from more than 40 local artists and community groups.

Consuelo Flores has been making altars and educating people about Dia de los Muertos for years and was instrumental in helping to bring the celebration to a broader audience here in Los Angeles. As a public observance, “Day of the Dead” largely wasn't adopted in L.A. until the 1970s. As a result of the efforts of “altaristas,” or altar-makers, like Flores as well as organizations like Self-Help Graphics & Art, founded by Sister Karen Boccalero, and Lore Media & Art organizations, which promote the work of LatinX artists, the celebration has become more mainstream over the years.

“Now what we see is a hybrid of the two cultures, the indigenous cultures and as well as the European culture [Roman Catholic] that came in and got mixed,” said Flores.

The tumultuous events of the 1970s had a lot to do with the mainstreaming of the tradition, which is a celebration and remembrance of the dead, not a time for mourning.

“They brought it from the private home into the public sector, to celebrate the people who had died either through the Vietnam War or through the riots against the war,” said Flores.

Over the years, the celebration has also taken on aspects of various social justice movements. Flores’s altar this year includes butterflies made from yellow, lined school paper in a nod to a group of Mexican students that went missing in 2014. The altars at Grand Park run the gamut from tributes to lost pets to those lost to cancer.

Maria was one of the visitors at Grand Park. Her family is from Nicaragua and doesn’t observe the Day of the Dead, but she enjoys living in a city with so many opportunities for cross cultural exchange.

“This is my first year, but I'm glad I'm here though, because it's just part of the L.A. culture, you know, being all inclusive,” said Maria.

While Flores resists the over-commercialization of Dia de los Muertos, the free event at Grand Park, which runs until November 4 is a great way for families to celebrate together.

“There is a symbiotic relationship that we can recognize ourselves in our past, and we can see our future because of it,” said Flores.